The current level two alert has been extended from August 10th to August 23rd. The CECC has made its reasoning for extending the alert known in previous days, but the CECC is opening to dialogue with groups and organizations regarding adjustments. 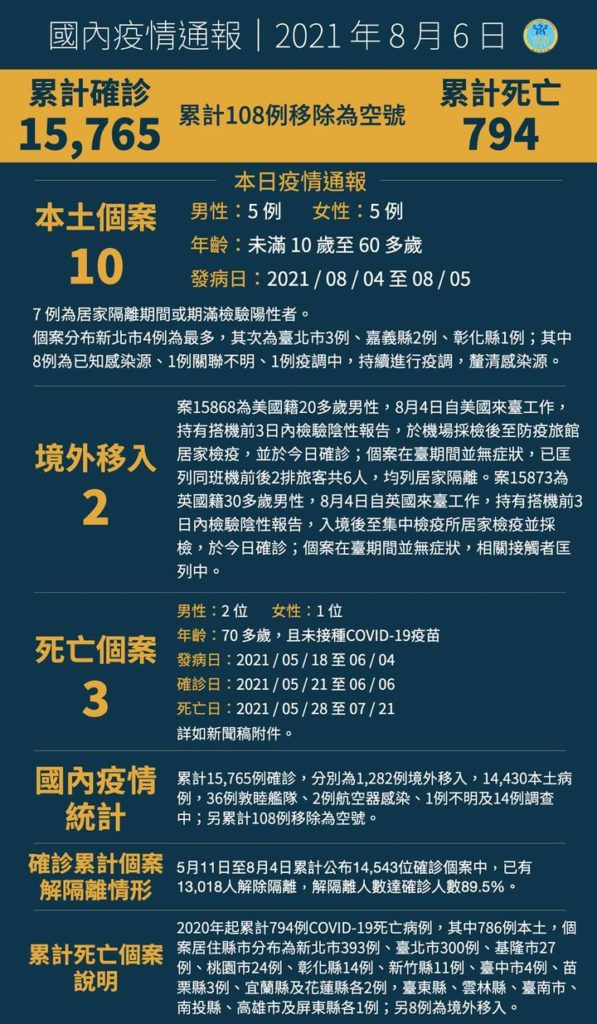 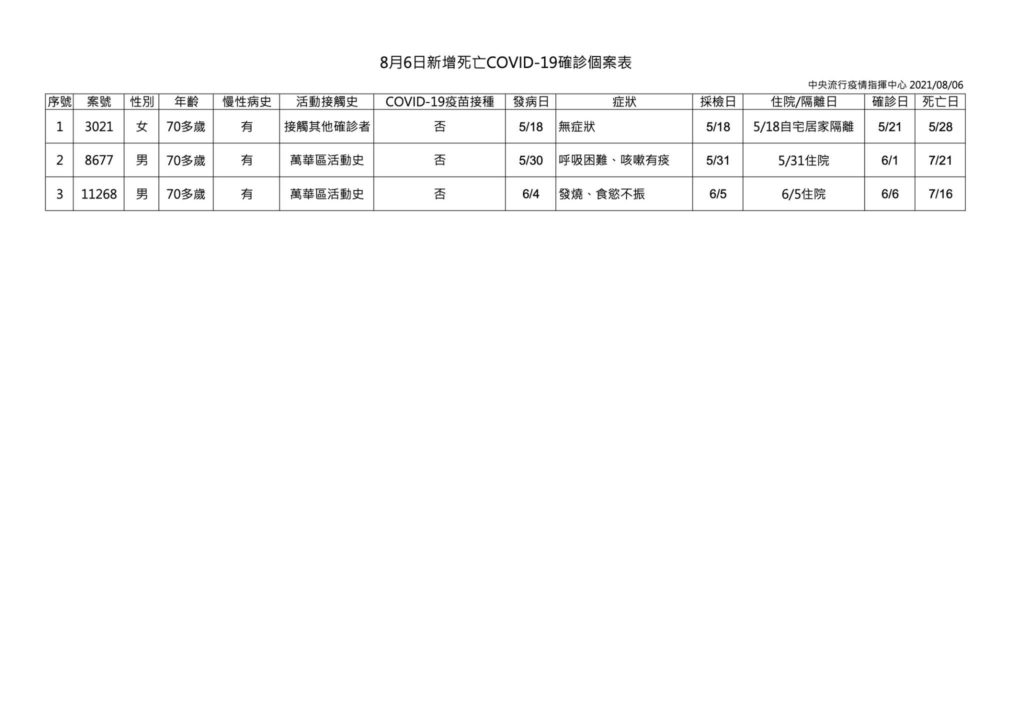 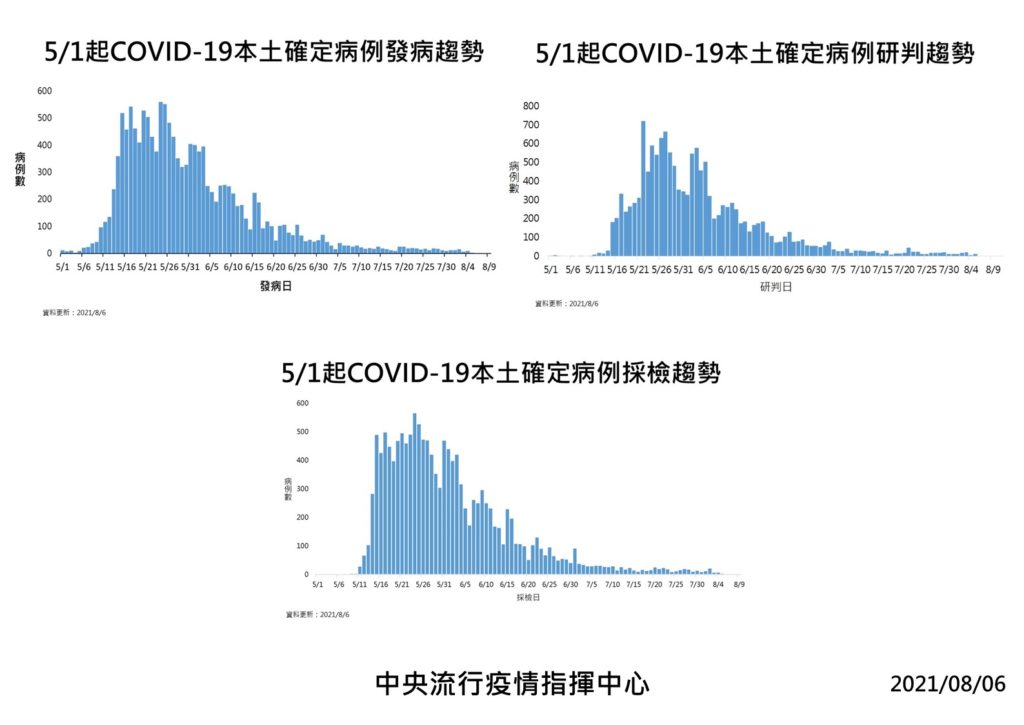 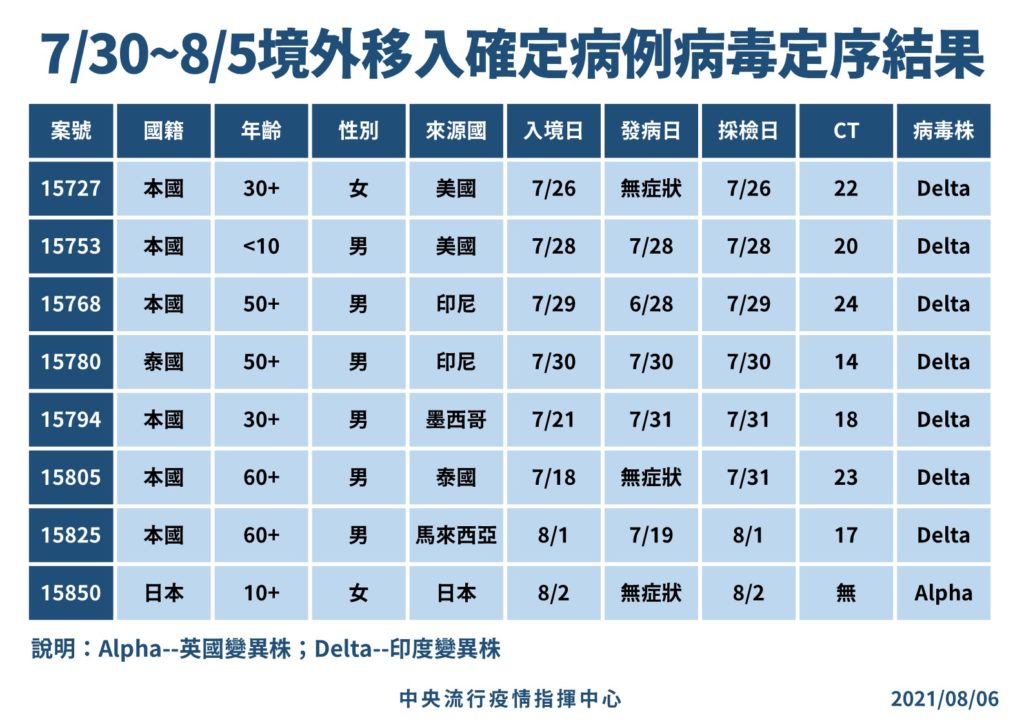 When asked about the uptick in COVID-19 cases in China and possible effects, Minister of Health and Welfare Chen Shih-chung stated that according to the official statistics, the current COVID-19 outbreak in China is limited, given China’s population of 1.4 billion. Nonetheless, China’s strong measures against COVID-19 may be a cause of concern, if this illustrates that the outbreak is larger than currently known. China’s restrictions on travel may limit the effects of the outbreak, but Taiwan has strong transportation links with China due to taishang that travel between Taiwan and China.

Chen stated that there had been some confusion about the “X Man” case, which involved travel history between Taipei and Kaohsiung. The case traveled to Taipei early on in July, but was likely to have been contagious closer to the end of July, with Kaohsiung suspecting that this case may have been infectious for more than three weeks. Taipei did not believe that there was a need for further contact tracing as a result, though Kaohsiung hoped for further details.

The CECC is currently optimistic about reopening the Palau travel bubble.

Swimming pools will be opened up after August 10th, but this is limited to small groups of ten people, there must be thirty minutes between visitors, and disinfections must be carried out. Masks must be worn outside of the water and social distancing must be maintained.

The CECC is allowing for a dual-track system for individuals above 65 years old. Individuals above 65 years old can register through the online registration system. The CECC will provide lists of those with first dose vaccinations to local governments so that they can register those who are unable to use the online registration system and provide aid to those unable to use the system. In such cases, local governments will have to inform individuals about their time and place of vaccination.

When asked by the media about the rate of breakthrough cases in Taiwan compared to the rest of the world, Chen stated that the breakthrough rate is 0.002%, with only six cases so far. However, Taiwan is a low-risk area for COVID-19 and the duration of the outbreak was short, so Taiwan may not make for a good comparison to other countries. 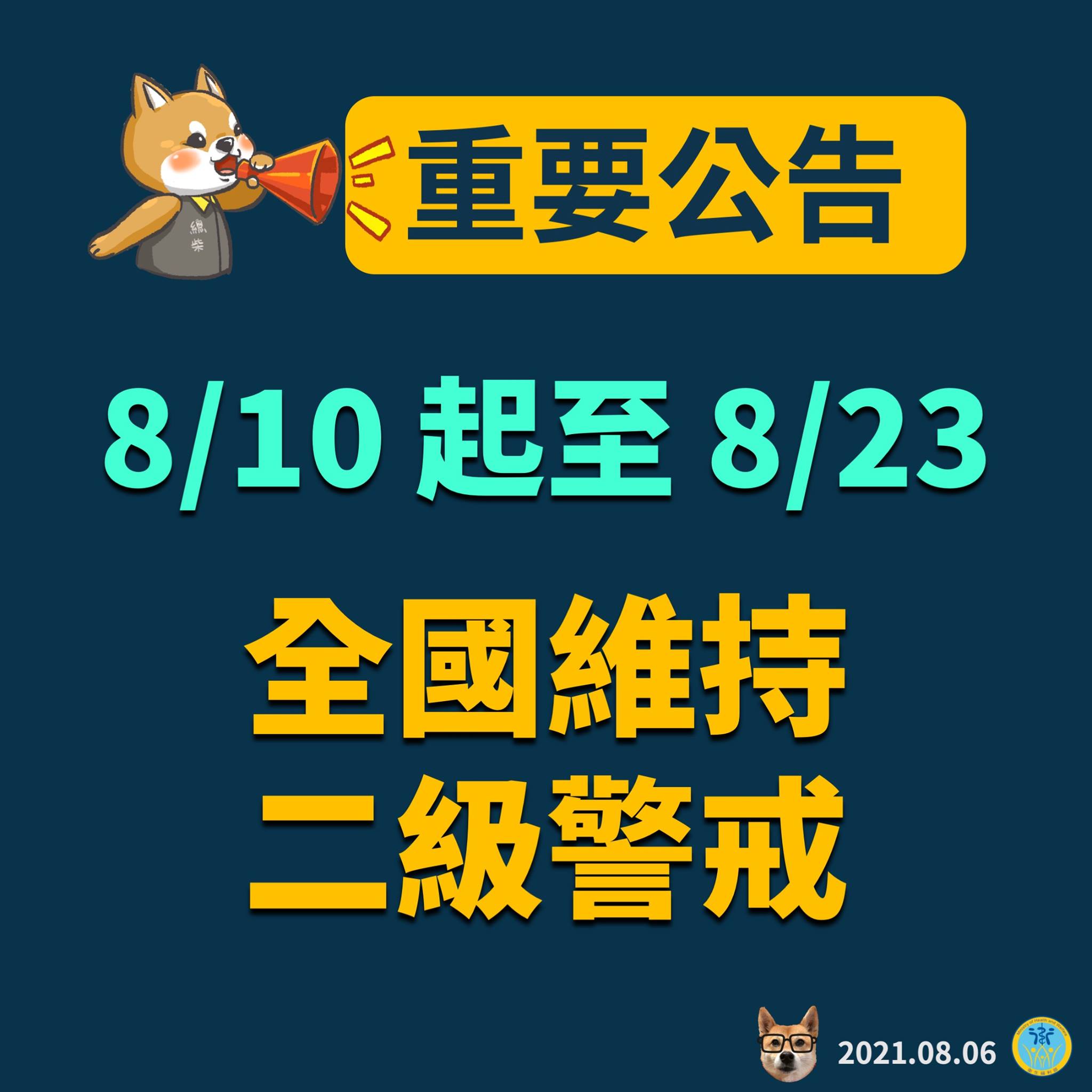 Announcement of the extension of the level two alert. Photo credit: Ministry of Health and Welfare/Facebook

The CECC is prioritizing mixing AstraZeneca vaccines with mRNA vaccines, such as BioNTech, for mixed vaccination.

For second dose vaccination, the CECC may prioritize medical personnel. To carry this out, there is a need to boost vaccination capacity at clinics. There are no plans to introduce new vaccination categories, with plans to use the existing ones and continue expanding eligible age groups.

The CECC will announce what groups are to be vaccinated in subsequent rounds based on supply. It is expected that the fifth vaccination round will primarily be Moderna, while the sixth vaccination round will primarily be Medigen. Of the 22 shipments of Medigen sent out, 4 have been sealed, 8 require further documentation, and 10 are under inspection.

The CECC is sending out these shipments of Medigen for inspection even if they are relatively small quantities. When asked about more than 10,000 changing their vaccination preferences from Medigen, the CECC stated that this is due to the effect of individuals vaccinated with other vaccines in the meantime. It is still expected that Medigen vaccines will begin to be used in the latter half of August.

When asked about reports of 1,800,000 vaccines not sent from Thailand that were originally scheduled to be sent out last month, Chen stated he could not confirm any information, but he will report on vaccine shipments when he does.

When asked about vaccinations in jails, Chen stated that there are difficulties maintaining social distancing in jails and that questions are whether inmates should be brought outside to be vaccinated or vaccinations should take place in jails. Whichever way this takes place should seek to reduce contacts. Chen stated that he did not believe that prisoners should be denied their right to be vaccinated.

The CECC is waiting for policy specifics from the US about plans to close borders to those not fully vaccinated. The CECC will make adjustments when specific policy is clearer.

The CECC believes that some periods in which no vaccinations occur may take place. Namely, the CECC is now spending more time calculating statistics for vaccinations, to prevent issues with distribution of supply, resulting in longer periods between registration and when vaccination begins. It is not thought that this could be as long as one week, however.

There is concern that Father’s Day gatherings this weekend may lead to an uptick of cases. Father’s Day is commemorated on August 8th in Taiwan.

According to New Taipei mayor Hou You-yi, three of the four cases in New Taipei today were already under quarantine. Three cases were linked to a family gathering in Xinzhuang. One case was in Gongliao. New Taipei is waiting for the central government to announce the specifics of economic stimulus vouchers before announcing what economic measures it will add to this.

Taipei mayor Ko Wen-je stated that all three cases found in Taipei were from a family gathering, meaning that their sources of infection were all known. Ko called on members of the public to avoid eating at the same table and wear masks around each other. Taipei has now shifted to holding COVID-19 press conferences on Mondays, Wednesdays, and Fridays. 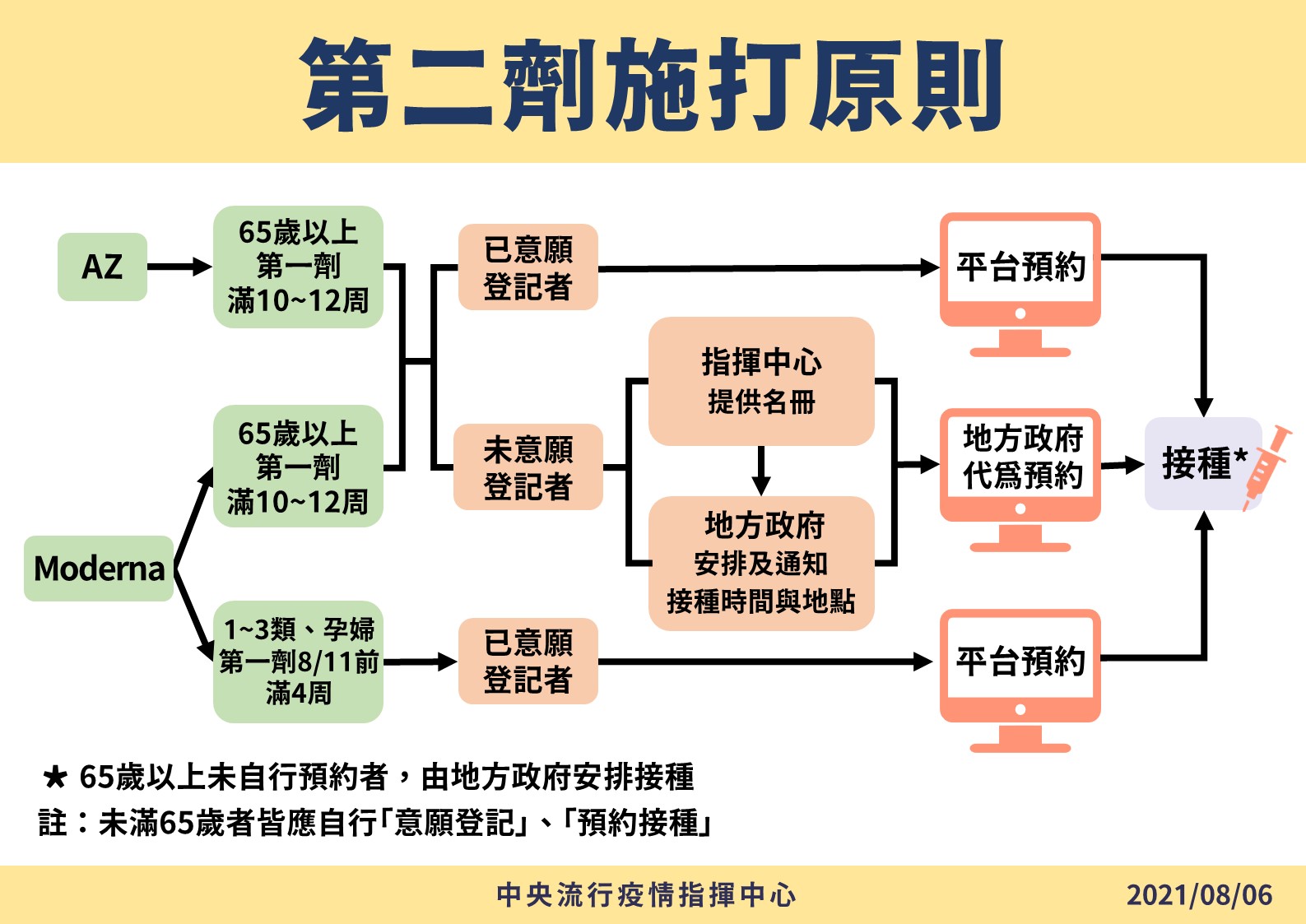 Information about the registration process for second dose vaccination. Photo credit: Ministry of Health and Welfare/Facebook

Regulations on some sports will be loosened after August 10th, such as allowing for table tennis or dodgeball, though dodgeball is limited to two people. Middle school and high school teachers should have mostly been vaccinated by July 29th, while July 27th to August 9th will serve an evaluation period for kindergartens, with 96% of kindergartens having set up barriers for meals.

Taipei intends to use the first two weeks after indoor dining was reopened to monitor the situation, before deciding whether to further relax measures. Ko denied reports that tea parlors in Wanhua will be allowed to reopen in September without hostess service, stating that the city government maintains measures on tea parlors, karaokes, and bars with hostess service. Even if tea parlors are registered as eateries or other establishments, the same measures apply.

Taipei is considering whether to adhere to the stimulus vouchers rolled out by the central government or to go its own way. The Taipei city government also intends to convene experts to discuss third dose vaccination, vaccination passports, and other measures, indicating that Taipei may attempt to challenge the medical authority of the CECC. Ko otherwise attacked the DPP on vaccines, claiming that the DPP was preventing internationally recognized vaccines from entering Taiwan to benefit Medigen, and claiming that the DPP favors Medigen over United Biomedical, among domestically manufactured vaccines.