20 DOMESTIC CASES and one imported case were announced by the Central Epidemic Command Center (CECC) at its daily press conference today. Sixteen of these cases were already in quarantine.

Lower vaccinations took place yesterday, with 86,554 vaccinated yesterday. Vaccination coverage is currently at 34.41%, which increases to 36.19% per 100 people. The vaccination rate has notably declined due to lower supplies of vaccines. 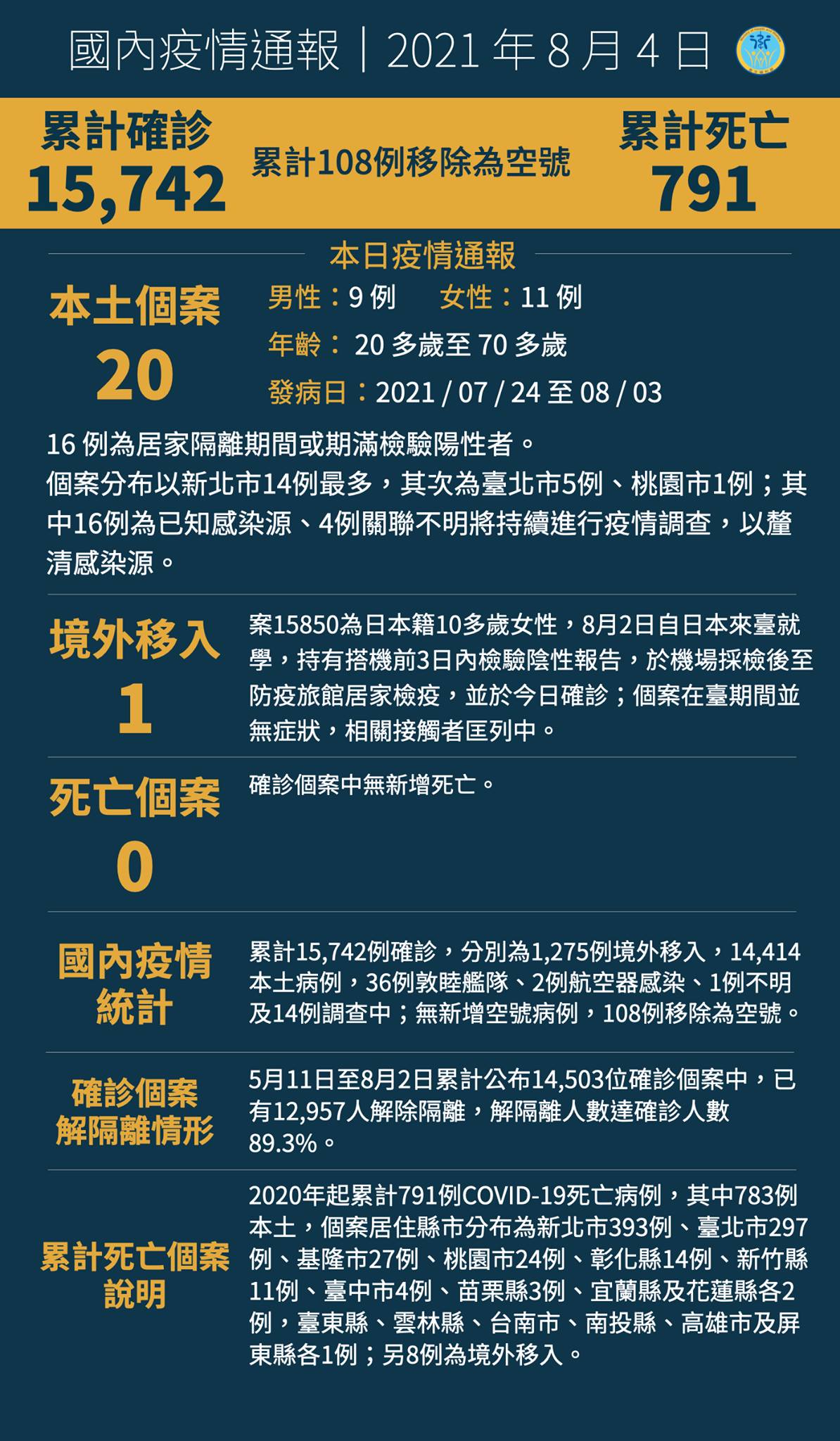 Numbers for shipments of Medigen currently do not have to do with willingness to be vaccinated with Moderna. Four shipments are sealed, ten are in inspection, and further information has been asked for eight shipments. Minister of Health and Welfare Chen Shih-chung stressed that the request for further information is routine and has to do with clarifying the facts about shipments. The number of shipments of Medigen does not have to do with the willingness to be vaccinated with Medigen.

When asked about accusations that 100,000 vaccinated through special projects being a form of vaccine privilege, Chen Shih-chung stressed that this included frontline medical workers and other personnel.

It is hoped that groups can register through the vaccine registration system for vaccination.

Tea eggs will continue to not be available at convenience stores, due to the inability of stores to have a specific worker to handle distributing them to customers.

Professional athletes can use swimming pools for practice when needed. While there are plans to re-open swimming pools, specific regulations must be drawn up with the Ministry of Education. Crowd control measures, regular disinfections, and QR code registration must take place.

According to the CECC, new cases in Tokyo are mostly the Delta variant and may have to do with insufficient rate of vaccination. Likewise, though cases are on the uptick in China, this does not appear t\o be on the scale of in the past, but that the CECC was monitoring the situation.

There were 129 adverse reactions to vaccines yesterday, 81 were non-serious, while there were seven deaths after vaccination, and 41 other reactions. Six deaths were after AstraZeneca vaccination and one death was after Moderna vaccination.

When asked about former Taipei mayor Hau Lung-bin of the KMT filing a lawsuit to overturn EUA for Medigen, Chen Shih-chung stated that the CECC would respect relevant legal processes, but that this should not prevent people from being vaccinated.

Vaccines will be opened up to individuals above 18 years old when there is sufficient supply, with the CECC planning on opening eligibility downward. 150,000 vaccines will be available for teachers to use, continuing plans to vaccinate all teachers before the start of the semester.

Chen stated that it was not outside of expectations for there to be some periods with low supplies of vaccines. Chen stated that understood the displeasure of local governments and that there will be more time allowed on the vaccination registration system.

There are no plans for large shifts in the alert level before August 9th, with the Executive Yuan having stated that it will make a decision about how to adjust measures before August 10th. This may incorporate feedback about the opening up of pools or regarding tea eggs.

Chen further stressed that the total number of vaccines that Taiwan has purchased is sufficient, but that there have been delays regarding their shipment to Taiwan

According to New Taipei mayor Hou You-yi, thirteen out of fourteen cases today were already in quarantine. Seven cases were in Xinzhuang and five cases were in Banqiao. Yesterday saw ten cases, reflecting that New Taipei has seen an uptick of cases in the last two days. These largely consist of eight cases from a household cluster and ten cases from a hospital cluster. Seven members of the hospital cluster were already vaccinated.

20 were listed as contacts for the family cluster, with 17 in home quarantine, and nine PCR tested. One positive has been found so far. A worker at a department store was also found to be positive, resulting in 521 tests carried out, which were all negative. New Taipei downplayed the possibility of infection among migrant workers living in dorms who work at hospitals in connection to the hospital cluster, since they are mostly vaccinated.

Hou stated that New Taipei is evaluating overall trends, as a result of which the present uptick in cases has not led to a suspension of indoor dining or similar measures. Hou urged vigilance otherwise, commenting that around 50% of restaurants reopened for indoor dining yesterday and 50% remained closed, and this seemed to be consistent today, with only half of breakfast stores reopening.

According to Taipei mayor Ko Wen-je, two of the five cases found today in Taipei were already in quarantine. Nevertheless, there were two cases with unknown sources of infection. Ko stated that he was more concerned about the cases with unknown sources of infection, indicating transmission chains that have not yet been caught. Ko touted the willingness to comply with COVID-19 measures of the Taiwanese people as reasons as to why the situation was under control, such as claiming that individuals were not mandated to quarantine at home, but that 99% of individuals willingly went to quarantine facilities.

Ko has emphasized that the first two weeks since the reopening of indoor dining will be an important evaluation period as to the relaxation of measures, commenting that he was nervous, and also worried about establishments such as a-gong-diam reopening. Ko announced that hospitals would set up clinics for monitoring long-term effects of COVID-19 on patients, commenting that follow-up testing often picks up old cases. Legislator Chiang Wan-an of the KMT has also called for more measures for long-term COVID-19 patients in recent days.

New measures will be rolled out for COVID-19 cases in public areas in Taipei going forward. If a COVID-19 case only briefly travels through an area, there will only be disinfection followed by a twenty-four-hour closure. If travel was three days prior, only disinfection will be carried out, with the view that COVID-19 cannot stay in an area beyond 72 hours.

Taipei is to vaccinate 86,661 from July 30th to August 3rd and 55,341 from August 4th to August 6th. Taipei claims that there was insufficient supply of vaccines, requiring rearrangements from hospitals, but that through the hard work of the Taipei government, Taipei was eventually able to receive enough vaccines from the central government. Ko also called on Kaohsiung mayor Chen Chi-mai to clarify the facts about a case with significant travel history referred to as “X Man” in the media. 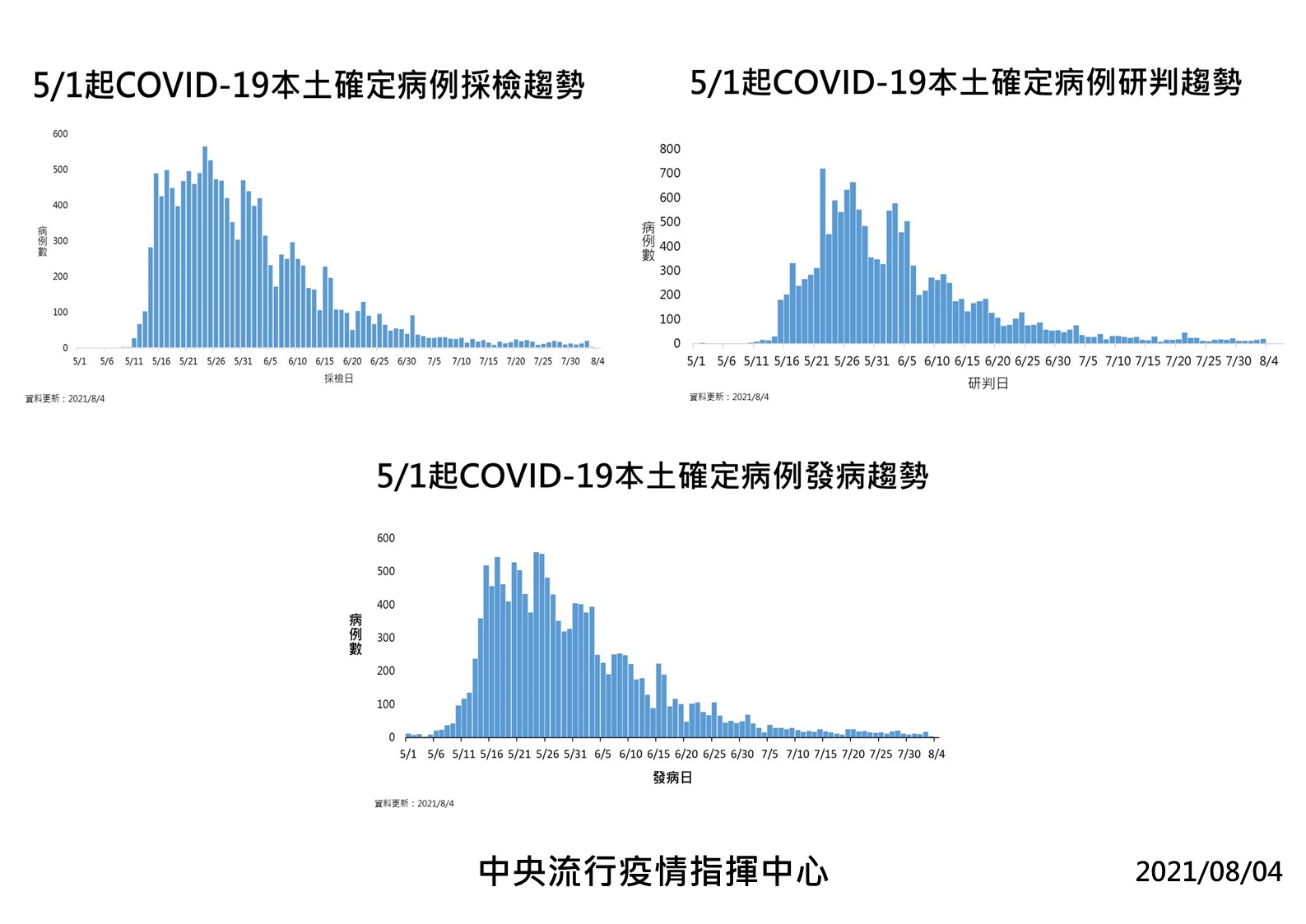 Further data from the CECC. Photo credit: Ministry of Health and Welfare/Facebook

Ko attacked the central government regarding several of its measures today. Although Ko stated that the CECC could arrive at an expert opinion regarding reopening swimming pools and seemed to accept its authority on the matter, Ko claimed that the example of other countries showed that stimulus funds could be distributed through electronic means rather than paper vouchers, touting the ability of the elderly to learn how to use new things—this despite frequently attacking the online vaccine registration system as beyond the ability of the elderly to use.

As a result, if Taipei adds additional stimulus funds to what is distributed by the central government, this will likely take place by electronic means. To this extent, when asked, Ko took the opportunity to claim that the central government had a strange system of cash prizes for Olympics athletes and that Taipei would seek to develop its sports industry.

Otherwise, much of Ko’s criticisms revolved around vaccines. Ko claimed that only sub-Saharan countries had lower rates of vaccination than Taiwan, a factually untrue claim, and claimed that the DPP should be faulted for lacking vaccine supply. Ko also criticized the process for approving EUA for Medigen, claiming that the regular people would remember the DPP’s record on the matter. Ko declined to give a specific answer when asked about calls by Hau Lung-bin of the KMT for local governments to defy the central government and refuse to carry out Medigen vaccinations. It is to be seen whether pan-Blue local governments carry this out.