When questioned about the uptick in cases in the past two days, Minister of Health and Welfare Chen Shih-chung stressed that overall cases were still declining, but that this drives home the need to avoid crowds, continue testing, and continue contact tracing. 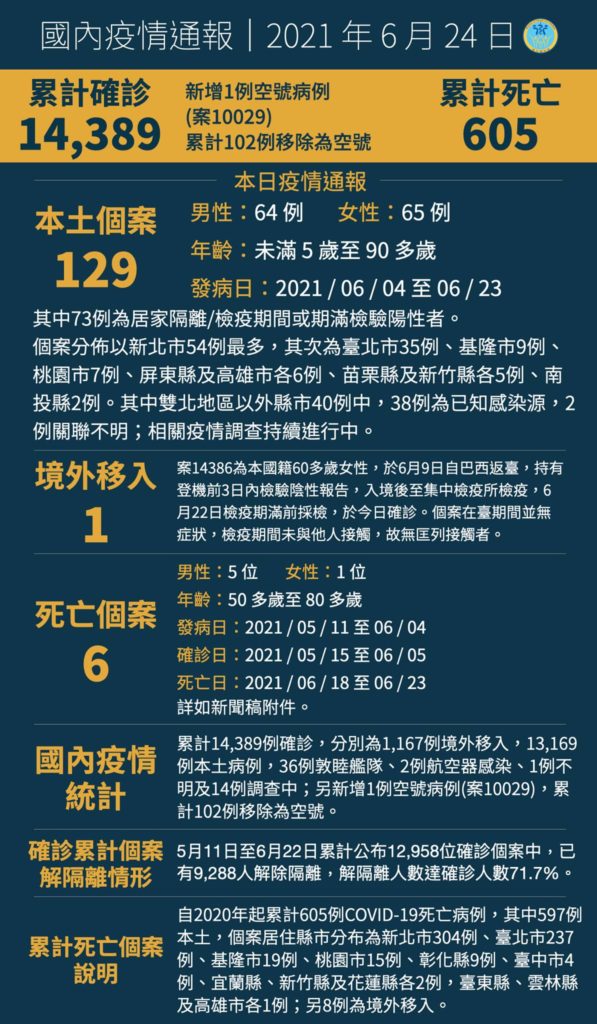 Information on the new cases released by the CECC today. Photo credit: Ministry of Health and Welfare/Facebook

With a cluster having broken out at the Taipei Agricultural Marketing Product Corporation (TAPMC), where 30,000 people pass through per day, there has been concern about lax contact tracing by the Taipei city government because of Taipei mayor Ko Wen-je stating that he hoped to vaccinate TAPMC to avoid the hassle of testing workers. With the CECC expressing concern over crowds that could gather while waiting for the results of rapid testing, Ko Wen-je has hit back against the CECC’s proposal to instead use PCR tests by claiming this is too expensive. Ko stated today that due to the high false positives from rapid tests, Taipei will slowly shift to PCR tests.  TAPMC has seen 54 infections since May, though Ko continues to downplay the severity of the incident.

Taipei mayor Ko Wen-je met with Minister of Health and Welfare Chen Shih-chung, the heads of the department of health for Taipei and New Taipei, and Council of Agriculture head Chen Chi-chung, and the head of TAPMC yesterday night. The meeting has received a great deal of attention because Ko has otherwise insisted that the situation at the TAPMC is under control.

Two sixteen-year-old nursing workers were vaccinated in Kaohsiung, apparently after accidentally having been put on the eligible list for vaccinations. As violations of the vaccine priority order continue to be a sensitive political issue, there have been criticisms of the Kaohsiung city government after the incident. Individuals under eighteen are not eligible for vaccination, raising questions of why they were vaccinated. The Kaohsiung department of health has apologized for the incident.

New Taipei mayor Hou You-yi visited the Anxin Hotel today, where 202 homeless people are currently staying in Banqiao today. Hou emphasized in comments that the homeless should not be left out of measures to prevent the spread of COVID-19. According to Hou, thirteen cases in New Taipei today were linked to TAPMC, while the rate of infection at testing sites in New Taipei is 1.0%.

The Executive Yuan is expected to pass further financial relief measures today. The new measures will provide 100,000 NT to family members of those that die from COVID-19, as well as 10,000 NT subsidies to individuals making less than 23,100 NT because their work hours have been affected by the outbreak. The Executive Yuan is also again granting 100,000 NT loans for those that qualify, after previously suspended applications because too many people applied, with 1.1 million applicants, far exceeding the quota of 500,000 applications.

Following the extension of the current level three alert, the Ministry of the Interior has reemphasized that all public ceremonies are currently suspended and that national parks are closed.

News reports indicate that Ting Shou-chung of the KMT has been vaccinated, despite not being on the priority list for vaccinations. Ting has been criticized for this by the DPP, particularly because Ting called for the use of Chinese-manufactured vaccines in Taiwan, but this evidently did not prove any obstacle for Ting in getting vaccinated with AstraZeneca. 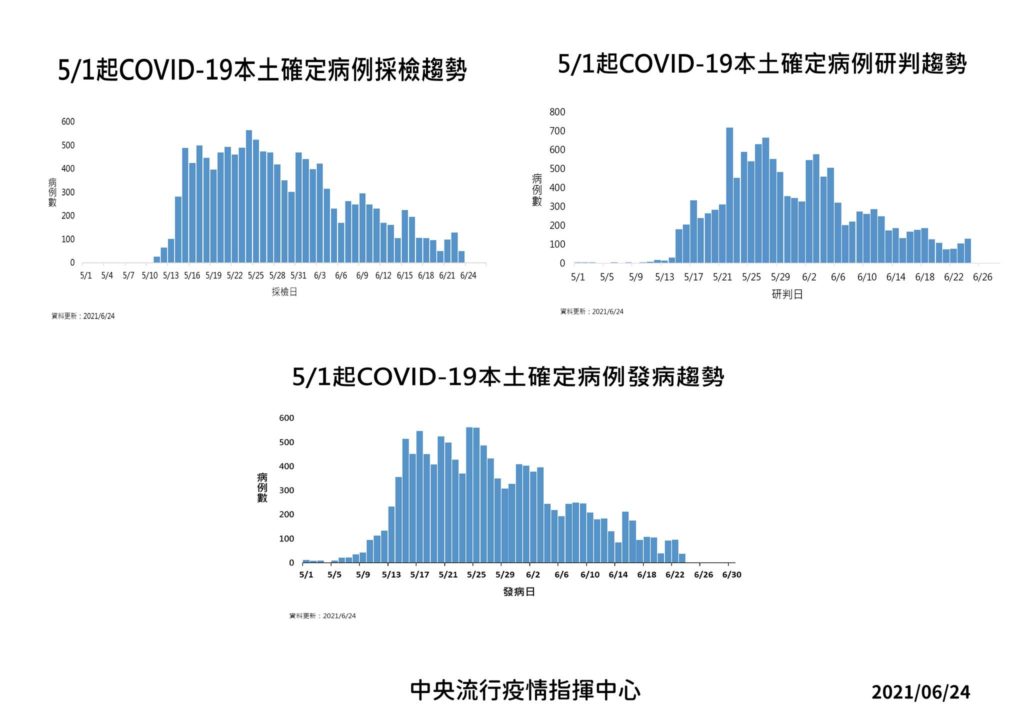 Information on the new deaths announced today (left) and further data released by the CECC. Photo credit: Ministry of Health and Welfare/Facebook

Miaoli city councilor Tseng Wen-hsueh posted pictures on Facebook today showing piles of garbage outside of King Yuan facilities, consisting of the belongings of migrant workers. Namely, some workers returning to their dorms after quarantine have found that the company had thrown out their belongings. This occurs despite workers having to pay 3,500 NT per month for their dormitories.

As Kaohsiung saw an uptick of nine cases yesterday, Kaohsiung mayor Chen Chi-mai has criticized the En Chu Kong Hospital in New Taipei because of its failure to quarantine a COVID-19 case who then traveled to Kaohsiung, infecting two families. The hospital staff reportedly suspected that the man had COVID-19, but he refused to be hospitalized.

The CECC went over the process for home testing today, with home test kits having gone on sale in convenience stores and supermarkets yesterday

Vaccinations in Taipei have now been opened up to new categories including foreigners above 75, as well as linzhang, also known as neighborhood chiefs. According to Ko Wen-je, foreigners will now be included in the same age categories as Taiwanese for vaccinations, a website will be set up for their use, and they will use their ARCs as identification documents to be vaccinated.

The CECC is discussing the possibility of vaccinating family members of medical workers, but it is hard to prove this. The CECC still takes the view that there is insufficient medical proof to allow for the mixing of vaccines, while it is also examining consensus among other countries regarding the possibility of vaccine passports, and will consider using a third dosage of vaccines. In expanding vaccine eligibility categories, it is considering at-risk groups, as well as individuals necessary for maintaining the stable operation of the nation.

When questioned about the possibility of local governments aligning to try and seek vaccine purchases, with Kinmen in particular pursuing this idea, the CECC stressed shortages in global supply. Former vice president Annette Lu claims that two international organizations are seeking to purchase 30 to 50 million vaccines for Taiwan, a rather unusual claim seeing as TSMC and Hon Hai are only seeking to purchase five million vaccines each. Chen Shih-chung stated that the CECC had not received any documentation about this idea.

The CECC denied that members of the oversight committee for domestically-manufactured vaccines have been switched out, asserting that the committee maintains its independence and that personnel changes are normal.

Information on the process for home testing. Photo credit: Ministry of Health and Welfare/Facebook

As much of the fears regarding vaccines stem from reporting by the Taiwanese media, it is to be seen whether the media next moves to attacking vaccines as a whole, as though all vaccines cause deaths. Notably, several questions today focused on deaths after vaccination from the Moderna vaccine, suggesting that the Taiwanese media may move toward reporting as though it were not only AstraZeneca, but Moderna, that are linked to deaths.