28 DOMESTIC CASES, three imported cases were announced by the Central Epidemic Command Center (CECC) at its daily press conference today. Ten of the new cases today were already in quarantine. 4 deaths were announced. There were twelve cases in New Taipei, eleven cases in Taipei, two cases in Taoyuan, and one case each in Hsinchu County, Changhua, and Taichung. 84.4% of cases to date have been released from quarantine.

According to Minister of Health and Welfare Chen Shih-chung, cases are still declining. The number of cases that need to be investigated today is higher, while there were more cases in quarantine yesterday.

Digital Minister Audrey Tang was present at the CECC press conference today to explain details of the vaccine registration system that she helped design. Vaccine registration for individuals above 50 is allowed, as well as categories nine and ten. With a wave of AstraZeneca vaccines set to be distributed, vaccine distribution will take place from July 13th to July 15th, with vaccination set to start on July 16th. Before July 16th, vaccination will be carried out using the existing system. 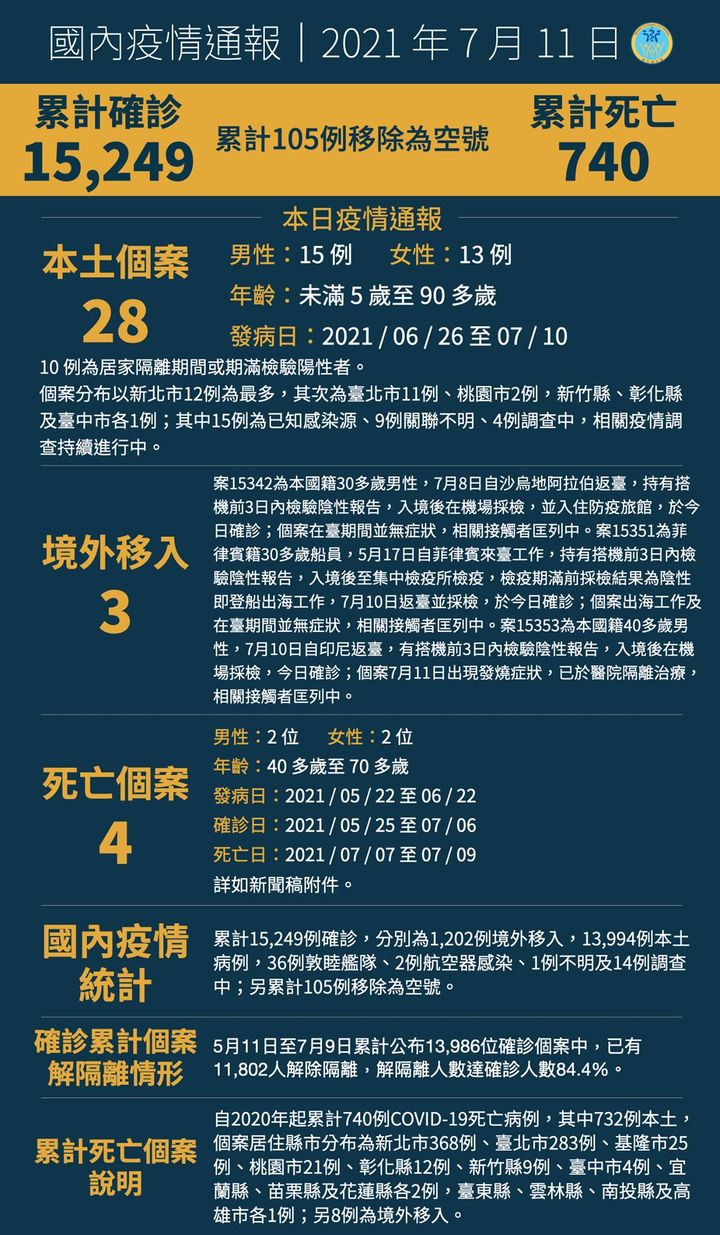 The first three registration periods are expected to be AstraZeneca. Registering for other vaccines may result in delays being vaccinated. There is still time to change which vaccine one is registered for, however. Vaccination for category nine, which is individuals between 18 and 64 years old with underlying conditions that put them at risk, is based on medical information from July 1st last year to May 31st. The CECC is aiming to have as widespread first dose vaccination as possible.

TSMC and FoxConn have signed a sales agreement with Shanghai Fosun for BioNTech vaccine purchases, with 1.5 vaccines to arrive by September and 7.5 million vaccines to arrive between October and December according to UDN. The German government reportedly assisted with the vaccine purchase, likely hoping to avoid the accusation of not selling to Taiwan because of Chinese pressure.

The CECC confirmed that there was “good news” about the vaccine purchase today, but declined to release further details. When asked about the possibility of vaccinating children using the BioNTech vaccine, the CECC stated that it will consider this based on further information about vaccinating children, but that there is still some time until vaccines arrive. Tzu Chi has signed an agreement with the government to purchase BioNTech vaccines as well.

Two employees of SET TV have been found to have been confirmed with COVID-19, with fifteen contacts divided between Taipei and New Taipei listed. The SET TV building has been disinfected, although the worker in question has been working from home since July 2nd.

550 high flow nasal cannula machines have been purchased by the Ministry of Health and Welfare to be used in hospitals. 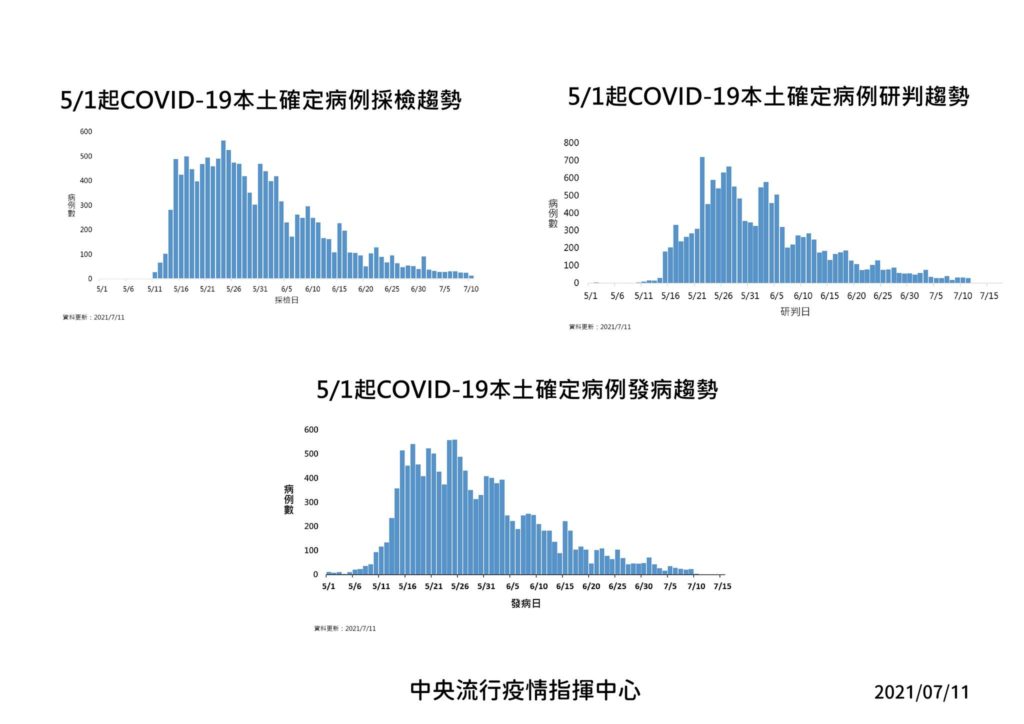 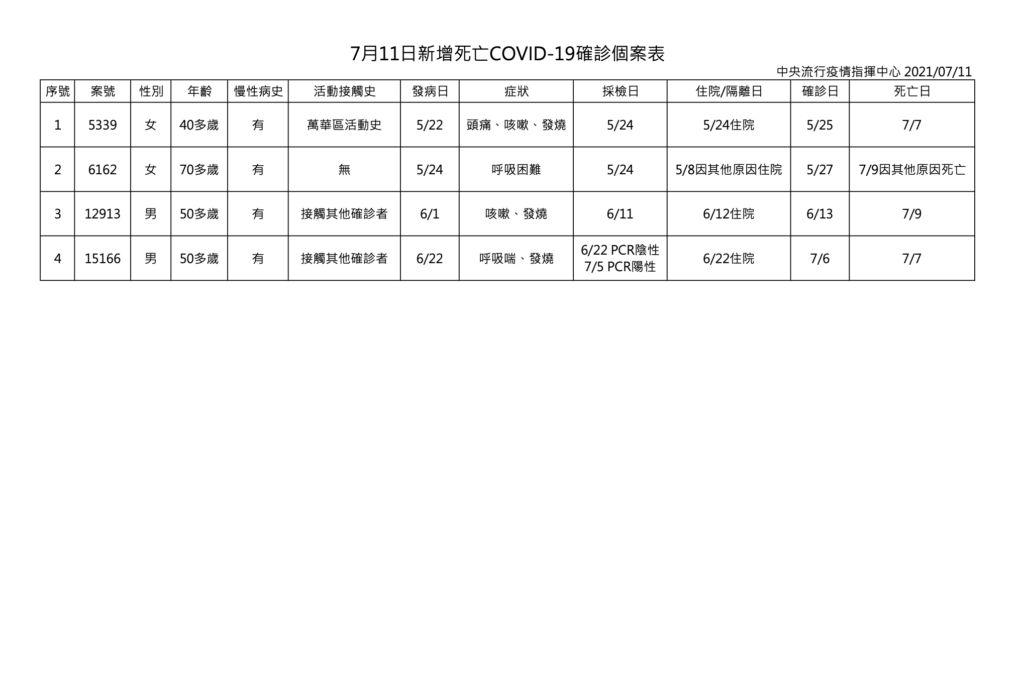 Information on the new deaths today (left), and further data released by the CECC (right). Photo credit: Ministry of Health and Welfare/Facebook

Six individuals are being investigated by police for selling fake oximeters.

Almost all cities and counties in Taiwan have declined to allow indoor dining, despite the relaxation of level three measures by the CECC. Hualien was the last local government on the Taiwanese mainland to announce that it would also ban indoor dining. Kinmen has also announced that it will not ban indoor dining, meaning that only Penghu has not declared a ban on indoor dining. This decision by mayors notably cuts across party lines.

The CECC stated at the press conference today that it hoped to set up a framework that local governments could decide how to carry out, but that it would respect the decision of local governments not to open indoor dining. Otherwise, relaxation of some level three measures is set to begin after July 12th.

According to New Taipei mayor Hou You-yi, between 4,000 and 5,000 tests are being carried out every day in New Taipei. The rate of infection at testing sites is 0.7%, with a focus still on finding asymptomatic cases. New Taipei is cautious about reopening kindergartens due to some relaxation of measures on kindergartens even if they cannot fully reopen, citing 175 cases of children between 0 and 6, and called on the central government to have integrated policy regarding lifting alert levels.

Although group tours of less than nine people can be carried out, the travel industry companies report that it remains difficult to organize tour groups, whether in terms of carrying them out or finding customers.

Kinmen will open up vaccinations for students over 18 studying on the Taiwanese mainland, given that the COVID-19 situation is relatively stable in Kinmen but more dangerous elsewhere. These vaccinations are taking place through Audrey Tang’s vaccine registration system

When asked whether there are arrangements for a charter flight for Taiwanese in Indonesia to return to Taiwan, the CECC stated that this will be considered if there is a need, but currently they can return through other flights. 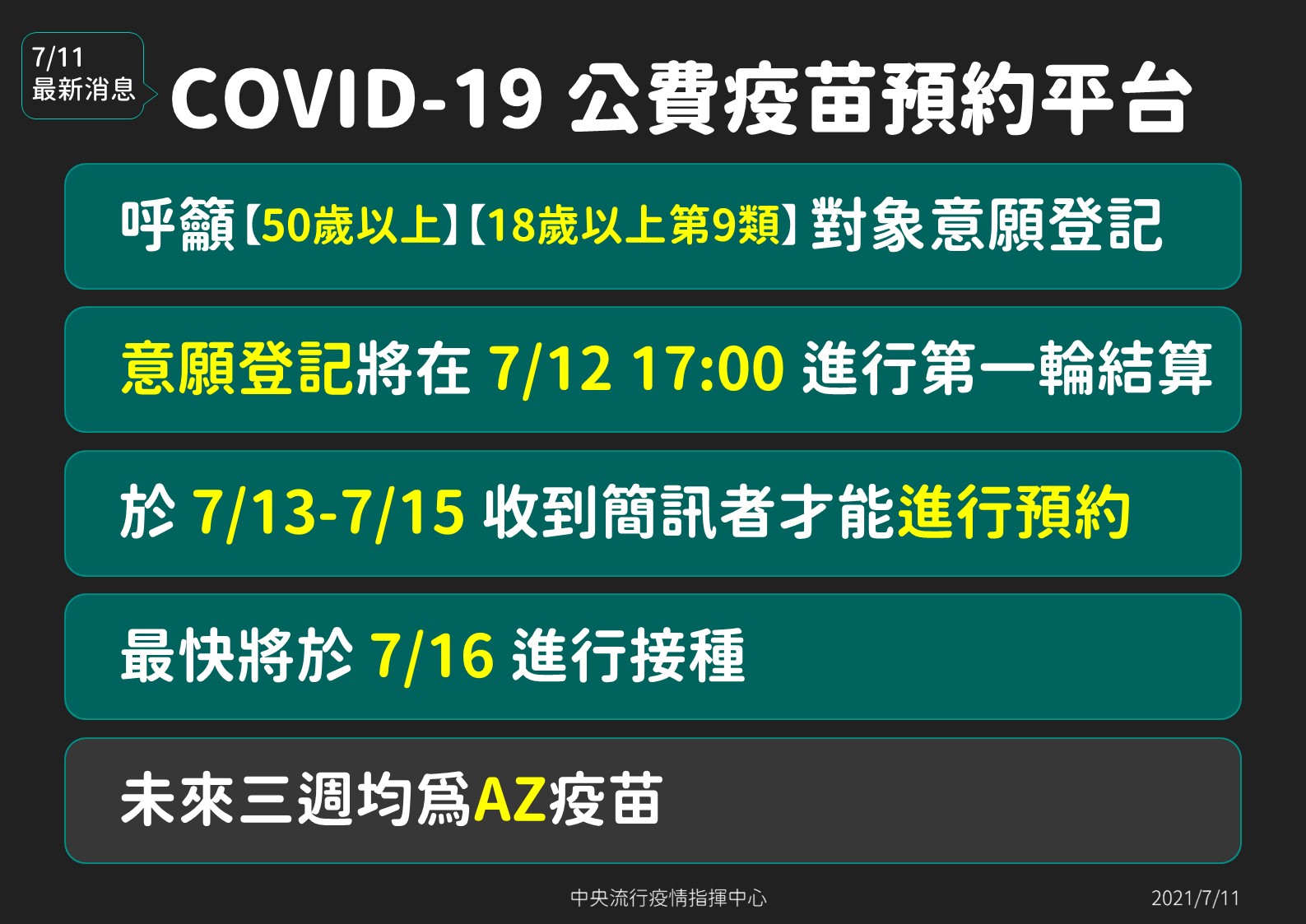 Information about the vaccine registration system to be rolled out in coming days. Photo credit: Ministry of Health and Welfare/Facebook

PCR screening of 1.065 individuals in Taipei has led to one confirmed case. 2,614 will need to be tested in connection to a COVID-19 case who is a China Airlines transportation worker. 2607 have been tested already, finding one positive case.

The CECC was asked about the possibility of individuals becoming magnetic after being vaccinated by the media today, which claimed that there had been similar reports. CECC officials, who seemed amused by the question, commented that such individuals may have been magnetic before being vaccinated.