THE KMT CHAIR election debates, which took place on Wednesday, prove illustrative of the party’s general lack of solutions to address the party’s crisis. The chair election will take place on March 7th, 2020.

The debate took place between the two candidates, legislator Johnny Chiang—not to be confused with fellow KMT legislator John Chiang, Chiang Kai-shek’s grandson—and former Taipei mayor and current KMT vice-chairperson Hau Lung-bin. Notably, Kaohsiung mayor Han Kuo-yu did not pursue a run for chair, despite speculation as to whether he would and calls for from supporters that he run. Han, who has run for KMT chair in the past, was likely aiming to have the party leadership come to him with a consensus that he become the party’s next chair, but he may be more focused on fending off an ongoing recall campaign at present. 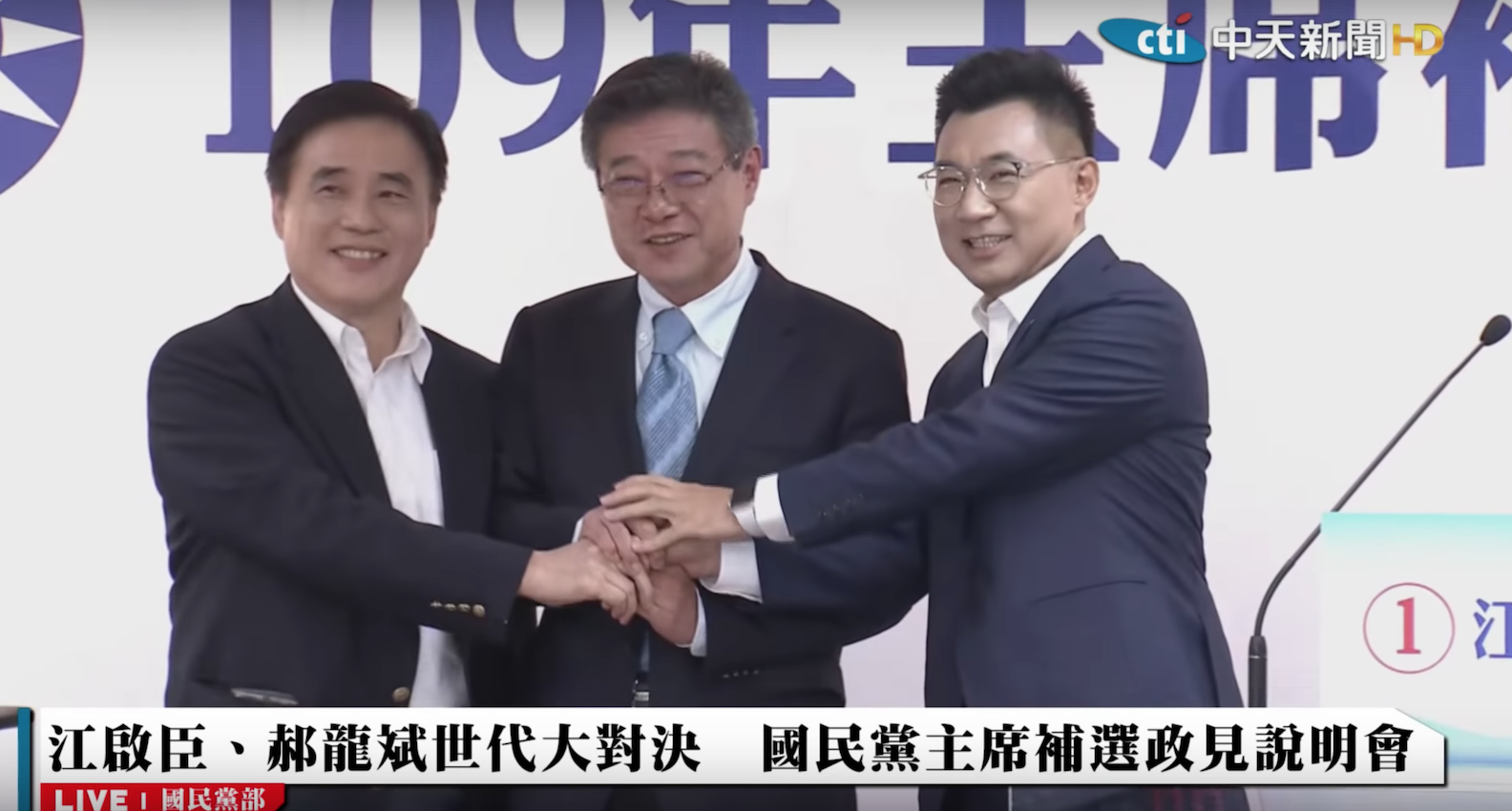 It appears as though the chair election will take place as scheduled despite calls from younger members of the KMT that the election be postponed because of the current COVID-19 outbreak, likely with the hope that there be further discussion within the party about how to reform if the chair election were postponed. The KMT is in the midst of another crisis of leadership following its defeats in the 2020 election, with splits between older and younger members of the party, and calls for the party to rethink its identity.

The debate took the form of opening statements, a round of questions from representatives of Taiwan’s four major newspapers, and closing statements.

In his opening statement, Chiang stated that as party chair, he would focus on promoting new talent, giving them necessary resources, and reorganizing the structure of the party to allow for direct communication between young people and the party chair. Chiang stated that the party would use new Internet-based technologies in order to reform and touted the revolutionary history of the party, stating that the KMT was originally a revolutionary party of young people.

On cross-straits policy, Chiang stated that Taiwan required maintaining connections with all major powers in the region, including the US, China, and Japan, while also preserving human rights. Chiang stated that he hoped to push for membership in international organizations for Taiwan, but also emphasized that the KMT would adhere to the 1992 Consensus. According to Chiang, the DPP has misled the public regarding the meaning of the 1992 Consensus.

Hau Lung-bin took a different tack in his opening comments, spending the first half of his comments touting his experience and past accomplishments. Hau stated that if Sun Yat-sen had been quick to give up, there would be no KMT today, while also quoting Kobe Bryant about the importance of hard work. Hau cited that he had served in roles such as a legislator, mayor, and professor in the past. 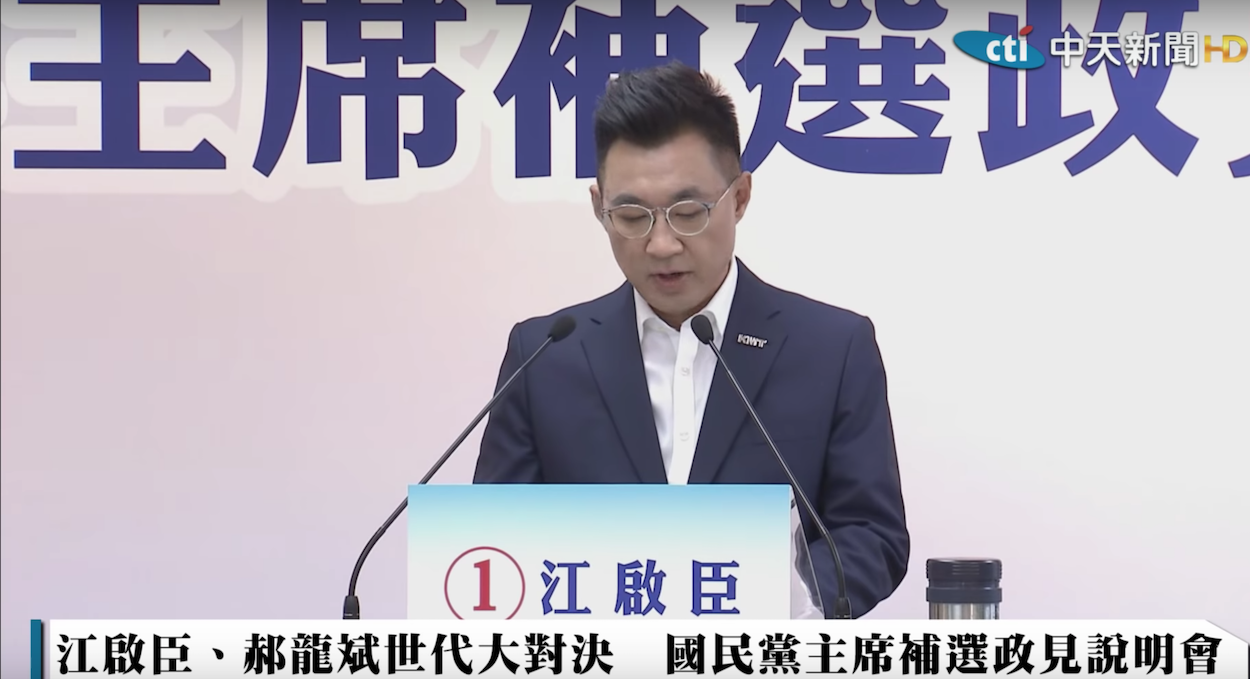 Hau stated that the KMT’s problems returned to the KMT’s internal party culture, stating that there was a need to revitalize the party’s core values, which were preserving the ROC and combating Taiwanese independence. According to Hau, without the ROC, there would be no Taiwan today and with no Taiwan, there would be the ROC. Hau stated that the party culture was too old, which was why the party needed to promote young people and give them opportunities for political office, also bringing up that the KMT was formerly a revolutionary party. However, Hau also emphasized that there was a need to defend the traditional demographics which have supported the party, such as members of the Huang Fu-hsing, public servants, teachers, police, and members of the military, in line with preserving the core values of the party. As the son of retired general Hau Pei-tsun, Hau enjoys the support of the Huang Fu-hsing, a branch of the KMT whose members consist of military veterans.

During the round of questions from representatives of the media, questions generally aligned around four topics: Cross-strait relations, the internal reform of the party, attempts by the KMT to outreach to young people, and what either candidate intended to pursue in terms of their political future after the chair election, whether victorious or not.

In his responses, Hau stated that he hoped for positive exchanges between Taiwan and China. While emphasizing the need to preserve the ROC, he stressed that China would always be larger than Taiwan and that he saw positive exchanges between Taiwan and China as the way to secure admittance by Taiwan to international organizations such as the World Health Organization (WHO) and International Civil Aviation Organization (ICAO), as well as to stop military threats from China. Like Chiang in his opening comments, Hau stated that the DPP was misleading Taiwanese, by depicting the 1992 Consensus as equivalent to “One Country, Two Systems” in Hong Kong. Attempts to split the 1992 Consensus from the notion of “One Country, Two Systems” in Hong Kong has been a common refrain from the KMT during the last election season.

In efforts to win over young people, Hau stated that there was a need to change the pro-China image of the party, to allow young people to have pride in the party, and that securing consensus was the way to change the party. Hau expressed the view that the way to do so was to use apps and modern digital technology to communicate with young people. As for his own political future, Hau stated that he was focused on resolving the party’s current crisis and had not yet considered what else he would do beyond the party chair.

Regarding cross-strait policy, Chiang also took the view that the 1992 Consensus or some consensus view was the way to conduct exchanges with China, but that this needed to take into account the views of other major powers, such as America, and this needed to assert Taiwan’s interests. Chiang stated that there was the need to conduct exchanges and to better package the KMT’s cross-strait policy, as well as reiterated the baseline of opposing Taiwanese independence. 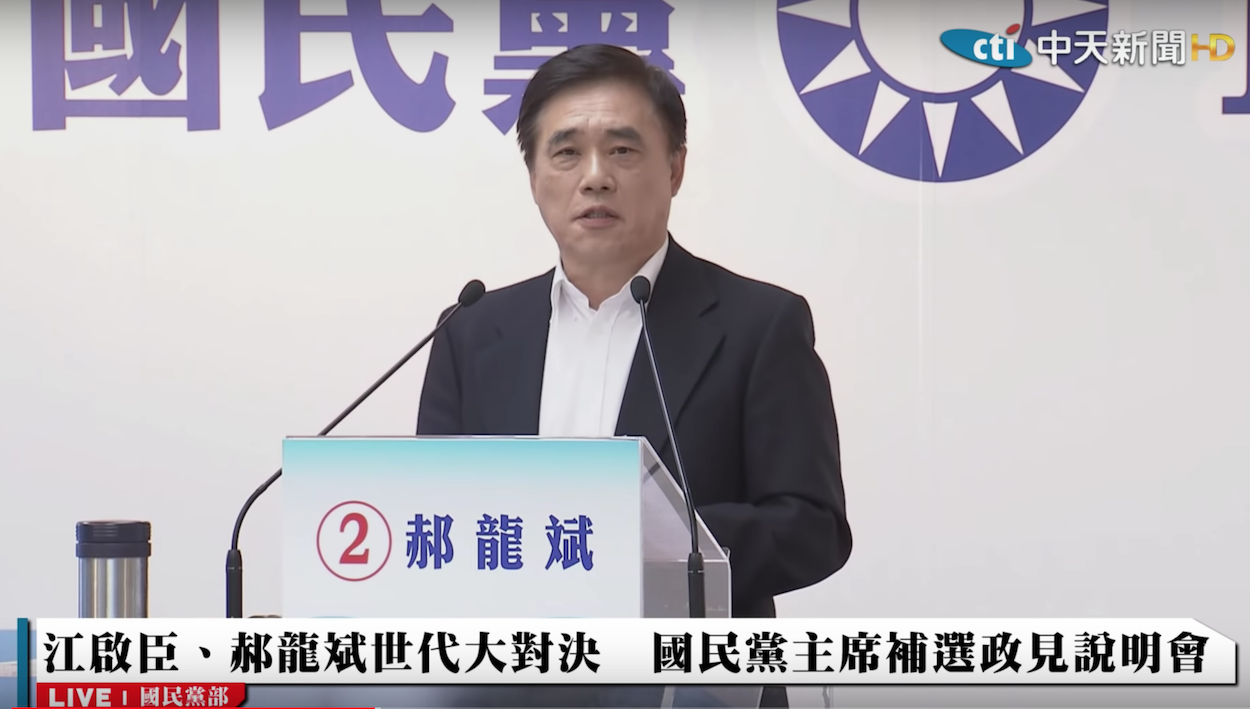 Interestingly, Chiang stated that this would be to oppose legal, or de jure, Taiwanese independence, commenting somewhat positively on that President Tsai Ing-wen of the DPP had emphasized that she was the president of the ROC. Despite Tsai stating this, members of the KMT had lashed out at Tsai during 2020 election season, with the view that the “ROC Taiwan” (中華民國台灣) that Tsai emphasized she was the president of was still different than the ROC (中華民國) that they were loyal to.

In order to reform the party and win over young people, Chiang, too, stated the need to restructure the party, saying that it was a shortcoming of the party that young people lacked party consciousness. Chiang stated that the way to change the party was by using science and technology to modernize, likely also gesturing toward the importance of the Internet for the party going forward. Chiang stated that the KMT needed to connect with civil society groups capable of organizing protests and social movements, and like Hau, stated that his priorities were on the chair election and that he had not yet thought about what he would do afterward.

In closing comments, Hau stated that the KMT would not be a one-person party if he were chair, stating that he would change the party through debate and discussion. Hau thanked the media for its questions and stated that the fundamental values of the party were maintaining the ROC and its constitution and that though change would take place, the fundamental spirit of the party would not change. Hau again stated that he hoped that positive exchanges with China would allow for Taiwan’s participation in international organizations such as the WHO.

Chiang focused more on the need of the party to change in his closing comments, as well, stating that he would focus on using technology to promote change. Chiang stated that he would push for a “KMT redesign” to change the pro-China image of the party and that this would involve localization, internationalization, and digitalization.

Though both Hau and Chiang had slightly differing points of emphasis, one notes that overall, neither candidate offered a substantively different political program than the other. As such, the KMT chair election will likely come down to a contest of personality between the two candidates.

Between the two candidates, Johnny Chiang is the younger politician, with 47 years to Hau Lung-bin’s 67 years. Hau is the candidate with more political experience and Hau clearly tried to bank on that in the election debate. Hau also benefits from the support  of the Huang Fu-hsing and military-aligned factions in the KMT, given his military family background as the son of Hau Pei-tsun. But despite that Chiang could have leveraged on his age to push for a more drastic program of change, one notes that his program was not substantively different from Hau’s. 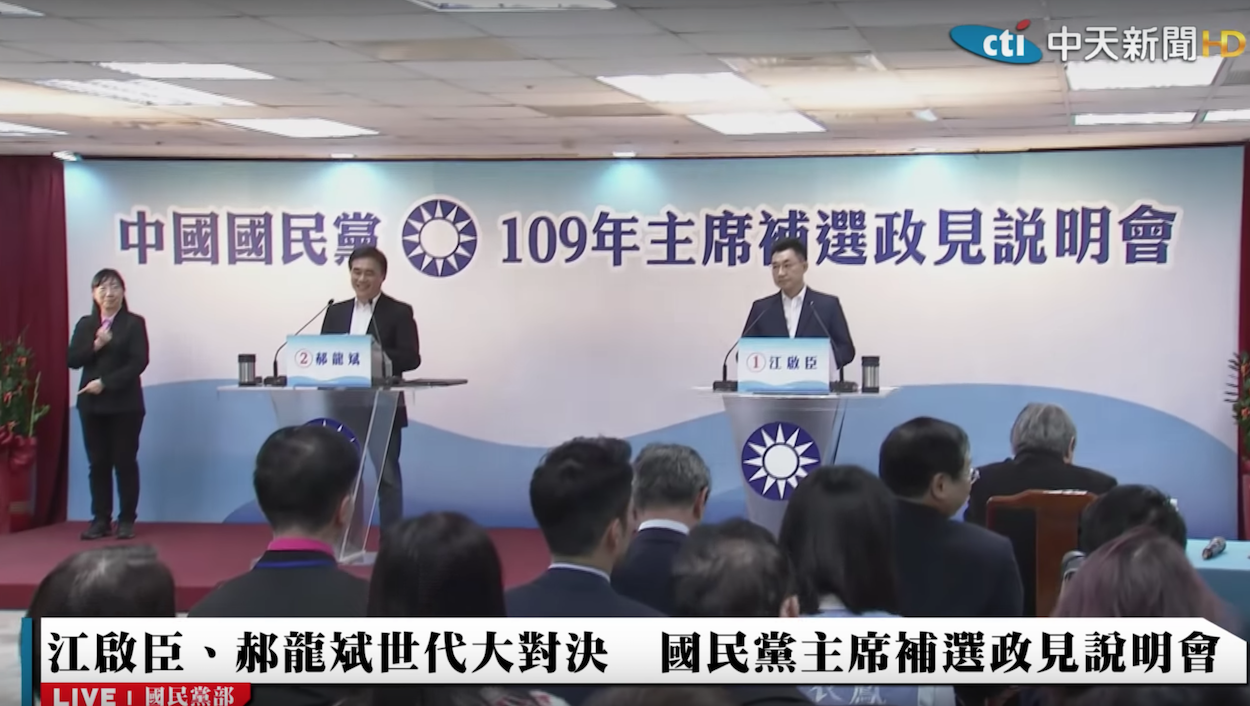 That is, the pressing need of the KMT to change its pro-China public image, win over young people, and modernize the party’s means of public outreach to the age of social media are likely self-apparent to both candidates. However, while Hau and Chiang both sought to strike a moderate tone in calling for reform, one notes that both would likely face heavy resistance from more traditional elements of the party if they ever did actually try and put into motion a program of party reform.

The challenge facing the KMT, then, remains as to whether the party will be able to localize in some way to win over a new generation of party members and allay the party’s pro-China image. This has largely been the challenge that the KMT has struggled to overcome since the Ma administration’s second term, with successive political crises breaking out in the party after the 2014 Sunflower Movement. While some took the view that the KMT’s 2018 electoral victories marked a return to form for the party, one can observe after 2020 elections that the KMT’s long-term contradictions have not yet been resolved and that the long-term political crisis of the party continues.

The KMT did actually make significant strides in the 2020 elections, but these were masked by the public perception that the party had been overwhelmingly defeated, which set into notion another crisis of leadership within the party. As such, the KMT is undercut by its internal contradictions in such a manner that the party will likely fail to take advantage of its gains in the 2020 elections, and the KMT continues to be a party without any long-term viability.