PROTESTS HAVE broken out in Hong Kong over a new law that which would mandate the singing of the Chinese national anthem at official events, such as before sporting events or for the swearing-in ceremonies for lawmakers. The law would also criminalize disrespect to the Chinese national anthem, stipulating maximum penalties of 50,000 HKD, up to three years in prison, and with a three year limit for penalization rather than the usual six months for similar crimes. The National Anthem Bill is currently set to head to Hong Kong’s Legislative Council for its first and second reading, after which the bill will pass into law.

This was anticipated ahead of time. It was stated last month by pan-democratic lawmaker Claudia Mo that pan-Democrats expected pro-Beijing lawmakers to attempt to pass legislation regarding the Chinese national anthem in January. This prediction has evidently come to pass. Pan-democratic lawmakers have primarily criticized the bill on the grounds that it is vague about what would constitute “disrespect” to the Chinese national anthem. 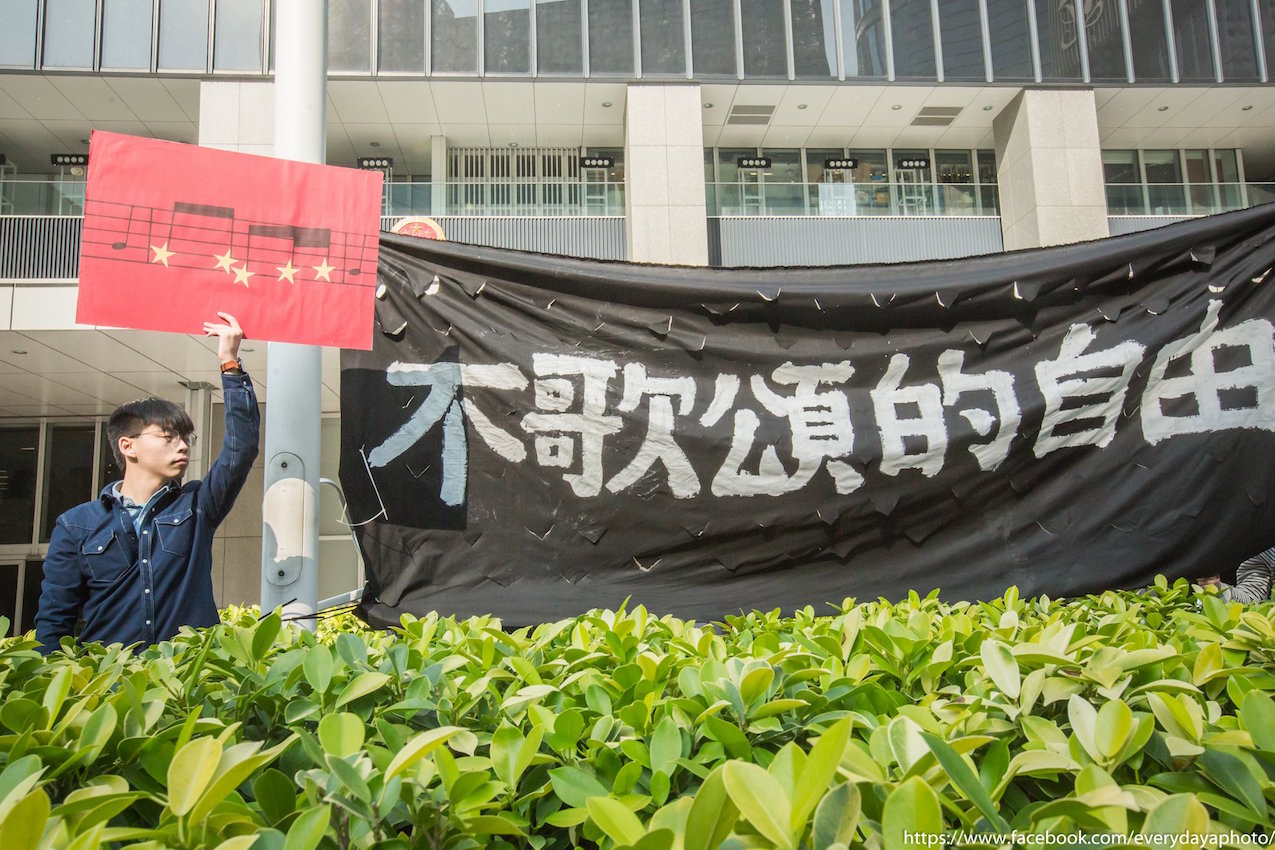 Banner drop by Demosisto against the National Anthem Bill. Joshua Wong can be seen holding up a sign on the left. Photo credit: Everydayaphoto/Demosisto/Facebook

Hong Kong Chief Executive Carrie Lam, Beijing’s lead representative in Hong Kong as the head of the Hong Kong government, has responded to such criticisms by admitting that it is “very difficult to state clearly what an insult is.” However, Lam has also attempted to dismiss such criticisms, by claiming that it is self-evident as to what disrespecting the national anthem means. Hong Kong government officials including Secretary for Constitutional and Mainland Affairs Patrick Nip Tak-kuen and Secretary for Education Kevin Yeung have also claimed that passage of the law was not directly ordered by Beijing.

It may be that the Hong Kong government, acting on behalf of Beijing, wishes to prevent such spectacles from occurring again in the future. Nevertheless, mandating the singing of the Chinese national anthem and instating penalties for disrespect is broadly in line with the deterioration of freedoms of speech, assembly, and political expression that have taken place in Hong Kong since 2014—all too ironic, considering that one of the lines of China’s national anthem, the March of the Volunteers, is “Arise, ye who refuse to be slaves.”

Post-Umbrella movement activist groups, such as Joshua Wong’s Demosisto, have been among those who have protested the new law. This has taken place in the form of several direct actions. The most widely reported protest was a banner raising outside Civic Square. This called for the freedom to not sing the Chinese national anthem to be maintained, phrased as “the right not to express respect to the national anthem, […] the fundamental freedom of every Hongkonger.” The banner was later forcibly removed and Wong and other Demosisto members were dragged away. However, protests have also included other actions, such as a creative action in which Demosisto members dressed as Godzilla and walked around Hong Kong MRT stations mockingly singing the Chinese national anthem. This was later followed up with a Godzilla-themed campaign about the National Anthem Bill.

In the meantime, one expects the Hong Kong government to continue its hardline stance against political dissent in Hong Kong. Apart from that one expects further attempts to force residents of Hong Kong to respect Chinese national symbols, one broadly experts further deterioration in terms of freedoms of expression of Hong Kong, so long as popular resistance from the Hong Kong public does not take place.