THE TAICHUNG MAYORAL debate, which took place on Tuesday evening, revolved around familiar themes. Incumbent mayor Lin Chia-lung of the DPP was debating Lu Shiow-yen of the KMT, joined by fringe independent candidate Sung Yuan-tung. Lin primarily focused on touting his achievements as mayor while Lu focused on attacking his record and appealing to nostalgia for past KMT administrations. 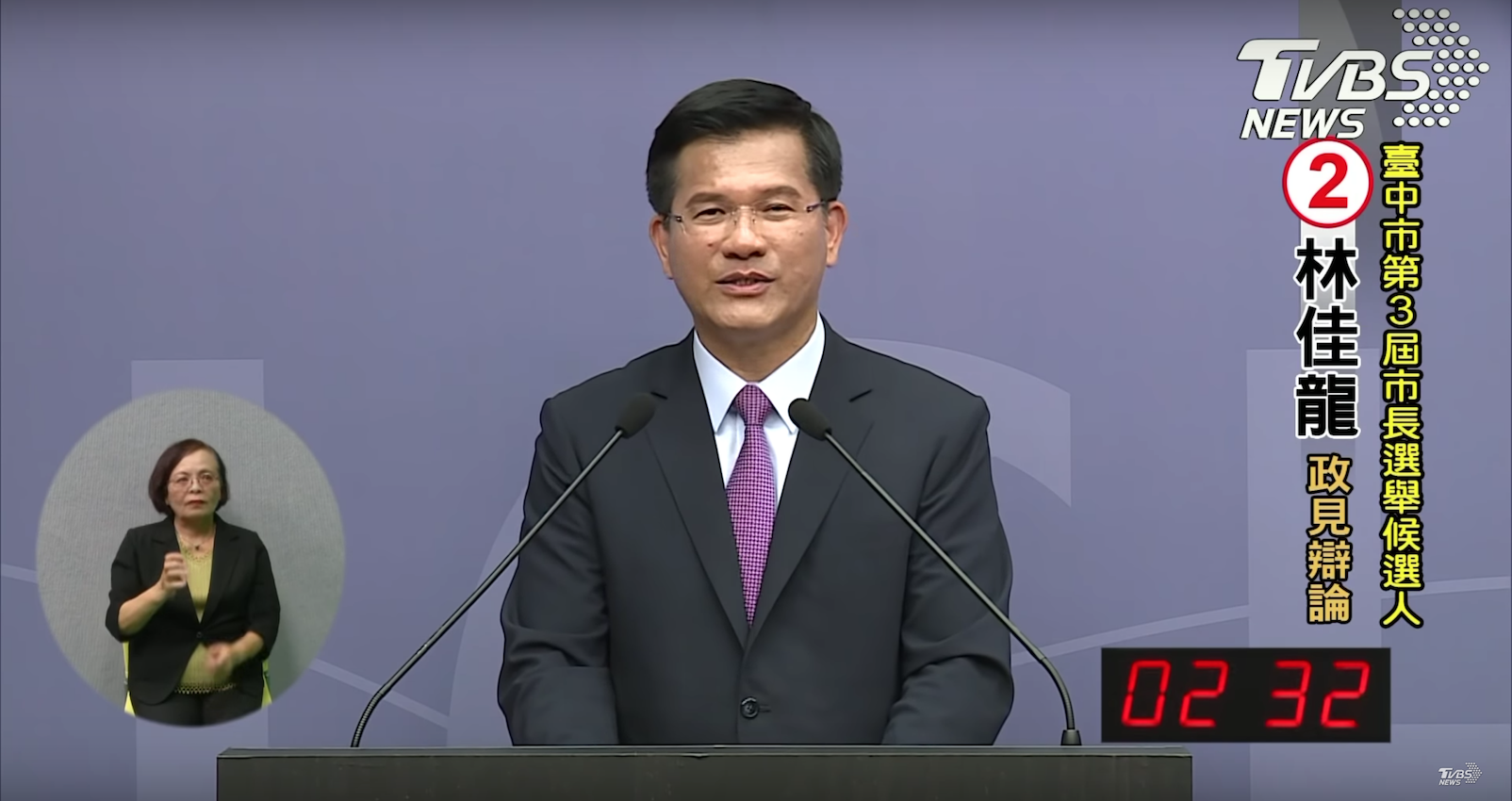 In his comments, Lin began by emphasizing that Taichung was now Taiwan’s second-largest city and touting the events which have taken place under his tenure as mayor such as the Taichung World Flora Exposition, an event which has an expected 8 million visitors in the coming months, as having put Taichung on the international stage. Lin also emphasized increased investment in Taichung, decreased unemployment, improvements in Taichung’s transportation system, and development of underdeveloped urban areas. Lin also claimed an improvement in air quality, emphasizing that according to measurements, air quality was worse under his predecessor Jason Hu, even if there is room for improvement and even if this did not always seem the case.

Lu, on the other hand, who switched between Taiwanese and Mandarin throughout the debate, painted a decidedly different picture of Taichung, claiming that Taichung had seen a decline in tourism with the lack of Chinese tourists, particularly with regards to Fengjia Night Market, and an overall decline in international tourism. Lin cited an aging and increasingly poor population in Taichung, referencing statistics that Taichung had the lowest average salary in all six of Taiwan’s special municipalities and worsening conditions for farmers. Disputing Lin’s claims, Lu stated that Taichung’s worsening problems of air pollution had been aggravated by the DPP’s rejection of nuclear energy and this would affect Taichung’s children. Lu emphasized that she would work to improve Taichung’s economy to turn things around, using a slogan popularized by KMT Kaohsiung mayoral candidate Han Kuo-yu, “Send the goods out, send the money in” (貨出去， 錢進來).

Sung Yuan-tung, the outlier, made a number of highly dubious statements, claiming that he was single-handedly responsible for Donald Trump’s election victory over Hillary Clinton, that he had a significant hand in the killing of Osama bin Laden in 2011, and that he was responsible for the 2015 Ma-Xi meeting taking place in Singapore. Citing such achievements, Sung claimed that resolving Taichung’s problems of air pollution would be easy and also called for the construction of an underwater tunnel from China to Taichung.

When the three candidates were asked about what they would do to improve Taichung’s international standing and quality of education. Lin said that the two issues were linked, in that Taichung must improve its education in order to improve its international competitiveness, and that people would come to Taichung if it was both livable and workable in. Improving Taichung’s transportation infrastructure, whether with regards to railroads or its harbor, or holding international forums, or holding international expos such as the Taichung World Flora Exposition, would be one way to improve its international standing. Lin also stated that he regularly met with Taichung university heads every three months in order to discuss salient issues and cited that he had the assistance of the central government in his efforts to develop Taichung. 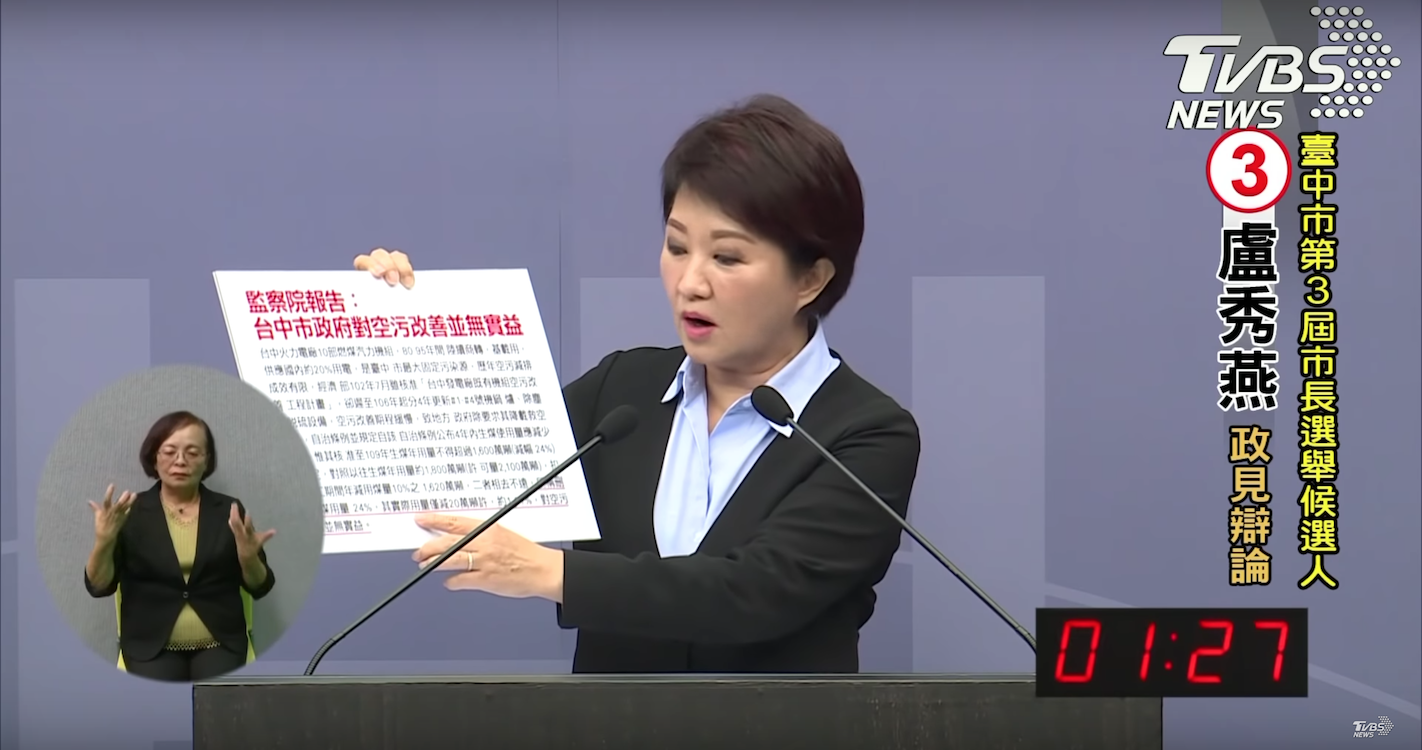 Contrastingly, Lu tried to attack Lin for being a member of the DPP in response to this question, citing Taiwan’s loss of international allies under the Tsai administration as detrimental to both Taiwan and Taichung’s international standing. Taichung losing the rights to host the East Asian Youth Games as a result of Chinese pressure was claimed to be the fault of Lin, Lu claiming that Lin had lost something which Lin’s KMT predecessor, Jason Hu, had fought for. Lu also claimed that given problems regarding air pollution in Taichung, Taichung would not be able to attract international talent, such as foreign scholars. Lu also attacked what she claimed to be Lin’s lack of transparency regarding government reports on air pollution, citing that she would release reports previously not released by the Lin administration in two weeks after taking office.

When asked about urban development, Lin cited the development of the Taichung MRT under his tenure, efforts to help out areas confronting issues of uneven development, and stated that young people were moving into older areas and that the creative industries they developed were incorporated into events which put Taichung on the international map, such as the flower expo. According to Lin, this was a way that Taichung could assist in the development of central Taiwan.

Lu claimed to the contrary that the Taichung MRT had not improved transportation in Taichung while it had wasted much money, whereas if voted in as mayor, she would build an international cultural center, an international expo center, and an agricultural center to help out farmers. Lu further accused Lin of ordering city workers to canvas for him, an illegal use of city government personnel for personal gain.

In closing comments, Lu again raised the issue of the unaffordable real estate for young people in Taichung, combined with low salaries, increasing debt on the part of the city government, and worsening problems of air pollution. Lu asserted that she was the most experienced candidate for mayorship and that because of her long years of political experience, she understood the needs of Taichung resident. 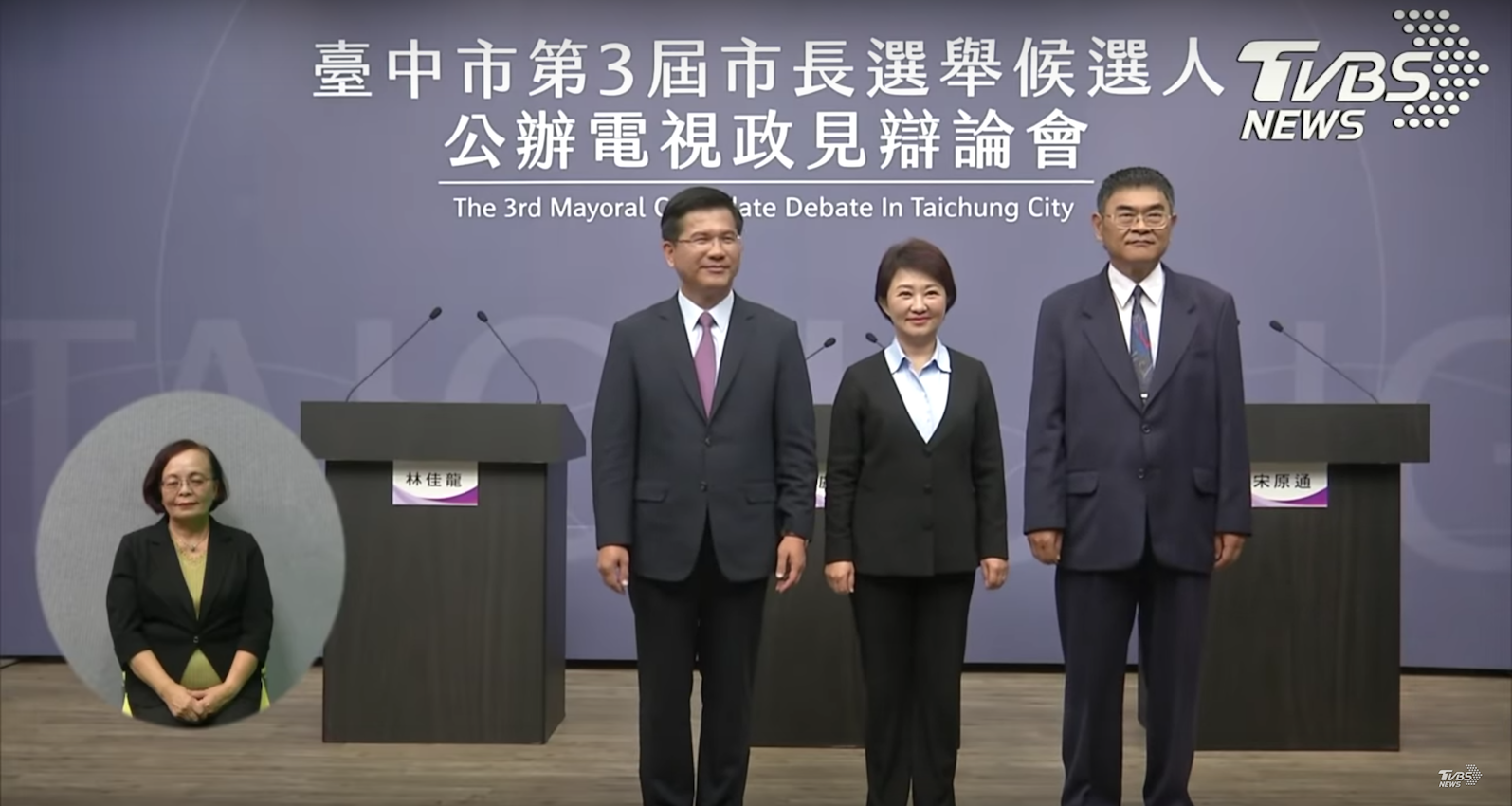 Lin responded in closing comments by emphasizing the need to rely on objective statistics and that, as Taichung had grown to become Taiwan’s second largest city under his tenure, this would have not taken place if Taichung was as bad as Lu claimed. Lin also cited Taichung’s improving birthrate, as aided by what he claimed were his efforts in improving childcare, and said that because Taichung was his home, he had stayed there to try and improve it, asking voters to allow him to continue on the path of social progress.