A RECENT VIDEO released by Chinese state-run media outlet Xinhua News about border conflicts between China and India, titled “The Spark: 7 Sins of India,” has provoked anger with accusations of racism against Indians in the ad. This is telling about how China views tensions with countries with non-Han ethnicities, as well as reflective of discriminatory attitudes within China towards non-Han individuals with darker skin, such as Uighur residents of Xinjiang. This is hardly a good face for China or for Xinhua, which recently branded as “New China” in efforts at distancing Xinhua from its known reputation as an outpost of Chinese state-run media.

Firstly, the video proves a bizarre attempt to mimic popular videos produced by YouTubers and Internet listicles. Consequently, we can see the video as part of the growing trend of Chinese state propaganda efforts aimed at creating an image for contemporary Chinese nationalism as cool, trendy, and up with the times, something which is sometimes successful and other times has had mixed results, as we see with state-produced hip hop videos or nationalist Chinese teenage boy bands. 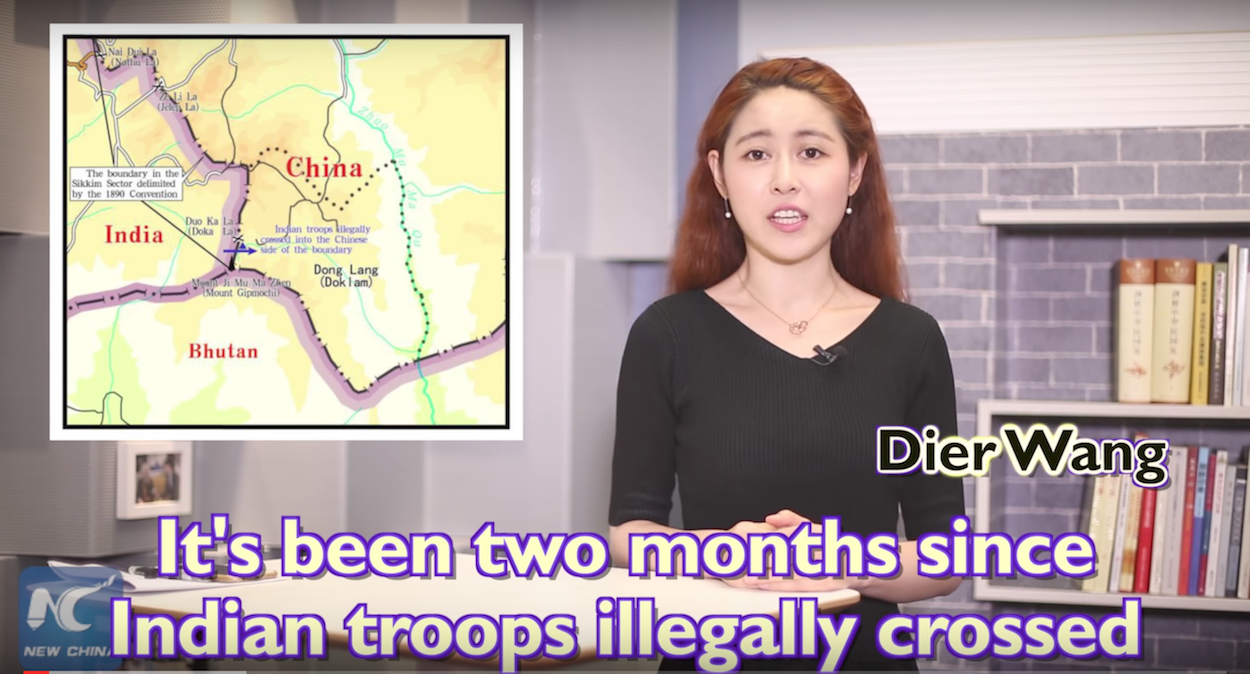 Within the video, China more or less claims that territorial disputes with India over the Doklam Plateau, where India, Bhutan, and China converge, is a sign of India refusing to comply to international law, when, according to the video, the Doklam Plateau is indisputably part of India because of treaties between Great Britain and China dating back to 1890. Apart from a willingness to cite 19th century colonial history, we do well to note that contemporary China, the PRC, was founded in 1949, but the PRC long has the habit of asserting the territorial claims of the Qing empire in order to justify territorial claims, as it does to justify claims over Tibet, Xinjiang, and Taiwan. In such cases, China asserts that these places have always been a part of China, never mind that China’s borders have fluctuated through its history and it is sometimes legally a question as to what territories the PRC and CCP inherits from the Qing empire, which it had a large part in overthrowing.

And the video is indeed racist, featuring a Han Chinese actor dressed in a comically hairy beard, and speaking with a stereotypically Indian accent. Indians are more or less depicted as barbaric, with the claim that Indians are uncivilized barbarians for their ignorance of international law and their actions evidence bad manners, more than anything else. It is, for example, claimed in the video’s narration that India is acting like a bad neighbor driving his bulldozer into his neighbor’s garden, pretends to be asleep when confronted on the issue, as well as compared to burglar who breaks into one’s house. This is accompanied by depictions of the Han Chinese actor which are racist caricature more than anything, in acting as a personification of India. Likewise, in the video, Chinese state-run media further claims that India is making up excuses in claiming to only be acting on behalf of its smaller neighbor Bhutan, and speaking for Bhutan when it cannot, but in featuring a personified depiction of Bhutan in the video that denies India’s claims, in an ironic act of lacking self-consciousness, China also similarly attempts to speak for Bhutan in a manner not too dissimilar to what the video criticizes.

But such racism on the part of China should not really surprise. Playing up its history of leftism, while China has seen fit to claim that it seeks to ally itself with other non-western nations of the Global South in the name of “south-south cooperation”, we can see how this facade falls away in contemporary China when it comes to when non-western nations come into conflict with China, following which China is all too happy to resort to racist stereotypes. In particular, discrimination against darker skinned Asians is prevalent in China itself, given harsh ethnic repression against Uighur residents of Xinjiang and the construction of a police state in Xinjiang justified as fighting Islamic terrorism. One suggests that these attitudes may extend to views of Indians.

One also sees contemporary examples of Chinese racism with the many stories of racist attitudes towards black people in China, that fact that Chinese infrastructure projects in Africa, Latin America, and Central America are accused of being contemporary colonialism within these places, or that many stories circulate in Africa, Latin America, and Central America about the racist attitudes of Chinese workers in these place.

Ironically, while criticizing the western world for its racism and past colonialism, one observes that with its rise to global power, China has absorbed many tropes originally drawn from western racist caricatures of non-western contexts. The caricature of Indians featured in the recent video by Xinhua seem to be drawn from western caricatures of Indians, for example. We see similarly with regard to the recent film, Wolf Warrior 2, China’s highest grossing film ever, in which a Chinese protagonist more or less acts as a white saviour character towards poor black children in Africa might in Hollywood production, likely indicating how Chinese film absorbed these tropes from Hollywood films. 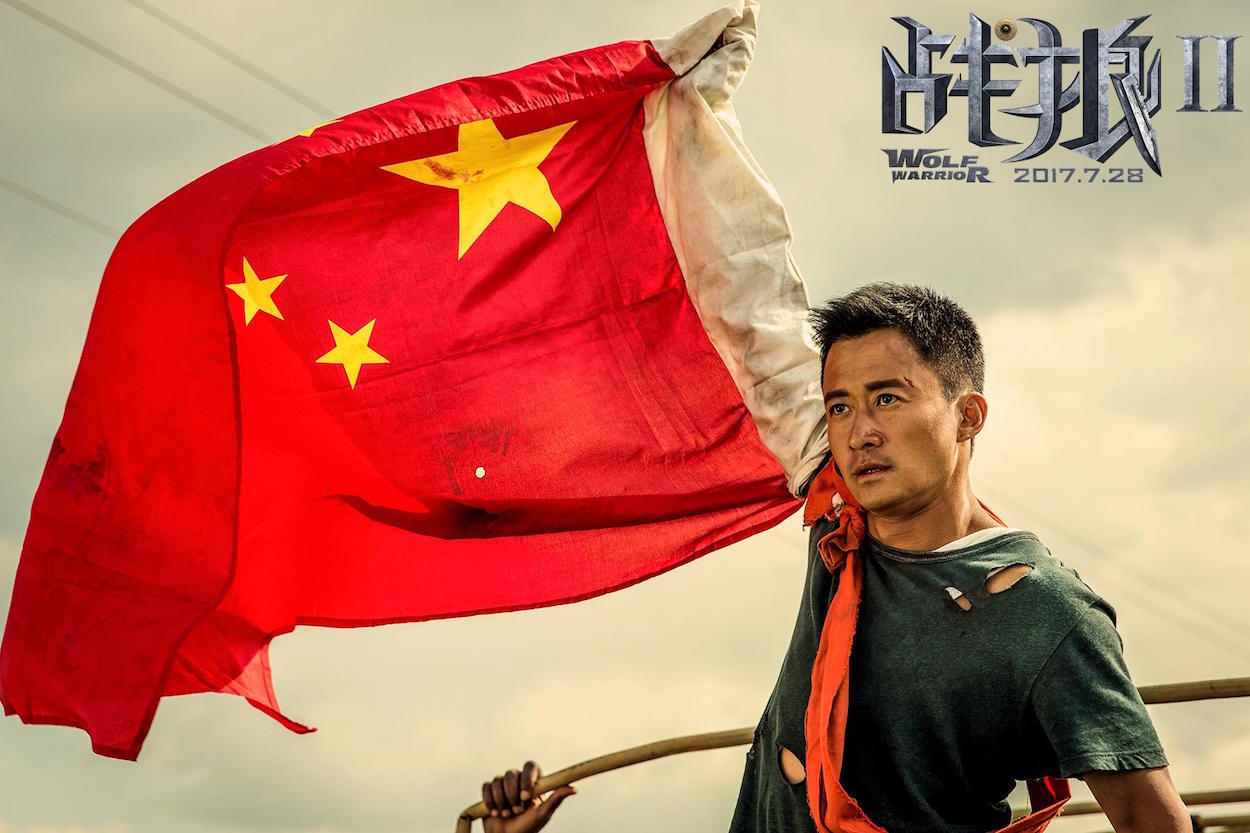 However, that these tropes are originally western does not absolve China either, seeing as at other times, China has strategically chosen to embrace the discourse of ‘south-south cooperation”. China likely now feels confident enough in its global power that in order to assert itself as equal to the West, China attempts to draw on the same racial stereotypes thrown around by the West, or to step into the symbolic role of the western colonizer in cultural production, as seen in China more or less occupying the role that the “white saviour” would play in a Hollywood film similar to Wolf Warrior 2. But just because these tropes and stereotypes may originate from the West does not mean that China has no agency in deliberately choosing to use these tropes either, when it has criticized the West on such matters in the past.

And perhaps what always undergirded the discourse of “south-south cooperation” was that this was always simply pretty words which China drew on to try and compel other non-western countries to ally under its leadership and to claim that this had mutual benefit. One does well to remember that the West always justifies its leadership of global society as beneficial to all nations, including non-western nations, and hardly acknowledges its exploitative role, instead claiming that this is for the sake of “saving’ or ‘civilizing” smaller, weaker non-western nations. But China now wishes to take up this position of global hegemony.