RECENT CRITICISMS of the newly launched pay.taipei initiative by members of Taiwan’s tech community, including g0v’s Billy Lin, are illustrative of disconnects between Taiwan’s tech industry and government officials who may wish to create a tech-friendly image for Taiwan but may not be willing to take the sometimes simple steps to realize that vision, as well as the long path to be walked for Taiwan in terms of catching up to other parts of the world in many aspects of its Internet ecosystem. Namely, pay.taipei has been lambasted for not using HTTPS traffic, using plain text passwords, and using fixed IPs, illustrating a lacking knowledge of even basic web security in its design.

As such, Lin shared a post criticizing the service on Facebook by Thomas Kuiper, the general manager of the Asia section of domain name registrar and cloud hosting provider Gandi.net. Since criticism from Lin and others individuals, the system has been taken down for repairs, though the Android version is already back online. Either way, pay.taipei seems off to a rocky start. 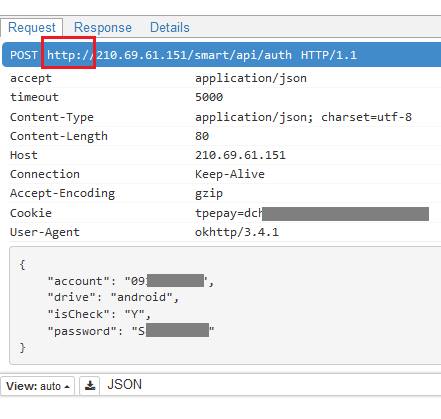 Pay.taipei is a new initiative of the Taipei city government to integrate currently existing systems for paying parking, utility and medical fees. In this way, Taipei residents will be able to centralize how they pay their bills, and freed up from limitations on when and where bills need to be paid. As Taipei mayor Ko wen-Je phrased it, this would allow people to pay their bills at even midnight, right before those bills are due.

In particular, Ko touted this as part of the Taipei city government’s to make the city friendlier for e-commerce, which Ko has stated his faith in as the wave of the future, and Ko intends to show off Taipei’s e-commerce next month in Shanghai as part of a twin-city forums between the government heads of both cities. Yet if the pay.taipei initiative is off to a rocky start with the revelation that it lacks even basic security features commonplace elsewhere in the world, this illustrates that while politicians as Ko may like to show off Taiwan’s technological innovations and the integration of Internet technologies into daily life, sometimes this is simply talk.

In recent years, the youthful members of Taiwan’s tech community have frequently been in the spotlight, especially after the Sunflower Movement caused a large amount of public attention to be focused upon civic initiatives by young people, the participation of young people in politics, and the pioneering use of Internet technologies by young people in both. In the aftermath of the Sunflower Movement, media spotlighted tech activists such as Lin and others, oftentimes with regard to how they used Internet technology to help coordinate Sunflower Movement’s attempts to outreach to domestic and international media and to organize information about ongoing news developments.

And in the years since, politicians as Taipei mayor Ko Wen-Je and Taiwanese president Tsai Ing-Wen have attempted to create a tech-friendly image for themselves and their governments. Ko, for example, drew a number of post-Sunflower youth activists into his campaign and sought to run a “transformative digital campaign” which employed Internet technologies to understand who was his audience and allow him to reach his audience. Following Ko’s unprecedented victory as an independent candidate in the race for Taipei mayorship, then, Tsai Ing-Wen sought to do much the same in her campaign. After winning, Tsai subsequently employed Audrey Tang, like Billy Lin an influential members of Taiwan’s civic-minded g0v tech community, as her “Digital Minister,” seemingly entrusting Tang with the task of of advancing Taiwan’s tech development and ensuring that Taiwan is not left behind by burgeoning technological developments.

Yet very likely, technology professionals frequently in the spotlight such as Lin or other members of g0v tech community were not consulted with regard to pay.taipei, hence why pay.taipei would make such basic Internet security errors. Seeing as, again, Taipei mayor Ko is in particular a politician who has staked a large part of his image on use of Internet technologies, this should raise broader concerns as to whether Taiwanese politicians are genuinely heeding the words of Taiwan’s young and capable tech professionals or whether this is all talk.

Or, perhaps more dangerously, tech professionals as Lin were consulted, but their suggestions were ultimately disregarded or overridden, perhaps with the view that requiring security features as non-plain text passwords, HTTPS, and dynamic IPs would be too troublesome and, consequently, unnecessary. Taiwan may have many young and highly capable tech professionals as Billy Lin and Audrey Tang, and the Taiwanese government may be one of the world leaders in open data. Yet at the same time, many of Taiwan’s Internet infrastructure lags behind the rest of the world, as is readily visible in the outdated web interfaces of government websites, the crucially necessary public infrastructure as the ticketing services for the High Speed Rail, or e-commerce giants such as Ruten or PCHome, which sometimes prove not only insecure, but highly inconvenient.

Perhaps the failures of pay.taipei should widely discussed then, as a lesson for the future of Taiwan’s technology initiatives.