The Knight, the Fairy, and the Cult Leader

Is the KMT Doing Itself Any Favors With Selecting Wang Ju-hsuan?

FOR THOSE USED to election cycles elsewhere, it may be surprising for Taiwan’s political parties to announce their respective vice presidential candidate so late into the 2016 election cycle. Yet, in consideration of that one would have thought the KMT would be more prudent with its choice given that Eric Chu is running at about 19% at the polls compared to Tsai’s 45%, we might cross-examine the vice presidential candidates of the DPP, KMT, and PFP alike—who have been labelled by netizens as the “Knight”, the “Fairy”, and the “Cult Leader” respectively.

THIS IS THE second time Tsai is running as a presidential candidate. Previously in 2012, her running mate was Su Chia-chuan, a DPP politician. In this election, she announced on November 16 that her running mate would be Chen Chien-jen, vice president of Taiwan’s foremost research body Academica Sinica. Figures with no previous political affiliations but some kind of background as an academic, scholar, or professional running for office has become a common phenomenon in Taiwan since last year, when Ko Wen-je rose to prominence for being a political neutral figure who won against Sean Lien in the race for mayorship for the Taipei City. Given how successful Tsai’s campaign has been so far—and that Tsai possibly could have even picked someone controversial as her vice president but still won the election nonetheless—Chen has been a candidate well-received by the public. Chen is an epidemiologist, and served as the Minister of Health from 2003 to 2005 under the Chen Shui-bian administration. Chen rose to fame for leading the campaign against SARS, and led Taiwan to international recognition for the way Taiwan dealt with the epidemic. In addition to being an academic, a great executive, and a national hero, he is a devout Catholic who gained the sobriquet “Knight” because he was awarded the title the Knight of Pontifical Equestrian Order of St. Gregory the Great by the Vatican in 2013.

Given these accomplishments, the KMT had to resort to dirty tactics in raising charges of plagiarism in regards to Chen’s thesis! Unfortunately, once again, this strategy backfired as netizens and academics were quick to criticize the KMT for making blind accusations.

CHU’S SELECTION of Wang Ju-Hsuan as his vice president candidate, is probably the news gem of the week, and is still granted front page news coverage. Day by day there is further commentary about her, generally concerning past controversies. Wang Ju-hsuan is known as an advocate of woman rights, a human rights lawyer, and a labour rights lawyer, before taking up the job of the youngest Minister of Labour under the Ma administration. While active in office, Wang enacted many policies aimed at protecting women in abusive relationships, and strengthening women’s rights and influence. That may be Wang’s few positive contribution, however, as the public attributed more scandals than accomplishments to this well-known figure.

Of the many women candidates to show that the KMT is as concerned about gender equality as Tsai, Chu could have just picked Hung Hsiu-chu. She might have been the perfect candidate to appease the group of loyal KMT members that are unhappy with the decision to remove her as presidential candidate of the KMT. But what is special about Wang that has led her to so much front page controversy about her as vice presidential candidate? While in office as Minister of Labor, Wang proposed raising Taiwan’s minimum wage to 22K, but justified this with the infamous statement: “Do you think 22K isn’t enough? If not for this policy, these people won’t even have a single cent!” In addition, Wang pushed for controversial policies such as non-paid leave and no mandatory leave on typhoon days, making her a rather unforgettable former Minister of Labor.

Wang’s policies and public gaffes were met with backlash, resulting in her resignation in 2012. But that did not keep her out of the political game. During her term, she designated a specific budget of 20 million and hired 80 specialized lawyers to sue the group of 1300 unemployed factor workers, whose average age was sixty, for their pension funds. Indignation filled the public as it seems utterly unreasonable for the government to sue these old unemployed factory workers to desperation. The demonstrations which followed became famously known as the “Hualong Self-Help Association Demonstration Incident” (華隆自救會抗爭事件). Originally, workers protested against the government for them to provide an amount necessary for their pension funds, and would have expected the government to demand payment from the factory owners who owed the workers their remuneration. Instead, the government started pursuing the return of the pension funds from the factory workers rather than the owners. This is the incident which gave Wang the nickname “fairy” because of what she said in an interview concerning factory workers demonstrating in protest of her actions: “Their expectation of me after I take on this case is that everything will be resolved, just like a fairy with magical powers!” From then on, activists such as Chen Wei-ting, who was deeply involved in the protests, scorned her by calling her the “Fairy”.

As reported, Wang is well-known in the real estate industry for her constant purchases of “military houses”, in which she reaped large profits from their purchase and sales. Military houses are part of a urban renewal plan to redevelop military dependent houses (眷村）and make them affordable for low-income earners. There are certain conditions to be met in order to purchase military houses. An individual must have no assets under his/her name, and the reselling of houses cannot be done within a 5 years time frame. Yet all these conditions did not seem to restrict Wang from speculating. Given her vast knowledge in law, she knows the loopholes of such policies, which to began with probably existed for housing speculation. DPP legislator Duan Yih-kang has been hot on her heels, revealing that she has purchased at least 6 military houses, and calling upon Wang to account for her capital assets. In Taiwan, candidates are required to register and reveal their capital assets, and Wang, exasperated, on Wednesday agreed to allow these inquiries.

JAMES SOONG tried to surprise the apathetic Taiwanese electorate—probably as a reminder of his existence—by announcing his vice presidential candidate right after the other two parties did. The actions of the KMT and the PFP probably backfired given how controversial both the KMT and PFP vice presidential candidates were. And Soong and Chu did a great job in giving the DPP an opportunity to burnish themselves with “Knight in Shining Armour” of Chen—who of course compares rather favorably with “Fairy” Wang and “Cult Leader” Hsu Hsin-ying. 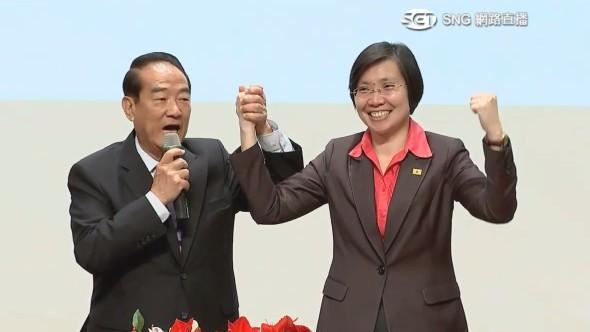 Soong tapped Minkuotang (MKT) chairwoman Hsu Hsin-ying to join his ticket as vice presidential candidate. The Minkuotang is a party formed from far-right wing elements of the KMT dissatisfied with the course of the party, formed earlier this year and lambasted as cult-like in nature. Well-known as a practicing Zen Buddhist, Hsu was elected as a county legislator in 2012 under the KMT, served on the board of the KMT’s standing committee in 2014, then quit the KMT in March this year to found the MKT. Originally meaning to run as a Hsinchu legislator, having ties and affluence there, Hsu decided to drop out of the race to run with Soong for presidential candidacy, leaving the MKT in a rather precarious situation in Hsinchu. Perhaps it is after practicing Zen for so many years, Hsu has cultivated herself to a level of enlightenment where she can resolve her inner conflict of personal interest over the collective good, that is, giving up a race which she would probably win in favor of a race which she will never win.

One would have thought that Soong had a better reason to pick a candidate from a different political party than the one whose ticket he is running under, since it would confuse the PFP electorate on which “party” to vote for with the party vote. Yet Soong could not have made it more entertaining by saying that he chose Hsu so that he could form a coalition government, not for the interest of one party or one people, but to put aside partisan struggles and find common ideals. Soong may have been particularly misinformed, but history informs us that the KMT, PFP, and the newly found MKT, were all from one party, and arguably consist of one group of people.

Conclusion: Is the KMT Desperately Trying to Destroy Itself?

AS OF NOW, stories of Wang’s past controversies have been widely circulated on social media. It is apparent that Chu’s hand-picked running mate is not helping his election, tabloid news coverage still continuing to seize on past incidents regarding Wang. On the other hand, the Tsai-Chen ticket has gained largely positive news coverage, given Chen’s outstanding contribution during the 2003 SARS epidemic, his Catholic background, and his charismatic outlook. The disparity in “performance” and “popularity” between Chen and Wang was further accentuated when KMT announced it’s “legislator-at-large” party list; this drew criticism from both within and outside of the party.

There are certainly other possible candidates the KMT could have picked to fill the role of Chu’s running mate, so why Wang? First, it was clear that Chu would pick a female candidate as part of a gender equality consideration, given that the DPP put forth a Tsai-Chen duo and much news coverage had been devoted to Hung running against Tsai would mean Taiwan would have a female president regardless of which party won. To begin with, it would be preferable to pick a candidate with a clean slate rather than one with a prior history of controversy. But Wang’s past controversies happen to be intricately related to the major problems that culminated in the social uprising which blew up into the Sunflower Movement. If selecting Wang is part of how Chu wishes to garner votes from the 1.3 million new voters electorate that are mostly get their political information from social media, he is committing a large strategic error.

Maybe to avoid looking bad, Chu would pick someone that has a worse image than he does. Thus, if the KMT were to lose the election in a landslide defeat, there would be someone else to appropriate blame to. Who knows? Maybe this is exactly what the KMT needs to save the falling Chu from further disgrace. Furthermore, the announcement of Wang as a vice-presidential candidate came siix days before China and Taiwan enters into negotiations for another trade pact. It would be an old tactic of the KMT to cover up the negotiation process of the trade pact with past scandals of Wang’s being broadcast on repeat during news coverage and little coverage being devoted to the trade pact as a result. All in all, it seems to be of no surprise that KMT picked Wang out of their talent pool; this is politics after all—and some sacrifices may be what are needed.