The 121st Day of the Songyan Occupation

From Occupation to Reoccupation?

ON ITS 121ST DAY, the longstanding Songyan occupation, protesting the unlawful cutting down of trees in the area outside the site of the future Taipei Dome, near Songshan Cultural and Creative Park, faced its greatest tribulation to date. A police raid upon the occupation encampment was conducted at 2 AM which, according to those present, brought in approximately forty to fifty police officers.

Three cleaning squads were deployed and the occupation encampment was broken up; its tents and equipment were dismantled, then loaded into three trucks and driven off into processing. By 2:30 AM, the encampment had been completely taken apart. 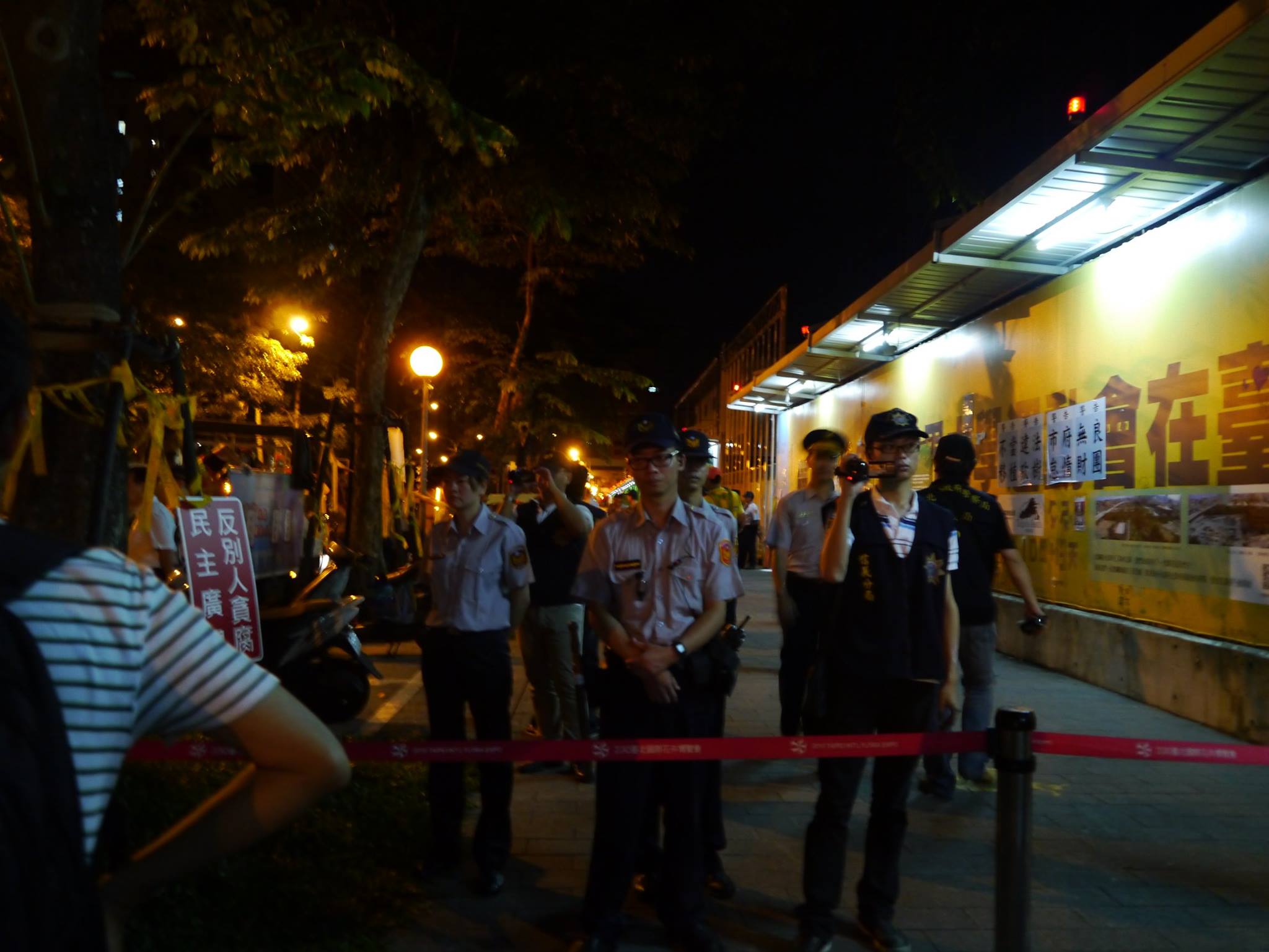 At the time, five people were on site in the tent that occupiers had been residing in for some time since the beginning of the occupation on April 25th of this year. When the author arrived at approximately 3:00 AM, twenty people had gathered, largely consisting of the members of the Taiwan Tree Protection Coalition (台灣護樹團體聯盟) responsible for maintaining the occupation.

It may have been a result of the late hour or the fact that by the time coalition members could respond the occupation was entirely dismantled, but few call-outs were made via social media. So it appears that few of those who were not members of the Taiwan Tree Protection Coalition mobilized as a response. No journalists apart from myself were on site, Chinese language media included; only later did the media respond, largely attempting to gather details through social media and conducting interviews after the fact.

The tent that occupiers had been residing in was erected after the first three days of the occupation and housed the everyday necessities that occupiers required to maintain inhabitable living conditions for the encampment. For one, fans, given the heat of summer through which occupiers had nonetheless sustained itself. But after police had finished, two portable generators were the only equipment that was not seized.

THE CONSENSUS AMONGST occupiers seemed to have already been settled by the time I arrived: the occupation must be maintained, or else the trees they had spent to much time protecting would be cut down without resistance. What remained was to figure out how to do so and how to not let the seizure of their property pass by without registering dissent.

The atmosphere on site was tense in the wake of the eviction but remained cheerful. Even in the confrontations with police that followed, humor remained a constant among occupiers. 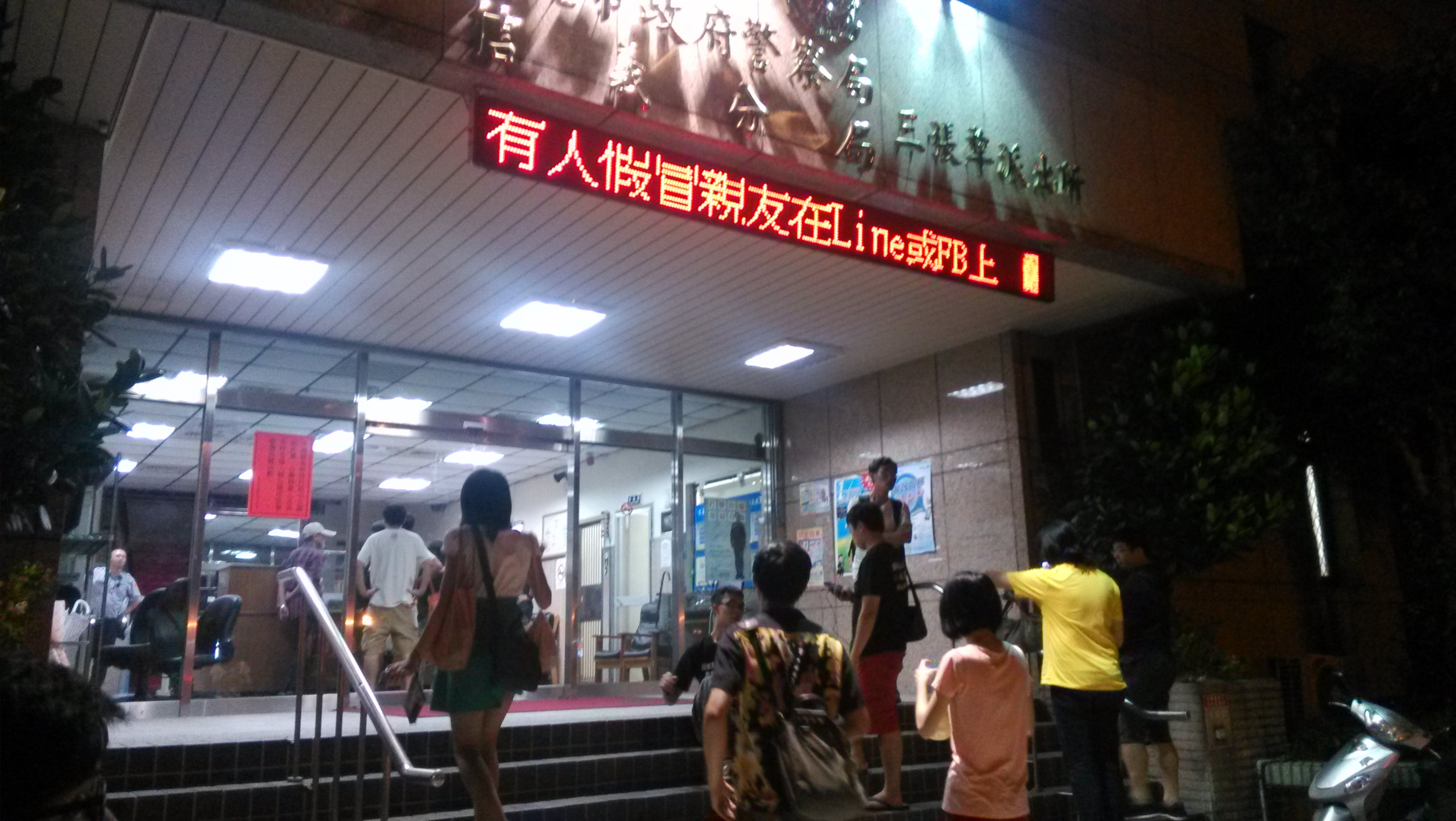 At about 4:00 AM, the majority of occupiers left the occupation site, with two people left behind to keep an eye on things, to gather at the Xinyi Precinct Taipei City Police Department. A verbal confrontation with the police ensued for the next hour, with occupiers demanding to know where the encampment equipment had been moved to, under what legal pretense did the police take action, and also expressing more generally their motivations for maintaining their eviction. As one of the occupiers told me in conversation, the police are legally entitled to remove what is deemed “litter” or “garbage,” but not if the owner is present. In this case, supposedly the police would have overstepped their boundaries. 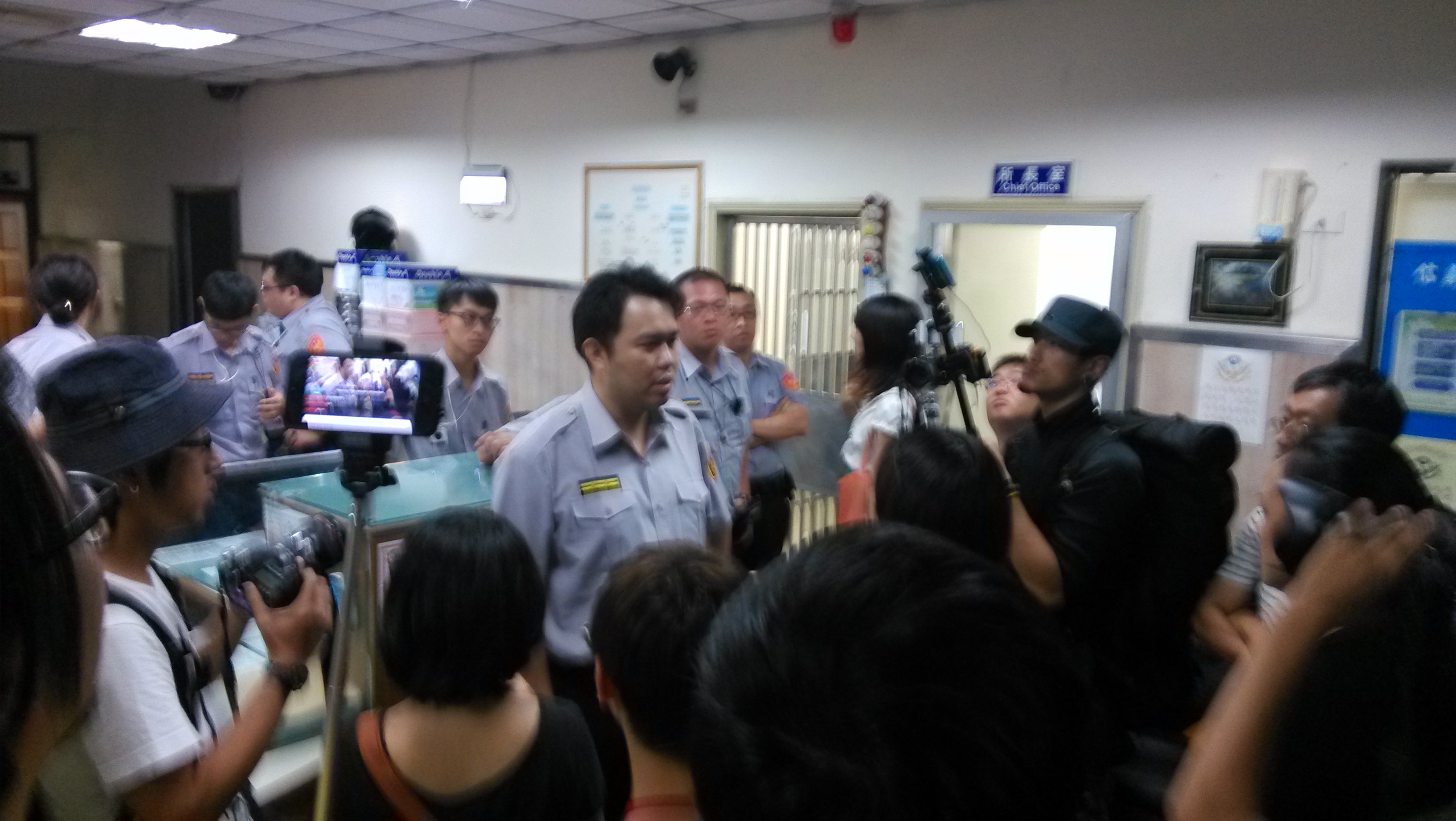 Police officers generally remained unmoved by these more abstract complaints, citing a warning given on August 13th that the occupation needed to be removed by August 15th. They were at first unwilling to reveal where the equipment from the dismantled occupation had been moved to, but police officers eventually revealed that it had been moved to the Fude Road Police Station, also in Xinyi, and that occupiers could go there to recover everything.

This was not without incident. At approximately 4:16 AM, an officer, though not the leading spokesman of the police, demanded that the occupiers leave the station. At 4:40 AM, officers began to attempt to remove occupiers from the station, stating that if occupiers wished to register their complaints, they would have to do so and leave. By 4:50 AM, occupiers had been removed from the station, except for several spokespersons who were allowed to remain within to negotiate with officers. While occupiers had been careful to film policemen in order to monitor their behavior, police officers later responded in kind by filming all of the occupiers present, carefully recording each and every one of their images on video. 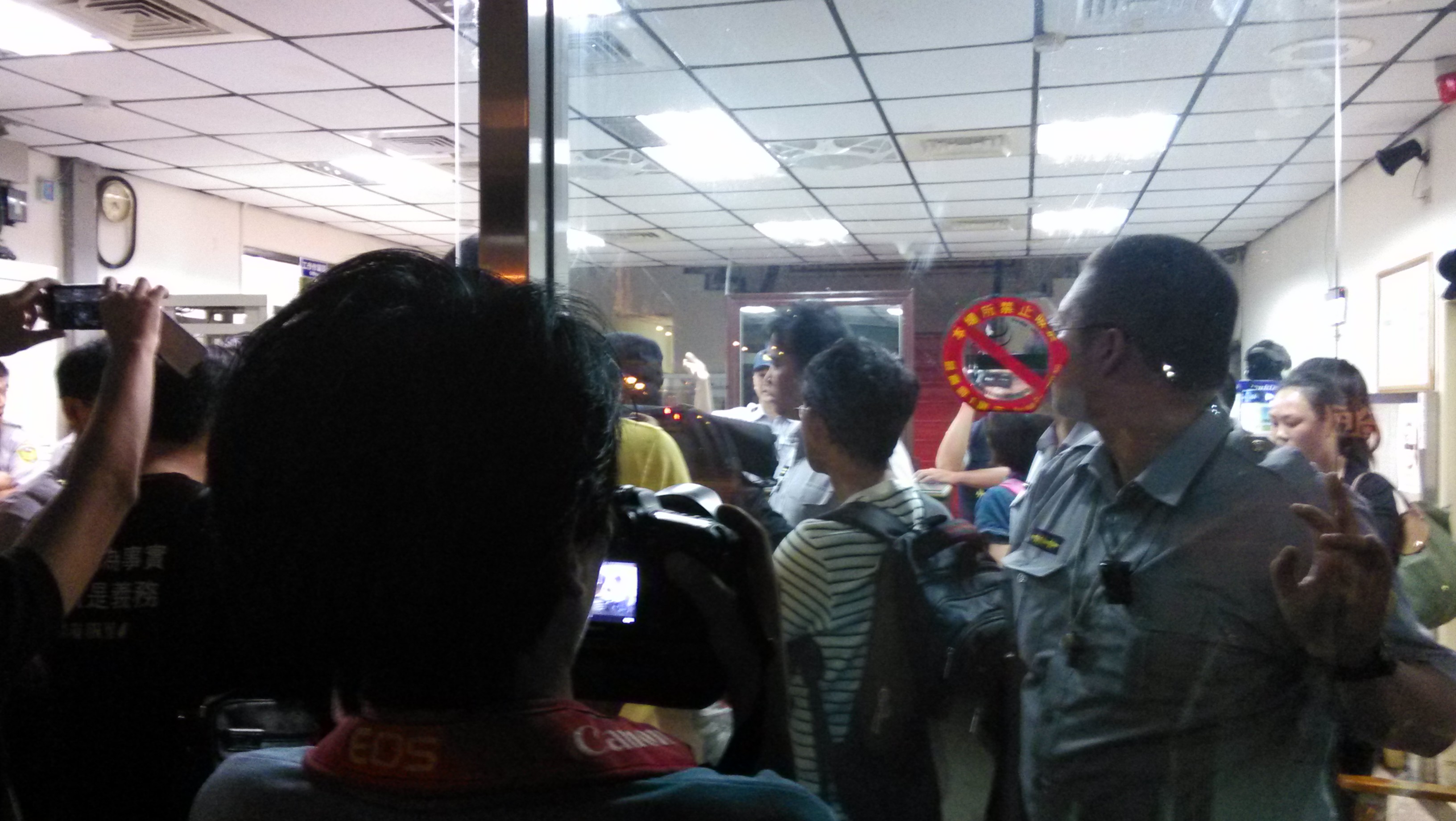 Officers beginning to attempt to remove occupiers from the station at 4:40 AM or so. Photo credit: Brian Hioe

After first sending someone to confirm that their equipment and property was indeed there, occupiers moved from the Xinyi Precinct Taipei City Police Department to the Fude Road Police Station. From there, occupiers began the process of moving their equipment back to the former site of the occupation encampment, opening up the boxes their equipment had been packed into, checking that the police had in fact registered correctly the contents, then loading everything into the one truck that they had on hand. This would be a process that would take some time. Nevertheless, after recovering their equipment and property, the occupiers intended to go back to Songyan and rebuild their encampment—which appeared to be tacitly agreed upon, without need for debate.

I recall an older man who was with the occupiers but also expressed some disagreement with other occupiers. The occupier who were arguing with police in the police station loudly stated at one point that he was there for the trees, the police might as well keep everything else. But perhaps why occupiers were so intent on reclaiming their equipment and property is because of how the occupied space had become something precious to occupiers in and of itself. After inhabiting that space for so long in their occupation, it would be hard not to feel attached to the physical environment of the occupation itself. The dismantlement and removal of the occupation, then, could only be experienced as a wound might be. 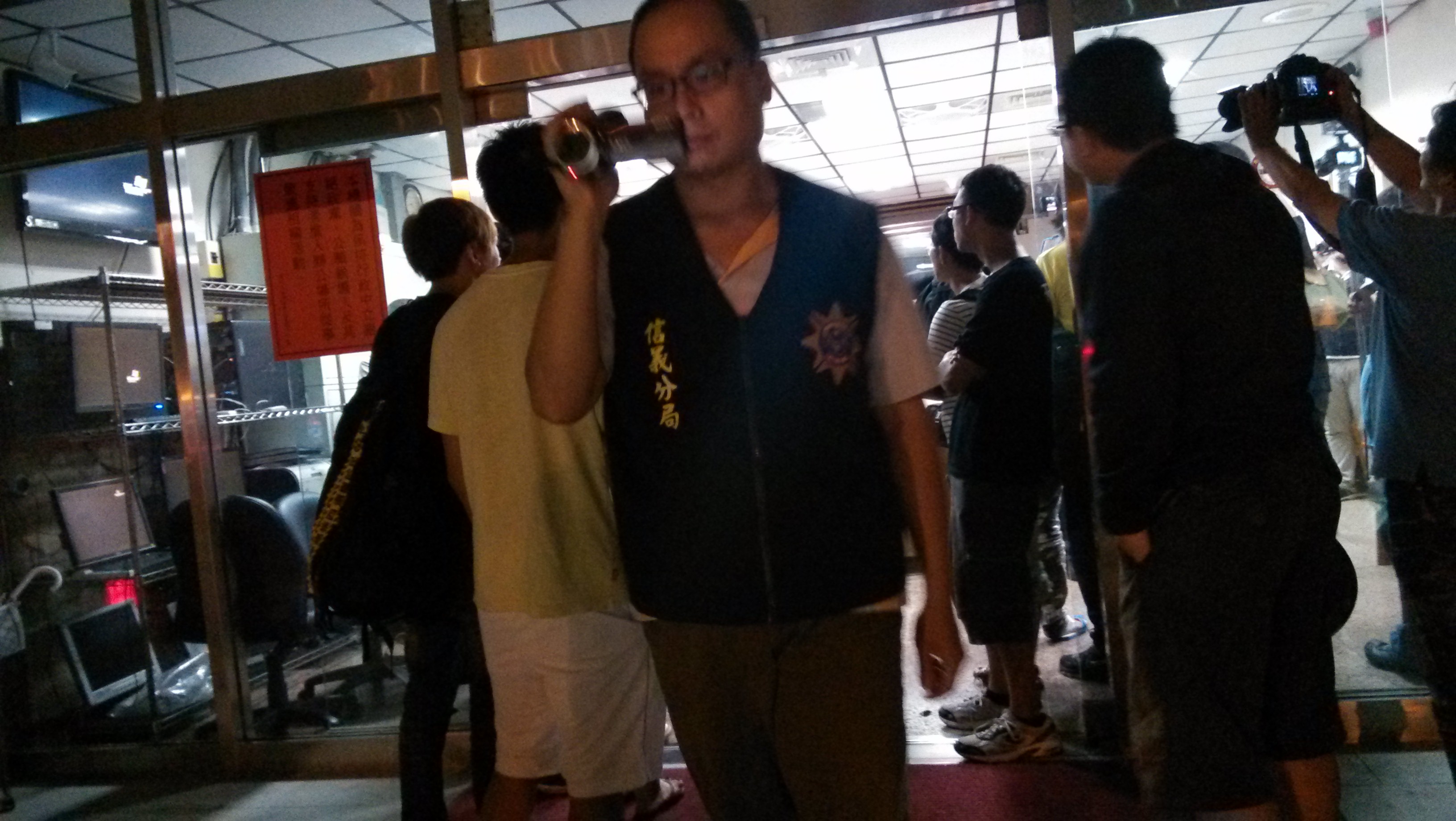 UPON INITIALLY ARRIVING on site at 3 AM, when the eviction was still a very fresh wound, I interviewed Taiwan Tree Protection Coalition spokesman Pan Han-Chiang. His comments proved elucidating about the motivation of occupiers.

“What do these trees represent for you in regards to this occupation?” I asked. “Especially for international readers that may not know contextual information. Would say it’s a question of preservation, in regards to that in Taipei, what is old or has history is dismantled for the sake of urban renewal or commercial development?”

“Well,” said Pan, “this is not the only example in Taipei, it’s not just Songyan. When there is land which can be used for development, this happens.” Pan went on to cite several examples in Taipei, including the Huaguang Community, and the demolition of the Wang family home in Shilin. According to Pan, while in Taipei there is Songyan, among others, in the entire country of Taiwan, there are twenty to thirty tree protection activities concerning the preservation of trees with history. 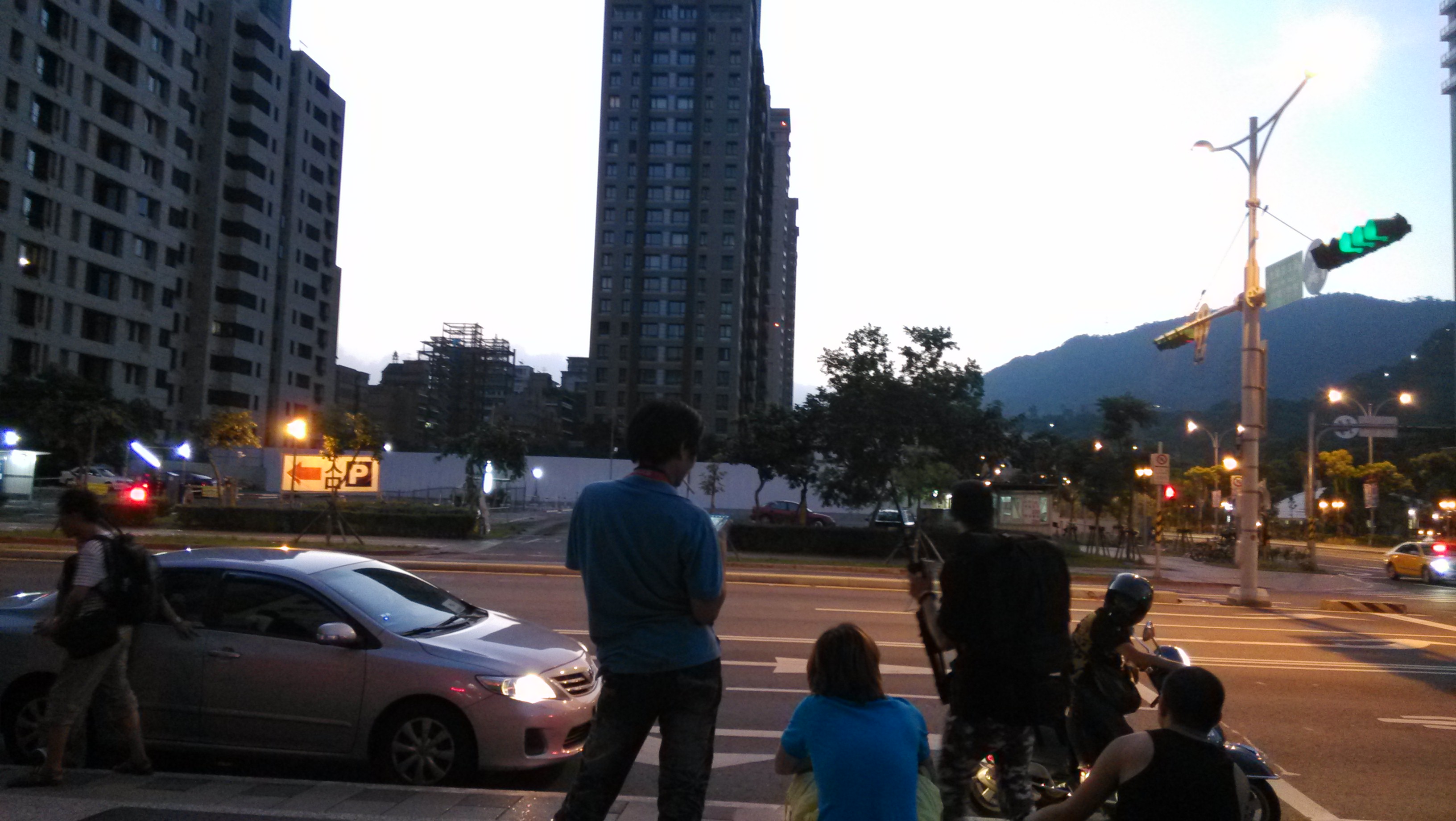 Nevertheless whereas urban redevelopment has largely been a major issue among activist groups, it would appear that the issue of tree preservation is quite specific. Around the beginning of the Songyan occupation, it came as a matter of some surprise to the author that the matter of trees with historic value being cut down for the sake of future construction could in fact become one which concerned activists across the country and, in fact, be sufficient cause to maintain a longstanding occupation.

Certainly, part of the issue would seem to be the Farglory Construction Company building the Taipei Dome’s use of bribes to secure contracts, employment of gangster violence to intimidate critics such as the Songyan occupiers, and its cutting down trees as a illegal cost-cutting measure. In terms of more structural causes, the issue would be Taiwan’s longstanding question of democracy that has taken center stage in recent months, whereby the Taiwanese government often blatantly defies the popular will where it looks like there might be an economic opportunity—no matter what the costs might be otherwise for Taiwan’s environment or for the Taiwanese people.

Yet the issue of trees in Songyan would also reflect something quite particular about Taiwanese civic society. That trees can, in fact, become something concerning of all of Taiwanese society. That Taiwan is a society in which there is such concern with social issues that what would go by without blinking in another society can become a national issue. 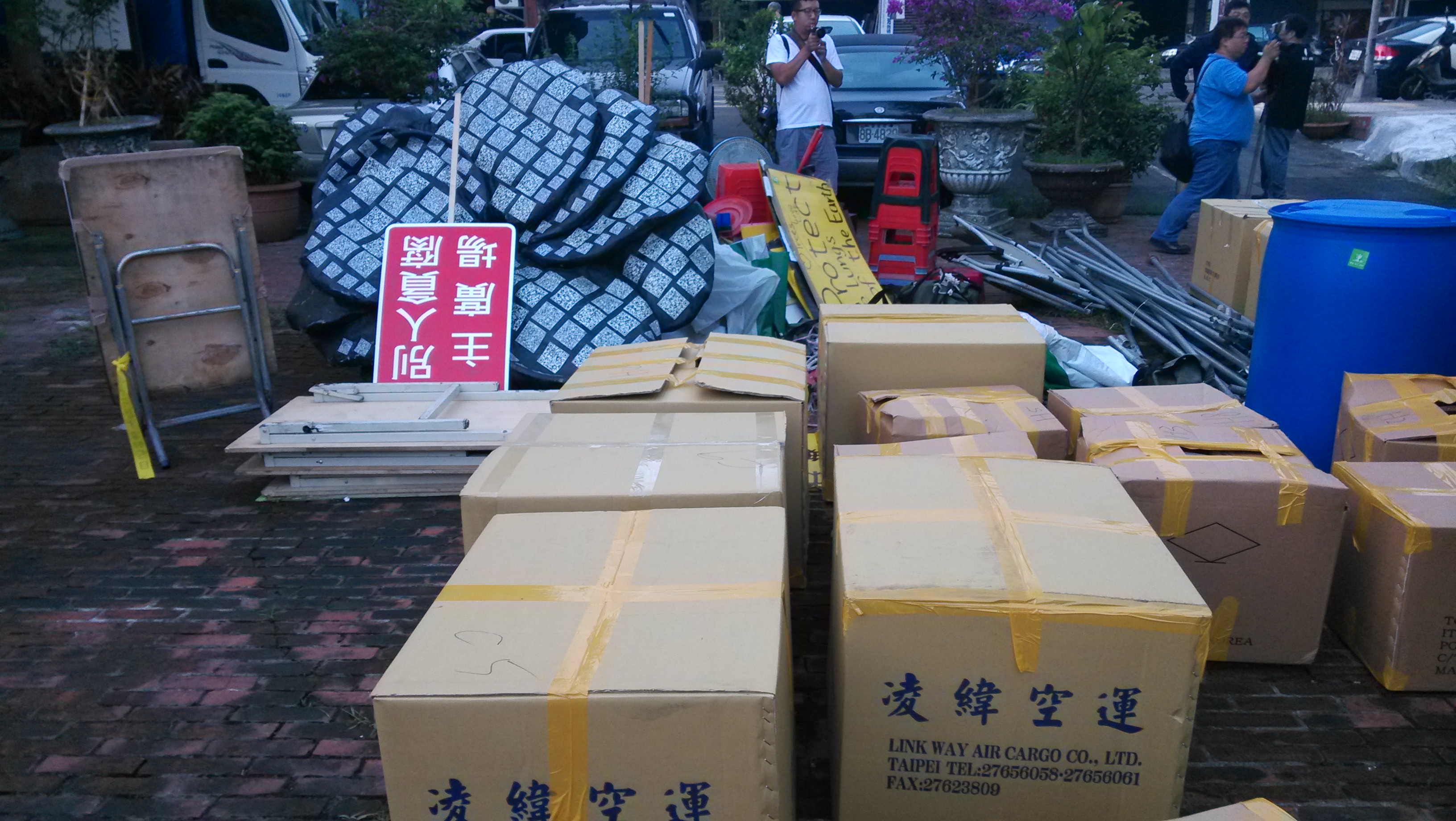 AS THE FUDE ROAD POLICE STATION is located next to a public park, during the long process of unpacking and repacking equipment and property through the early morning hours, I witnessed the rather strange juxtaposition of Taipei waking up and going through its early morning motions with the occupiers as they were rummaging through and sorting out their belongings.

At one point an old woman on her early morning walk cut in and asked what everyone was doing. “We’re moving house!” one of the occupiers shouted cheerfully in response. Even some of the police officers standing by, watching the occupiers’ activities, laughed at that.

Yet I watched Taipei’s elderly gather for yoga in the park, largely indifferent to the younger people sorting through their dismantled occupation, I could not help but feel that this reflected something about the plight of Taiwanese activism more generally. 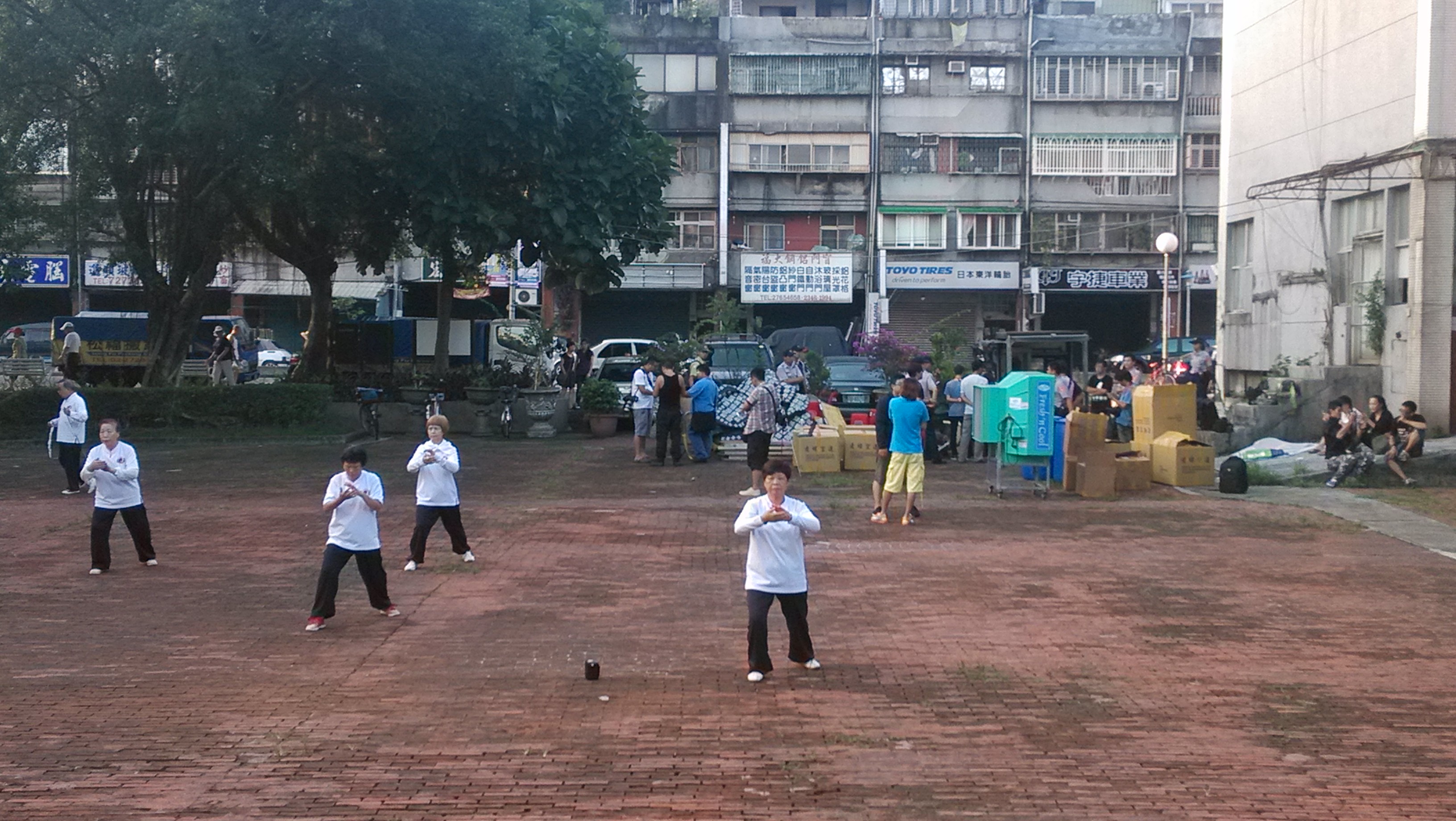 Society at large goes on with its everyday, quotidian routines. At the same time, there are groups of highly motivated individuals goes on trying to change society for the better constantly working—but they are sometimes ignored, or their actions fade invisibly into the background.

The Songyan occupation received a lot of attention immediately after the Sunflower Movement, but it hadn’t been in the spotlight for some time. While the occupation would seem to have created close ties of camaraderie between the members of the Taiwan Tree Protection Coalition, it would not surprise me, either, if with that small amount of people, they sometimes have trouble maintaining the encampment site.

When I left around 7 AM, the first load had been packed into the truck on hand and it was set to depart for Songyan once more. The intension of occupiers at that point in time was to move all their equipment back to Songyan, sleep, then unpack everything from the boxes it had all been packed into, contemplate media strategies, and rebuild their occupation. Back to the beginning it was, said some. Because for the first three days of the occupation, there was no encampment, and they just slept on the side of the road. 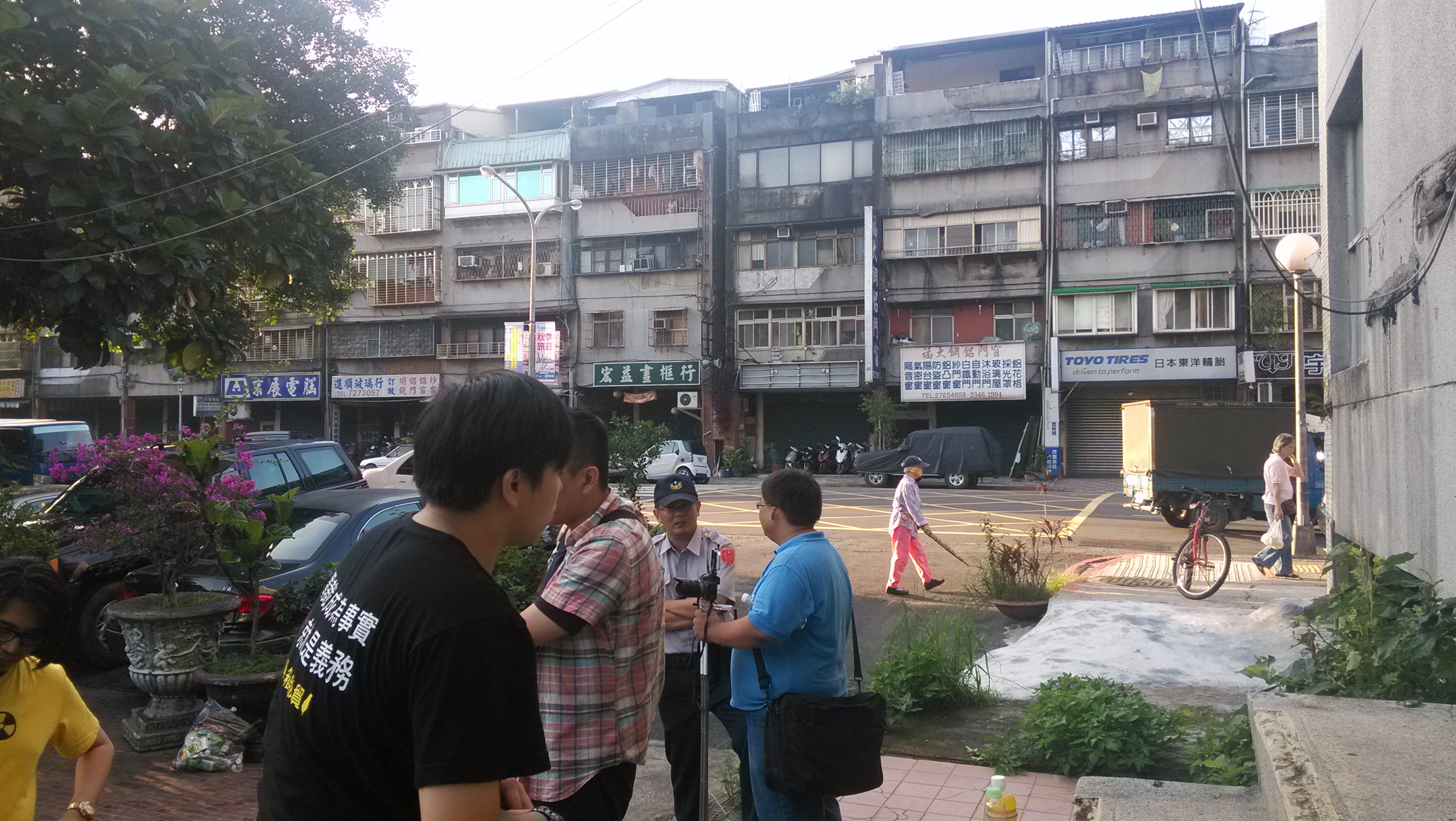 Will they succeed in reestablishing their occupation, beginning again from scratch? Will they be able to succeed in the long-term? I could not come to any conclusion as I watched them do so. But, I thought to myself, it will certainly depend on arousing the public from the apathy of the everyday if they are to succeed.