16 DOMESTIC CASES and nine imported cases were announced at the Central Epidemic Command Center (CECC) press conference today. Six of these cases were already in quarantine. Five deaths were also announced. Nine cases were in Taipei, five cases in Taoyuan, and two cases in New Taipei. 87% of cases to date have been released from quarantine and nine of the 16 domestic cases have known sources of infection. Six of the nine imported cases are from the same group.

The CECC stressed need for increased manpower and arrangements to be made at Taoyuan International Airport for testing individuals entering Taiwan. Sometimes arrangements are made depending on how many planes arrive at once, rather than the total number of cases. Of 83 workers involved in testing, only two have not been vaccinated due to special circumstances, while second-dose vaccination for such workers will be carried out as a special project. Additional measures for individuals entering Taiwan will be announced online tomorrow. 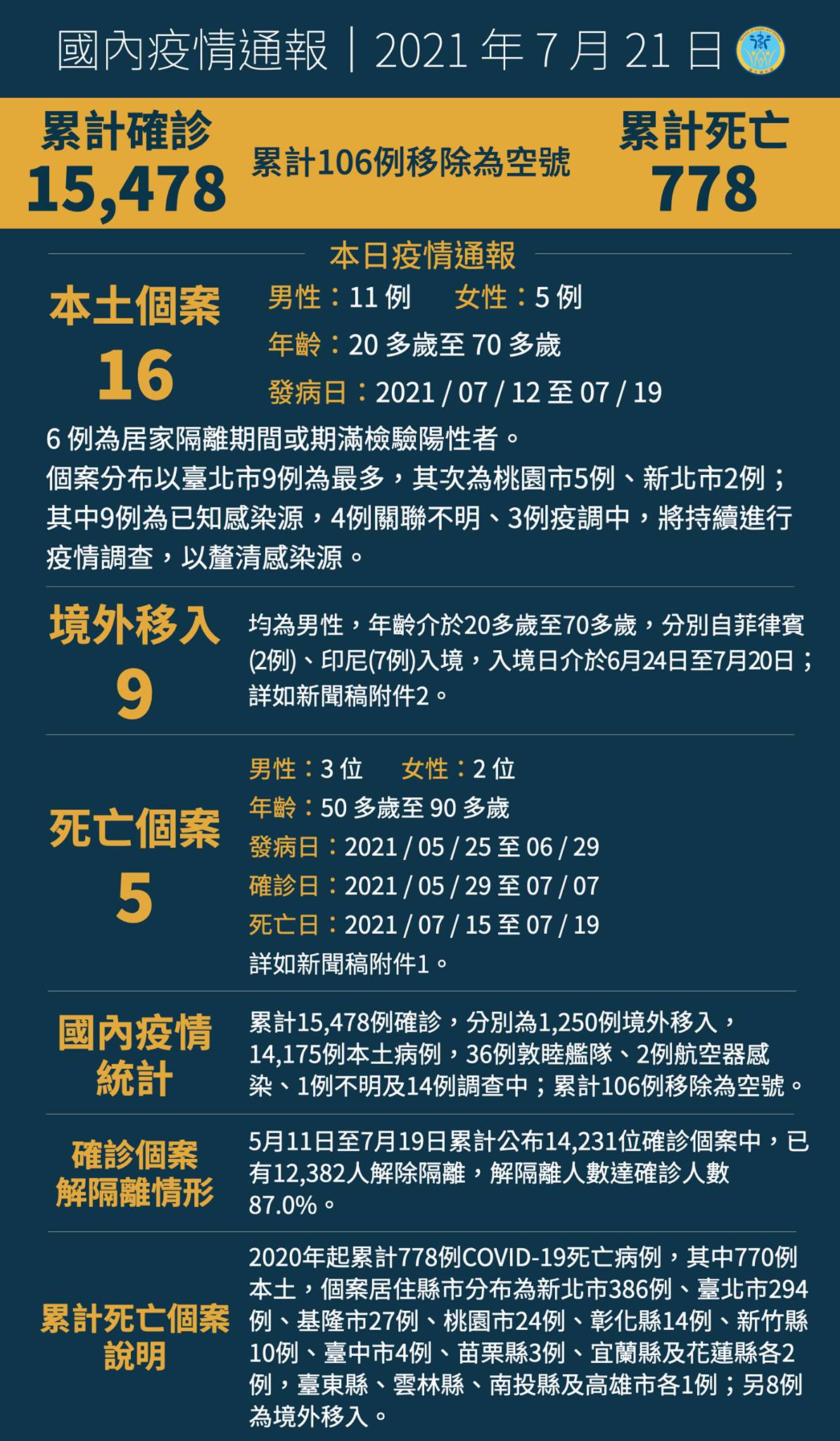 Tzu Chi has announced that it has signed a contract with Fosun for the purchase of five million BioNTech vaccines, following the model previously established by TSMC and FoxConn. According to the Executive Yuan, the process for purchasing vaccines was faster because this model was established by TSMC and FoxConn. The Executive Yuan cannot reveal the schedule for the arrival of these vaccines because of confidentiality, but they are expected to arrive in installments, rather than all at once. The CECC thanked Tzu Chi for its vaccine donation today. Vaccines will be sent from the original manufacturer in Germany.

Upcoming vaccination appointments will be canceled if classes and work are stopped because of the approaching typhoon. When asked about vaccination for vendors, drivers, and babysitters, the CECC is focused on carrying out vaccination through its current system. If people receive notifications to make vaccination appointments but do not believe they are eligible, they may be in category nine but not realize it. This information can be checked on the National Health Insurance (NHI) system.

The CECC will discuss measures for Chinese students in Taiwan to be vaccinated, since they may not have Alien Resident Certificates or NHI.

The CECC is still reviewing not only information from abroad about the safety and efficacy of mixed vaccinations, but from domestic testing. The CECC is cautious of using Medigen vaccines for second dose vaccinations currently, due to lack of information, but this will be considered through test results.

More information on the manufacture of Medigen will be revealed in time. The CECC will also publicize what available information there is regarding the meeting that agreed to pass Emergency Use Authorization (EUA) for Medigen vaccines.

The odds of the COVID-19 alert level being lowered continue to be high if the situation remains stable. The CECC will announce measures for the relaxing of measures in the next few days. This will include relaxing the restriction on indoor gatherings of more than five people. Although the proportion of confirmed cases is increasing, the CECC stressed that cases overall are down. 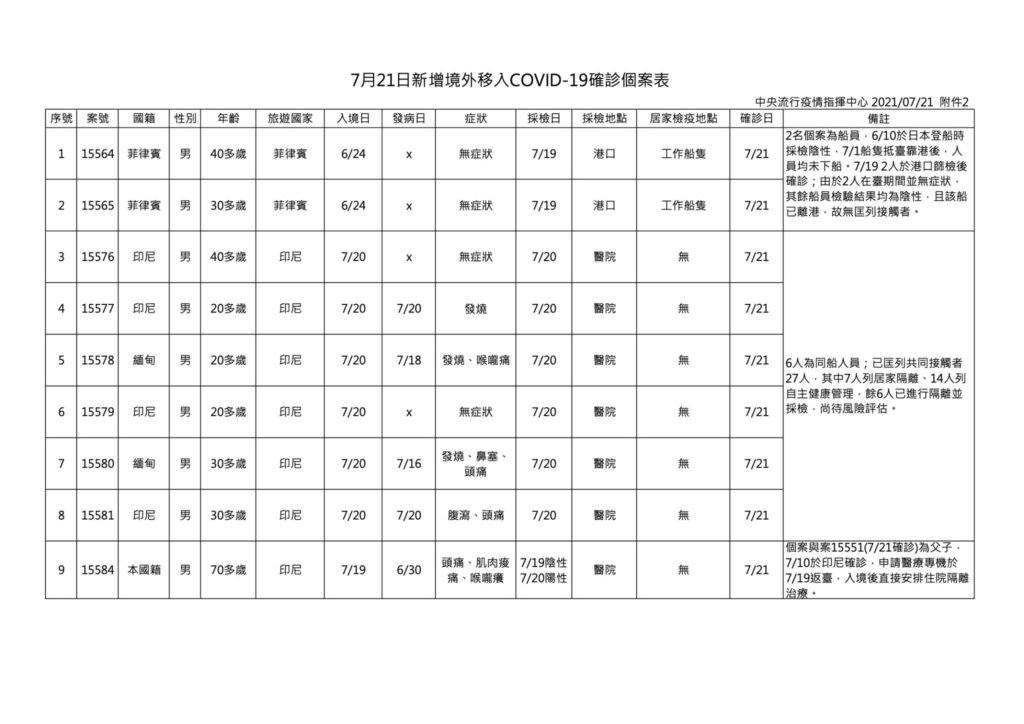 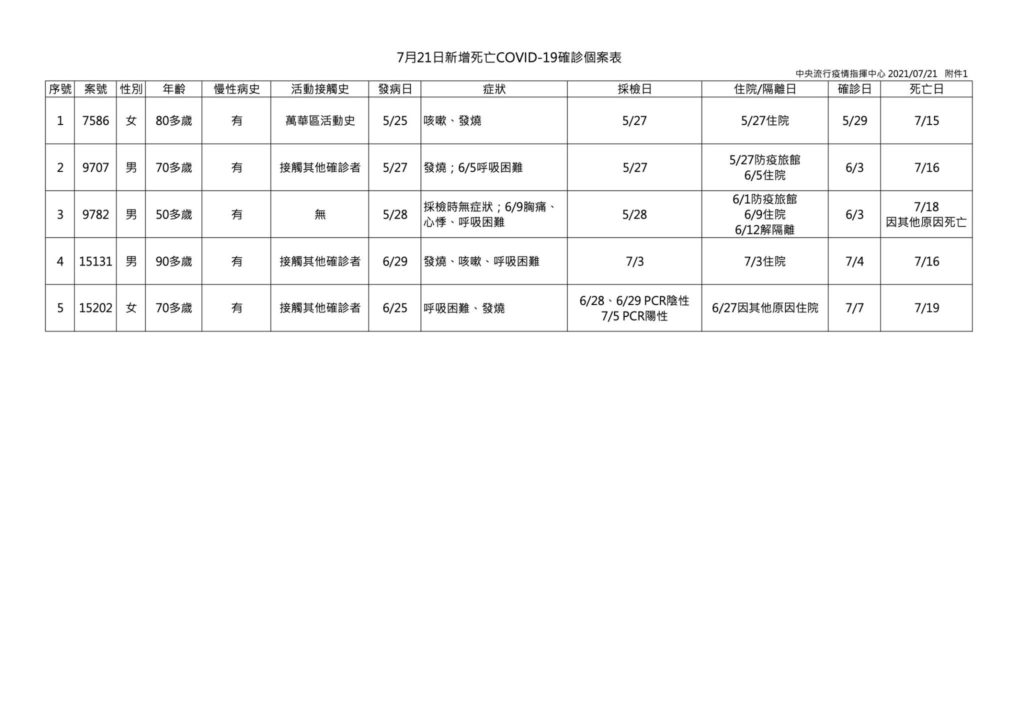 Information on the imported cases from today (left) and on the deaths announced today. Photo credit: Ministry of Health and Welfare/Facebook

A dermatologist that originally tried to hide his occupation and travel history after being infected with COVID-19 has been fined 160,000 NT. This included traveling to a World Gym.

KMT legislator Lee Guei-min has called on legislators of the pan-Green camp to vaccinate themselves with domestically-manufactured vaccines, if they find this to be safe. This takes place shortly after KMT chair Johnny Chiang filed corruption charges against Chen Shih-chung for passing Emergency Use Authorization for Medigen vaccines.

Tainan mayor Huang Wei-che has come under fire for stating that he intended to vaccinate Japanese nationals to thank Japan for its vaccine donations, but the city being accused of not implementing this policy.

80% of small to medium-sized enterprises have experienced declines in revenue during the level three alert.

Discussions are underway regarding reopening centers for treating individuals with dementia.

With United Biomedical’s vaccine also expected to receive EUA soon, its major shareholder, Formosa Plastics Biomedical, has sold 2,106 shares of its stocks in the company. This reduces its shares from 13% to 11.13%

In comments during New Taipei’s daily press conference on the COVID-19 situation, New Taipei mayor Hou You-yi emphasized that it is necessary to keep in mind how cases have exploded elsewhere once measures have been relaxed.

1,228 tests have been conducted at the Mitsui Park Outlet in Linkou, all of which are negative. The outlet will only be allowed to reopen once it is clear that all workers have been tested. A decision will be made on whether to cancel vaccination appointments because of the incoming typhoon. Further evaluations will be made tomorrow, as it will only be clear as to the effects of the typhoon one or two days in advance. 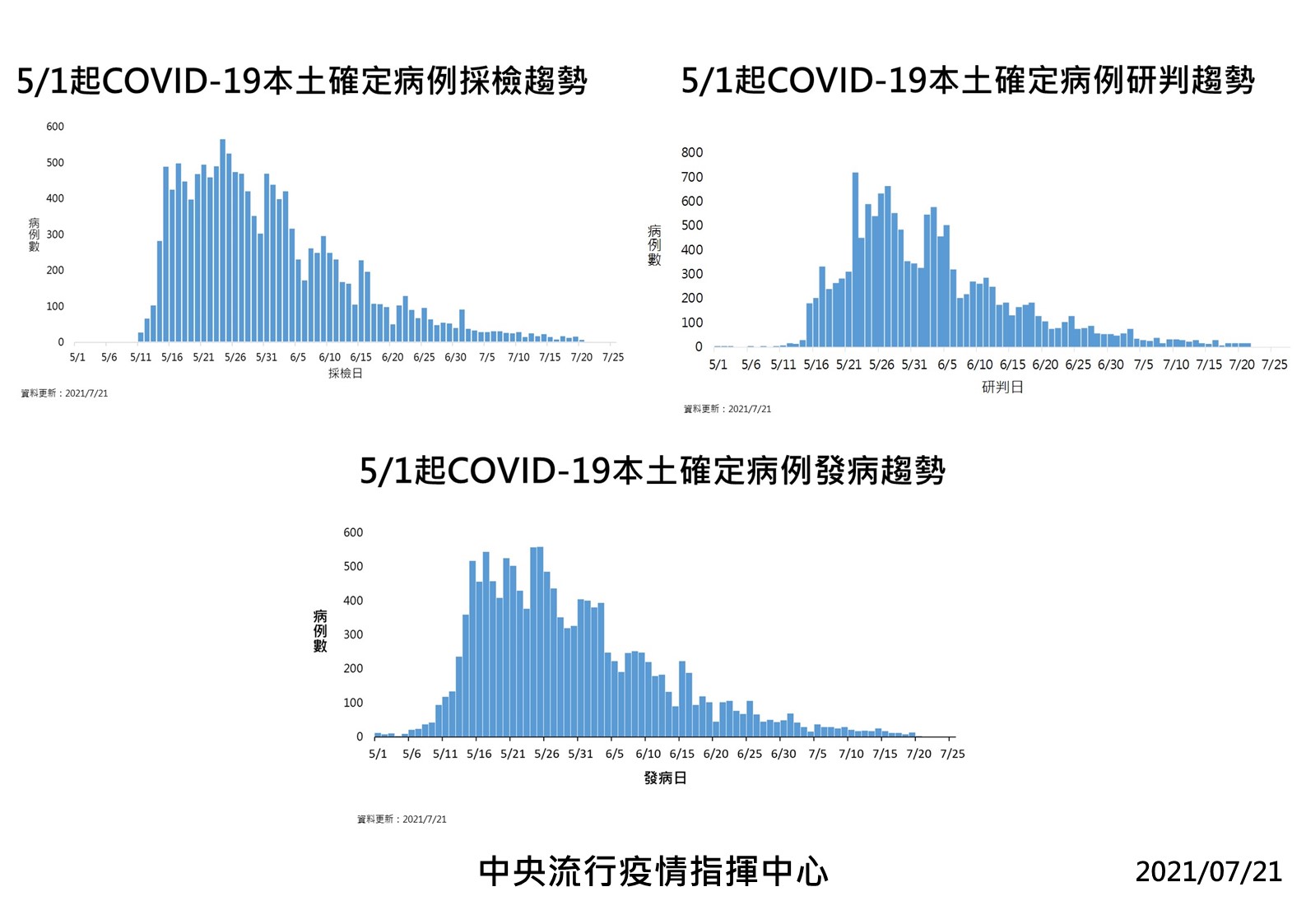 Otherwise, New Taipei claimed that few would oppose strengthening domestic capacity to manufacture vaccines through developing domestic vaccines, but that the public is concerned about the safety of untested vaccines, calling for the process not to be rushed. New Taipei claimed that Tzu Chi being approved to purchase BioNTech vaccines is a sign that the central government realizes the honesty of non-government organizations in seeking to purchase vaccines and that it believes this will lead to other groups purchasing vaccines in the future. As the central government has indicated that vaccine supply is ample, it is possible that this will lead to conflict in the future, if other non-government groups seek to purchase vaccines.

Taipei mayor Ko Wen-je claimed that statistics are delayed up to four days in reporting in trends, due to the fact that Taiwan reports based on onset of symptoms, not date of confirmed diagnosis, resulting in a one to two day delay, and there is a one to two day delay in reporting results. Ko also stated that Wanhua is no longer a hotspot and cases are not concentrated in any specific district of Taipei, with cases in six administrative districts of Taipei today, making it hard to address these cases.

The Taipei city government stated that it would add a layer of relief measures to those offered by the Ministry of Economic Affairs, particular for a Wanhua, which is the most affected area. Some sports facilities, such as tracks at schools, will be opened up though restrictions on equipment will remain. Childcare facilities will be opened up between July 26th and August 9th. Ko otherwise stated that Taipei is hoping to vaccinate children with BioNtech, seeing as it is the only vaccine with testing on children between 12 and 18 years old, and that with proper planning, no age groups would feel excluded from the vaccination process.