THE KO ADMINISTRATION continues to be embattled regarding the longstanding Taipei Dome debacle, which has dogged his administration from the beginning of his term. The latest chapter in this would be accusations of Ko asking city councillors to resign if they refused to submit to a polygraph test, in order to determine who was behind a media leak in which the results of a survey Ko had sent to city councillors regarding what should be done with Taipei Dome were leaked to Storm Media. Ko has been accused of bringing back “White Terror” methods through his actions and of attempting to shift blame to others, it is also raised that polygraph tests are sometimes inaccurate. Ko has denied forcing employees to take polygraph tests, however.

Riding into office on his initial wave of popularity, Ko’s stance against Farglory Group’s construction of the Taipei Dome was initially a popular one. This was in line with criticisms of safety standards during the construction of the structure, the large expenditures involved in the project, the cutting down of protected trees with historic value on-site, and the use of construction company affiliated gangsters as intimidation against protestors against tree-cutting. Ko was then seen as a politician willing to take on tycoons such as Farglory Group owner Chao Teng-hsiung, who dealings are conducted with the backing of KMT politicians. 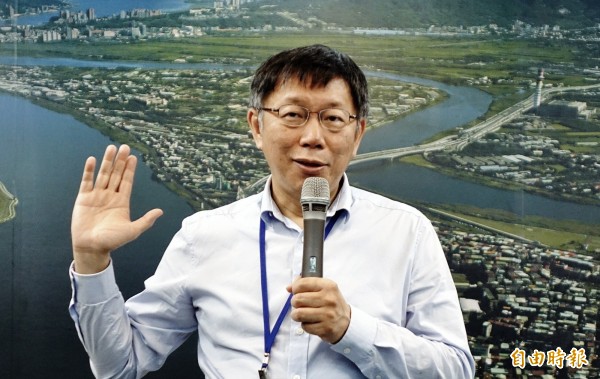 This attitude came to be seen as more broadly true of Ko’s administration as a whole. Even as Ko rode into office as something of a populist politician, the public has now turned against him for his failures to achieve pragmatic solutions. Worse, Ko’s frequent and loud tirades on matters as the Taipei Dome debacle were seen as attempts to distract from his own inability to settle matters, and Ko’s failure to deliver on promises or going back on campaign promises altogether—particularly regarding issues of urban development—led to public backlash. Despite promises to preserve the historic Nangang Bottle Cap Factory during his mayoral campaign, for example, the eventual demolition of the structure under Ko’s watch was seen as a betrayal.

The list of urban development projects which led to scandal continued to increase as Ko’s term went on, which now includes Taipei Dome, the Taipei Twin Towers, Songshan Cultural and Creative Park, the Syntrend Digital Park, and MeHas City. Problems of traffic congestion in Taipei from the construction of bicycle lane would be another heated issue. At present, regarding these and other scandal-ridden causes of the Ko administration, his city government has suffered a flight of officials.

Recent accusations of resorting to coercive methods also come out of an acquired reputation for authoritarianism on Ko’s part. Ko has been frequently unable to tolerate criticisms, lashing out at members of the public who have criticized his policies or at critical members of the media.

Despite being for the most part anti-KMT and pro-Taiwan, in his numerous gaffes, Ko has expressed nostalgia for the Chiang Ching-Kuo regime as a period in which Taiwan was able to develop its economy and in which policy was able to accomplish it aims—never mind the White Terror under Chiang. But if charges of resorting to “White Terror” methods are now thrown at Ko in the present, in light of Ko’s nostalgia for the Chiang Ching-Kuo, this perhaps gestures towards issues as lying Ko’s authoritarian style of leadership, and public backlash against it.

As a politician often labeled as a “populist,” Ko came into office in some sense as a “strongman” type figure, who enjoyed the support of the public so long as he was able to get things done politically. In this sense, though autocratic in his methods for getting things done, Ko enjoyed popular support on this basis. So long as he could, in fact, accomplish things, and seemed honest and forthright in a way other politicians were not, some measure of authoritarianism in his posture contributed to how he was perceived as a different sort of politician than slimy politicians who made backroom deals and the like. Even Ko’s frequent public gaffes would have played into this, seeming to indicate how Ko was not a normal politician who conceals corruption with slick and polished veneer.

But the public have grown wary of this after Ko’s inability to resolve controversies, instead letting them drag out too long, attempting to pin blame on others for his own shortcomings, and displaying an authoritarian attitude through all of this. Ko is probably still not perceived as the sort of politician who is corrupt and makes backroom deals, but he is perceived as hypocritical nonetheless. So then, would it be that Ko’s approval ratings fell from 70% approval from when he was initially voted in to a current low of 38% approval, Ko currently being the most publicly disapproved mayor in Taiwan. And Ko’s popularity rating will probably continue to decline. We will see as to the future of the embattled Ko administration, then.