Art And Politics In Post-Coup Thailand: An Interview With Nutdanai “Nut” Jitbanjong

Since the 2014 military coup in Thailand, the Thai art community has at times encountered issues with the ruling junta. In mid-2017, military officers visited two art galleries and ordered them to remove controversial photographs without giving any justification.

Likewise, with continuous increases in the budget allocation to the Ministry of Defense in past years, funding for the arts in Thailand is increasingly insufficient. This has led Thailand’s non-profit art oasis, the Bangkok Art and Culture Center (BACC) to consider cutting opening hours, something some also think may be a product of that BACC seemed to be a place where anti-coup protesters were organizing activities.

Under conditions in which freedom is heavily curbed, artists are expected to self-censor. However, instead, one finds that art exhibitions whose themes are steeped in notions of “liberation” are increasingly common. The Khonkean Manifesto would be one such exhibition in recent times. The exhibition was displayed at a desolate building in Khon Kean province in northeast Thailand, a place, where from past to present, locals have always challenged the so-called fair rules.

I had a chance to strike up a brief conversation with Nutdanai “Nut” Jitbanjong, one of the artists who has an art installation at Khonkean Manifesto. Nut attended secondary and high school at Vajiravudh College. Nut’s work delves into Thai history that can seldom be openly discussed in today’s Thai society and explores the inner self.

Patrick Huang:  What is your inspiration to work on art relevant to history and politics?

Nutdanai Jitbanjong:  Well, I don’t think my work is directly related to history and politics. I started from exploring myself. It gave myself time and space to seriously see what is really me. And in order to understand myself, I need to understand the context of where I was born first. It’s culture. Environment. The way people are thinking. All of these elements finally contribute to my final products of artwork today.

PH:  Do you have any model artists? Who?

NJ:  I have some artists who inspire me but it is still difficult to say if they are my model artists. The word “model” seems perfect. [Laughs] Now I like to dip into a big pool of data and have time to muse on. As a researcher of a kind. And the style of my work can vary. It depends on the information at hand.

PH:  Given the current political situation in Thailand, do you have any trouble while working? What about self-censorship?

NJ:  I don’t think so. For every work, regardless of who is in power, I have to be careful in communicating. And as for self-censorship, I see it as an opportunity to find creatively different perspectives to present my ideas. This will pave the way for how I can be more masterful and professional in communication. 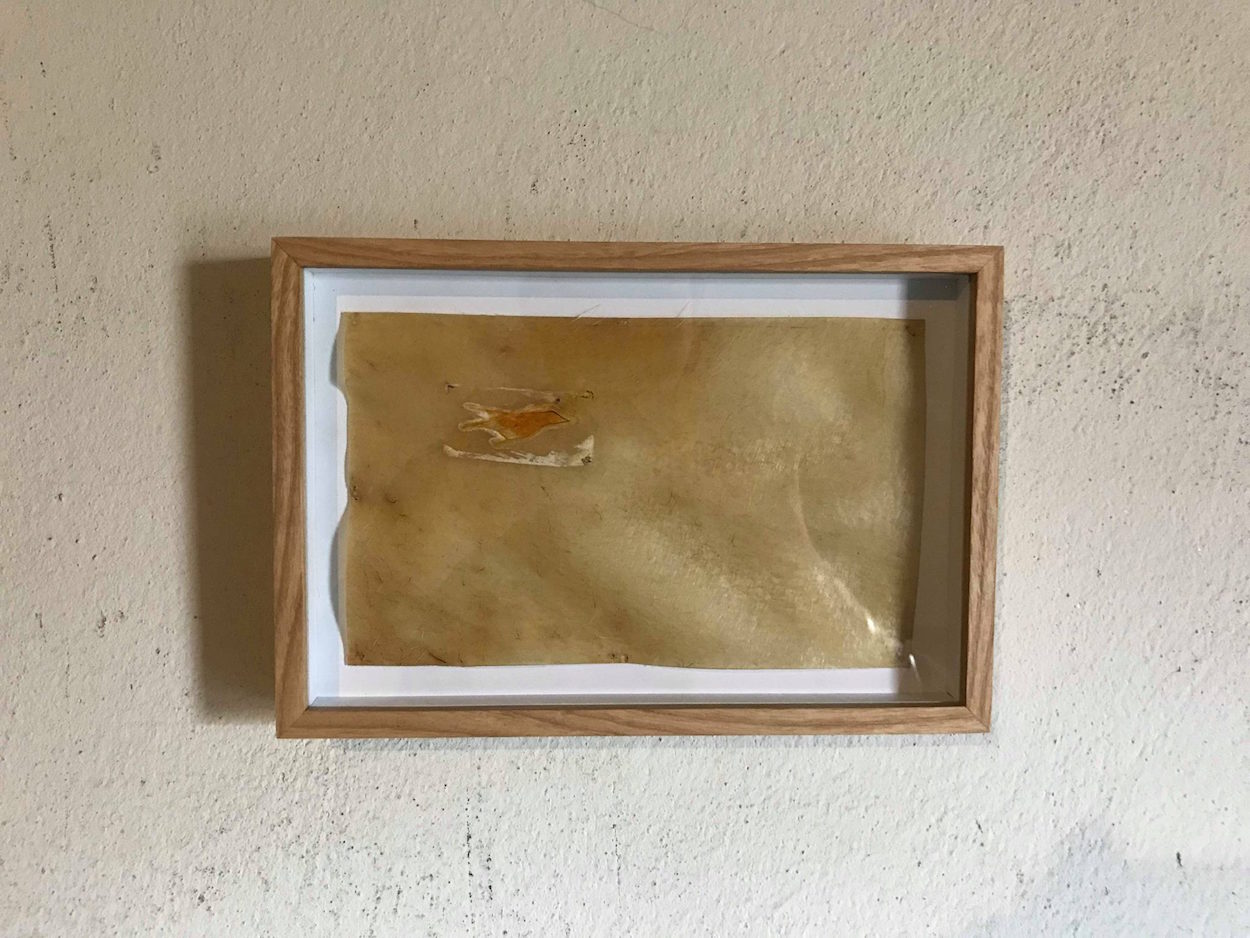 PH:  Your latest show was at Khonkean Manifesto. Could you share your impressions?

NJ:  Sure, it was an “alternative” art exhibition. [Laughs] It was held at a desolate building which used to be an office of a financial institution that happened to close more than 20 years, since the Asian financial crisis in 1997. Khon Kean was the destination chosen because it is the province in which Field Marshal Sarit Thanarat declared the first National Economic and Social Development Plan in 1961. It was to propel Thailand to modernity.

PH:  I have heard that military officers were also visiting. True? What did they do? Are they really art enthusiasts? [Laughs]

NJ:  True. The military was quite put on alert. They were trying to visit before the opening on October 6th. Well, to me, it did not come as a surprise.

PH:  Please tell us about your work.

NJ:  It was a site-specific installation. I intended to dredge up another dark section of Thai history which is still mostly censored out by our powers-that-be. It was concerning the 1976 Thammasat University Massacre. The haunting picture which led to my artwork shows “a dead university student was lynched on a tamarind tree and a civil boy scout slammed a folding a chair on him among an indifferent crowd.” It was taken by photographer Neal Ulevich who later won a Pulitzer Prize in 1977.

My work was a folding chair made of tamarind wood. And on the wall, was dried pig skin representing human skin, dried with heat. The position of the skin was placed in the same position as the folding chair in that incessantly haunting picture. Every time when my gaze was moving between my work and that picture, I felt it was not only an attack on that ill-fated university student but also on every single person who is still crusading for democracy.

At the opening, I had two civil scouts stamp “folding chair” on exhibition-goers’ wrists. I was also trying to communicate that the scouts were a political tool. But this time they were just put in a different context.

PH:  How about the feedback? Did people understand your message? Importantly, did the military understand? 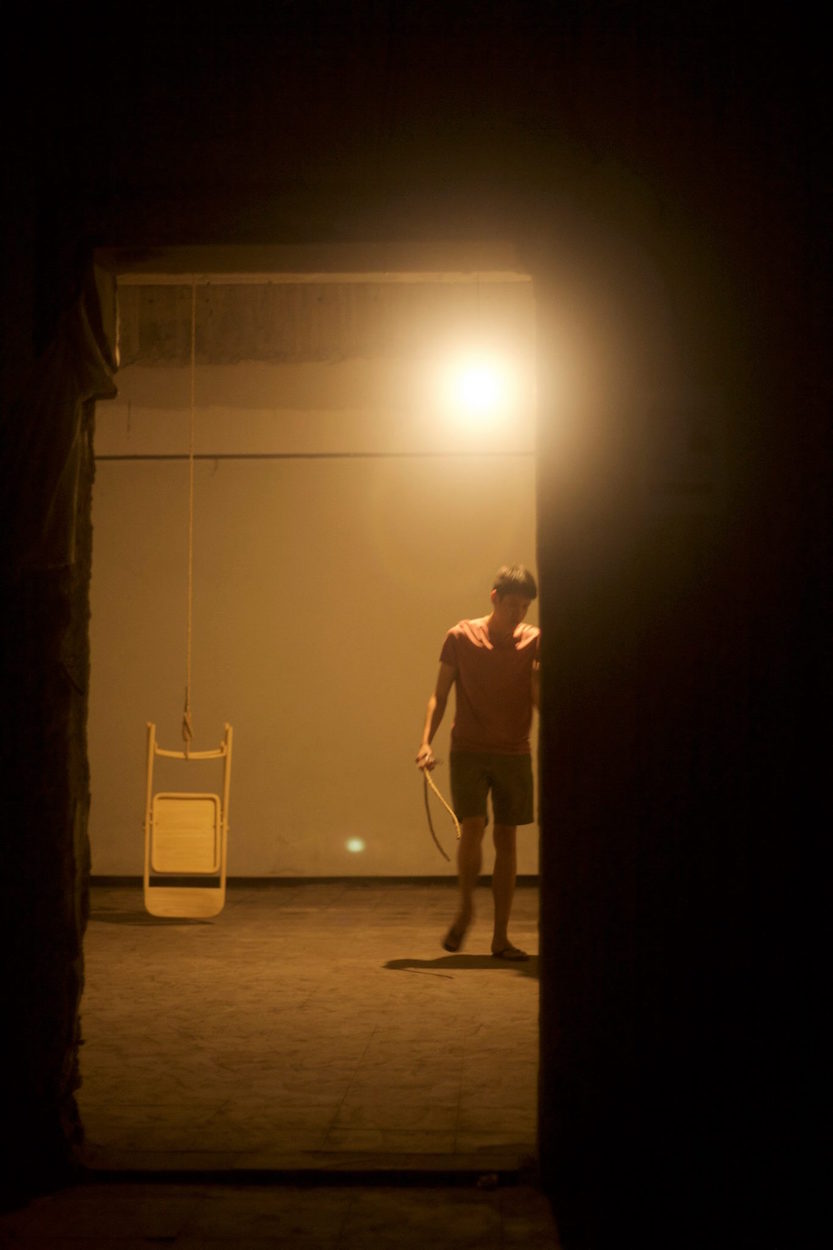 NJ:  People seemed to enjoy getting wrist-stamped. I think most people could get the underlying message. But many may not. As I said, it is history that the powers-that-be are attempting to sweep under the rug. And as for the military, they came because it was their duty.

NJ:  I’m truly excited. It’s my first interview for the international magazine. I have been on the road of art roughly 2 years (and studying 7 years). The show at Khon Kean is a milestone for me. I could express what I wanted, although the powers-that-be were trying to intervene. As for Taiwan, I haven’t been there. Hopefully, I will soon have a chance to show and discuss my work with Taiwanese fans. See you soon!