A VIGIL WAS held tonight in Liberty Plaza in Taipei for those that died in a fire in Urumqi, Xinjiang earlier this week. The rally began at 6:30 PM.

The fire occurred on Thursday, killing ten and injuring nine. A great deal of public outrage has ensued since then, seeing as firefighters appeared to have been delayed from reaching victims due to measures maintained by China as part of dynamic COVID-zero policies. Protests have taken place across China, including in Beijing, Shanghai, Nanjing, Chongqing, and Urumqi. The protests have been quite openly critical of the Chinese government, at times calling for not only an end to COVID-zero policies, but the downfall of the CCP and for Chinese president Xi Jinping to step down.

Outrage over the deaths in Xinjiang took place shortly after riots in Zhengzhou among FoxConn workers. Workers were demonstrating against the closed-loop labor system used to keep iPhone manufacturing lines continuing to operate, but subjecting workers to restrictions on their movement. 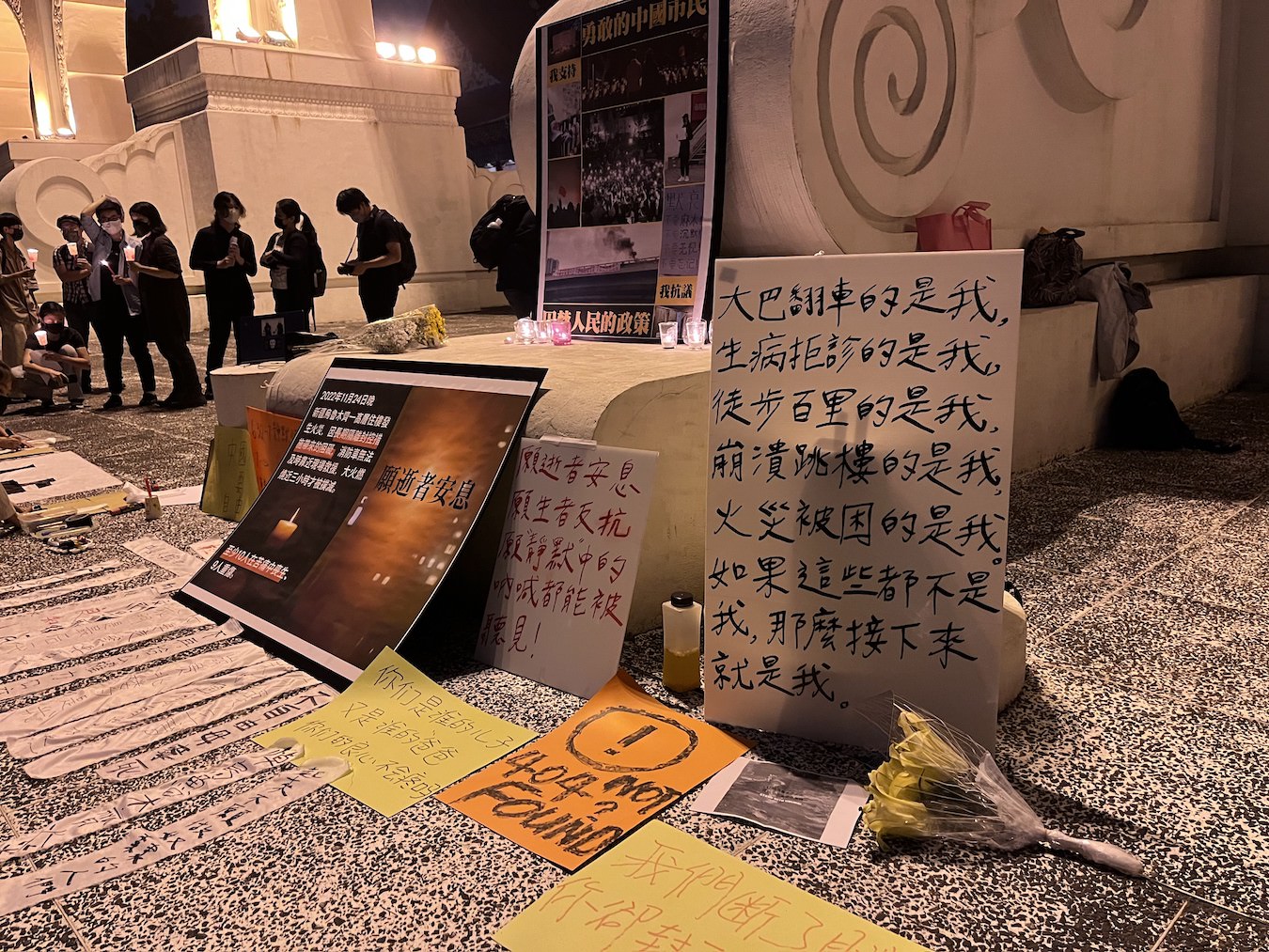 In past weeks, thousands of FoxConn workers in Zhengzhou have left factories and sought to return home by foot, due to outbreaks at the factory and the fact that they would be put in quarantine if they traveled by bus or public transportation. The more recent riots were directly caused by changes announced by authorities requiring new workers to work through the Lunar New Year holiday, requiring them to stay at their positions until March 2023 or lose bonuses.

More generally, the protests that have taken place in the past weeks are among the largest protests to take place in China in years. Nevertheless, given widespread censorship, it is difficult to know the full scale of protests, with much information spreading in the form of videos and clips that circulate online.

The vigil was announced with relatively short notice, circulated primarily through images, and took place one day after Taiwanese nine-in-one elections yesterday. Nevertheless, the vigil attracted around 80 to 100 participants. 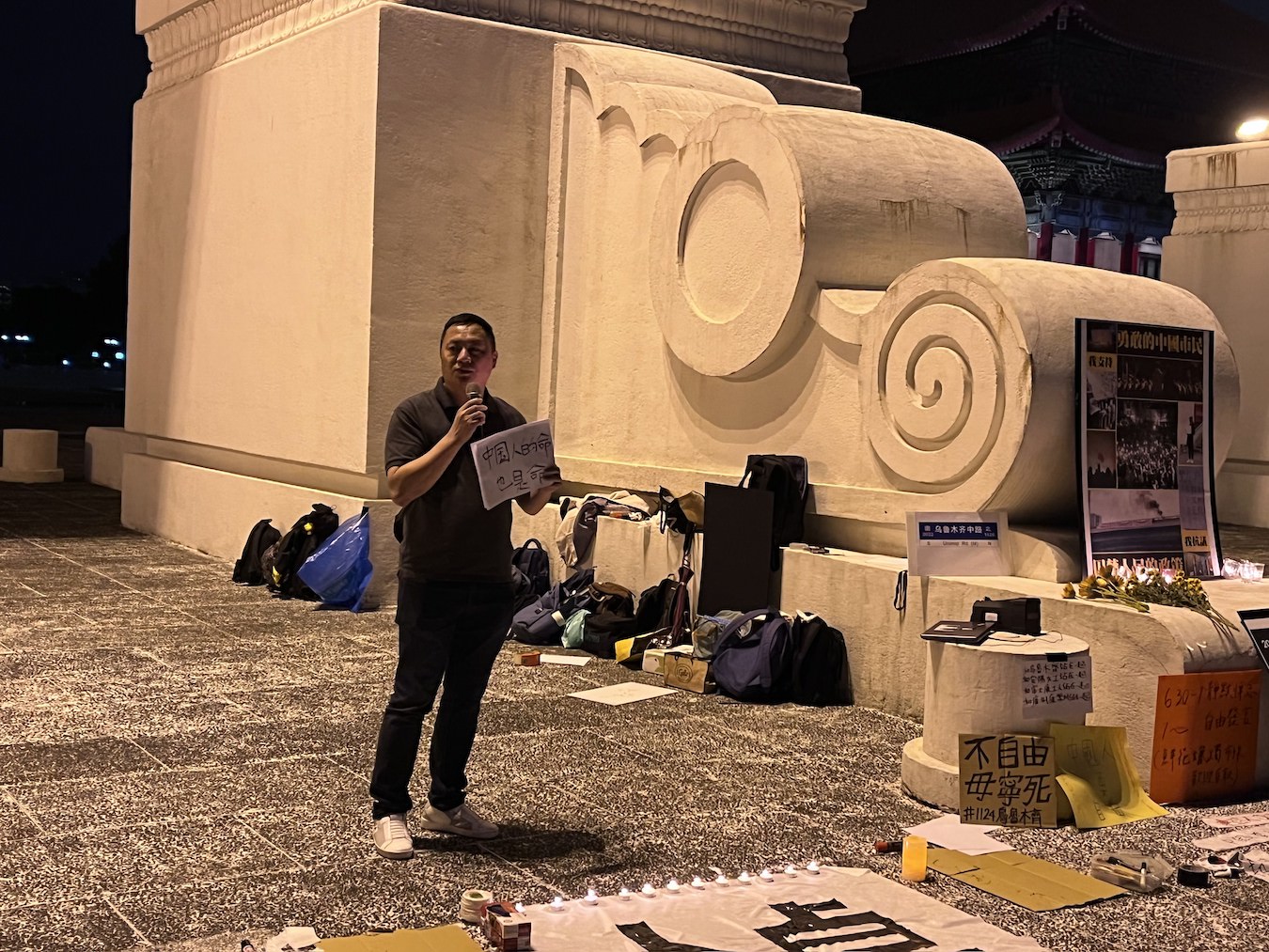 Participants lit candles, which they put in front of a memorial plaque that was set up for victims of the Urumqi fire. Participants were encouraged to write messages on paper or white cloth that was laid out in front of the plaque.

At 7:00 PM, the event’s moderators commented on the deaths in Urumqi in the wake of the worker riots in Zhengzhou, and not long after the Sitong Bridge protest that took place in Beijing shortly before the CCP’s 20th National Congress.

Two speakers were Tiananmen Square student leaders Wang Dan and Zhou Fengsuo. Both commented on the history of pro-democracy struggles in China, stating that it had been decades in China since there had been protests calling openly for democracy. Zhou stated that protests had spread to Szechuan and Chengdu and also took place among universities in Beijing, such as Tsinghua University. Likewise, Zhou commented on the Chinese government’s use of digital surveillance and monitoring, yet Chinese people used Instagram, Twitter, and Telegram to spread information, circumventing the Great Firewall of China, and with much information circulating among overseas students. 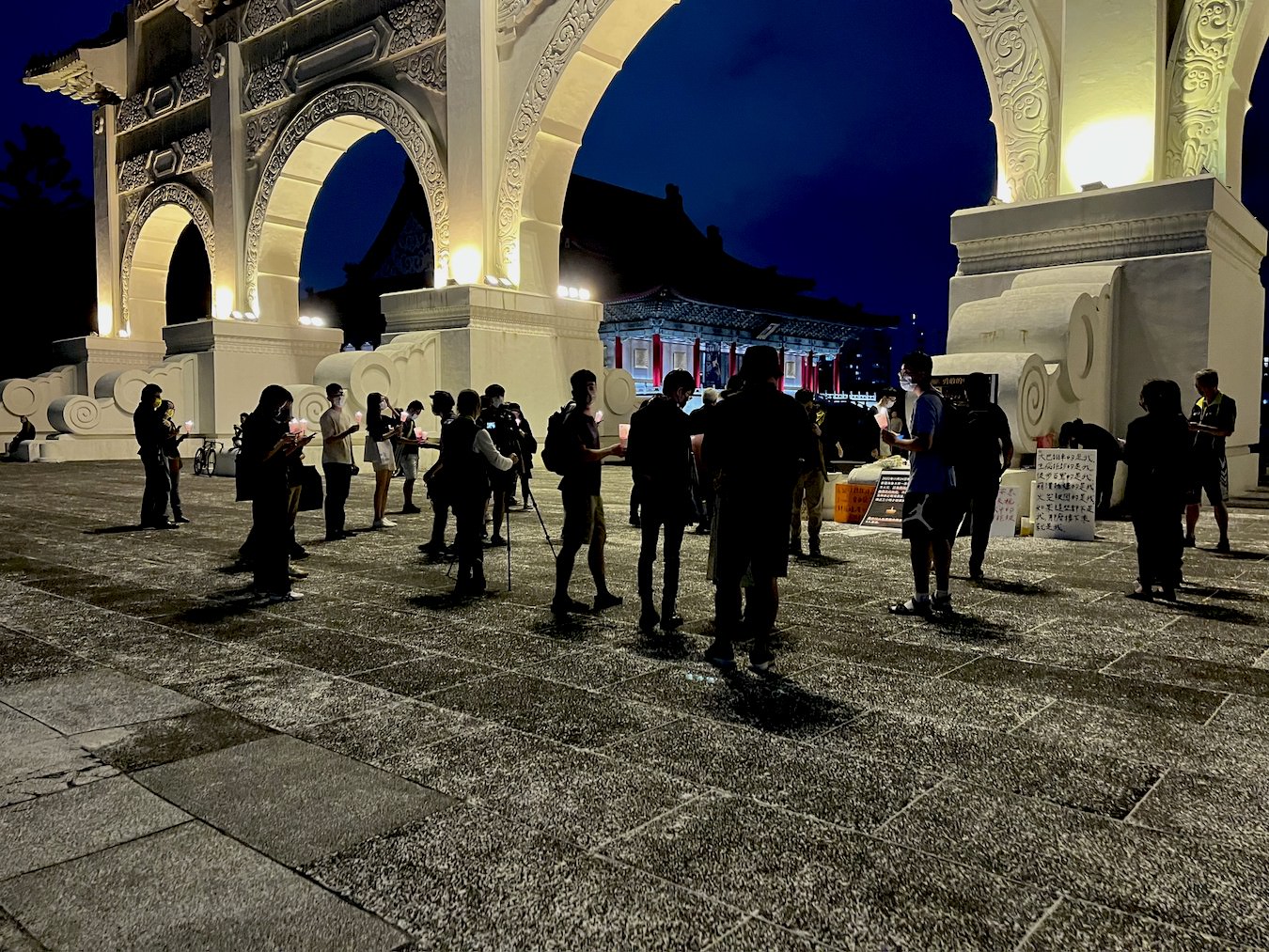 An open mic period was also held for the event. Some participants, who included Hongkongers, Chinese, and Taiwanese, took the opportunity to read political poems. One of the poems read was Bei Dao’s “The Answer”. Protest chants included calling for the destruction of the CCP and Taiwanese independence, and chanting the names of universities in China where protests had taken place. Songs sung by those assembled included “The Internationale” and “We Are the Last Generation.”

Other participants spoke about the struggle for democracy as a global struggle, particularly after the war in Ukraine. Some spoke of how the elections had proved a disappointment for Taiwanese, but stated that Taiwanese had long since become used to suffering setbacks in the struggle for democracy. The outcome of the elections yesterday, after all, was a win for the KMT, the pro-unification party in Taiwanese politics and the former authoritarian party. Several speakers spoke in English, including a Taiwanese American and several Americans. One speaker brought up labor conditions at FoxConn factories, while another speaker was a Japanese individual who had spent significant time in China.

It is to be seen whether further solidarity activities take place in Taipei or other cities in Taiwan for ongoing protests in China. Other solidarity demonstrations in recent memory include for Ukraine and Hong Kong. But that solidarity demonstrations for protests in China were spontaneously organized and could attract around 100 participants with less than 24 hours’ notice reflects the significance of the current protests.