Taoyuan Mayoral Debate Boils Down to Touting Past Accomplishments

THE TAOYUAN MAYORAL debate took place earlier this week. The debate pitted the four major candidates–legislator Cheng Yun-peng of the DPP, former DPP legislator Cheng Pao-ching, legislator Lai Hsiang-ling of the TPP, and Simon Chang of the KMT–against each other.

The Taoyuan mayoral race is one of the most contested in Taiwan, with the DPP hoping to hold onto Taoyuan after the successes of mayor Cheng Wen-tsan. The DPP’s original candidate Lin Chih-chien was forced to withdraw after a plagiarism scandal–something that significantly hurt the DPP’s chances–and was replaced by Cheng Yun-peng. But there is a strong possibility of a divided vote in both camps. Cheng Yun-peng is challenged by Cheng Pao-ching, who was expelled by the DPP for choosing to challenge the central party’s preferred candidate, while the pan-Blue vote may be divided between the KMT and TPP.

The debate consisted of three rounds, consisting of opening statements, a second round involving questioning by experts, and a third round for closing statements. 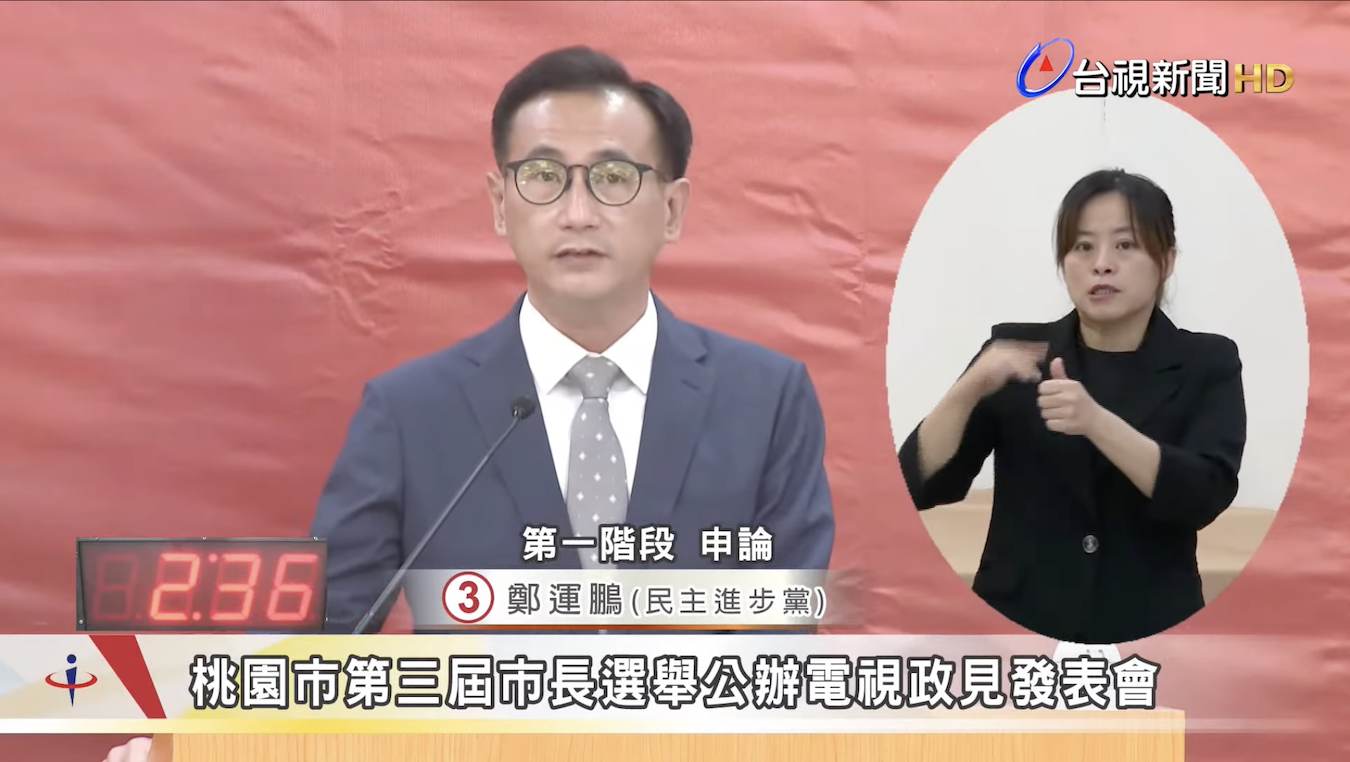 Cheng Yun-peng was first in the opening. Cheng primarily touted the accomplishments of his predecessor, Cheng Wen-tsan, who enjoyed high popularity during his tenure despite Taoyuan traditionally hewing to the pan-Blue camp. Cheng stated that he would develop the technology industry in Taoyuan, as well as ensure that power and water supply were adequate to attract industry. Cheng attacked Chang, his primary opponent, as having held high positions in government including as premier but failing to develop infrastructure as the Taoyuan Aerotropolis. Likewise, Cheng criticized Chang as linked to pro-unification groups.

On the other hand, Cheng Pao-ching emphasized policies for social housing, stating that he would loosen housing restrictions to generate more income to assist young people to purchase homes. Cheng claimed that this would improve Taiwan’s birth rate, particularly in light of the fact that many young people had moved to Taoyuan because of rising costs. Moreover, Cheng stated that he would distribute red envelopes to the elderly, while allowing for more free meals to assist the underprivileged.

Third to speak was Lai Hsiang-ling of the TPP. Lai criticized Cheng as coasting off of the reputation of his predecessor without offering concrete policies of his own. Lai touted herself as a TPP candidate, who was not from the DPP or KMT, and was someone new to Taoyuan and free of ties to vested interests. Given her background as a Taipei Department of Labor official and labor activist, Lai stated that she would implement policies that benefited workers. Lai asserted that she would emphasize transportation links with greater Taipei and Keelung.

Last in the opening round was Simon Chang of the KMT. Chang emphasized his past career working for Google and as the premier. Chang stated that he would improve infrastructure in Taoyuan, due to concerns about the safety of cheaply built public infrastructure, and improving transportation to avoid traffic issues. Chang touted his background in engineering with regard to this. Otherwise, Chang argued that he would build infrastructure for families with children. 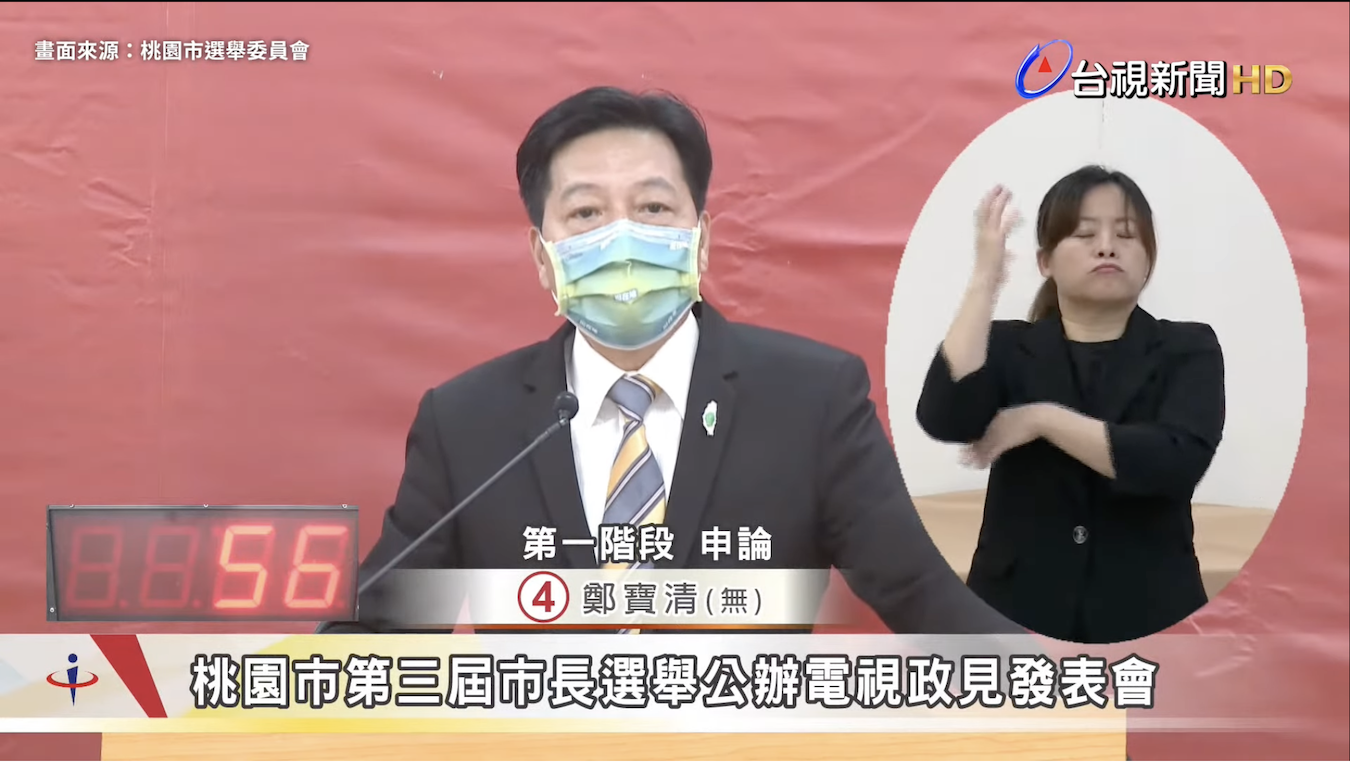 During the second round of the debate, candidates were asked about social housing and what policies they would implement to assist the elderly. In effect, these were questions about Taiwan’s declining birthrate, elderly population, and lacking economic opportunities facing young people who lack the resources needed to purchase homes.

Similarly to his opening comments, Cheng Yun-peng emphasized the accomplishments of the central government regarding social housing, though also stressing how Taoyuan social housing policies differed from those of Taipei. Cheng also emphasized social housing for new migrants to Taiwan. Cheng stated that the past administration’s accomplishments when it came to care for the elderly could be seen in Taoyuan having a comparatively low number of severe COVID-19 cases. He stated that he would prioritize community centers for the elderly, as well as that infrastructure such as toilets would be improved to make it easier for them.

Cheng Pao-ching also took the tack of emphasizing past accomplishments, but claimed that these were his own, proposed when he was legislator in Taoyuan. Moreover, Cheng accused the central government of having enough for social housing. Cheng brought up temples and how temples could be implemented into care for the elderly and providing transportation subsidies for the elderly, and later veered off into attacking Simon Chang with accusations of links to the KMT’s “black gold” corruption.

Lai Hsiang-ling attacked Tsai regarding her social housing policies, while claiming that in the legislature, she had tried to provide oversight over the DPP’s social housing policies. Lai stated tax policies she planned to implement would avoid empty properties not being used for housing but simply as a form of investment, claiming she could carry out such policies due to not having clientelist links. Lai further criticized Cheng Wen-tsan as not doing enough for the elderly, saying that she would make taxi transportation easier for the elderly, and that during COVID-19, the elderly had difficulty accessing information about measures against the pandemic. 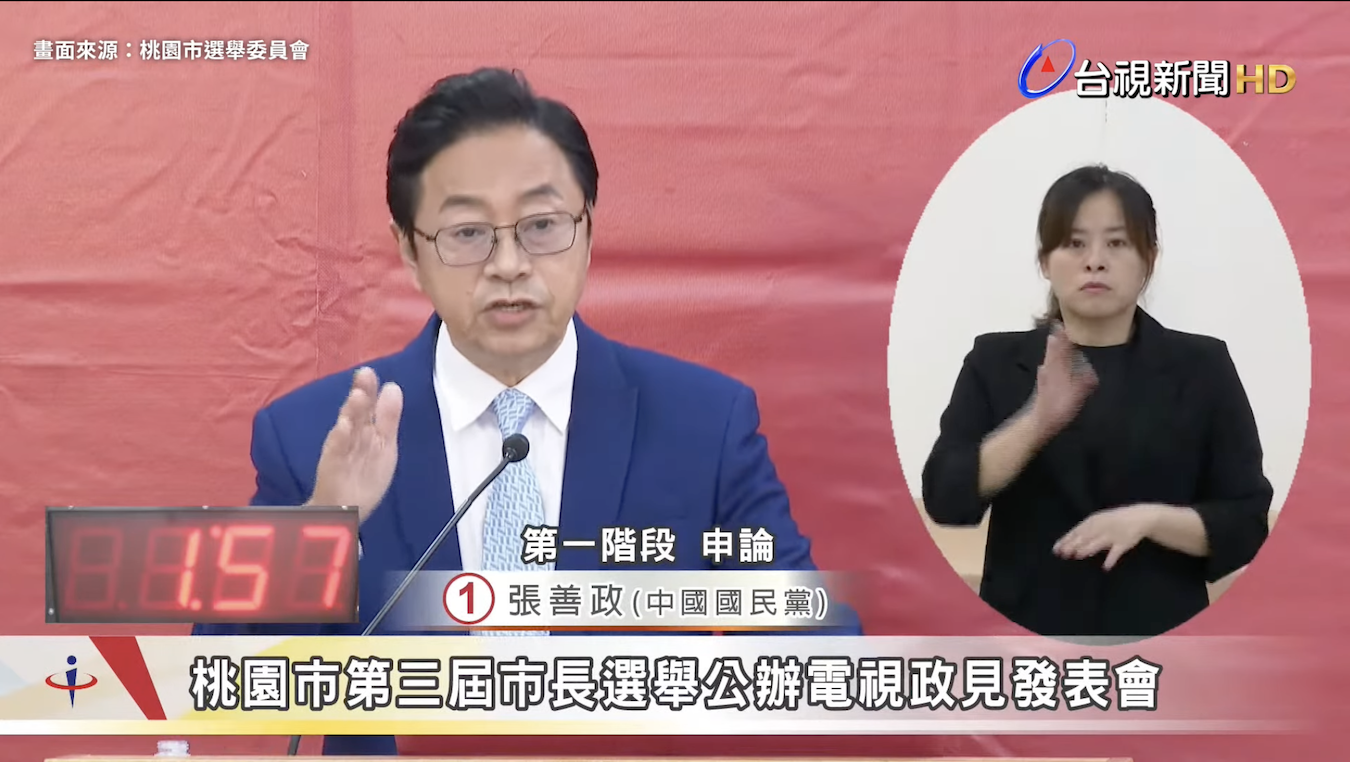 In the closing round of comments, Cheng Yun-peng emphasized that he would expand the links between the MRT and the MRT systems of other systems. Addressing minority groups, Cheng said he would roll out policies favorable to Hakka and Indigenous, build medical facilities for children, and seek to attract high-tech industries to Taoyuan.

Cheng Pao-ching’s closing focused on attacking the DPP. Cheng touted his history in the dangwai movement but accused the DPP of having itself become dictatorial. Cheng claimed that this was why he had decided to challenge Cheng and run as an independent, even if that meant his being expelled from the DPP.

Like Cheng, Lai Hsiang-lin touted herself as an independent, stating that she was free of ties to local corruption. Lai claimed that Taoyuan would have a more effective government if it could break free from being caught between the two parties of the DPP and KMT, as well as that she would push for effective, transparent government as mayor. Lai closed by criticizing Cheng Wen-stan and Cheng Yun-peng for failing to fix infrastructure safety issues in Taoyuan and bringing up her Hakka heritage. 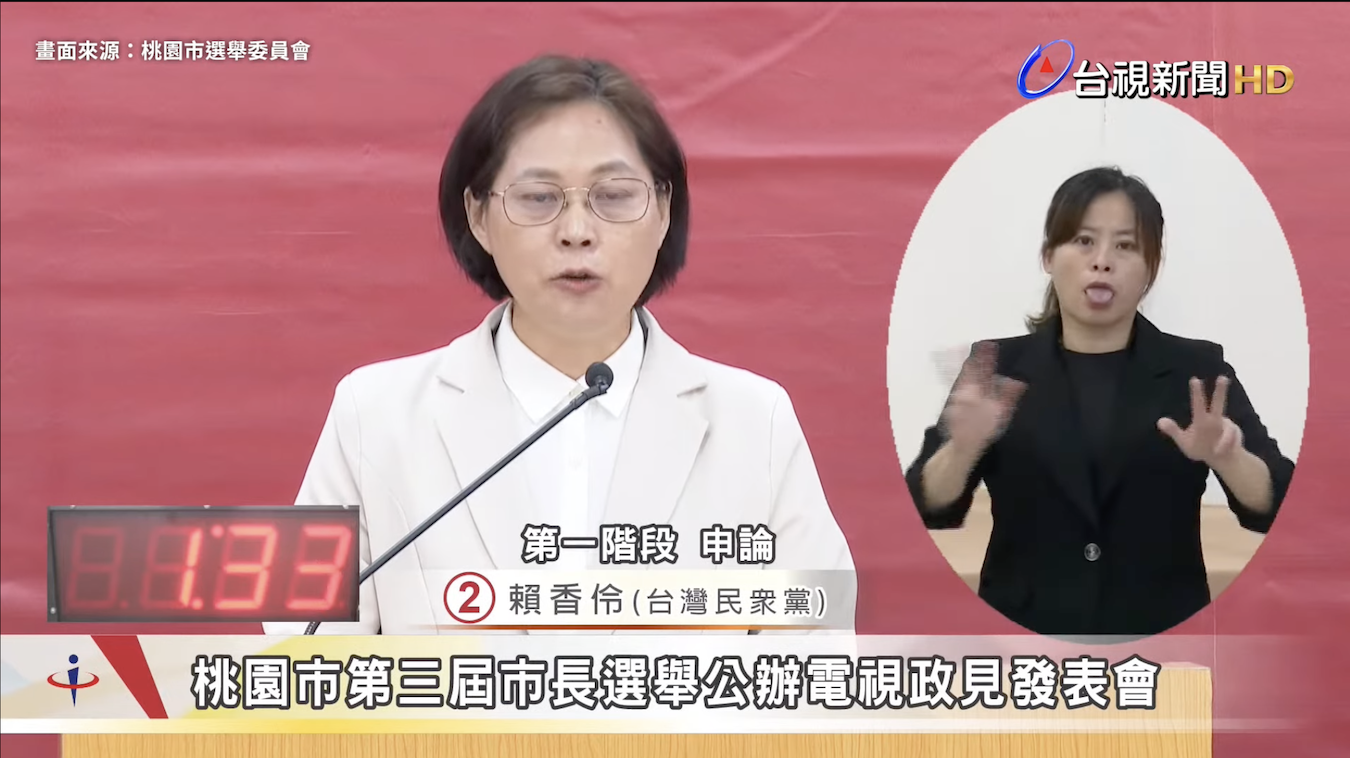 Lastly, Simon Chang tried to drive home the points he previously raised about assisting the elderly and strengthening transportation links, also stating that he would speed up urban renewal. Chang claimed his expertise in the technology industry could allow TSMC and other high-tech industries to decide to set up facilities in Taoyuan. Chang touted the accomplishments of previous KMT mayors of Taoyuan and argued that he would do the same.

The debate shows that the same issues were focused on by all candidates, such as issues regarding Taoyuan’s elderly policy, of how to attract high-tech industries, or to provide more affordable housing for young people. At the same time, candidates primarily tried to argue for themselves in connection to the past records of predecessors, or attack each other on that basis. In that sense, as with the Taipei mayoral debate, the election may ultimately come down to party identification more than anything, rather than any substantive difference in policy.