KING MSWATI III visited Taiwan last month as part of the first visit to Taiwan by the monarch of Eswatini since the start of the COVID-19 pandemic. Mswati III was a frequent visitor to Taiwan in the past, visiting on 17 other occasions. Mswati’s son also goes to college in Taiwan. His last visit to Taiwan was in June 2018.

Mswati III met Taiwanese political leaders such as President Tsai Ing-wen, Minister of Foreign Affairs Joseph Wu, and others, with a banquet held in his honor. Likewise, Mswati III met with the Ministry of Economic Affairs and held a lecture aimed at attracting Taiwanese investment to Eswatini.

Likewise, in a similar vein, Mswati III met with representatives of CPC Corporation, Taiwan’s state-run petroleum, oil, and natural gas company, which is operated by the Ministry of Economic Affairs. Mswati III also met with students from Eswatini currently studying in Taiwan.

Unfortunately, Mswati III and his regime in Eswatini prove one of the authoritarian regimes backed by the Taiwanese government in return for diplomatic recognition. This is more generally the pattern among many of Taiwan’s remaining allies, who are all smaller than Taiwan in terms of their population and the size of their economy. In 2018, Taiwan’s economy was three times larger than that of all of its diplomatic allies combined, and this is no different with Eswatini, which has a population of 1.5 million compared to Taiwan’s 23 million.

As a number of its remaining diplomatic allies are run by authoritarian political leaderships, Taiwan has long been accused of “dollar diplomacy”, in backing them in return for recognition–even as Taiwan’s own rhetoric is that these are fellow democracies with whom it shares common values. Although this is a practice that goes back to KMT authoritarian times, the DPP has not substantively broken from the practice. 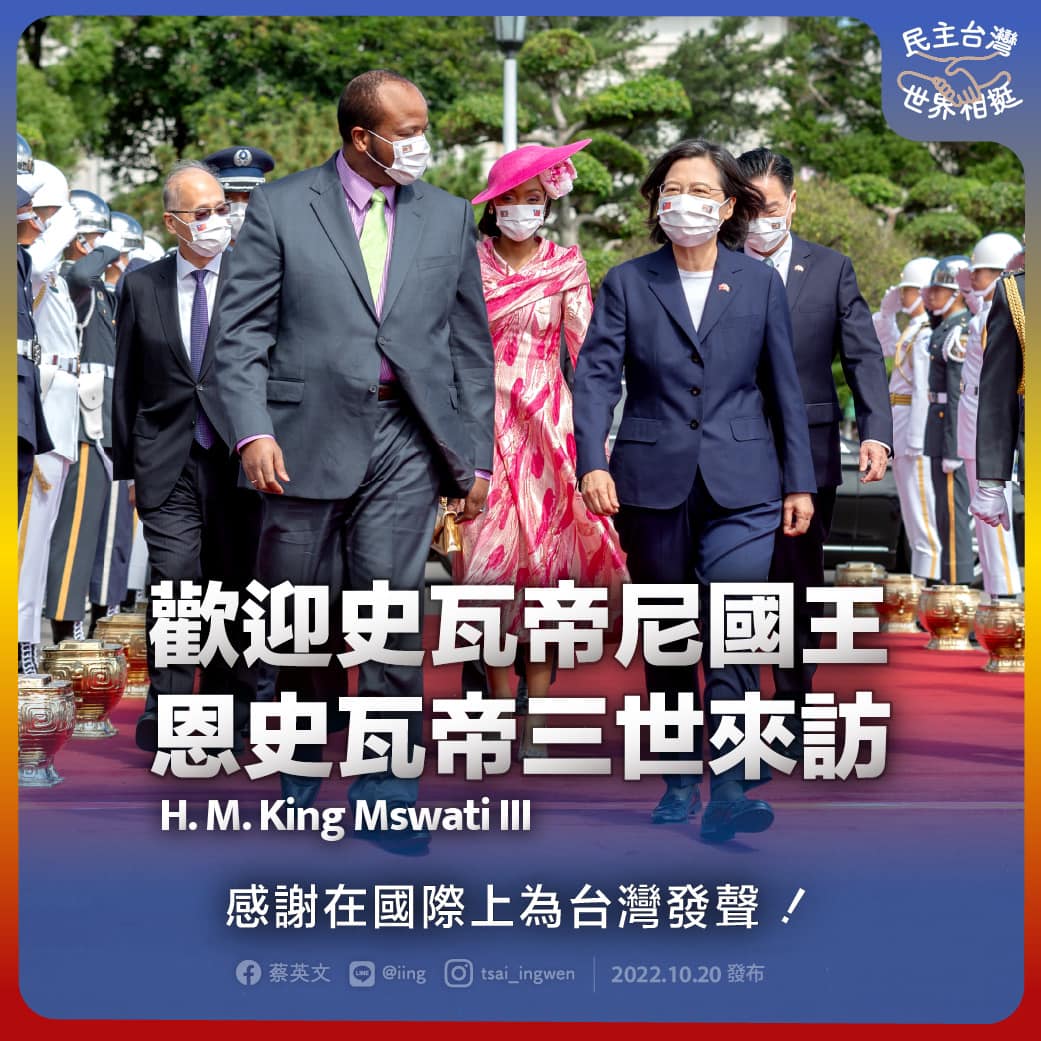 Eswatini is a particularly egregious example. Mswati III is one of the world’s last remaining absolute monarchies. Under his rule, Eswatini is impoverished and has one of the world’s lowest life expectancies. Life expectancy has halved since 2000 due to high rates of HIV. In 2011, Mswati III called for sterilizing and branding individuals with HIV. Perhaps pertaining to his discussions with CPC, Mswati III and his family are accused of significant graft, such as skimming 25% of deals made by the state through mining deals or other trade agreements.

Political parties were banned in 1973 and the constitution voided, as a result of which Eswatini does not hold free and fair elections. Mswati III had agreed to constitutional changes in the past and there had been protests in the past, such as saw strikes by civil servants critical of the monarchy’s exorbitant spending in 2019, that pushed against his power. But protests in summer 2021 calling for democratic elections were put down by state security forces, with dozens killed.

Politicians that supported the protests, such as parliamentarians Mduduzi Bacede Mabuza and Mthandeni Dube, have now been imprisoned for over a year and denied legal representation, while others, such as Hon Gaw’zela, have been forced into exile. There have been no answers or accountability regarding the killings.

The pro-democracy protests in Eswatini prove reminiscent of Taiwan’s past in that Taiwan also once had authoritarian rulers in the form of the Chiang family and KMT, who were also highly corrupt. It required protest and significant sacrifice to achieve democracy in Taiwan. But despite this, the Tsai administration has continued to back the Mswati regime, donating 637 million NT after the protests for reconstruction efforts–some of which is likely to have been skimmed off by Mswati III and his family. On other occasions, the Taiwanese government had provided medical treatment for Mswati III.

Nevertheless, such actions on the part of the Tsai administration do not surprise. In 2018, the Tsai administration recognized the election victory of Juan Orlando Hernandez in what international observers called a stolen election. In 2021, Taiwanese diplomatic accounts on Twitter expressed support for the Colombian government after police violence against demonstrators protesting against tax reforms. So, too, then with Mswati III’s dictatorial rule in Eswatini–even if through withdrawing support, Taiwan is in a position to apply pressure for political changes to take place.