TAIWAN LGBT PRIDE 2022, the annual pride parade held in Taipei at the end of October on the same weekend as Halloween, took place today. It is estimated that 120,000 attended, despite intermittent rain during the course of the parade. This year was the 20th anniversary of the event. 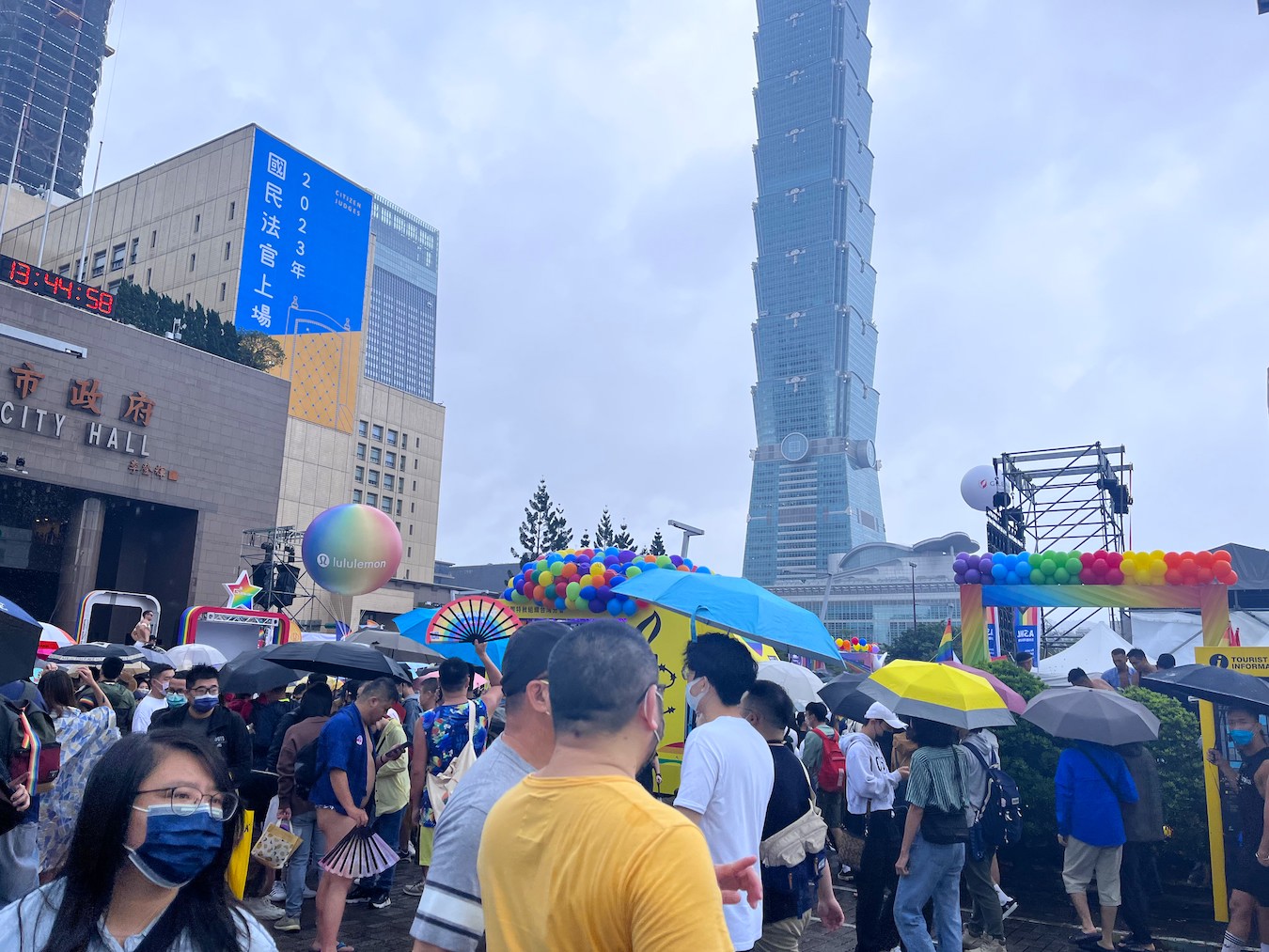 Participants first gathered at Taipei City Hall Plaza, where stages and stalls were set up. Subsequently, heading out for the march at around 2:30 PM after a performance by indie rock band Pisco, participants headed west along Ren’ai Road before splitting into two groups. One group continued west until the Ren’ai Dunnan Traffic Circle, headed north to Zhongxiao East Road, before reaching Yixian Road and turning south again to return to Taipei City Hall Plaza. The other group turned south to head down Guangfu South Road, west on Xinyi Road, and north on Dunhua South Road, before moving east on Ren’ai Road to return to Taipei City Hall Plaza. Sometimes contingents passed by each other headed in opposite directions.

The last full-scale pride parades to take place in Taiwan were in 2020, with the last iteration of Taiwan LGBT Pride held in 2020. Due to the effects of COVID-19, Taiwan LGBT Pride was held as a scaled-down online, hybrid event in 2021, with events held in smaller venues, or stage and market booths set up across Taipei, and no physical march. 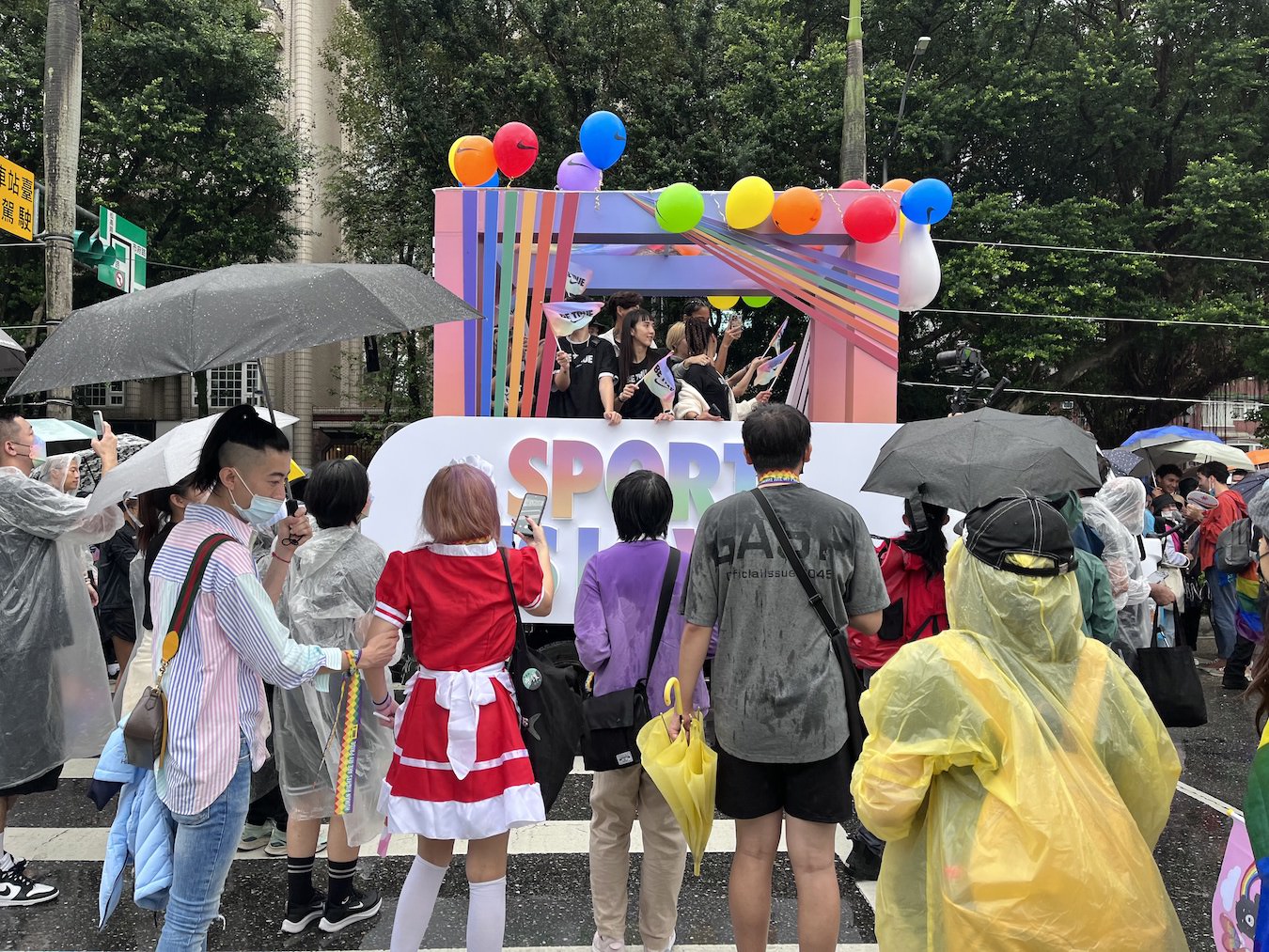 Taiwan LGBT Pride saw 130,000 in attendance in 2020, as a result of which today’s march was a return to form. As borders were opened earlier this month to visitors, this allowed for some visitors from abroad, with there usually being a significant number of visitors to Taiwan for pride. Taiwan usually sees visitors from Japan, Thailand, and other Asian countries, and this took place this year, though that borders were only opened several weeks beforehand probably contributed to fewer visitors than in other years.

Many of the groups that attended work on gender and sexuality issues, ranging from the Taiwan Lourdes Association, which provides assistance to people living with HIV and AIDS, to Taiwan Sex Industry and Worker’s Rights Advocacy, which advocates for sex workers. Civil society organizations from Amnesty International, which had its own float, and the Green Citizen Action Alliance were present, as were third parties such as the TSP, NPP, and TPP, though notably TPP party leader Ko Wen-je has stated that he is opposed to gay marriage in the past. Contingents included BDSM-related groups, parents’ organizations, and etc. 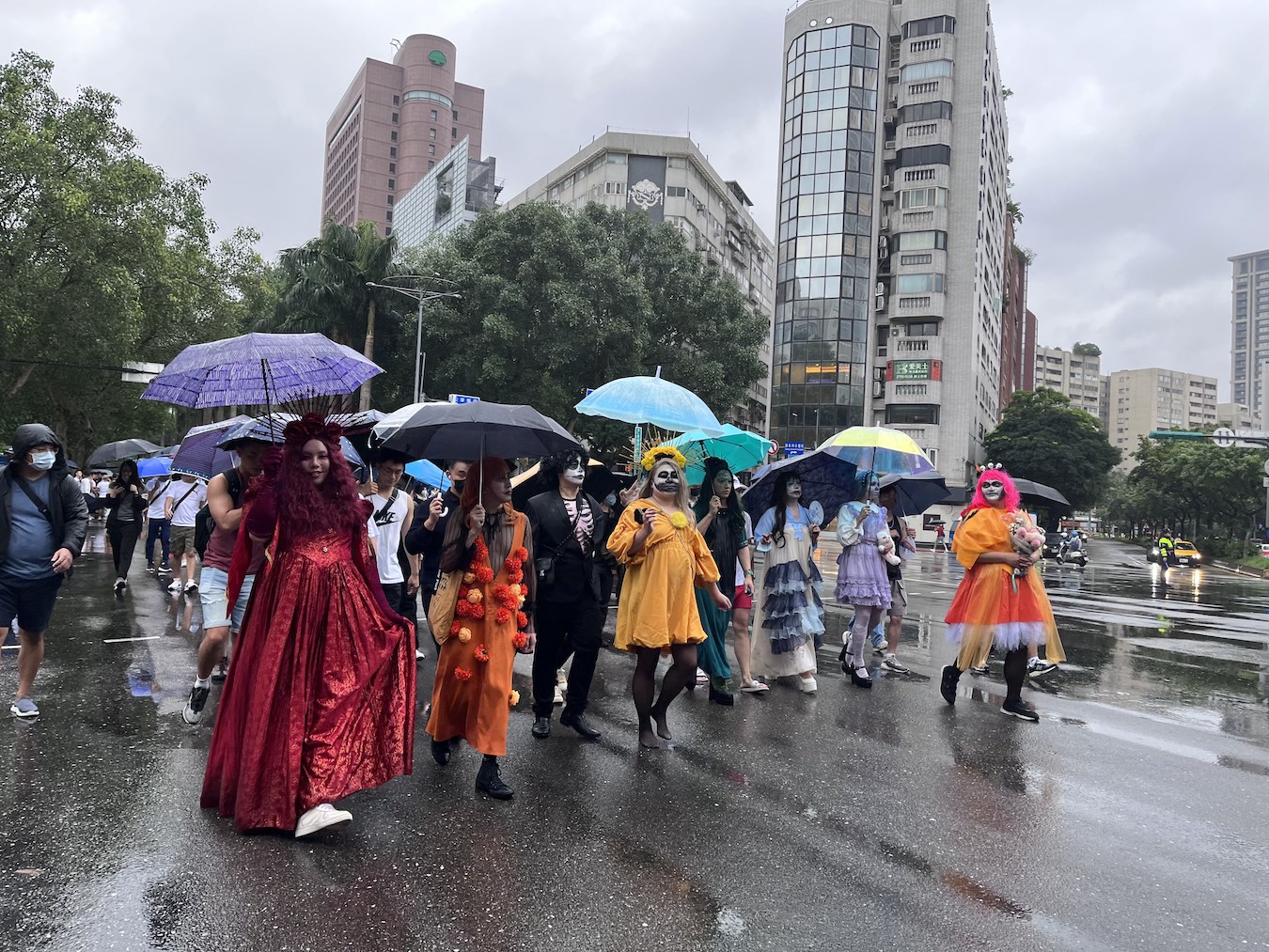 In past years, the number of corporate floats has grown in number, which was the case this year, as well. Corporate participants ranged from vaccine manufacturer AstraZeneca to Uber, while local LGBTQ businesses such as G-Star or Fairy were also present. In comments on the pride parade’s main stage, organizers justified this as allowing for greater resources to hold an event. Representative offices in Taiwan, such as the American Institute in Taiwan, the Canadian representative office, and the British representative office had delegations at the parade.

Speakers at the pride parade brought up many issues. Many of the issues raised by the 2022 pride parade carry over to past years as well. This includes, for example, the call to lift limits on transnational gay marriages that do not allow Taiwanese to marry individuals from countries that have not legalized gay marriage, or people from countries that have not legalized gay marriage to marry in Taiwan. These restrictions on transnational gay marriages have persisted since the legalization of gay marriage in Taiwan in May 2019. 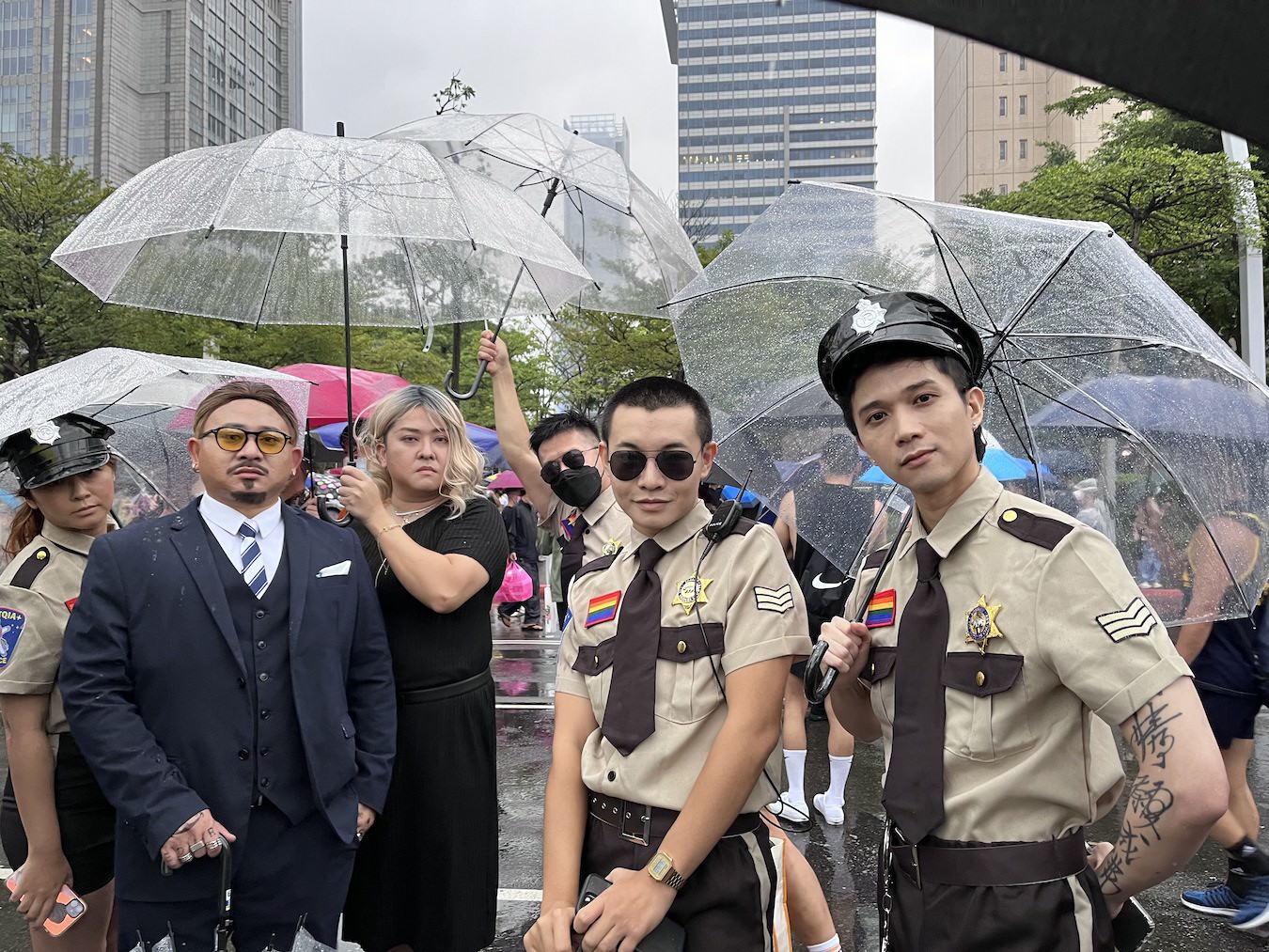 Likewise, speakers called for many of the same demands of the Trans March yesterday, such as the lifting of surgery requirements for changing one’s legal gender. Yesterday’s Trans March, which featured many of the same groups and speakers, was attended by 3,000. This was the highest-ever attendance for the Trans March, which similarly took place after a year in which no physical march could be held due to the effects of COVID-19.

To this extent, speakers referred to the defense of abortion rights in Taiwan, citing the repeal of the constitutional right to abortion in the US in a June 2022 Supreme Court decision. This perhaps points to what extent discourse in the US regarding gender and sexuality affects discourse in the US as, too, was the case regarding the Obergefell v. Hodges ruling that legalized same-sex marriages in the US and Taiwan’s subsequent legalization of gay marriage. With US conservatives now hoping to repeal the Obergefell v. Hodges ruling in the wake of their successes rolling back abortion rights, it is possible that this may embolden conservatives in Taiwan, as previously seen in the pushback against the legalization of gay marriage in Taiwan by Christian groups with strong organizational links to Christian fundamentalists in the US. 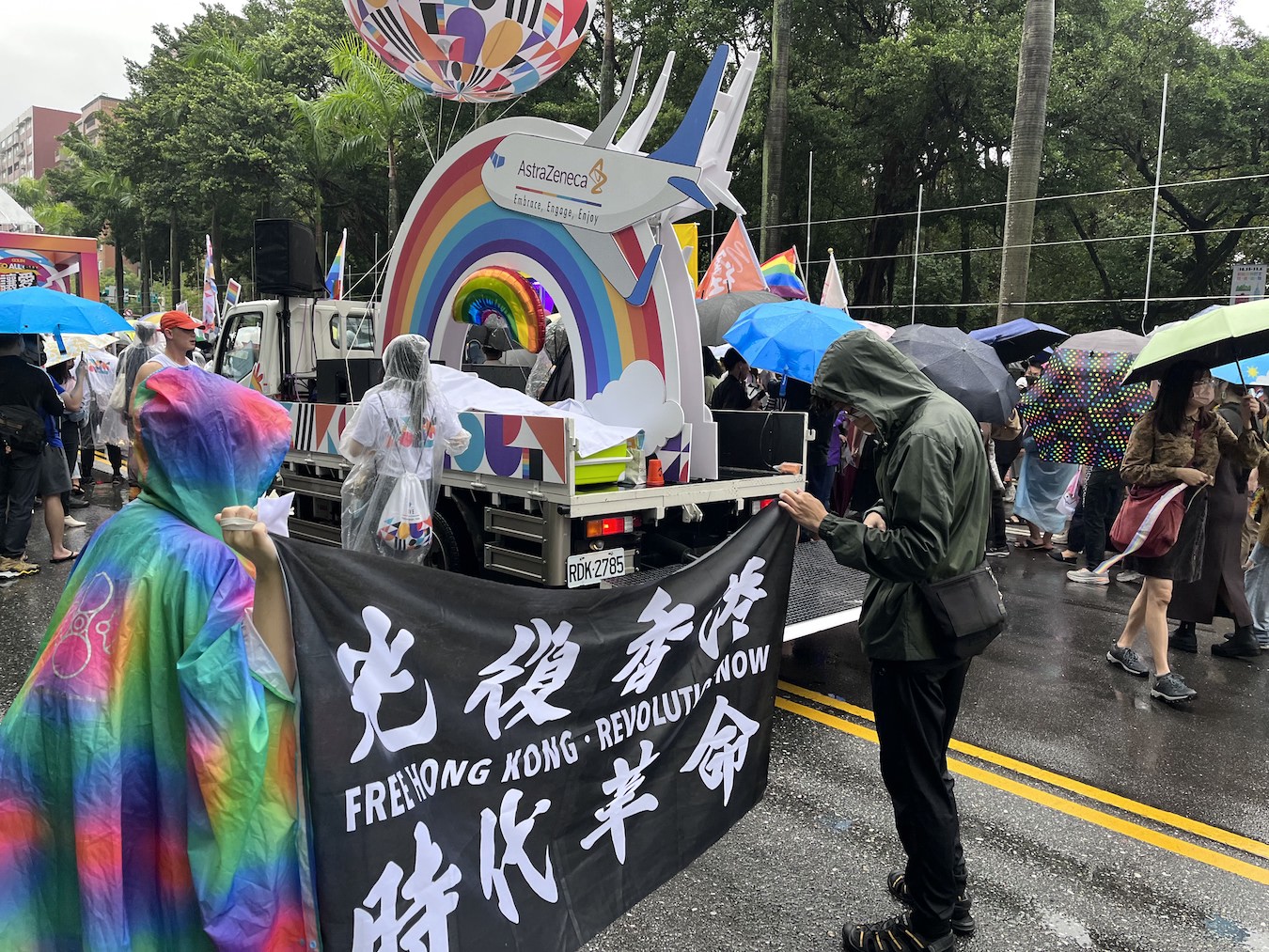