Trigger warning: This article contains a brief section recounting the online mobilization of trans-exclusionary radical feminists in Taiwan since last fall that some readers might find distressing. This section will be marked off with a line of asterisks, such as follows.

OVER 3,000 people gathered in Ximending this evening to participate in the fourth annual Taiwan Trans March organized by the Taiwan Tongzhi (LGBTQ+) Hotline Association. This year’s march is the first in-person Trans March since the historic gains in Taiwan’s trans rights movement last fall. At the same time, trans-exclusionary radical feminists (TERFs) have also mobilized, almost exclusively online, against the trans rights movement in Taiwan. As trans issues continue to enter into public discourse and legal reform proceeds at its own pace, visibility and support for Taiwan’s trans community has never been more crucial. 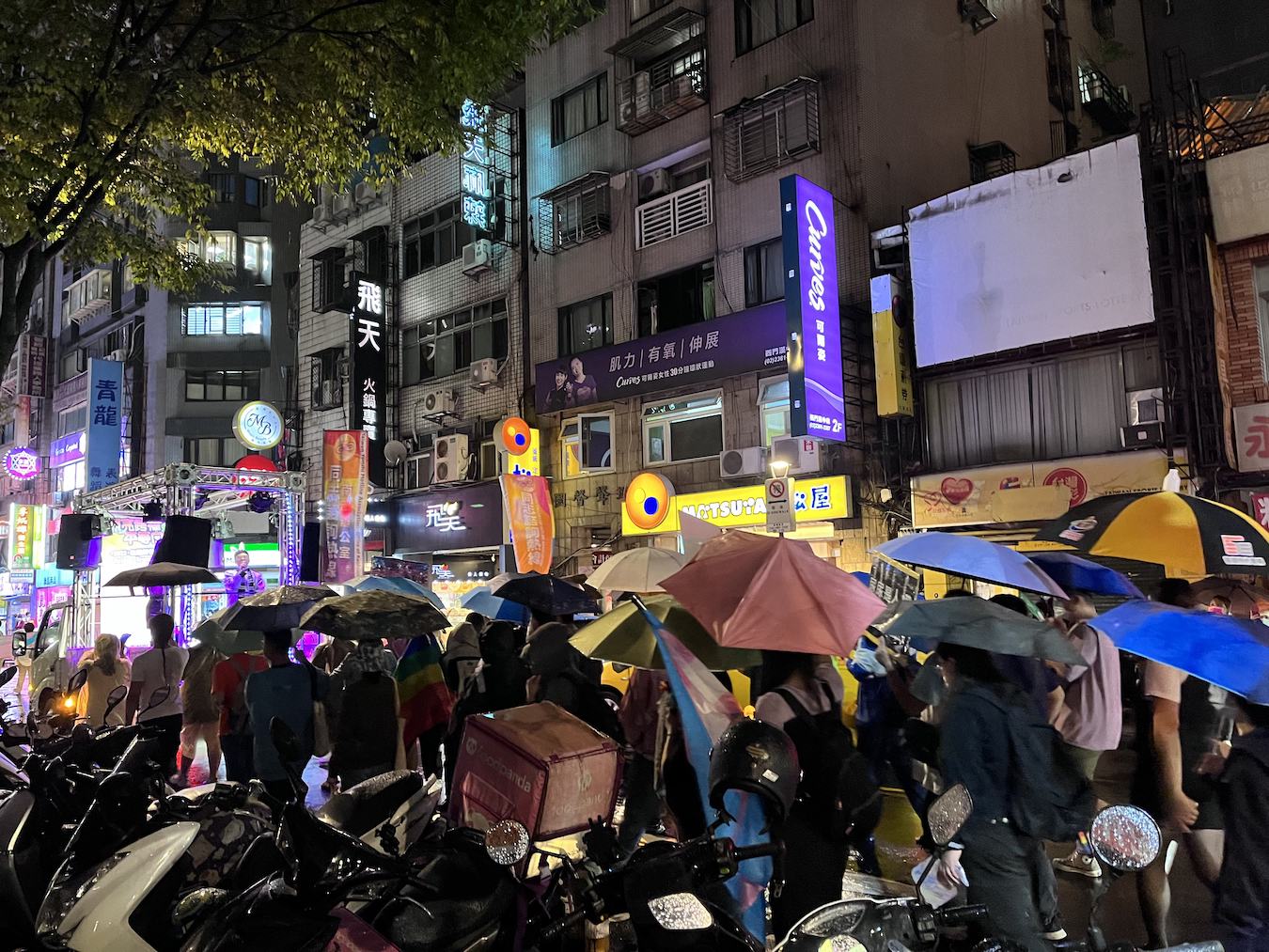 ON SEPTEMBER 23RD of last year, the Taipei High Administrative Court made a historic decision in favor of the Taiwan Alliance to Promote Civil Partnership Rights’ (TAPCPR) transgender plaintiff Xiao E to allow her to change her legal gender without providing proof of surgery, which she later did on November 18th. Two days prior, Lisbeth Wu, another TAPCPR transgender plaintiff whose case is aimed at striking down the proof of surgery requirement for changing one’s legal gender, and the Taipei High Administrative Court agreed to halt Wu’s administrative appeal and apply for a constitutional interpretation by the Constitutional Court of the Judicial Yuan.

Wu’s case may result in the Constitutional Court ruling that the current Ministry of Interior executive order (內政部97年11月3日內授中戶字第0970066240號令) requiring proof of surgery for changing one’s legal gender is unconstitutional. This would effectively end the proof of surgery requirement for all people seeking to change their legal gender in Taiwan, not just the successful plaintiffs of administrative appeal cases such as Xiao E.

In response to Xiao E’s legal victory and the tables set for potentially abolishing the proof of surgery requirement with Lisbeth Wu’s case, a group of mostly anonymous trans-exclusionary feminists have mobilized online to protest the spread of “gender ideology” and “gender self-identification” in Taiwan. This group has created a website called No Self ID Taiwan (NSIDT) to gather together a “gender critical” opposition to Taiwan’s transgender rights movement, distributed fearmongering flyers proclaiming that “the first woman with a penis has appeared in Taiwan” (in reference to Xiao E) and will invade single-gender spaces such as restrooms designated for woman, and have organized multiple anti-trans petitions. In an exclusive interview with the gender critical feminist publication 4W, a pseudonymized NSIDT member explained: “We would like to let more people know how Western trans ideology has invaded the countries in Asia [such as Taiwan] and corroded our women’s rights.” This same NSIDT member went on to describe “trans ideology as the extension of rape culture” since “women’s wills are ignored and forced to satisfy men’s uncontrolled desires to be seen as women.”

Public discourse remains tense around abolishing the surgery requirement for updating one’s legal gender. Whether or not Lisbeth Wu’s case will even be heard is still in the process of being considered by the Constitutional Court. It is generally believed that the Constitutional Court will hear Wu’s case, thus moving legal reform along; however, it is unclear when the Court will make its decision, with some trans activists speculating that the Court is in no rush to hear Wu’s case and hence this process could take years. In the meantime, visibility raising and public engagement remain crucial steps for paving the way for a more trans-inclusive Taiwanese society.

THIS YEAR’S THEME is “Turn on the Lights, March for Trans Rights.” As Hotline explains in their press release, this year’s theme draws attention to the low visibility and social isolation that trans people in Taiwan may face in their everyday lives as they navigate public spaces and facilities, the workplace, and healthcare, prompting a “society [that] still lacks understandings of transgender-related issues” to learn more about and come into solidarity with the trans community. A total of about 2,000 participants marched in Hotline’s first annual Taiwan Trans March in 2019. In 2020, Hotline hosted the second annual Trans March and specifically urged the gay, lesbian, and bisexual communities to march in support of the trans community. Approximately 1,500 participants marched in 2020, and in 2021 due to the pandemic, the third annual Taiwan Trans March was held as a live broadcast event and attracted over 3,000 viewers. This year saw over 3,000 participants, making this the biggest in-person Trans March to date. 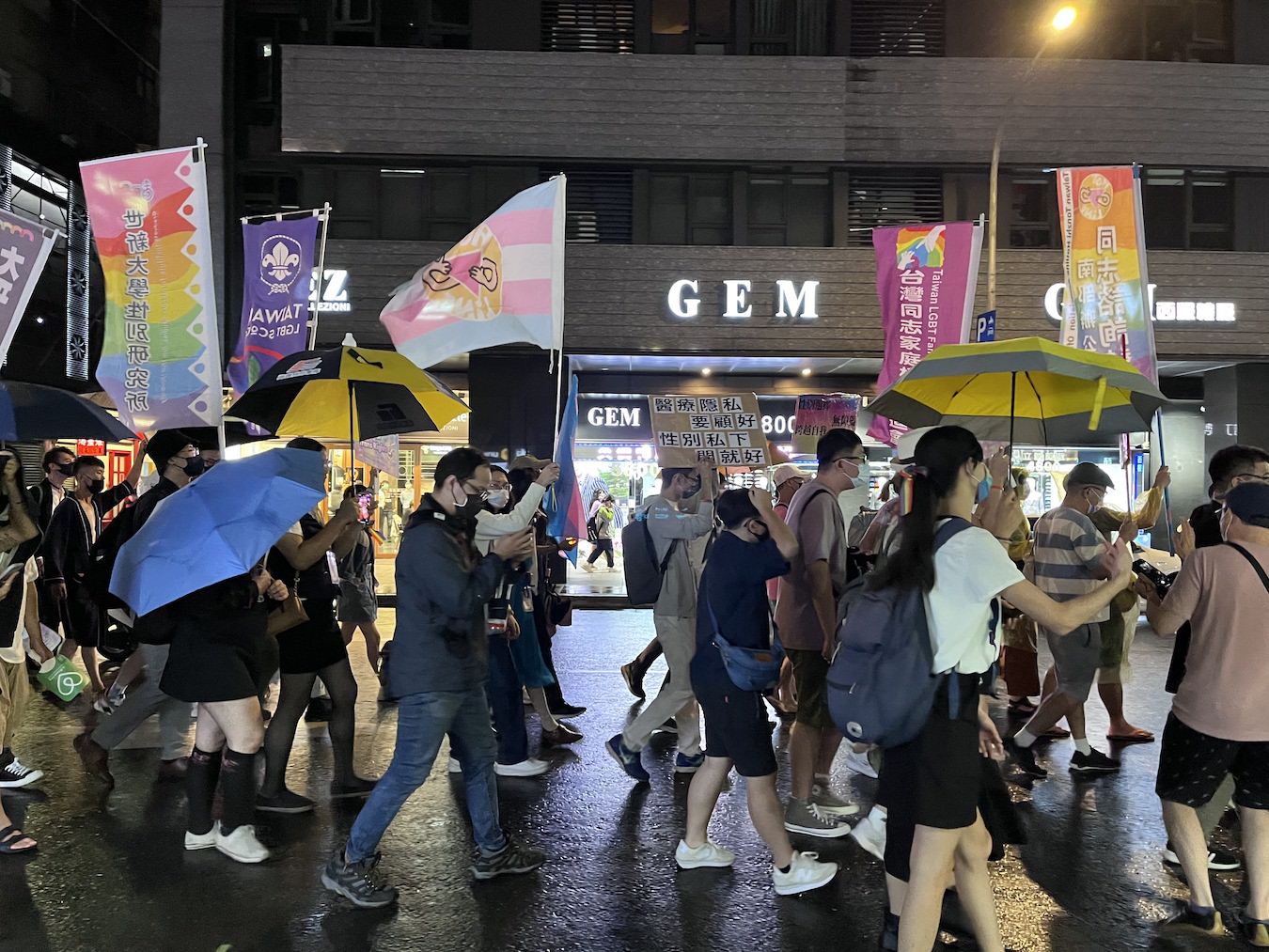 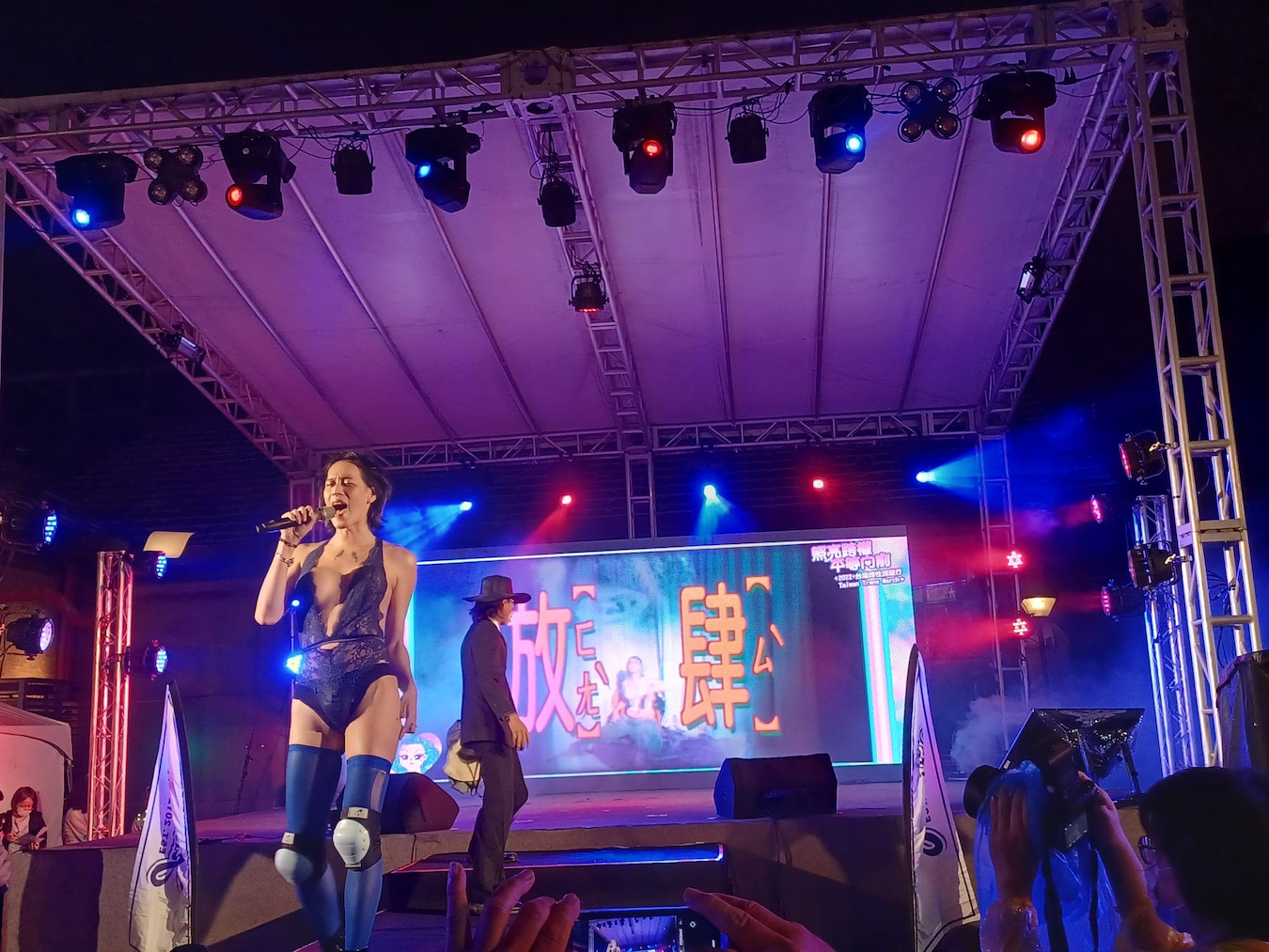 Transgender activist suan 6 opened Trans March activities by performing her new single 《放肆》.Following suan 6’s performance, Hotline members gave opening remarks explaining that the trans community is still struggling with access to gender-friendly spaces and facilities such as bathroom access, as well as facing workplace discrimination. Hotline announced that, similar to the 2020 Transgender Human Rights Survey, that they will be launching a 2022 Transgender Life Difficulties Survey later this year. 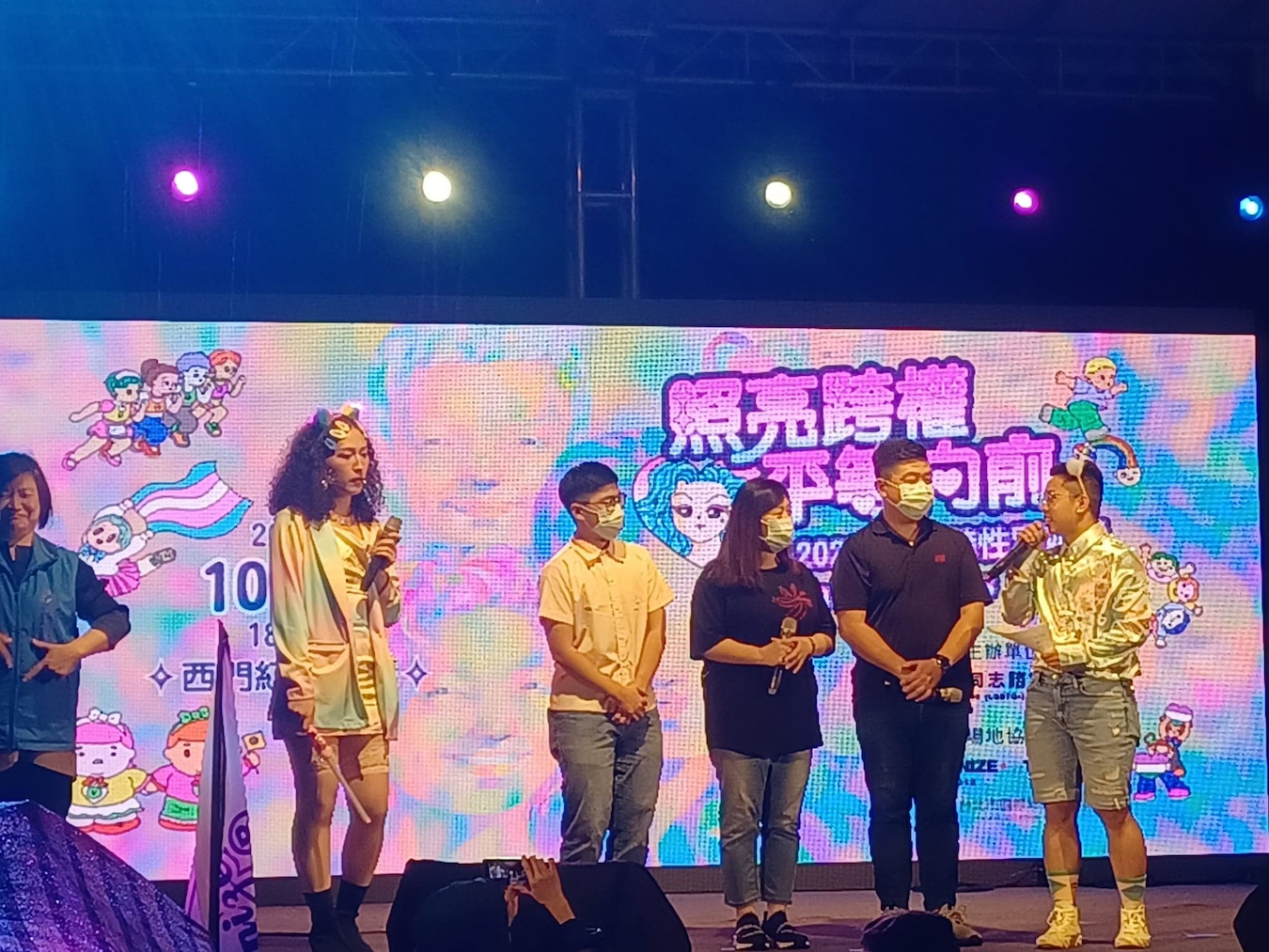 Prior to embarking, multiple volunteers gave statements, including a trans woman who shared that she has is not undergoing hormone replacement therapy and surgery because she desires to have children. Transgender podcaster and Hotline volunteer Deven also appeared on stage with his parents. Deven’s mother gave a brief word of encouragement to trans youth: “Trans children, don’t be scared, bravely be yourself.” 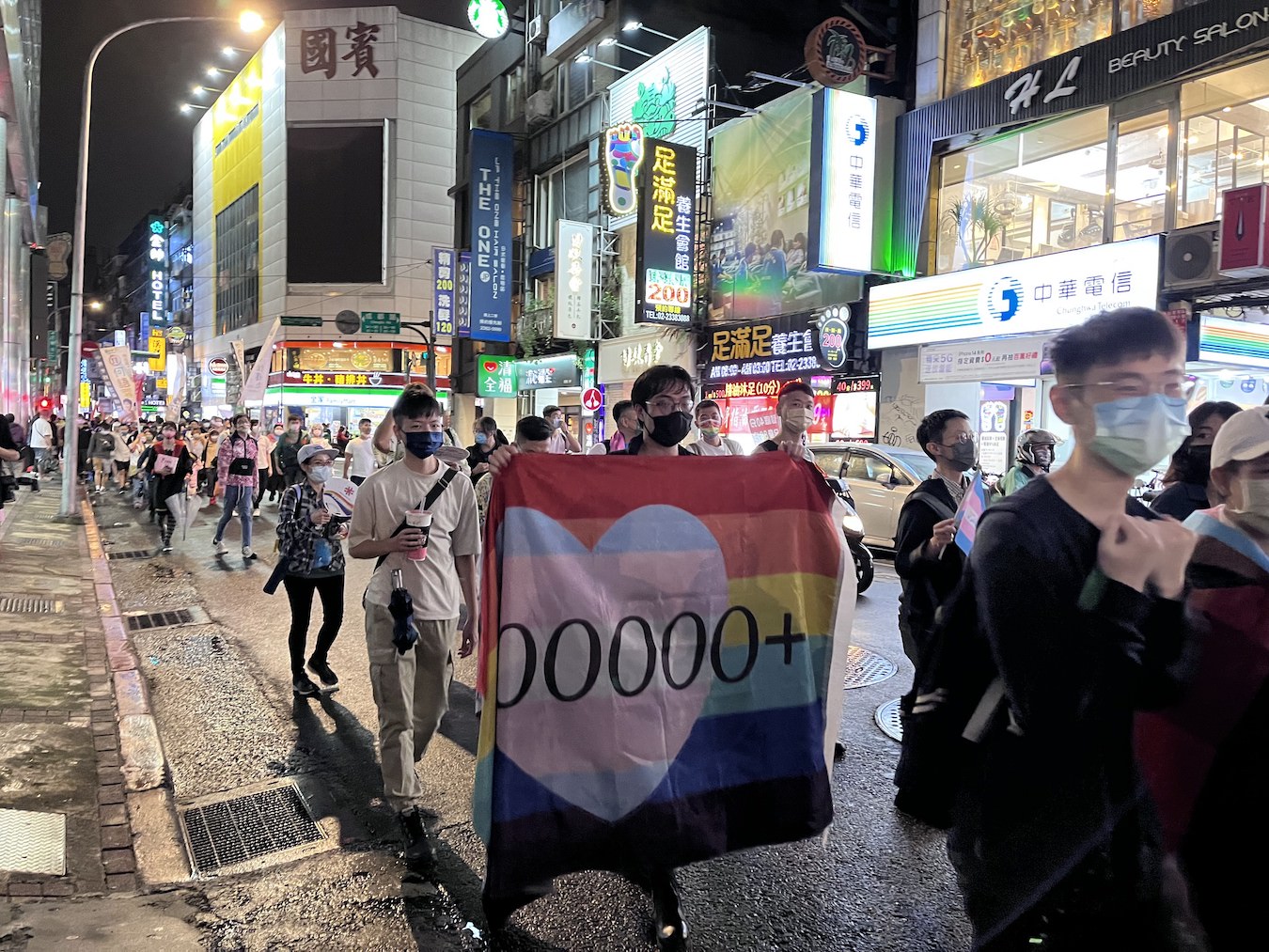 Participants began marching at 7:30PM. This year’s route proceeded from Red House Plaza down Hanzhong Street, westward on Changsha Street, up Kunming Street until Hankou Street, briefly eastward on Hankou Street and southward on Xining South Road until looping back up to Red House via Neijiang Street and Hanzhong Street. Slogans shouted by participants include “Sexual rights are human rights!”, “Shine a light on equality, equality marches forward!”, “Do not stand in the way of sexual rights, transgender people, stand up!” 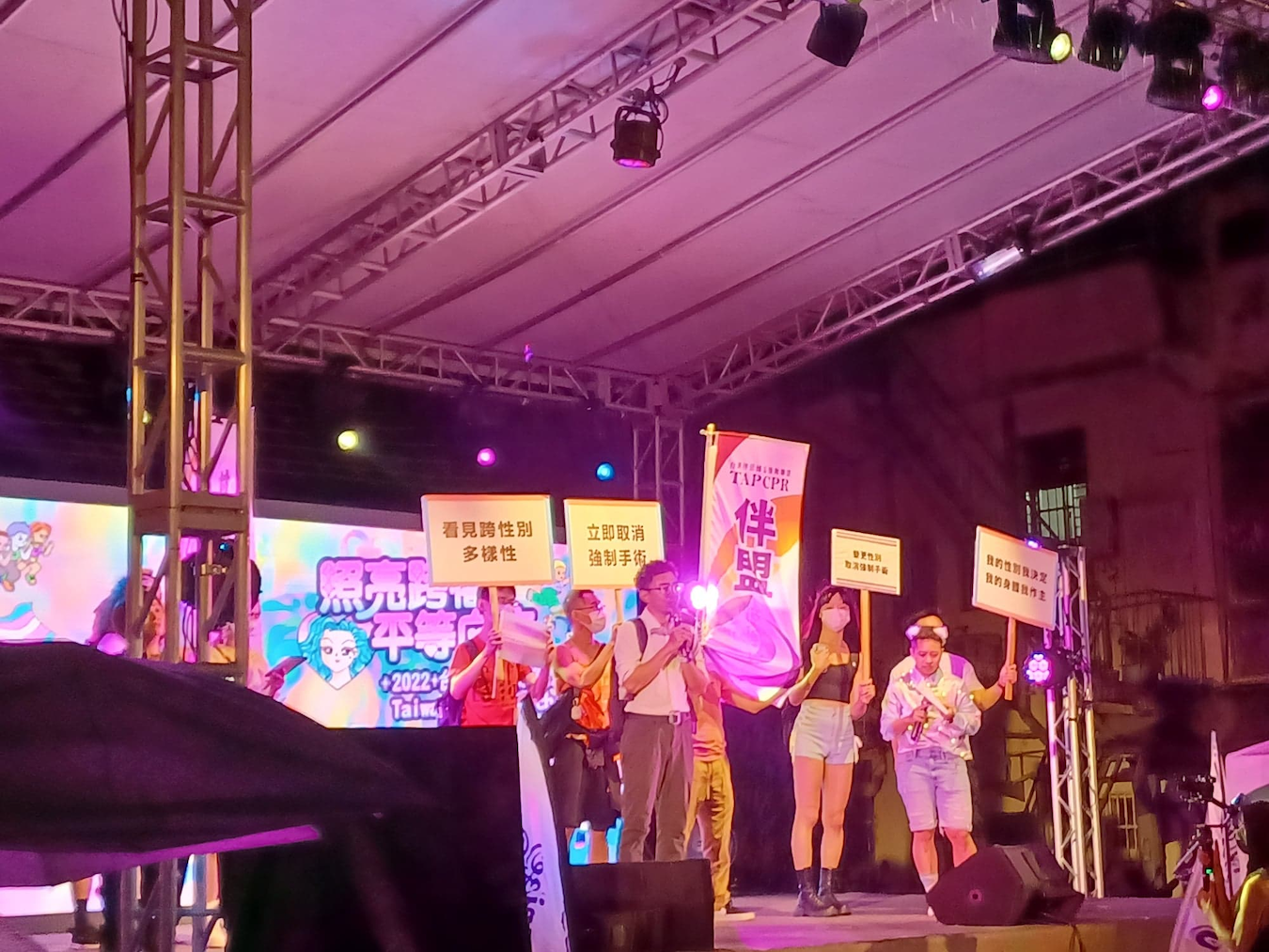 At around 8:45PM, participants returned to the Red House Plaza for another round of statements and a performance by migrant worker beauty pageant queens from the Philippines. Notably, TAPCPR attorney Pan Tien-ching spoke about supporting trans and non-binary rights. He emphasized that legal protections for trans people are still severely lacking, such as workplace discrimination. Pan shared that TAPCPR is not only pushing for the abolishment of the proof of surgery requirement for changing one’s legal gender, but also for full legal protections for trans and non-binary people.