US SENATOR Marsha Blackburn arrived last week on Thursday for a visit that ended on Saturday. This proved the third visit by a US delegation since the start of the month, following a month of whirlwind visits following a historic visit to Taiwan by Speaker of the House Nancy Pelosi. The Pelosi visit was the highest-ranking visit by a US government official to Taiwan in 25 years; the last time that a Speaker of the House visited previously was in 1997, when Newt Gingrich visited Taiwan.

After reports of the Pelosi visit broke in late July, there followed weeks of speculation about whether the visit would take place or not, and whether such a visit was advisable or inadvisable. US President Joe Biden weighed in himself on the matter, suggesting that he did not view the visit as advisable.

However, given the tenor of much of the discussion about the potential visit and what Chinese reactions could be, this probably increased the onus for China to respond with some powerful show of force. Subsequent to Pelosi’s departure followed several days of live-fire exercises held by China around Taiwan, which took place closer to Taiwan than during the Third Taiwan Straits Crisis in the 1990s. China also fired missiles over Taiwan for the first time, some of which ended up in Japan’s exclusive economic zone.

Notably, with a number of Republicans having crossed party lines to support her visit, Pelosi stressed the bipartisan nature of her visit in public remarks made in Taiwan. The next diplomatic delegation that arrived, which was led by Democratic Senator Ed Markey, was also bipartisan in nature. Its arrival conformed more closely to the pattern of US elected officials visiting Taiwan prior to the Pelosi visit, in that it was announced after the fact. 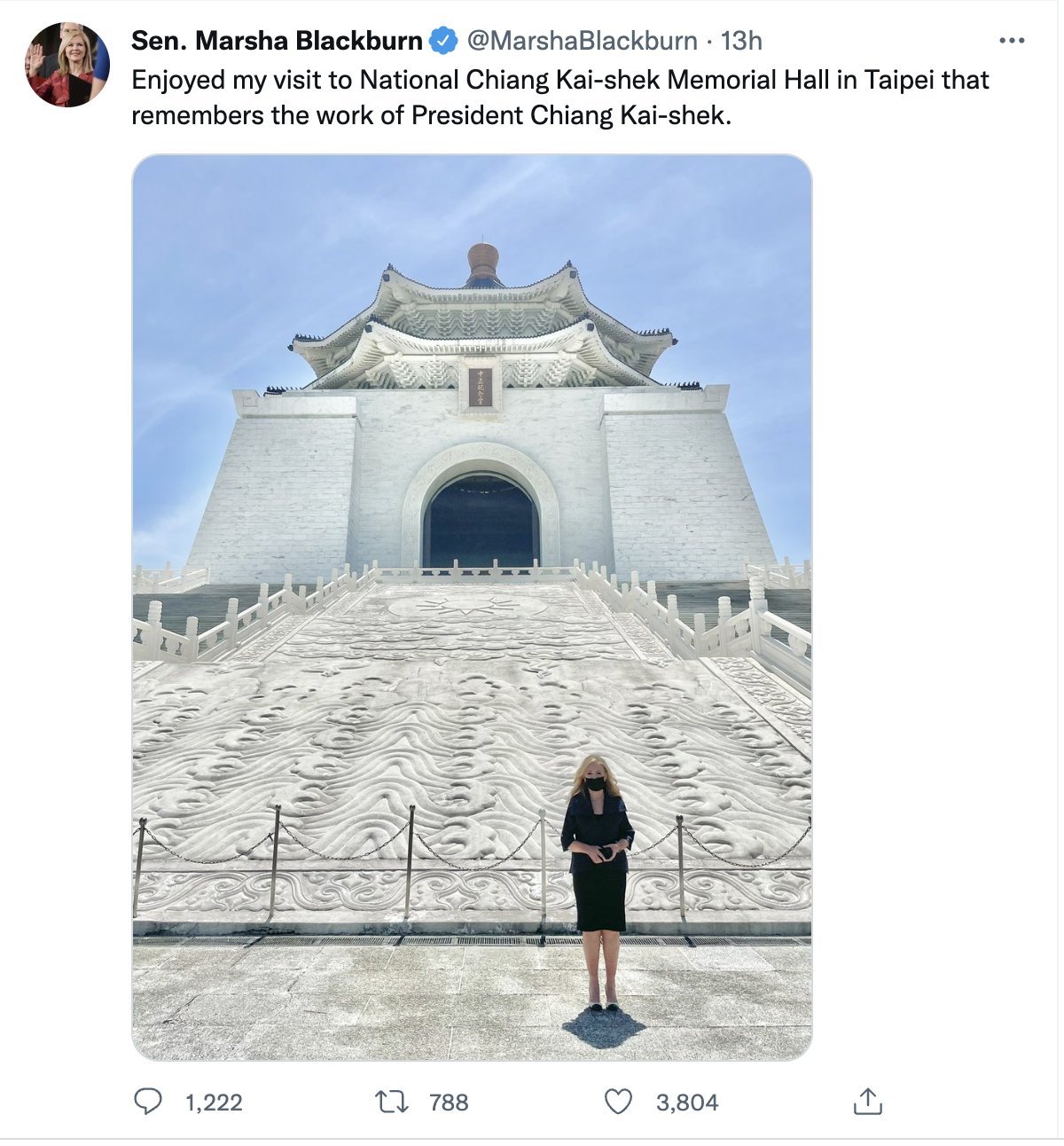 The more recent visit by Blackburn, too, was primarily announced after she had already arrived in Taiwan. Nevertheless, Blackburn’s visit differed from the other visits in that she arrived alone, meaning the visit was not bipartisan.

There were also a number of instances in which Blackburn ventured off script from official US policy, including terming Taiwan an independent nation in a meeting with President Tsai Ing-wen. Despite past claims by her to stand against authoritarianism, Blackburn also raised eyebrows on Twitter by taking a photo of herself in front of the Chiang Kai-shek Memorial with comments that seemed to express admiration for Chiang. The currently ruling DPP in Taiwan is, of course, a party that originated from the Taiwanese democracy movement that contested Chiang Kai-shek and his son Chiang Ching-kuo’s dictatorships.

The Blackburn visit raises the possibility, then, that Taiwan will see a wave of visits by US politicians that will not necessarily take place as visits by delegations prior to the visit did, but in which the nature of the visits will be highly politicized.

Blackburn is a notable supporter of the Trump administration and she has lashed out at what she claimed were five thousand years of Chinese authoritarianism in the past. To this extent, she is anti-abortion, and supports the repeal of gay marriage in the US, never mind its legalization in Taiwan under the auspices of the Tsai administration. Blackburn also opposes efforts to fight climate change, net neutrality, and universal healthcare. This proves another instance in which the Tsai administration has been pushed into alignment with the American far right. 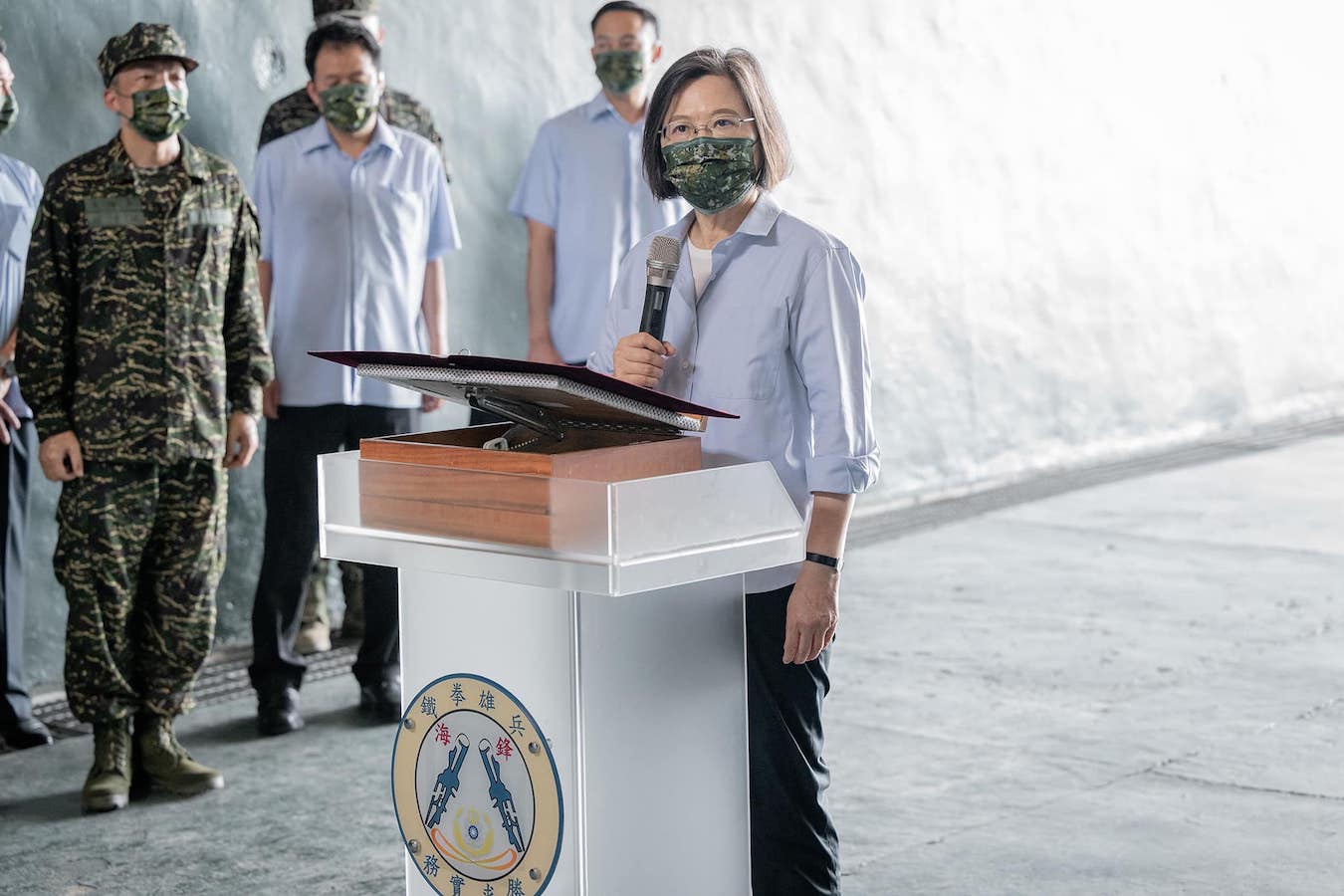 It is expected that former Trump administration secretary of state Mike Pompeo will visit Taiwan again in September. Pompeo last visited in March, as part of what were anticipated by some to be plans to launch a presidential bid. Pompeo expressed support for the Pelosi visit, including offering to join her in a visit to Taiwan. Likewise, in a similar timeframe to the Blackburn visit, a Hoover Institution delegation that included former Trump administration deputy national security advisor Matt Pottinger was present in Taiwan, holding meetings with Tsai that were announced publicly, but done so in a relatively low-key manner.

It is to be seen whether China will act again with threats directed at Taiwan, particularly if news of such visits gets out ahead of time as occurred with the Pelosi visit, or if any US politicians ventures off-script in public comments. This is far from outside the realm of possibility. Either way, following up on the US visits, a bipartisan delegation of Taiwanese legislators is set to visit Washington DC in September.