THE KMT HAS continued to defend a trip made by vice chair Andrew Hsia to China, in spite of criticisms from within the party, from the Mainland Affairs Council, and from the pan-Green camp.

The sensitivity of the trip was regarding the fact that it was announced shortly after unprecedented live-fire drills held around Taiwan by the People’s Liberation Army. The live-fire drills involved missiles being fired over Taiwan, as well as drilling that took place closer to Taiwan than during the Third Taiwan Straits Crisis.

There was backlash from within the KMT shortly after the trip was announced, with a group of younger party members that were primarily city councilors or city councilor candidates in Taipei, New Taipei, Changhua, and Pingtung urging that the trip be reconsidered. The open letter they published emphasized the dangers for the party, in that the trip would strengthen perceptions of the KMT as linked to the CCP in a way that might be electorally damaging for it. 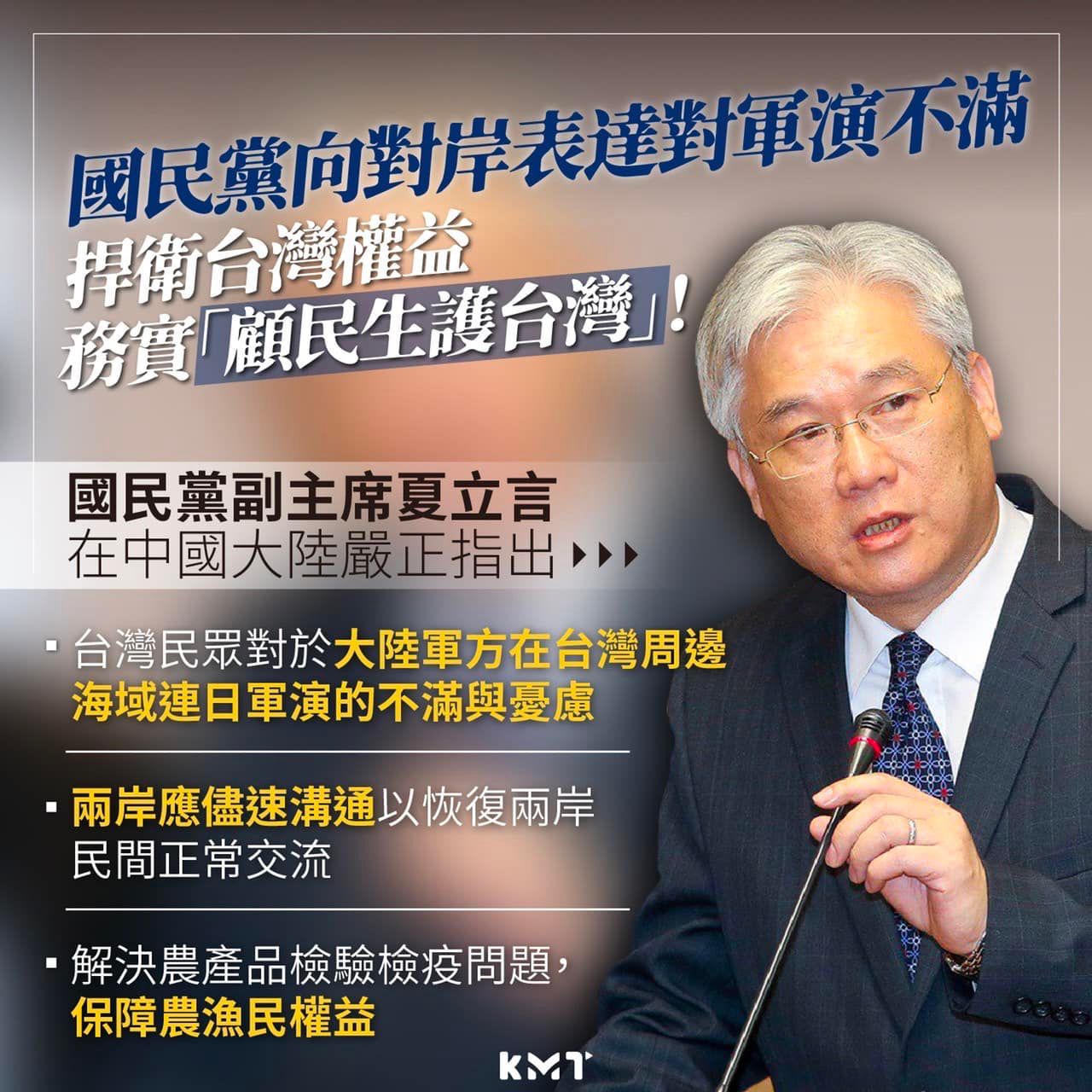 The Mainland Affairs Council (MAC) was critical of the trip, becoming more open in its condemnations as time went on, first stating that it advised against the trip, and then later accusing Hsia of conducting United Front work for China. In particular, the KMT originally framed the trip as scheduled ahead of time, and simply coincided with the Chinese drills. The Presidential Office later stated that the KMT had, in fact, applied for the visit during the same time as the drills.

Likewise, much speculation revolved around whether the KMT would conduct meetings with Chinese government officials during the trip. The KMT initially denied this, stating that the trip was primarily to meet with Taiwanese living in China, as a fact-finding trip regarding their current circumstances. Subsequently, the KMT denied reports that Hsia would be meeting with Taiwan Affairs Office (TAO) director Liu Jieyi.

However, during the trip, Hsia ultimately still met with Chen Yuanfeng, the deputy head of the TAO. Hsia also met with Zhang Zhijun, who is currently the director of the Association for Relations Across the Taiwan Straits, and served as head of the TAO from March 2013 to March 2018. As such, the KMT has been criticized as going against its word, with regard to the visit.

Hsia has defended his trip, stating that he did bring up with Chinese officials how Taiwanese disapproved of the live-fire drilling, and that he also asserted Taiwanese perspectives on other measures that China has taken against Taiwan, such as import blocks of goods ranging from grouper to citrus. Zhang, for his part, labeled Hsia an “old friend.”

Other significant KMT figures have defended the trip, such as former president Ma Ying-jeou, who claimed that it was necessary to continue to conduct communications with China. Ma continues to play a significant role in the party, particularly seeking to dissuade the party whenever it contemplates dropping the 1992 Consensus.

What is more surprising is party chair Eric Chu also defended the visit, seeing as Chu has spent the past few months attempting to change the KMT’s reputation as a pro-China party and instead depict the party as pro-US. Chu made a much-publicized visit to the US for the reopening of the KMT’s DC office earlier this year. 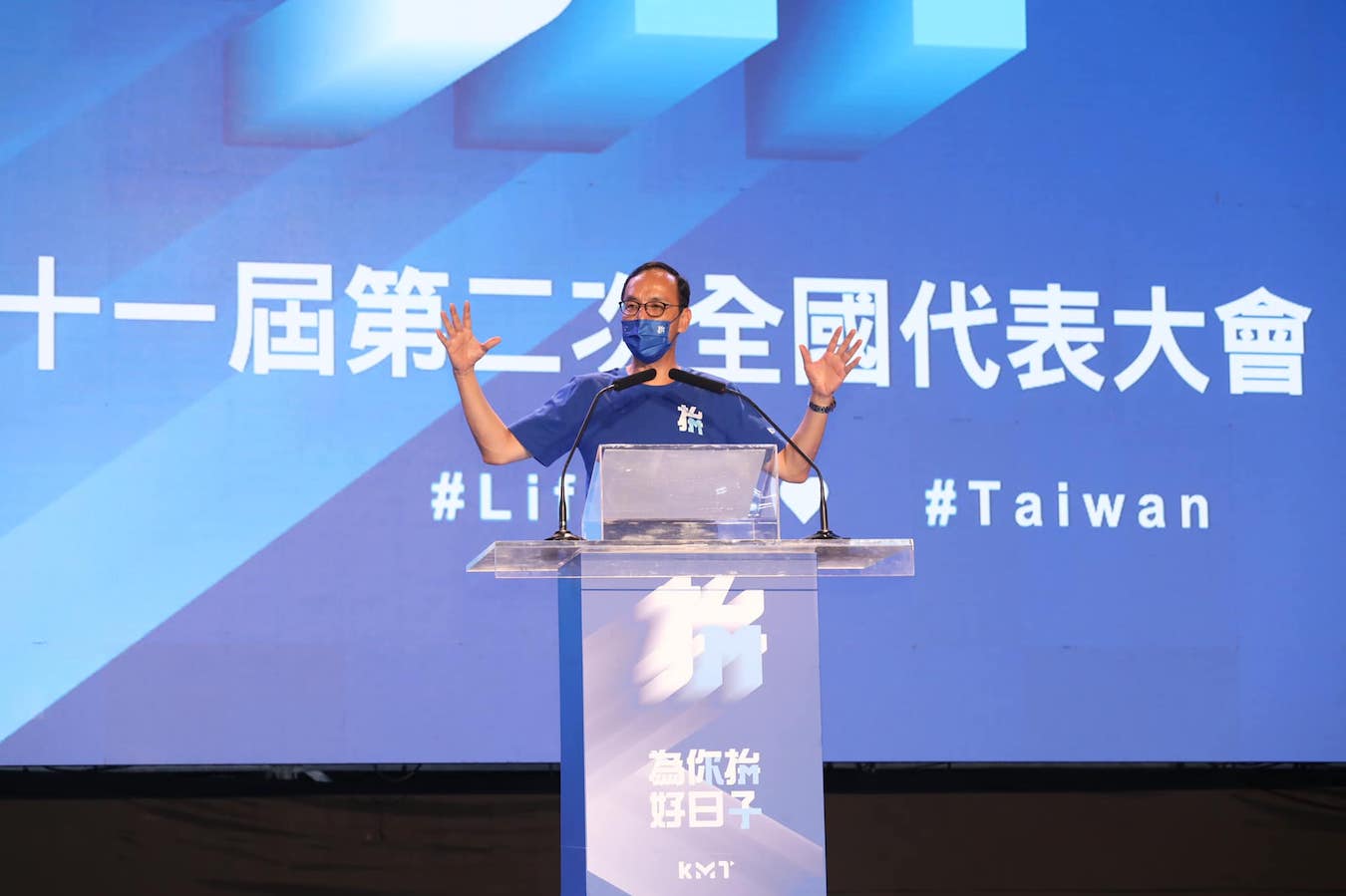 Before Hsia’s visit to China, he attended the annual Straits Forum in Xiamen virtually, which raised questions about whether he did this in coordination with Chu or he went ahead and did it on his own given that this seemed to be contrary to Chu’s pivot to the US. Chu expressing support for Hsia’s visit may reflect his weak position in the party, that he was not able to successfully rebrand the party before pro-China elements forced him to reverse course, so as to maintain his standing in the party. Indeed, this has generally been the outcome when Chu or preceding party leaders, such as Johnny Chiang, floated the notion of dropping the 1992 Consensus or tried to distance themselves from the idea.

The visit has given ammunition to the DPP, though cross-strait issues may not be the focus of the upcoming midterm elections in Taiwan. Yet to this extent, one notes that despite the visit taking place at a sensitive time, the visit did not lead to alarm. The notion of KMT officials meeting with Chinese officials raised fears of the KMT superseding government authority and signing a peace treaty with China in the lead-up to 2020 elections, for example, while this possibility never came up in public discourse regarding the Hsia visit. This perhaps reflects that the KMT’s position has weakened compared to 2020, in that meetings between Hsia and Chinese government officials do not provoke such alarm, in spite of taking place in the same timeframe as unprecedented drills around Taiwan.