HONGKONGERS—whose freedoms were crushed by the same party who entered into an agreement of ‘no limits’ with Russia in February—are well aware of the fight against authoritarianism currently being waged in Ukraine.

This might explain why so many Hongkongers at St John’s Anglican Church in Notting Hill proudly displayed their yellow umbrella pins next to Ukrainian flag badges. The two are distinct, but altogether synonymous: a symbol of tenacious resilience against all odds.

Hongkongers had gathered at this unlikely nexus of solidarity and resistance for a screening of Revolution of our Times. The 145-minute-long documentary tells the story of millions of ordinary Hongkongers engaged in the pro-democracy demonstrations that swept the city between 2019 and 2020.

As the documentary ended, the sombre audience was transported from one frontier of resistance to another: Roy Chan, pastor of the Good Neighbour Church, called in live from Lviv, Ukraine. 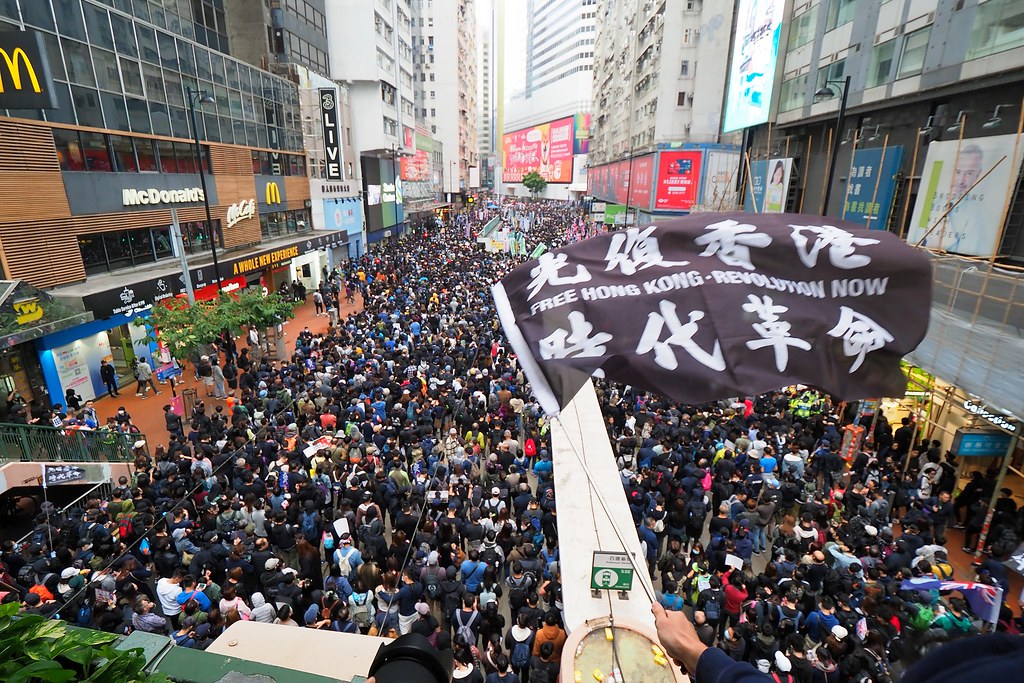 Chan had been in Ukraine for a few hours, arriving in Lviv by car on the 9th of April. He had driven 134 miles south from Lublin, Poland, where he had been helping refugees for the previous month. For the next two weeks, Chan and his church travelled 1400 miles around the frontiers of Russia’s war. They would visit four provinces and seven cities: Lviv, Lutsk, Bila Tserkva, Kyiv, Bucha, Poltava and Kharkiv.

What was a church from Hong Kong doing at the centre of a warzone in Eastern Europe? The story begins three years ago, five thousand miles away in the coastal city of Hong Kong.

In 2019, Hong Kong’s legislature proposed the Fugitive Offenders Bill, which would have given its judicial system the power to extradite suspected criminals to face trial in mainland China.

This led to the cathartic pro-democracy movement, which saw the bill as a threat to Hong Kong’s civil liberties.

In an open letter written to Hong Kong’s chief executive at the time, Sophie Richardson of Human Rights Watch said: “The proposed changes to the extradition laws will put anyone in Hong Kong doing work related to the mainland at risk.

“No one will be safe, including activists, human rights lawyers, journalists and social workers.”

As millions joined the movement, Chan and his Good Neighbour Church played a crucial role in establishing the ‘Safeguard Our Generation’ campaign. With increased casualties and police brutality, it aimed to provide humanitarian aid and de-escalate violent clashes between protesters and police.

Soon after, the National Security Law was passed in June 2020. Approved by China’s rubber-stamp parliament, this was a piece of legislation that criminalised vague notions of ‘secession, subversion, terrorism and collusion with foreign organisations’.

In December 2020, Chan and his church were targeted by police. Although not formally accused of anything under the new law, they were charged with fraud and money laundering. Its assets were frozen in December 2020.

Like thousands of Hongkongers who had been involved in the demonstrations and felt threatened by reprisals and the new security law, Chan and his family fled to the UK, where they now live.

Chan has vehemently denied the charges, and thinks they are an act of political retaliation intended to destroy the church’s reputation.

He said: “Charges of economic crime are a very common strategy used by the Chinese Communist Party to target someone who angers them.”

When news came of Russia’s invasion of Ukraine just over one year later, Chan felt immediate empathy for Ukrainians. The church believes Ukrainians are being subjugated by Russia in the same way Hongkongers are being oppressed by China. Both were smaller democracies that have suffered at the will of their larger authoritarian neighbour.

For Chan, the CCP has a clear stance: they stand with Russia. They are an alliance of dictatorships.

This is why, in April, Chan and his church found themselves thousands of miles away on the bitter frontline in Ukraine. They were there to stand up for democracy, freedom and human rights.

After stopping in Lviv for two days, Chan and his fellow aid workers travelled 90 miles northeast to Lutsk, a city in Volyn province. They were trying to work out the safest route to Kyiv, where they arrived via Bila Tserkva on April 13th.

They stayed in a Kyivan hotel for six days, and travelled every day to Bucha, a city on the outskirts of Kyiv now associated with mass graves and Russian war crimes. Just two weeks beforehand Russian troops withdrew after failing to capture the city, leaving a trail of death and destruction.

The church was there to provide food, medicine and counseling for survivors of the offensive. When they arrived, the church encountered an elderly woman who had been trapped in the town for around 30 days by constant shelling. Stunned, the woman told Chan she had witnessed the execution of children by the Russian Army.

Throughout their journey, they would often use Google Translate to communicate with survivors. Some Ukrainians would begin to cry. They couldn’t believe Hongkongers had come from so far away to help.

However, most revealing for Chan was the way in which many Ukrainians, trapped in shelters without electricity or gas for weeks, simply shrugged off the offensive and showed resolve to rebuild and carry on with their lives.

After spending time in Western Ukraine and Kyiv Oblast, Chan saw news of the deteriorating situation in Kharkiv, a city in northeast Ukraine. Like many of us, he was aware of the humanitarian disaster unfolding there.

Despite being warned against it, he made the decision to gather supplies and head to the besieged city. They hired a local guide and were driven a further 300 miles further east to Kharkiv, near the border with Russia.

On the way, their guide asked Chan why they had come to the frontline of Russia’s invasion of Ukraine.

Chan said: “As Hongkongers being oppressed by the Chinese Communist Party, we are fighting together with Ukrainians in a battle against authoritarian regimes.”

They stayed in the nearby city of Poltova, and travelled to Kharkiv over a period of three days.

Each day, they moved against the steady flow of refugees leaving Kharkiv, and were met by the sound of relentless shelling and explosions. Undeterred, they spent three days here delivering food and medicine to elderly people and cancer patients, unable to flee the conflict.

They met a Georgian lady whose son was gravely ill. The church managed to get blood thinners to the patient, as the family couldn’t afford or access medicine due to their expense and the fact pharmacies had been destroyed by Russian aerial warfare.

After spending time in Kharkiv, Chan made the decision to travel back to Lviv, then Poland. He returned to the UK on the 25th of April, where the church continues to organize and speak out against authoritarian regimes all over the world, from China and Russia, to Afghanistan and Myanmar.

Thousands of miles from the frontline in Ukraine, Chan spoke over the phone whilst he took the train to Birmingham to give a Sunday sermon. Full of optimism, vistas of war evidently had not deterred him from the church’s mission. Since resettling in the UK, the church has gained over 100 members across Bristol, London, Manchester and Birmingham.

He hopes to re-establish the Good Neighbour Church with a permanent site in London. As well as a place for giving sermons, he aims to keep the spirit of Hong Kong alive with a Hong Kong Protest Memorial Hall, a place to house a collection of cultural relics, audio and video of the pro-democracy movement.