One of the deaths was a case originally classified of medium severity, which became a serious case, and then died. The most cases were present in New Taipei, with 3,241 cases, followed by 1,892 cases in Taipei, 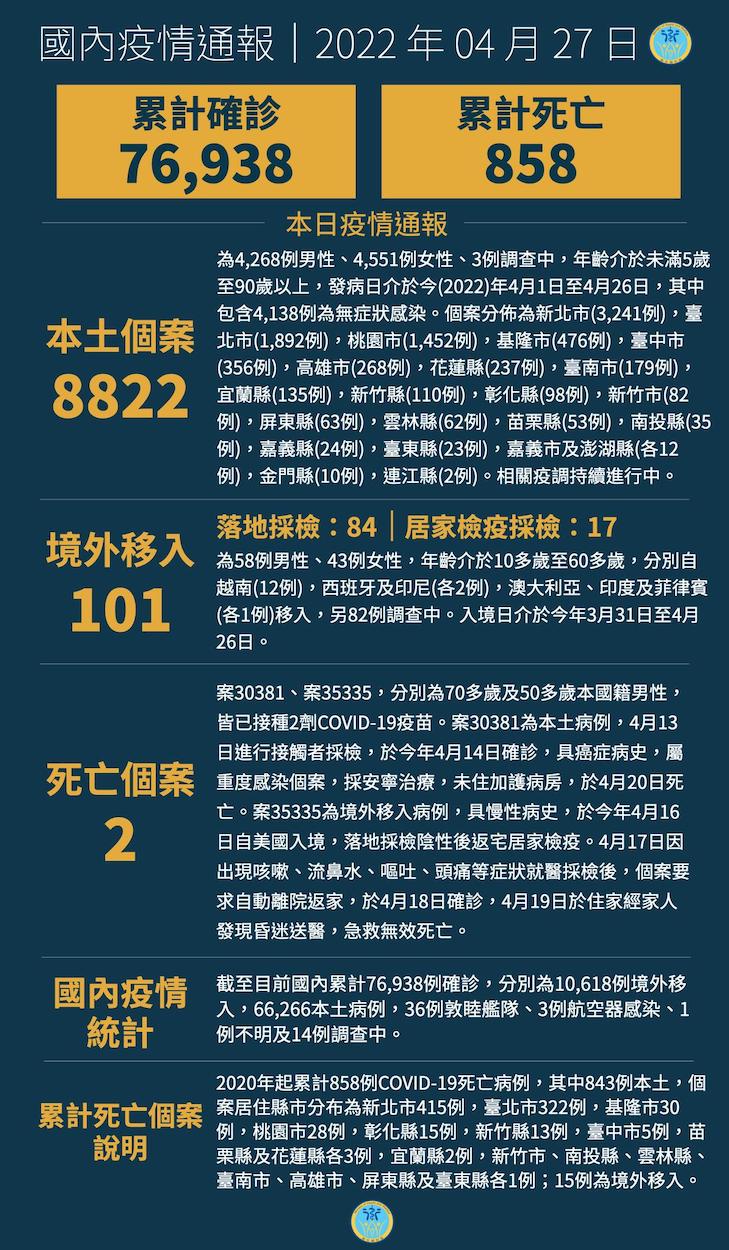 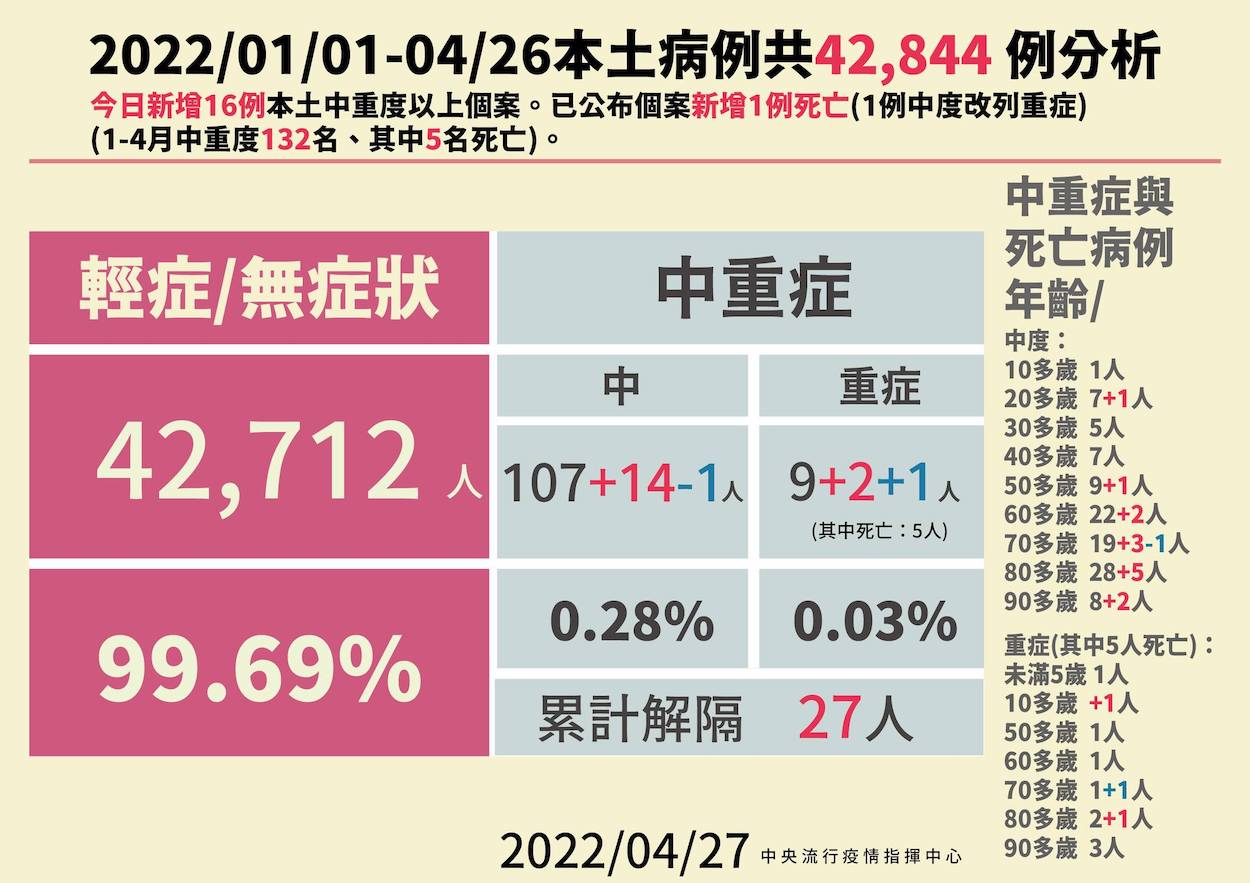 Instead, the government will pivot toward use of the Social Distancing app that it rolled out last year. The app detects when individuals are within two meters of someone who is COVID-19 positive using their cell phone. The CECC is currently trying to push for broader use of the app, which will be more accurate with more users. Over 8 million are currently using the app. Stores will not be required to contact trace using the Social Distance app, as with the QR code registration system, due to the fact that contact tracing will not be carried.

Current COVID-19 measures will be maintained from May 1st to May 31st, however. This includes mandatory mask wearing, which is to last until May 31st.

There are concerns about insufficient supplies of COVID-19 tests in Taiwan, particularly with tests unavailable at many convenience stores, pharmacies, or other locations where they are normally available. Consequently, the CECC will be implementing a real-name registration purchase system for rapid tests modeled after the distribution system previously implemented for medical masks, at a time in which supplies of medical masks were scarce and so they were rationed among the general public.

Rapid tests will be available for purchase through this system at 4,909 pharmacies, 58 rural clinics, and 967 purchasing areas, and will be available in packs of five tests for 500 NT. Purchasing is tied to the National Health Insurance card, with each card allowing for one pack of five to be purchased. Families have been advised that one or two packs should be sufficient for testing needs.

50 million tests are being prepared, with 2 million released per day. It is expected that the CECC may move to boost production of rapid tests, similar to how manufacturing capacity for medical masks was rapidly increased.

CECC head Minister of Health and Welfare Chen Shih-chung reiterated today that quarantine periods continue to be maintained for new arrivals in Taiwan, so as to prevent the potential spread of new variants of COVID-19 and in order to ensure that the medical system in Taiwan is not overwhelmed due to the entrance of new transmission chains of COVID-19. The plan, however, is to relax entry quarantines in time. Quarantine measures for pilots and other airport staff has also been relaxed to some extent, even though regular PCR or rapid testing requirements remain. 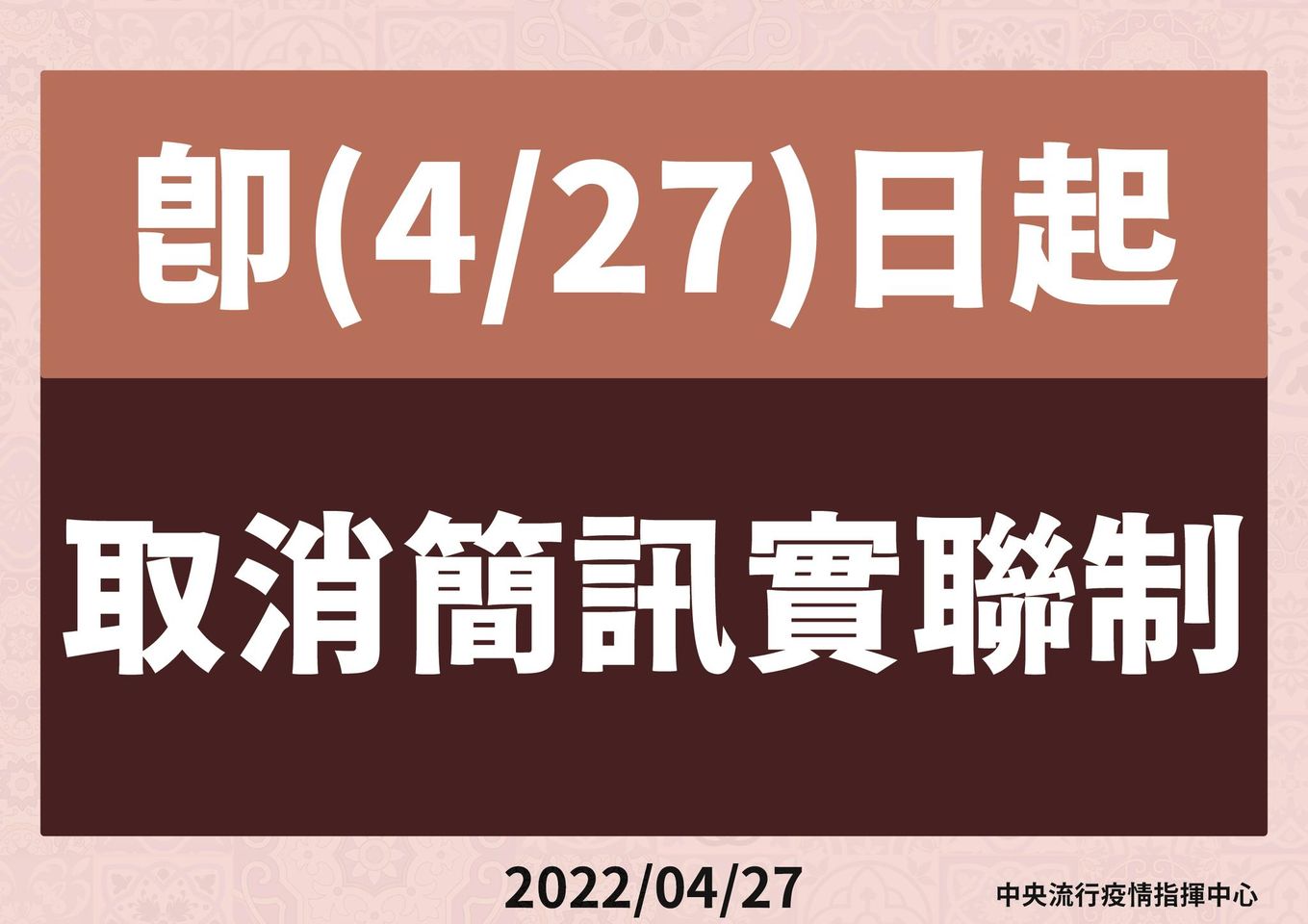 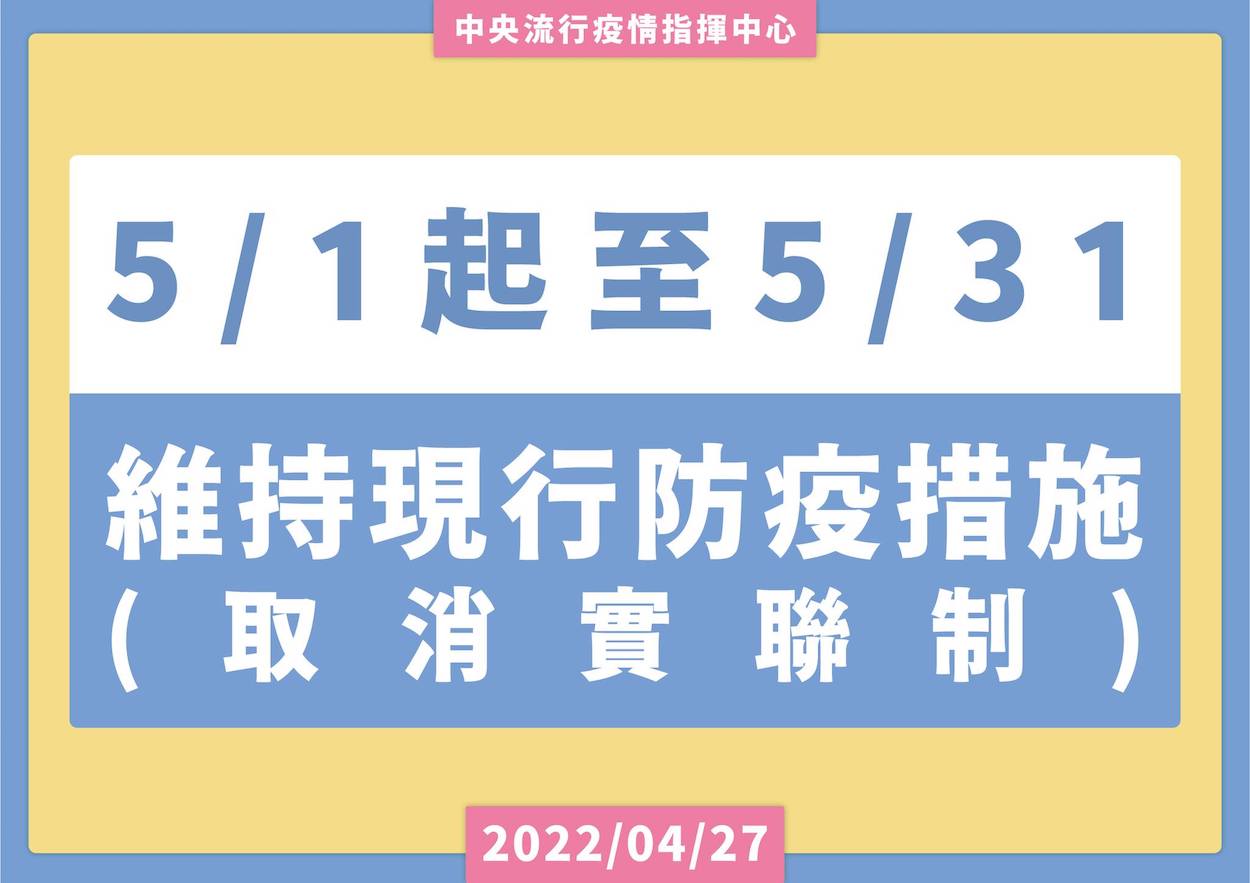 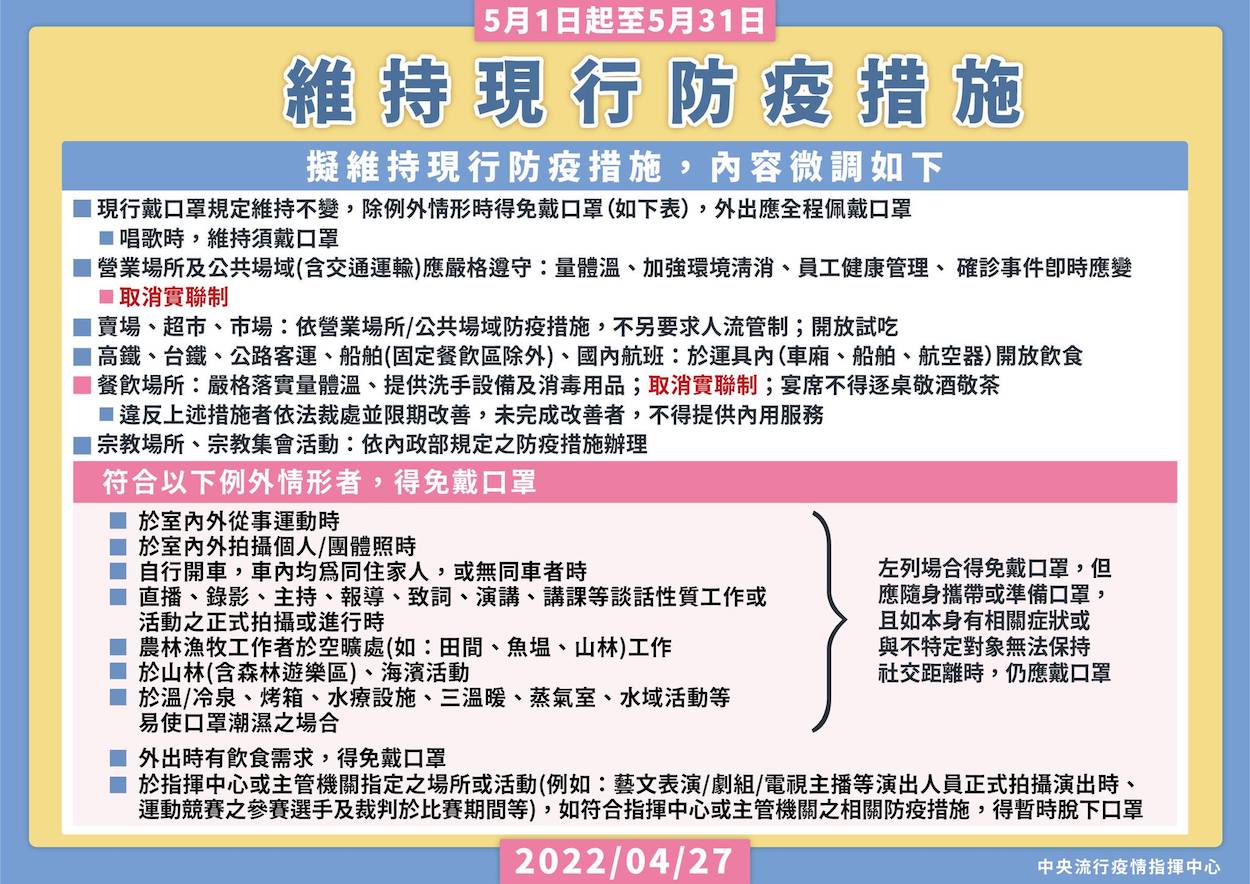 Infographics on the phasing out of the QR code registration system and maintenance of other measures. Photo credit: Ministry of Health and Welfare/Facebook

The CECC also continues to emphasize that it does not intend to relax all measures immediately, so as to prevent an explosion of cases that would overwhelm the medical system in Taiwan. Nevertheless, it intends to continue with the relaxation of COVID-19 measures.

On the other hand, Taipei mayor Ko Wen-je has continued with claims that Taiwan will imminently see a high number of deaths and stated that he may put Taipei in a “soft lockdown” if cases rise and there is insufficient hospital bed capacity, which would involve suspending indoor dining, remote classes and work, as well as other measures. As with in the past, Ko is probably hoping to attack the Tsai administration as failing to do enough to stop the spread of COVID-19. Taiwan does not look as though it is anywhere close to insufficient hospital bed capacity given the low number of medium to severe cases, as well as that the government is not quarantining all COVID-19 cases.

It is to be seen whether Ko would genuinely move ahead with such plans, which would likely upset the restaurant industry, and Ko would have little backing on if mayors of other major cities in Taiwan are not willing to follow suit with a similar escalation. Nevertheless, polling does show that even if the pan-Blue camp’s position is weak, the Tsai administration’s approval rating may be affected by the current shift in COVID-19 measures, and that not all members of the public approve of the shift toward co-existing with COVID-19. This will probably be perceived by members of the pan-Blue camp as a political opportunity.