Where Does Taiwan Stand Regarding the Ukraine Crisis?

SINCE A PROVOCATIVE speech by Russian president Vladimir Putin earlier this week, one has seen a number of comparisons between Ukraine and Taiwan circulating in the media. In Putin’s speech, he declared that he did not view Ukraine as qualifying to be a nation-state but as an entity that had been created by the Soviet Union, while also stating that Russia would on the other hand acknowledge separatist-controlled regions in Donetsk and Luhansk.

Much commentary internationally views this recognition as the pretext for a military occupation of Ukraine, which could expand to trying to exert control over Ukraine’s national territory as a whole. Although some analysts and commentators originally viewed Putin as reacting to the potential inclusion of Ukraine in NATO, in the speech Putin primarily spoke of the borders of the Russian empire, and depicted Ukraine as an invention of the Bolsheviks rather than any historical nation-state.

It may not be surprising, then, that there have been comparisons made to Taiwan, in terms of China’s historical claims over Taiwan. This comparison is highlighted by growing international concerns regarding alignment between Russia and China, as highlighted by a gas pipeline agreement and a recent statement of partnership after a meeting between Chinese president Xi Jinping and Putin, which some have termed a de facto non-aggression agreement. 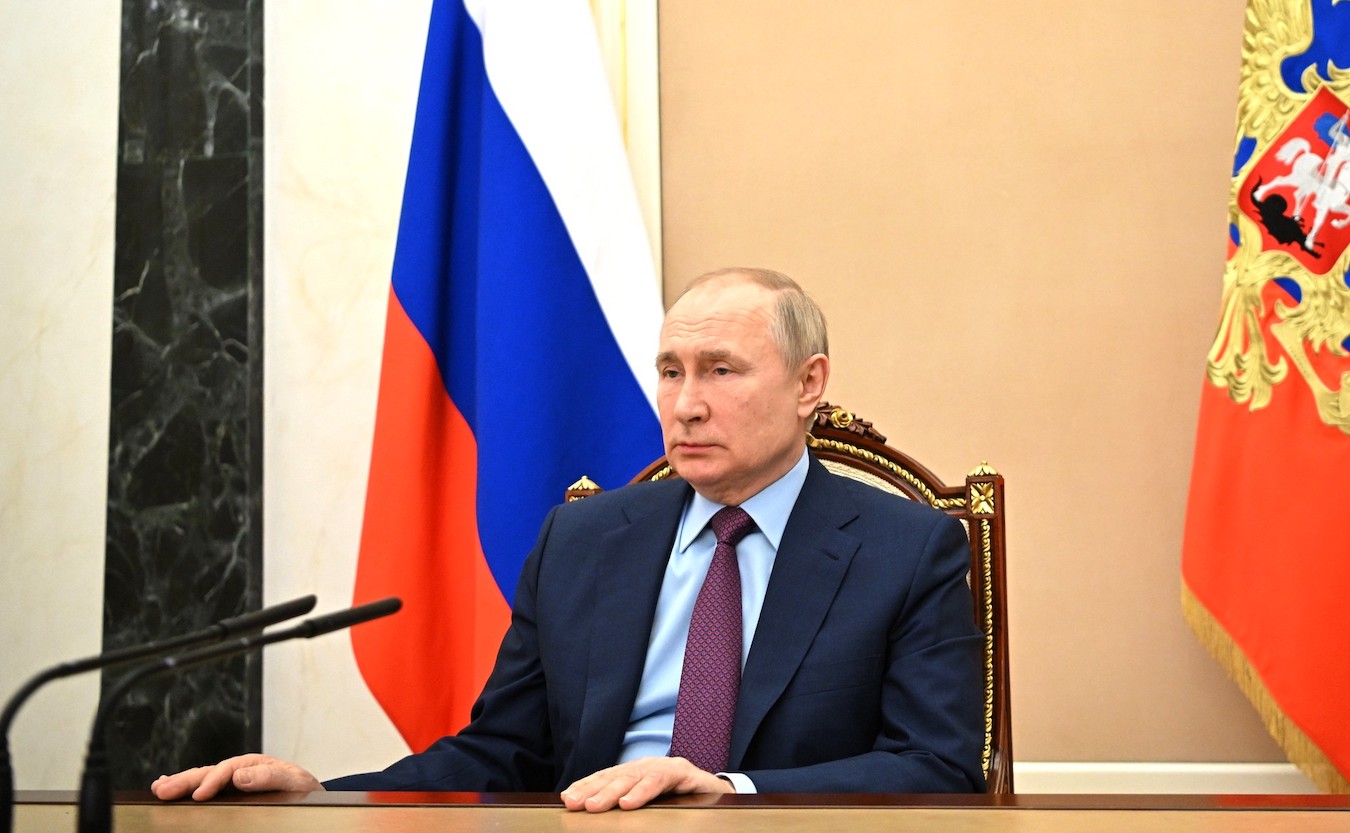 Rhetoric has been hyperbolic, inclusive of news articles that suggest China could take advantage of America’s focus on the Ukraine crisis to conduct an invasion of Taiwan. Nevertheless, this fear-mongering is inaccurate, Chinese troops would have to mass on the shores in preparation for an invasion and this would be detectable far in advance. That this would be the case can even be seen with regards to the possible invasion of Ukraine, as for what could be a primarily land-based invasion, the Russian army spent over a month moving into place. The logistics of a naval-based beachhead landing as China would like to conduct would be far more complicated. For its part–knowing that there will inevitably be concerns despite the low odds of a Chinese invasion–the Tsai administration has ordered Taiwanese troops to be on high alert, probably to reassure the public more than anything else.

Certainly, what the two contexts share is being a smaller country is threatened with invasion by a much larger one. It is also true that Eastern European countries partly leverage on the US as a bulwark against the geopolitical threat posed by Russia, hence how current tensions are over Ukraine’s possible entrance to NATO–and why they have sought to strengthen relations with Taiwan as of late.

That being said, other comparisons fall short. The relationship between Ukraine and the US is not comparable to that between the US and Taiwan, with the Chiang dictatorships only able to maintain support in Taiwan for decades due to US support, pointing to the strong historical relationship between the US and Taiwan. Recent US diplomatic visits to Taiwan from elected officials also serve a strong signal of US support of Taiwan, as do arms sales.

Likewise, the centrality of Taiwan to the global economy should not be discounted. The global economy is dependent on Taiwan for semiconductor manufacturing, with TSMC alone producing over half of the world’s made-to-order chips. Both the Chinese and US economies are reliant on Taiwan for semiconductor manufacturing, which disincentivizes China from invading.

One notes that the economic impact on China from invading, not to mention the shockwaves to the global economy, may be more than China can handle. China also has to take into account the severe death toll from a beachhead invasion, as contrasted to a land-based invasion, with some estimates that deaths could be in the hundreds of thousands. The CCP may not be able to weather the blow to its credibility from the death toll. In contrast, one notes that Russian troops are presently moving into Ukrainian areas that they already de facto control, though an invasion of other parts of Ukraine cannot yet be ruled out.

As with how the US withdrawal from Afghanistan provoked contemplation on whether Taiwan could suffer a similar fate, or whether the blow to US credibility from the aftermath of the withdrawal would affect Taiwan, either way, the Ukraine crisis has led to reflection on Taiwan. Despite the warnings of experts where comparisons do not accord to reality, the public is less likely to make fine distinctions. As such, comparisons are inevitable and could have an impact on global discourse about Taiwan. 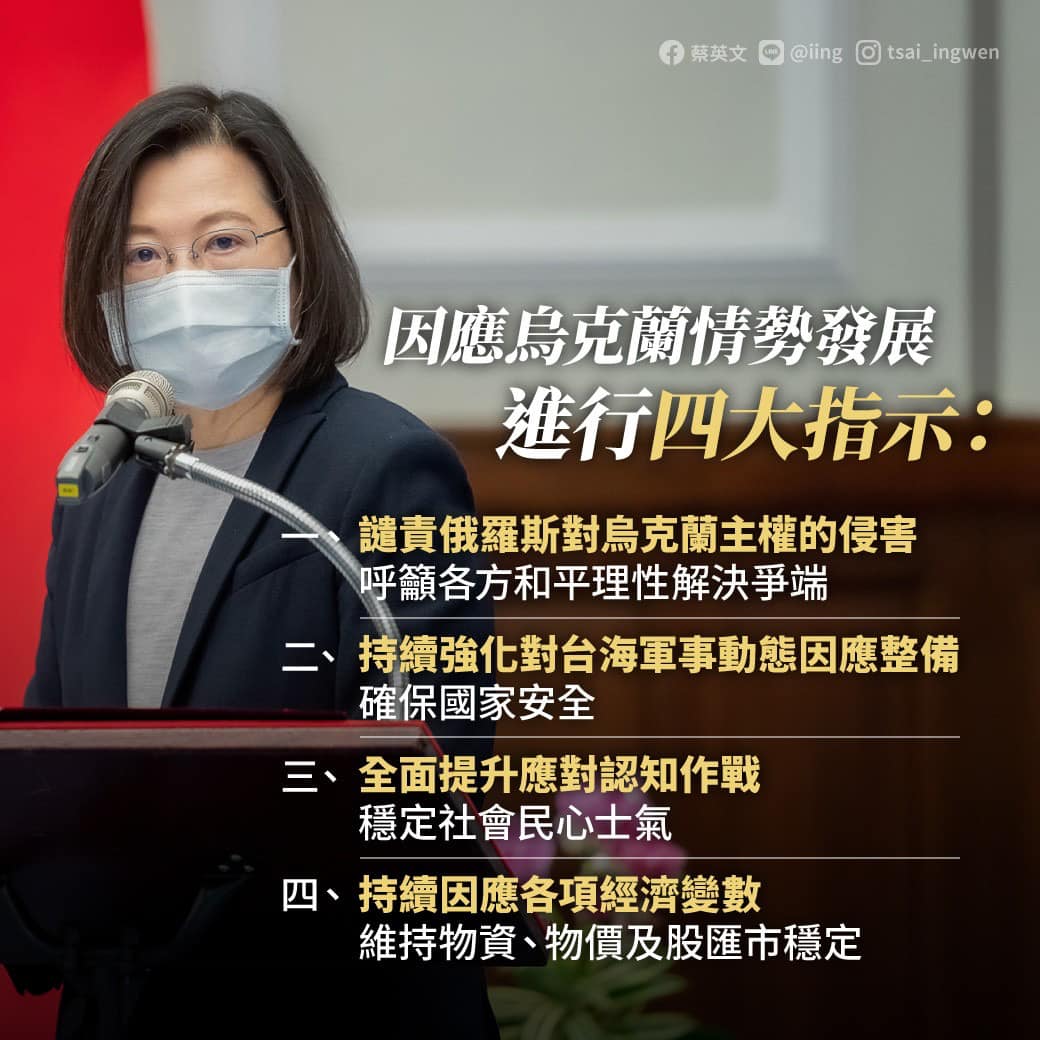 On the other hand, there are perhaps some aspects that are comparable between Taiwan and the Ukraine crisis. For example, one notes that Russia has sought to depict Ukraine as the aggressor, with Russian state-run outlets suggesting unprovoked Ukrainian attacks on Russian troops. By contrast, Ukrainian troops have reportedly been ordered not to fire even if fired on, and have not done so even after deaths.

One can imagine Taiwan behaving similarly if Taiwanese warplanes conducting interceptions of Chinese planes were fired upon, in the course of China’s now frequent incursions into Taiwan’s Air Defense Identification Zone. Namely, weaker powers that face the threat of invasion from much larger ones face the imperative of needing to avoid pretexts for escalation from those larger powers. Weaker powers also need to beware of false flag operations, intended to drum up outrage to facilitate an invasion.

The perspectives of Ukrainians are ignored in favor of the views of great powers, with Ukraine treated as a geopolitical chess piece to be traded off between them. This, too, has been how the fate of Taiwan’s residents has usually been discussed in international media, with scarce consideration of what Taiwanese hope and desire for their future, but discussion of what great powers desire for Taiwan, or how Taiwan fits into their geopolitical calculus.

Ironically enough, much like how Taiwanese have reacted to Chinese threats, Russian threats directed at Ukraine have pushed it further away from Russia. Polls now show that a majority favor NATO membership, while they previously signaled ambivalence about the issue.

In the meantime, the Ukraine crisis is likely to push geopolitical alignments into sharp focus. In line with international sanctions against Russia, the Biden administration is in talks with Japan, Singapore, and Taiwan regarding blocking technological exports that Russia is reliant on. If this takes place, Asian tech giants will be pushed into sharper alignment with the US in the Asia Pacific, though Taiwan could potentially face issues from being blocked to supplies it needs from semiconductor production from Russia, and there have been warnings regarding Russia’s ability to affect global oil supplies by cutting off access.

On the other hand, China has been put into an uncertain position vis-a-vis the Ukraine crisis in that China could contemplate aligning itself with Russia against western powers. But China also wishes to depict itself as a responsible international actor at present and the costs of aligning with Russia at this juncture would be high. As such, China has joined in calling for adherence to the Minsk Agreement, which Russia has invalidated.

Though there has also been much fear-mongering regarding the possibility of China-Russia alignment, this is far from an imminent possibility. Putin has in many ways put China in a complex position to try and force a response from it. One cannot rule out future alignment with Russia down the line if relations between China and western countries further deteriorate, but this is not in the immediate future.

Ironically, invalidating a political polity’s claims to nationhood and claiming it as its own sovereign territory is a move out of China’s playbook, where Ukraine and Taiwan are concerned. But China may wish to avoid opening a can of worms where questions of sovereignty vis-a-vis Taiwan and Putin’s recognition of Donetsk and Luhansk are concerned.

And, to this extent, China’s messaging on the issue has been suitably contorted. Chinese state-run tabloid, the Global Times, has attempted to frame Taiwan as China’s equivalent of Donetsk and Luhansk, hence why the international community should not recognize Taiwan. At the same time, Chinese government spokespersons have tried to criticize expressions of support for Ukraine from the Tsai administration, which criticized Russia as violating Ukraine’s support, as merely aimed at trying to draw western sympathy for Taiwan. This occurs while China has attempted to intimate Taiwan as a security issue equivalent to why Russia originally framed its stance vis-a-vis Ukraine as a concern over Ukraine joining NATO.