Four cases were added to a kindergarten in Kaohsiung, with the transmission chain traced back to the cluster at a hotel in Jiaoxi, Yilan. One of this cluster is the aunt of a previous case. This school is not large, with around 100 individuals linked to the school, but 6 have proven positive for COVID-19 already. Any possible risks to the community are in Kaohsiung.

No cases were added to the Port of Kaohsiung cluster, suggesting that the situation there is increasingly stable. 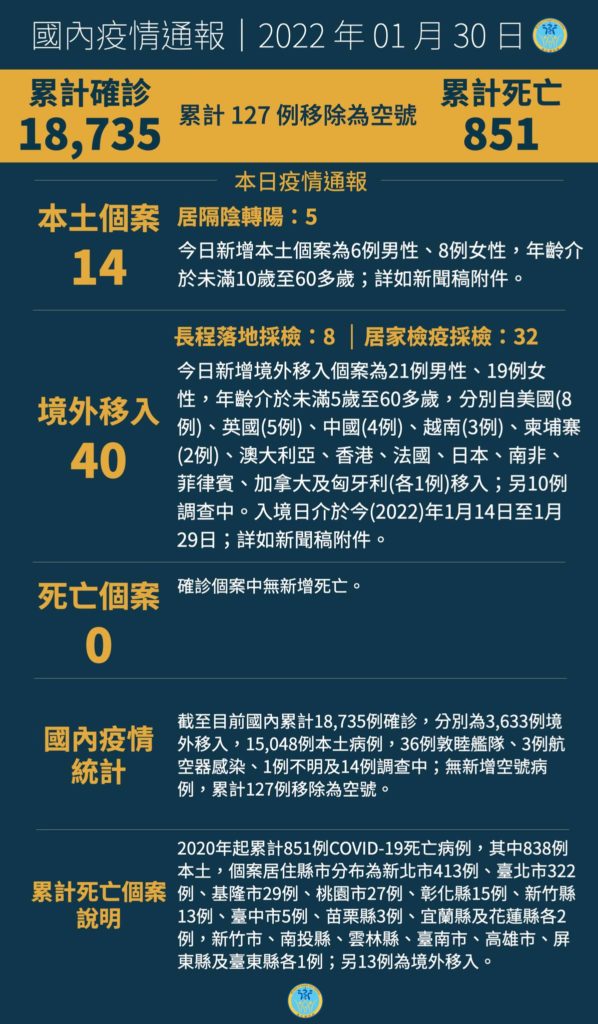 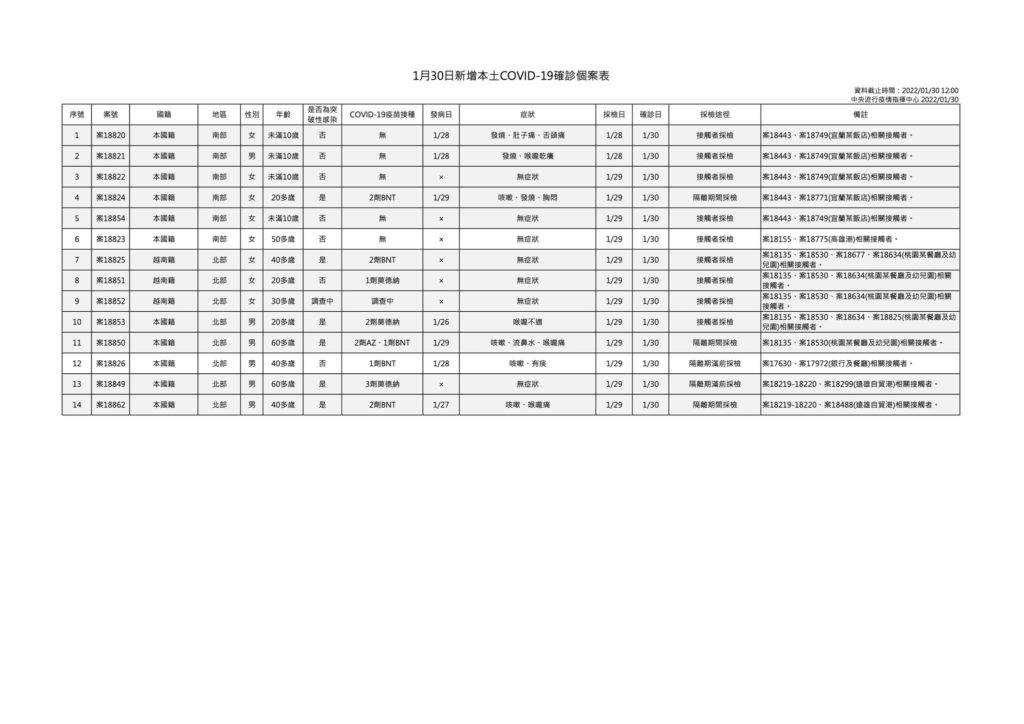 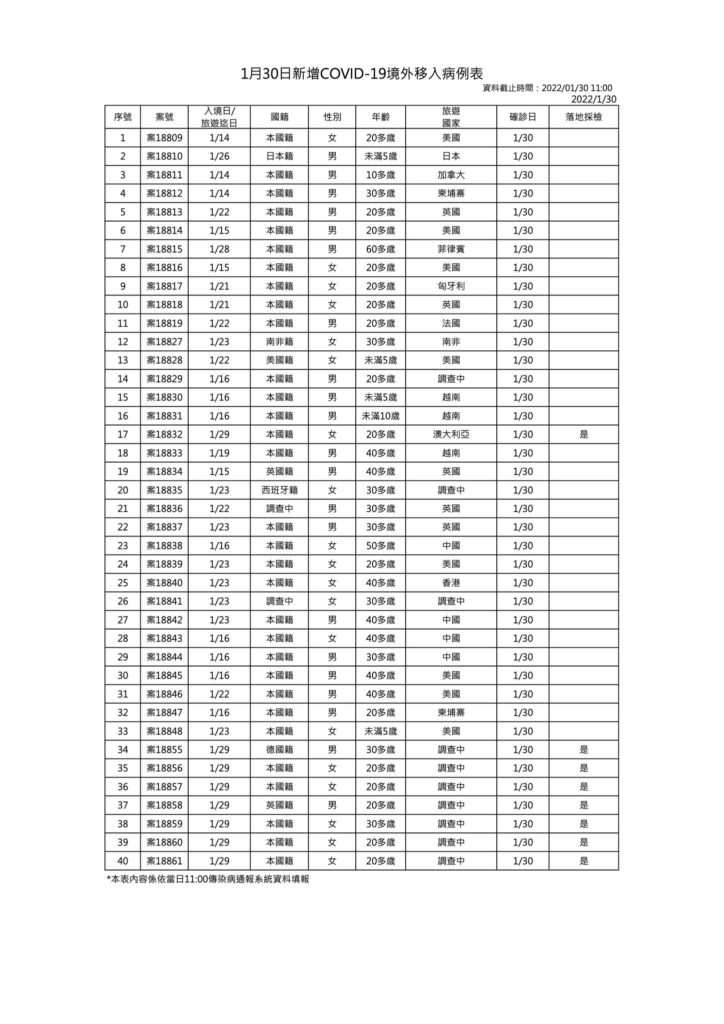 Another case was linked to the Tasty eatery, due to an office worker that ate there and infected a co-worker. There is no risk to the community due to this having been found while in quarantine.

A group of five that visited a nail salon in Taoyuan has been found to be positive for COVID-19, with four working in the same company. Two new cases were found at Askey in the Farglory Free Trade Zone. A case was found in Pingtung, due to travel to Kaohsiung, and a case was found in Tatung.

According to Minister of Health and Welfare Chen Shih-chung, testing counts have not gone down in the past few days due to the Lunar New Year holiday, as testing sites continue to be in operation. As such, the lower number of domestic cases in the last two days is not due to lower testing.

Reassuringly, there have not been new cases linked to the Longtan retiree or in Bade, but of concern are the new clusters at the Taoyuan nail salon and the Kaohsiung kindergarten. Sources of infection are unknown for a case announced yesterday in the Taoyuan city government, a real estate agent in Taipei, at a Chien Tu hotpot, and in Tatung. These four incidents are thought to have three primary transmission chains.

An individual that attempted to flee quarantine from Taoyuan to Kinmen was caught after the Taoyuan local authorities contacted Kinmen police. This individual will be fined 300,000 NT.

Chen stated that time will be needed to determine whether the situation is stable again, stating a clearer assessment of the clusters that broke out in the two weeks requires observation of conditions until February 10th. It is less of an issue when COVID clusters break out among small groups or companies, rather than among crowded conditions, as with migrant workers in electronics factories or at ports. The governments of both Kaohsiung and Taoyuan take the view that clusters there are declining and mostly under control.

Chen defended the use of blood and sewage testing as showing comparatively few undetected COVID-19 cases, with some suggesting that testing would not pick up new variants. Some testing has begun on outlying islands of Taiwan, to monitor for COVID-19. Omicron cases are still relatively low in Taiwan, with Taiwan having only seen 100 domestic cases and around 400 imported cases so far. The rate of infection is 0.18% in Taiwan currently, making Taiwan the fourth lowest in the world, after Vanuatu, Hong Kong, and China. 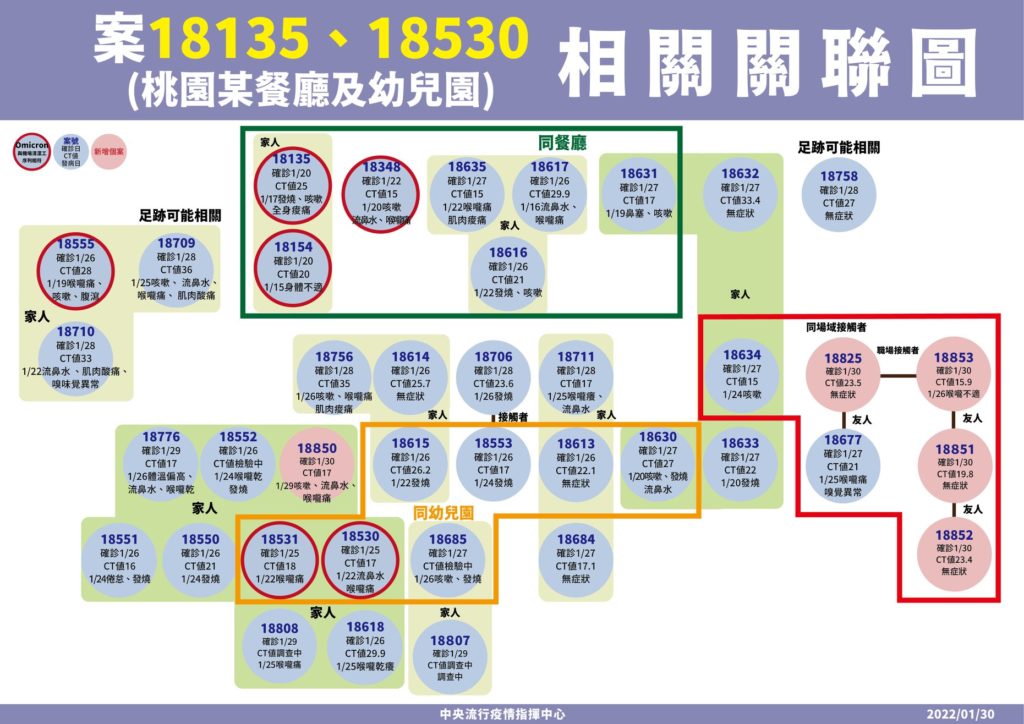 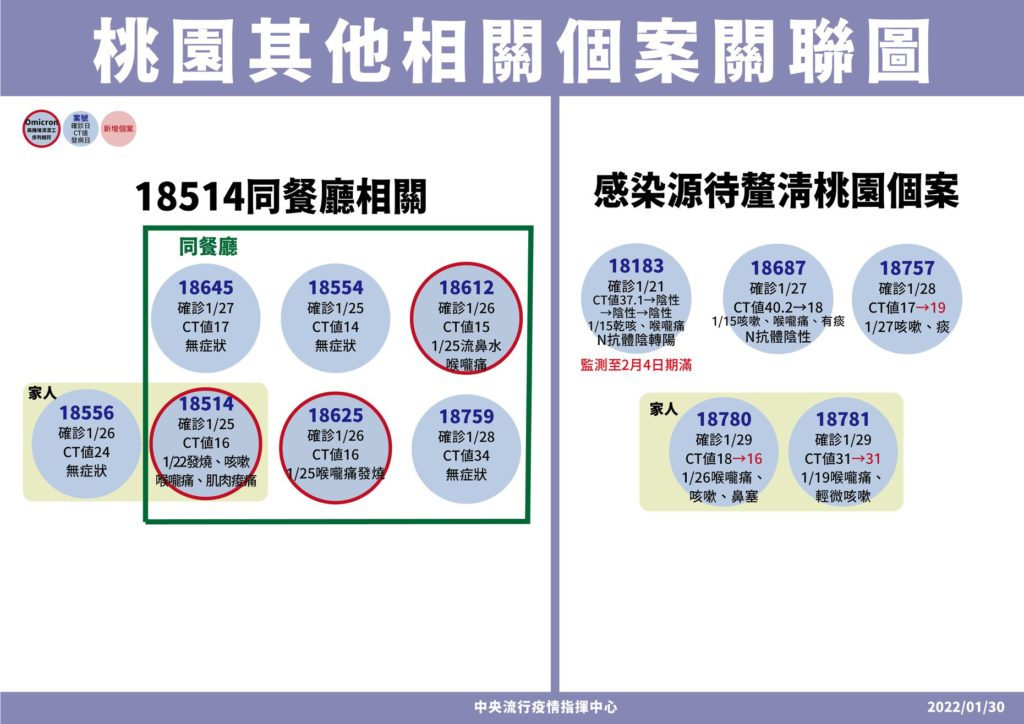 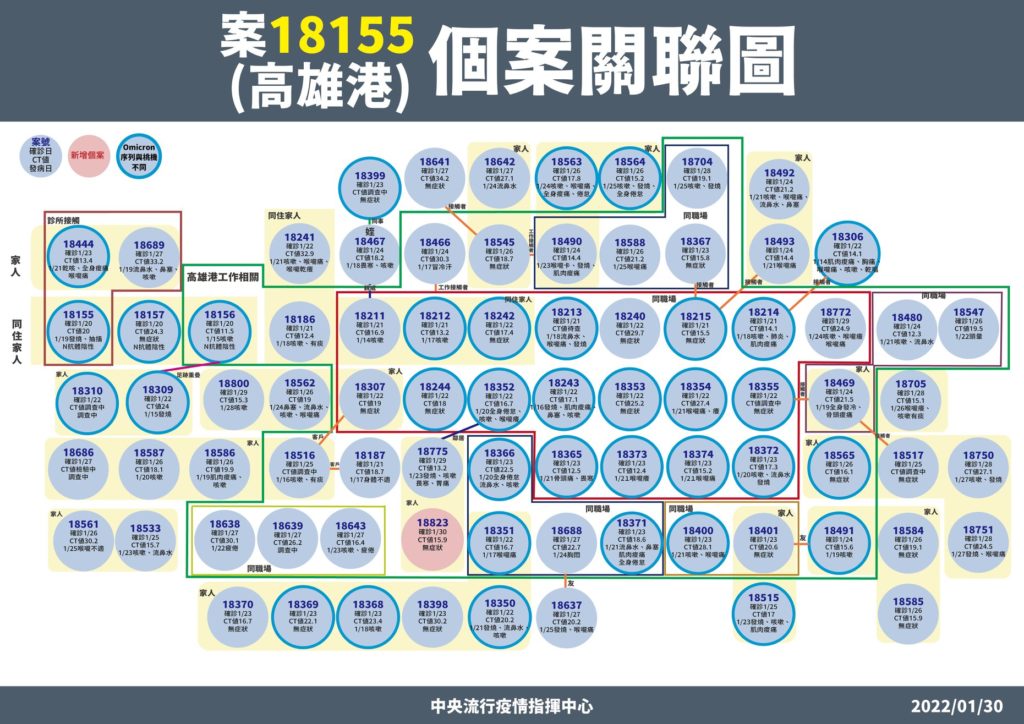 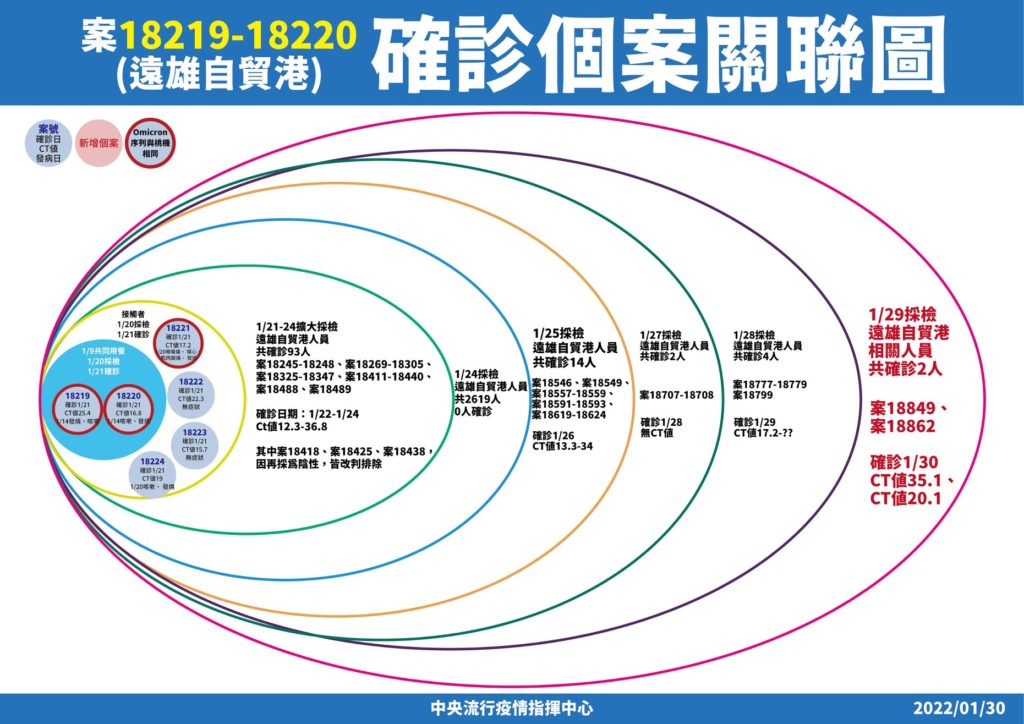 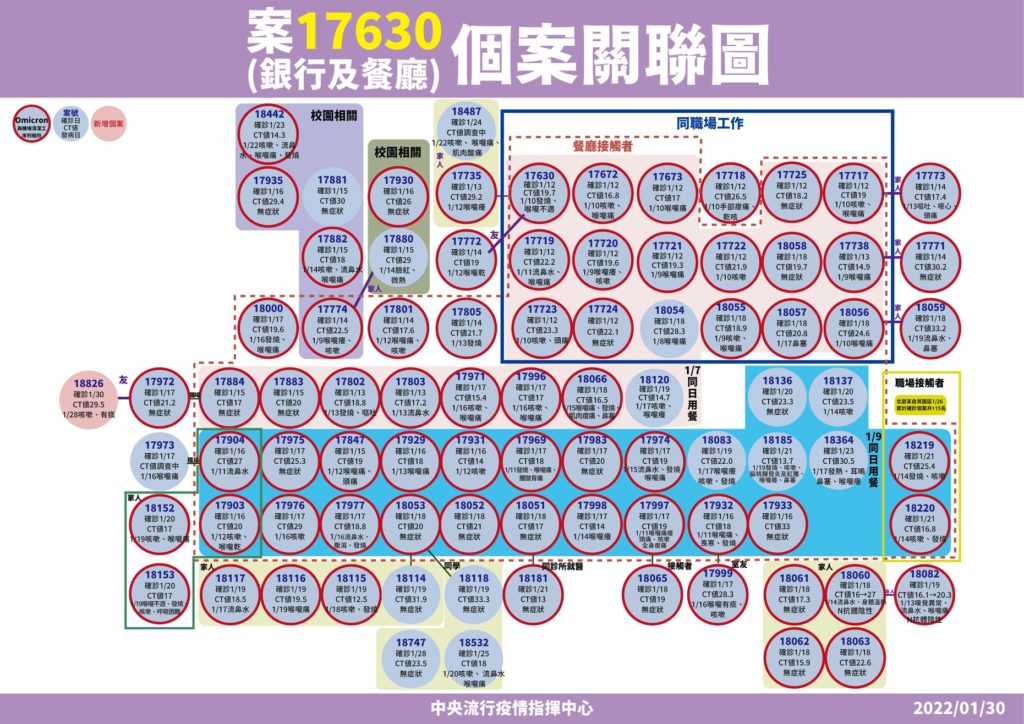 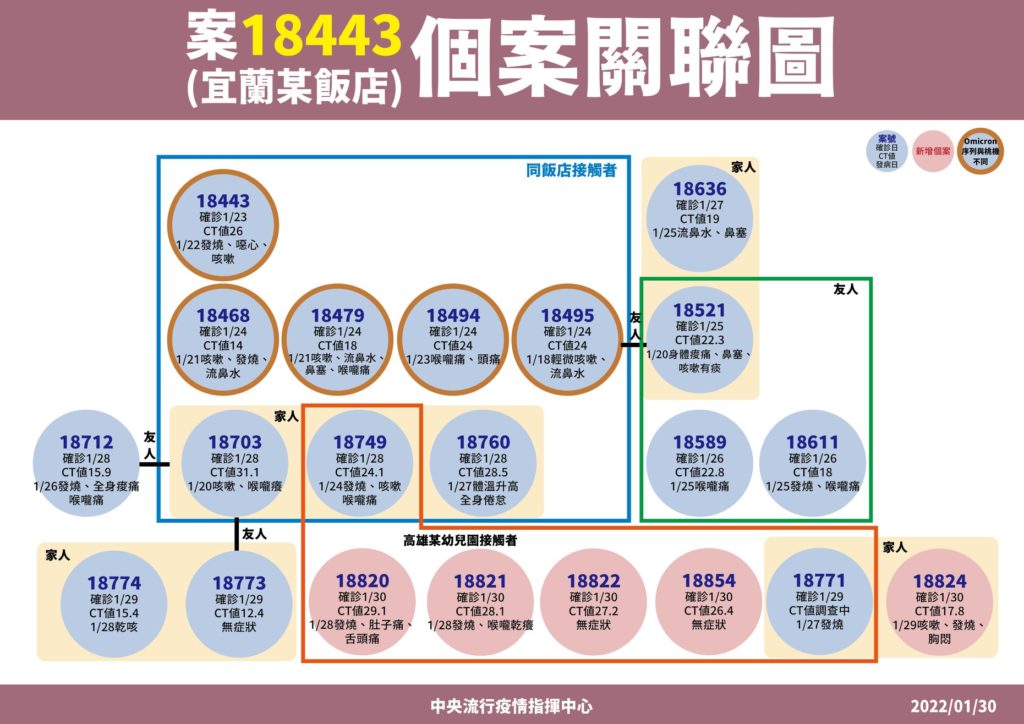 Chen also defended Taipei’s decision to list contacts in the same area as a confirmed COVID-19 case within thirty minutes, even if they appear to have been there before the COVID-19 case arrived. Namely, Chen stated that individuals may not recognize the individual they were in contact with, or may be mistaken on what time they were there. Chen emphasized the expertise of contact tracers, stating that they would not arbitrarily list cases, but took into account factors such as the environment, distance, and etc.

As of 4 PM yesterday, 7,332 were in quarantine, while 17,725 are in home quarantine. A large number of people will be released before the Lunar New Year.