13 DOMESTIC CASES, 25 imported cases, and zero deaths were reported by the Central Epidemic Command Center (CECC) today. This represents a second consecutive day in which there were around a dozen or so cases, following 82 domestic cases reported on January 22nd, and 52 domestic cases reported on January 23rd, after the development of clusters among migrant workers in the Farglory Free Trade Zone (FTZ) in Taoyuan.

Minister of Health and Welfare Chen Shih-chung stated that 2,619 individuals in the vicinity of the Farglory FTZ were tested, but none proved positive for COVID-19. 11 testing stations in Taoyuan also found no new cases. Although the CECC stated that the lower number of cases yesterday could have been due to lower testing, today’s result may reassure that the situation is under control. Yet Chen seemed to indicate that he expected further cases to be found tomorrow and in subsequent days, with second-round testing among individuals in quarantine. Chen also called on more individuals in the vicinity of the Farglory FTZ or Port of Kaohsiung to get tested, stating that this was too few people at present. 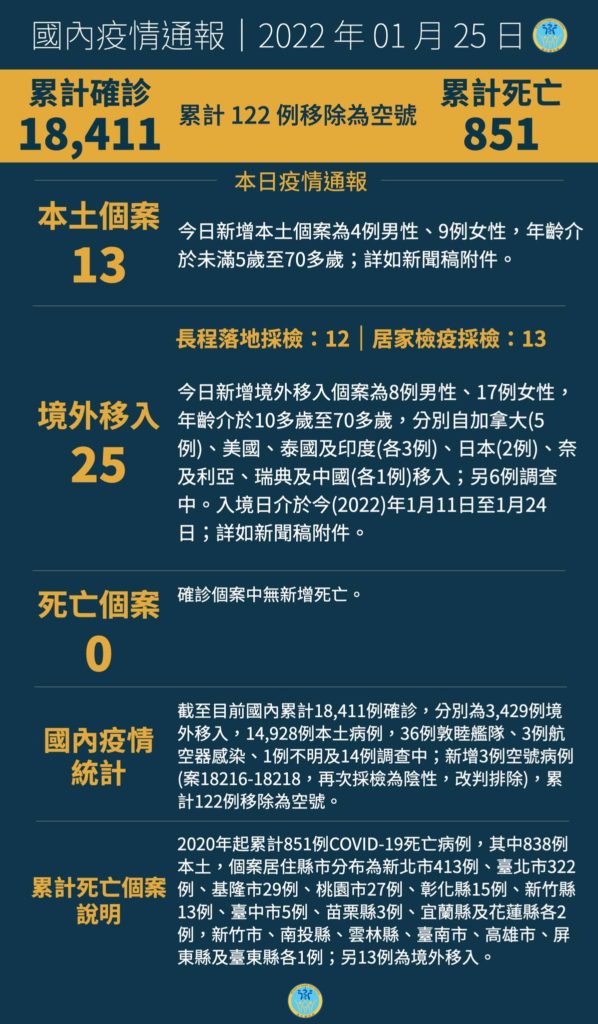 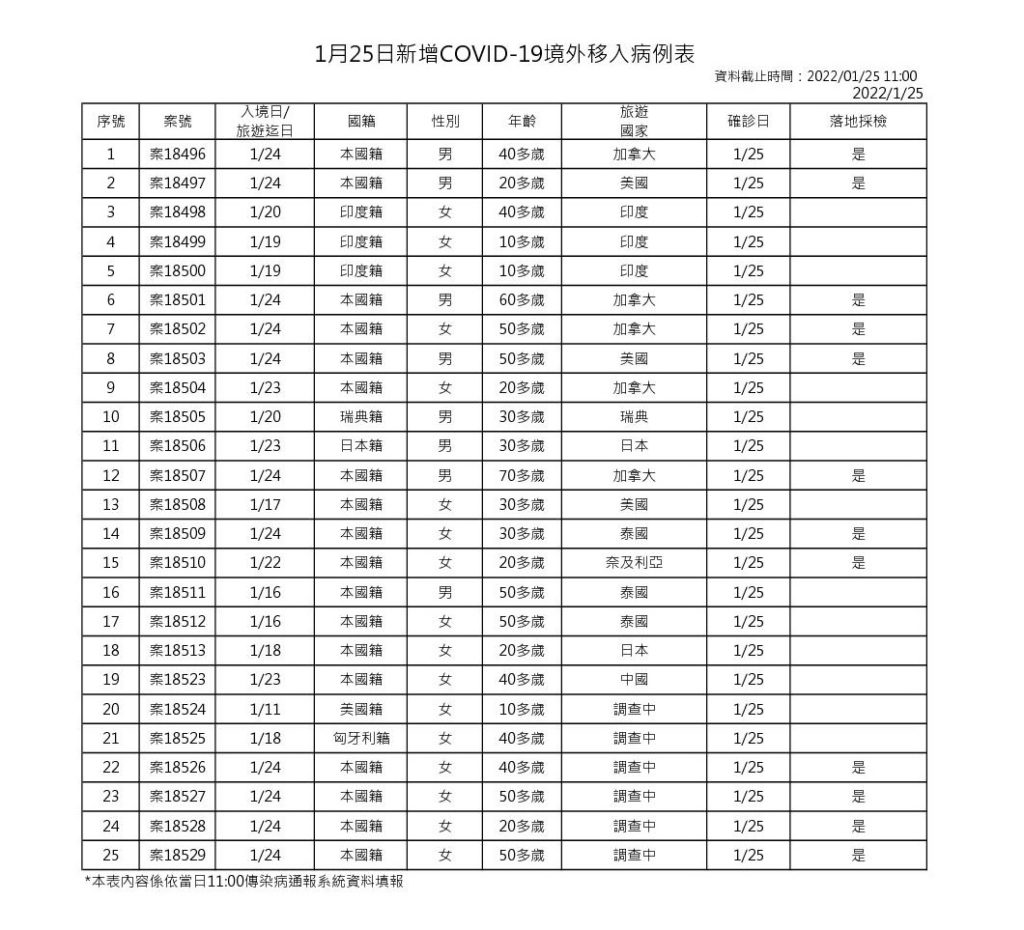 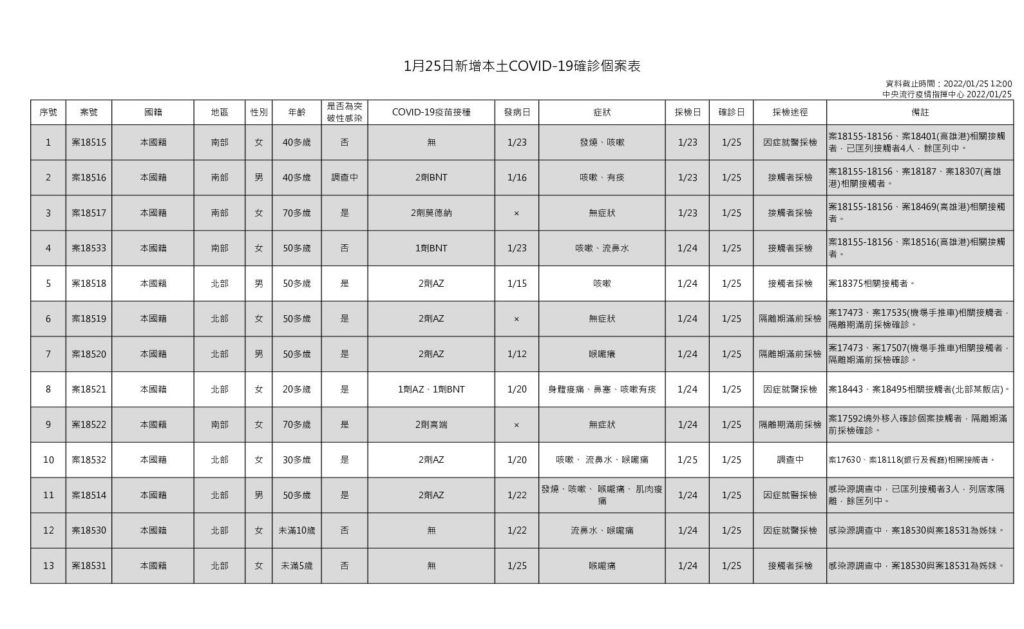 Information on the cases from today. Photo credit: Ministry of Health and Welfare/Facebook

Four cases were found in connection to the Port of Kaohsiung today, though one case resides in Tainan. Six cases were found in Taoyuan, including the parent of a previous case, among two sisters, and a case in Longtan, and two individuals that became infected through contact with service workers at Taoyuan International Airport, and of a grandmother who became infected taking care of their grandchild that returned from abroad infected with COVID-19. Another case has been added in Yilan to the cluster that began with a hotel worker in Jiaoxi, and of a Taipei real estate agent found to have COVID-19, and concern about this individual infecting clients.

According to Kaohsiung mayor Chen Chi-mai, the Port of Kaohsiung cases are now thought to be the result of an imported case that infected individuals in Taiwan. The Kaohsiung city government will widen testing to try and detect the third wave of infections in the community and cut off transmission between the third and second waves through quarantines. Individuals that receive a text warning in Kaohsiung will be required to undergo testing.

Four of the thirteen domestic cases from today were found in quarantine, so are thought to have less impact on the community. Of the remaining nine, then, four were in the Port of Kaohsiung, three in Taoyuan, one in Yilan, and one in Taipei,

All non-essential travel to Palau has been suspended, due to the explosion of cases there.

Kinmen, Penghu, and Mazu have requested COVID antivirals, which the CECC has stated it will distribute to them. Namely, even if there are currently no cases there, distributing COVID antivirals there ahead of time can save on time if there are. The CECC will discuss with experts about the call from Kinmen, Penghu, and Mazu for rapid testing to be set up at airports for travel to outlying islands.

Of the 216 PCR testing stations nationwide, 187 will continue to operate self-paid testing during the Lunar New Year, which is 87% of testing stations. This can assist taishang returning to Taiwan for the holidays, as well as individuals who need to travel abroad. 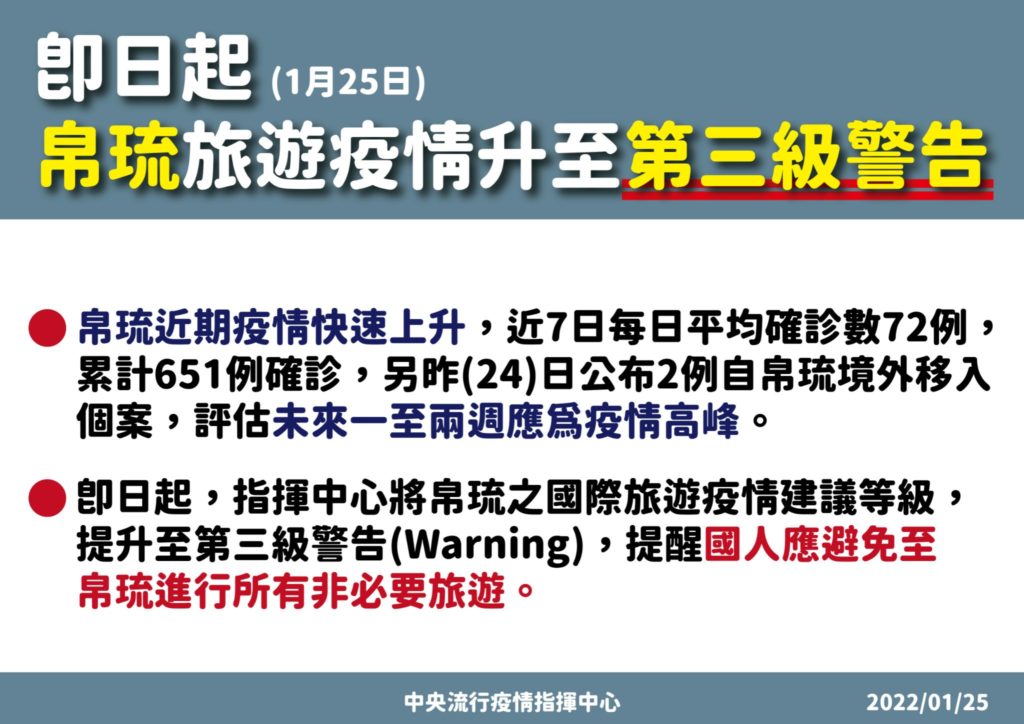 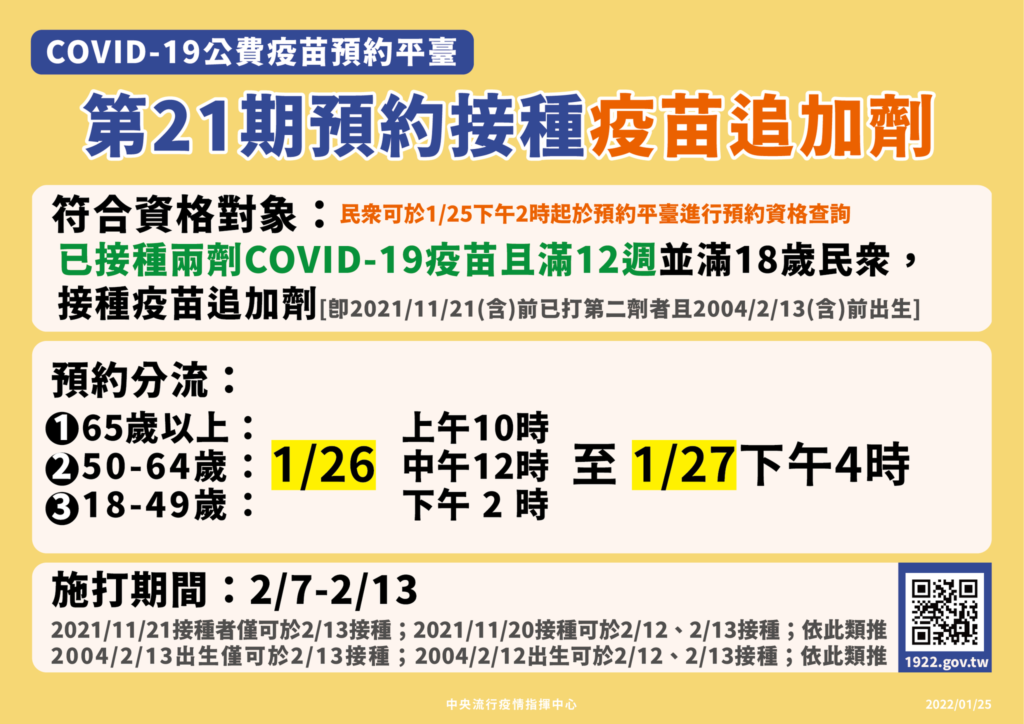 Information on the suspension of non-essential travel to Palau (left) and on the upcoming round of booster shots (right). Photo credit: Ministry of Health and Welfare/Facebook

After calls from the Kaohsiung city government on people not to add “+1” or “+2” after COVID QR code contact tracing text messages to indicate that they were with multiple people, the CECC stated that it would not create data errors if it did this, though this might result from spreadsheet errors. However, the CECC stated that it was preferred that individuals send text messages for themselves for QR code contact tracing.

More specific measures for the Lunar New Year will be issued by the CECC in the next two days. Current regulations will last until February 7th. To this extent, Chen Shih-chung emphasized today that the CECC was still aiming for a COVID-zero approach.