Code Pink Webinar With Carl Zha on Taiwanese Skips Most of the Last Century, Has No Taiwanese Speakers

ANTI-WAR ORGANIZATIONS Code Pink and Massachusetts Peace Action held a webinar on the possibility of war in the Taiwan Straits late last month, featuring Chinese podcaster Carl Zha and Madison Tang from Code Pink. The event proved a striking example of the sort of discussion of Taiwan one gets from elements of the anti-war left when they speak over Taiwanese voices, with neither Zha nor Tang being Taiwanese. Zha was the main speaker, with Tang moderating.

Zha’s framing of Taiwanese history proved rather ludicrous, with Zha first claiming that his gloss on Taiwanese history would be more nuanced than a recent John Oliver segment on Taiwan. Probably acting on some sense of jealousy, Zha seemed to be anxious about the segment throughout the event, referring to it numerous times.

Video of the event

In line with Zha’s blood and soil Chinese nationalism, it may not be surprising that Zha’s gloss on Taiwanese history was one of Indigenous erasure. Zha largely passed over Taiwan’s Indigenous history, claiming that Taiwanese Indigenous originated from the Chinese mainland, and beginning his discussion of antiquity with dynastic Chinese expeditions sent to Taiwan in 230 AD. One notes how western colonial powers also justified their displacement of Indigenous through territorial claims from expeditions; no different from Zha, then.

Zha then spent around five minutes of his hour-long webinar discussing Ming dynasty warlord Koxinga, with regards to Koxinga’s battles with western colonial powers. Koxinga is, of course, remembered as something of a Columbus figure by Taiwanese Indigenous and he is one that successive colonial regimes in Taiwan have used to justify Chinese territorial claims over Taiwan. No surprise that Zha seemed particularly fixated on this.

Of course, one wonders why a webinar supposed to inform of tensions over the Cold War spent close to 10% of its length discussing a warlord who lived from 1624 to 1662, except for the aspiration to claim Taiwan as part of China. Zha otherwise claimed that the Qing dynasty’s lack of interest in Taiwan was due to its bureaucratic nature, rather than that they did not find it to be particularly important and only incorporated it into its territory late during Qing rule. Zha framed the short-lived Republic of Formosa as a Qing loyalist polity again out of his desire to claim Taiwan as having always been part of China, though one wonders why Zha does this when he otherwise justifies territorial claims by the precise political forces that overthrew the Qing dynasty.

Zha then skipped over the Japanese colonial period, except in the broadest of terms, to jump forward to the period of KMT rule over Taiwan. This seems a tactic aimed at minimizing the effects of the Japanese colonial period—close to half of Taiwan’s modern history—on Taiwan. Likewise, seeing as Zha also did not discuss any of Taiwan’s contemporary history in the last thirty years, this seems to be a rhetorical strategy aimed at depicting Taiwan as though it were still the society ruled by Chiang Kai-shek—a right-wing regime propped up by the US in order to counter China. Zha likely did not want to discuss Taiwanese democratization or the fact that Taiwan’s current ruling party is one that emerged out of the democracy movement in opposition to the KMT to avoid messy questions such as why he believes that Taiwanese democracy should be sacrificed in favor of Chinese rule–on the basis of blood-and-soil claims about territorial integrity, no less. 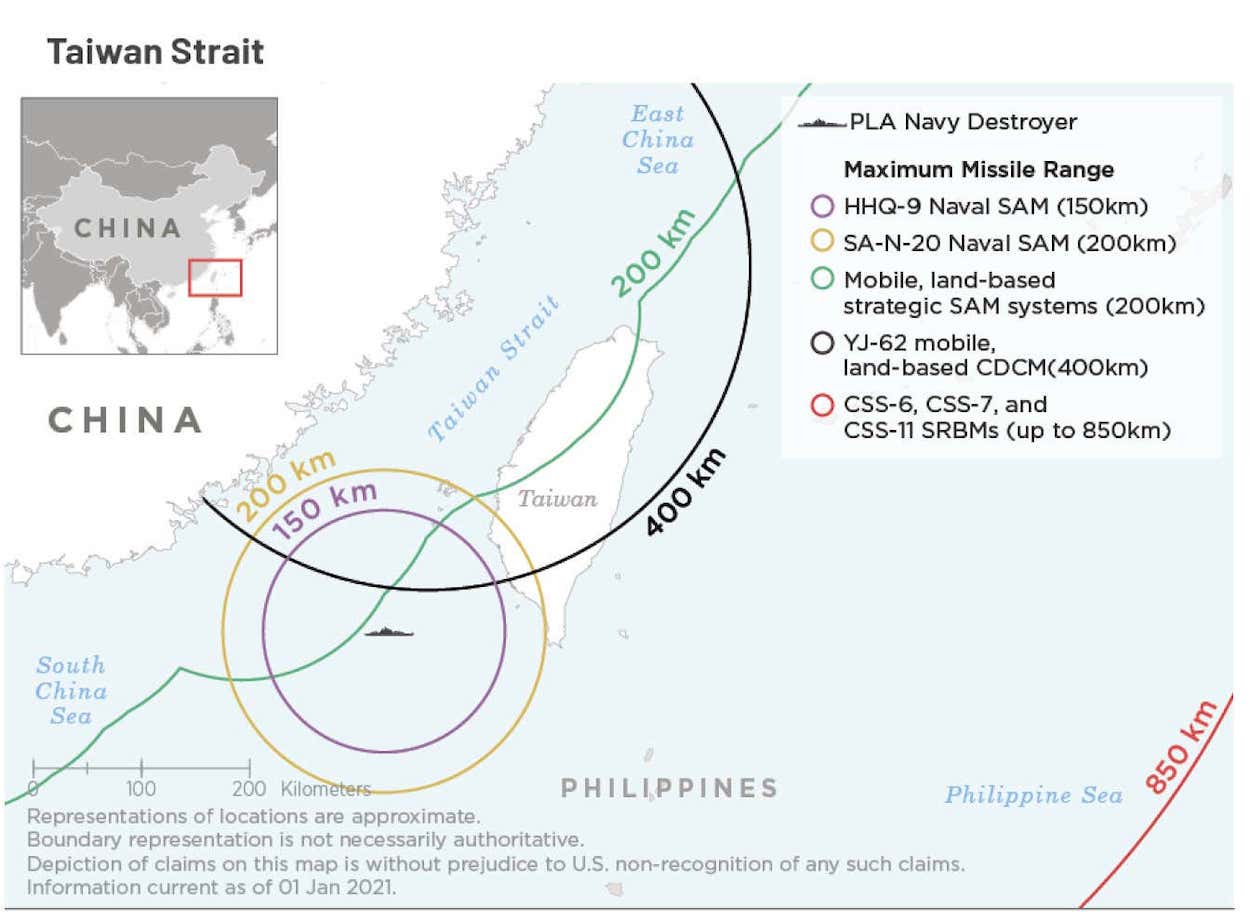 Map showing the range of Chinese missiles. Photo credit: US Department of Defense

In discussing contemporary political tensions over Taiwan, then, Zha claimed that Taiwan was inflating Chinese air incursions directed against it, seeing as Taiwan’s Air Defense Identification Zone (ADIZ) extends over China. This is a widely circulated disinformation claim, as Taiwan does not report on Chinese planes flying over the part of its ADIZ in China. Similarly, Zha claimed that Chinese warplanes did not, in fact, encroach anywhere near Taiwan—never mind that Zha did not point out exactly what distances are militarily significant for air incursions or what distance that warplanes can hit targets from. One notes, after all, China can hit targets in Taiwan from the Chinese mainland, it is a very basic fact that military threats can take place at a distance.

Despite the fact that the US and China are, in fact, rather far from nuclear war over Taiwan, Zha tried to frame the US as always willing to resort to nuclear arms over Taiwan. In this, Zha drew upon historical documents of when the US suggested it might be willing to use nuclear weapons against China over Taiwan.

At the same time, what Zha did not discuss is how the US and Chinese economies are interlinked today, with Taiwan proving a critical point of intersection. It would be deeply against the interests of either going to nuclear war over Taiwan—or this is at least a deterrent to nuclear war taking place so easily.

Otherwise, some of Zha’s claims about Taiwan or China were plainly wrong. Zha claimed that, unlike in China, where linguistic diversity is respected, the KMT sought to eradicate Taiwanese Hokkien. This is not the case at all, with China attempting to stamp out non-Mandarin dialectics in order to enforce Mandarin uniformity today.

Amusingly, Zha did discuss how mainlanders that came over the KMT from China were seen as outsiders, but passed over how this suggests that Taiwanese viewed themselves as different from Chinese. When Taiwanese Indigenous came up, Zha claimed that they voted primarily for the KMT because they viewed the KMT as treating them better, passing over decades of violent suppression of Indigenous by the KMT. Indigenous voting for the KMT is often because of continued fear of retaliation, decades into democratization.

Zha also claimed somewhat strangely that the democracy movement against the KMT was oriented towards Taiwanese independence, when identity splits between independence versus unification lines opened up quite late, and pro-independence and pro-unification forces in fact worked with each to resist the KMT during authoritarian times. It was ironic that Zha’s historical erasure included that of those whose political views are more similar to himself, then. Another strange claim by Zha was that land reform in Taiwan took place because of Chiang Ching-kuo’s education by the Soviet Union, touting his apparent friendship with Deng Xiaoping, and crediting Taiwan’s democratization to this indirect Soviet influence.

To this extent, it may not be surprising that Zha dismissed Chinese threats against Taiwan, claiming that life goes on in Taiwan normally as proof that they are not real—never mind that this is because Taiwanese have grown inured to decades of Chinese military threats.

Yet Zha can simply go to Weibo if he wants to find examples of nationalistic Chinese netizens threatening to wipe out Taiwan’s inhabitants to simply take the land. Zha also took at face value claims by Chinese president Xi Jinping that China did not threaten military force against Taiwan, never mind when exactly leftists should take seriously claims by national leaders? And Xi’s comments are simply a case of “Speak softly and carry a big stick,” as is often the case with imperialists. 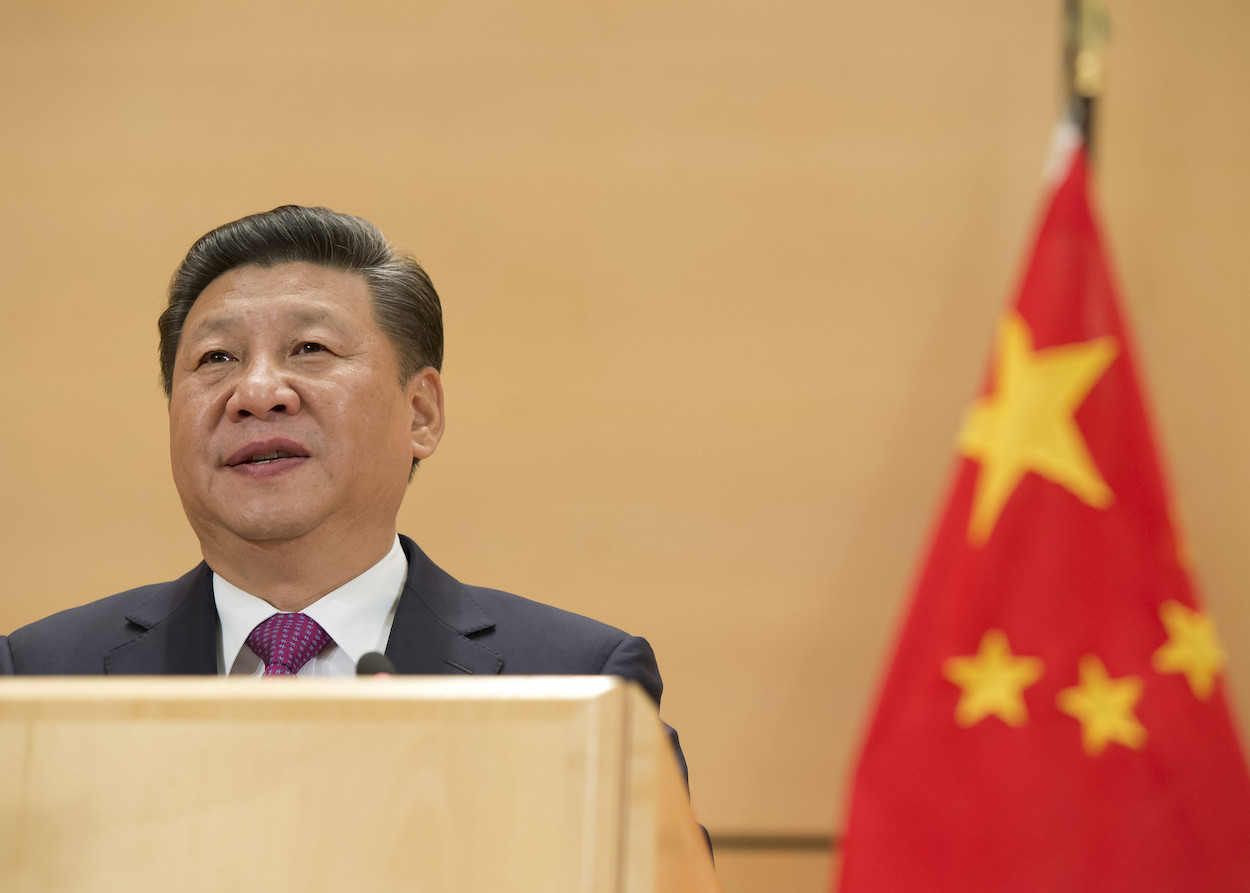 Likewise, one notes that much of Zha and Tang’s comments simply returned to the US, pointing to tweets by Tsai at former US President Donald Trump to suggest the affiliation of Taiwan with the right-wing—never mind that this reflects Taiwan’s having few options except to align with the US–regardless of administration–in order to counter China. Ironically, Zha sometimes pointed at this indirectly with claims that Taiwan was obligated to continually purchase US arms in return for security assurances. Moreover, Zha and Tang both claimed that the US could have national healthcare, better infrastructure, and etc., if not for the money that the US spends on arms sales with Taiwan–and yet Taiwan pays the US for the arms it is obligated to buy from it, this is not a free gift.

When asked about what he viewed as a solution to such issues, Zha stated that he hoped that the situation could go back to something similar to 2010. Of course, that was before Chinese president Xi Jinping took power, and with Xi consolidating power in preparation for an unprecedented third term in office, this is not likely to happen anytime soon.

Despite the ludicrousness of the event with Zha and Tang, it would not be surprising if such logic continues to take root among the US anti-war movement. The US left is, if anything, profoundly insular, and it has a tendency to romanticize any forces opposed to the US, such as China. Those caught between the US and China, then, will be spoken over and thrown under the bus by such self-proclaimed leftists with scarcely any thought.