Autumn Struggle Co-Opted Again by the KMT in 2021

That being said, Autumn Struggle has taken a strange turn in the past few years, with accusations that the event has been co-opted by the KMT. For one, Autumn Struggle was not held in the lead-up to 2020 elections in 2019, apparently due to internal disputes about what stance should be taken vis-a-vis the DPP and KMT.

Then, in 2020, Autumn Struggle saw mass participation by KMT members, primarily deep Blue individuals who had been supporters of Han Kuo-yu during the 2020 elections. Instead of focusing on a labor demand, Autumn Struggle switched its focus to that of US pork imports. 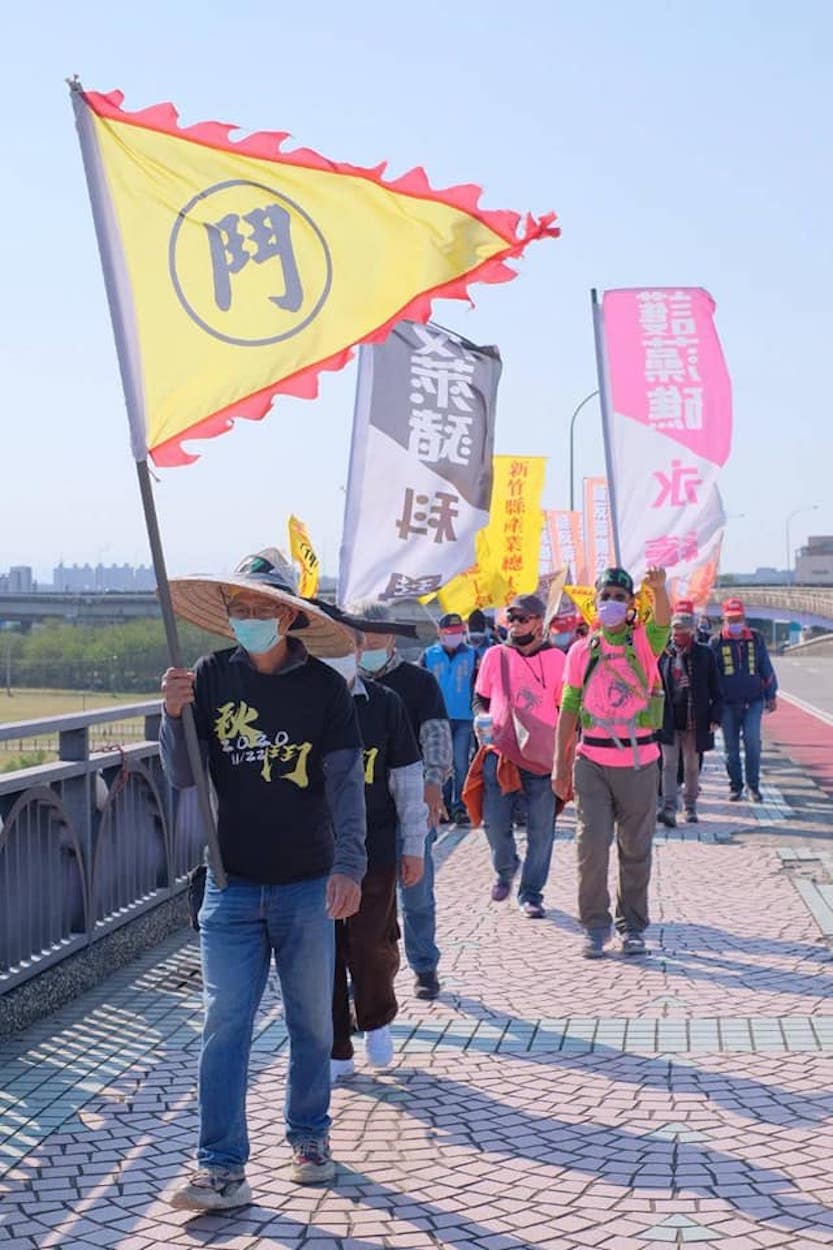 Likewise, the event’s 2020 iteration saw the participation of KMT politicians including then-KMT chair Johnny Chiang, former President Ma Ying-jeou, Eric Chu, who is now KMT chair, and others. Organizers claimed that the main protest stage was still separate from the stage used by KMT politicians, with Autumn Struggle historically having kept a distance from both of the two major political parties in Taiwan.

Nevertheless, what was clear was that the event was flooded with KMT supporters and members of the pan-Blue camp. Although Autumn Struggle had seen declining attendance in the second term of the Tsai administration, pan-Blue media trumpeted the event as the largest iteration of Autumn Struggle in history, with over 50,000 in attendance.

Though Taiwanese farmers have long warned of the possibility that the domestic pork industry could be decimated by the entrance of US pork and opposition to US pork imports could be articulated as a left-wing demand in this way, this was not what the protest focused on. Instead, on saw more general pan-Blue political claims, with many demonstrators carrying placards of political persecution over CtiTV’s loss of its broadcast rights and its shift to livestreaming.

Once again, KMT politicians including Eric Chu, Johnny Chiang, and Ma Ying-jeou again made appearances. Members of Ko Wen-je’s Taiwan People’s Party, which can also be viewed as a pan-Blue political party, were also present including legislators Tsai Pi-ru and Chiu Chen-yuan. Chu Tien-wen, best known as the scriptwriter for many of Hou Hsiao-hsien’s films, was also present, making a speech accusing the DPP of dictatorship.

Indeed, as with the 2021 Autumn Struggle, the demands of the protest were not focused on labor, per se. Instead, they mainly adapted the KMT’s political platforms on the issues to be voted on in the national referendum including opposition to the DPP’s plans to construct a liquified natural gas (LNG) terminal off of the coast of Taoyuan, as well as continued opposition to US pork imports.

Likewise, another one of Autumn Struggle’s demands was opposing the use of cyber-armies. In past years, the KMT has sought to claim that the DPP, which has had greater success conducting outreach among young people using the Internet and social media, uses a “cyber-army” to attack political opponents. This would also be the KMT’s attempt to deflect accusations that it is aided by disinformation from China, in accusing the DPP of itself engaging in disinformation efforts. 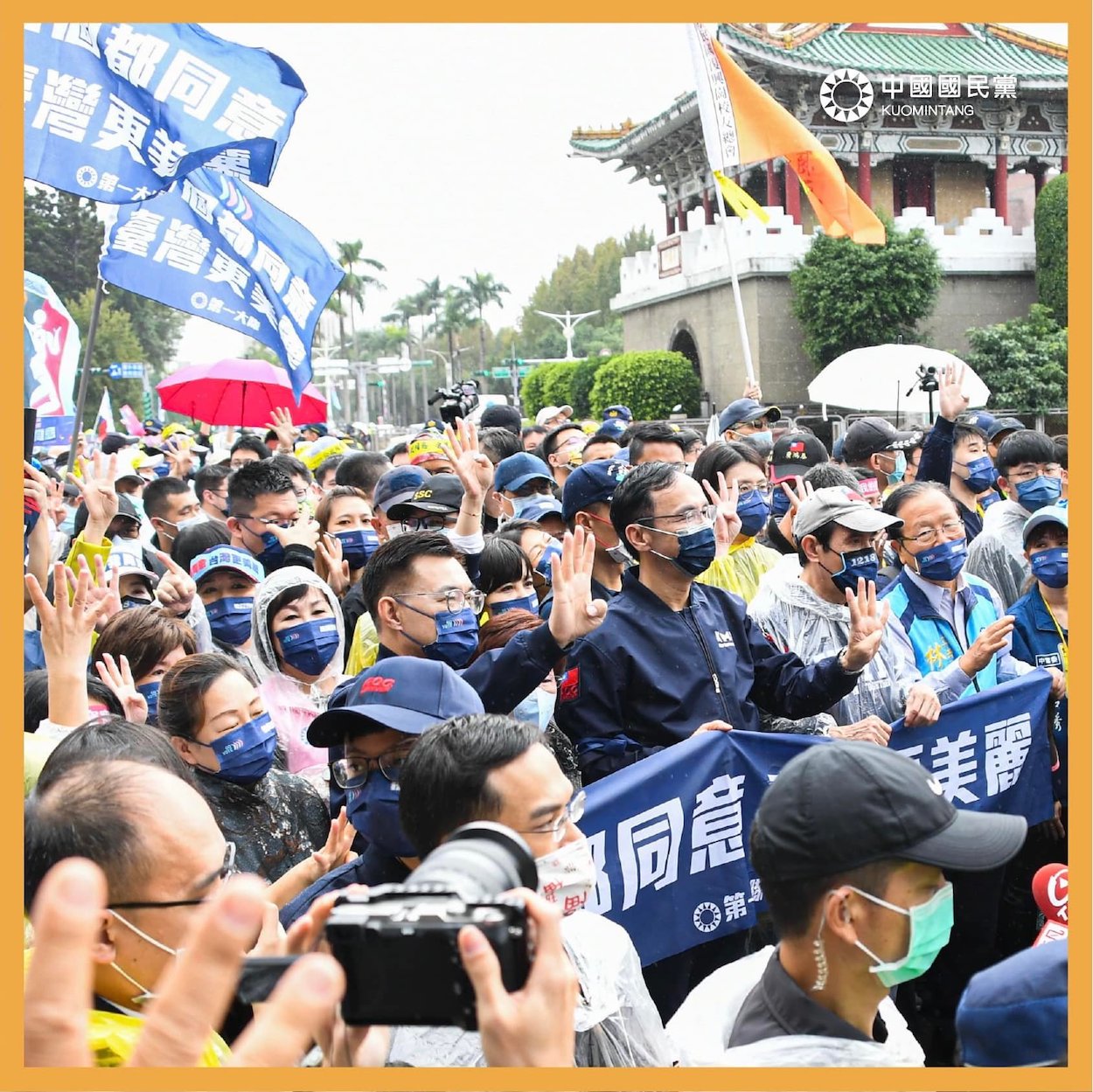 The KMT’s co-optation of Autumn Struggle in the past two years, as well as its co-optation of the movement against the LNG terminal in Datan and protests against US pork imports, shows that the KMT is still able to capture some elements of civil society. Ironically, it is the KMT that has historically put down efforts at labor organizing in Taiwan during the authoritarian period, the LNG terminal was originally proposed by the KMT, and it was the Ma administration that first wished to lift barriers on the import of US pork into Taiwan. Yet with the KMT now serving as the opposition and the DPP as the ruling party, the two parties have now switched positions.

More generally, with independence versus unification having long been the most significant political split in Taiwanese politics, it has proved difficult to push for a left politics that is not simply hostage to the split between unification versus independence politics. The fate of Autumn Struggle proves another case in point. But to this extent, the future of left-wing labor organizing in Taiwan remains unclear. The co-optation of Autumn Struggle by the KMT illustrates the drift of the pro-unification left towards uncritical support for the KMT in past years, as well as the pro-unification left’s influence in the labor movement.