Trigger warning: This article contains a brief section recounting recent mobilizations against trans rights that some readers might find distressing. This section will be marked off with a line of asterisks, such as follows.

A VARIETY of events happened this past week with regards to the ongoing struggle for transgender rights in Taiwan, including Taiwan’s first successful legal gender change without submitting proof of surgery, Lisbeth Wu’s second preliminary proceedings, and the Taiwan Alliance to Promote Civil Partnership Rights’ (TAPCPR) second Transgender Film Festival. These gains for transgender rights have not gone unchallenged though, as the past two months have also included increasing opposition. 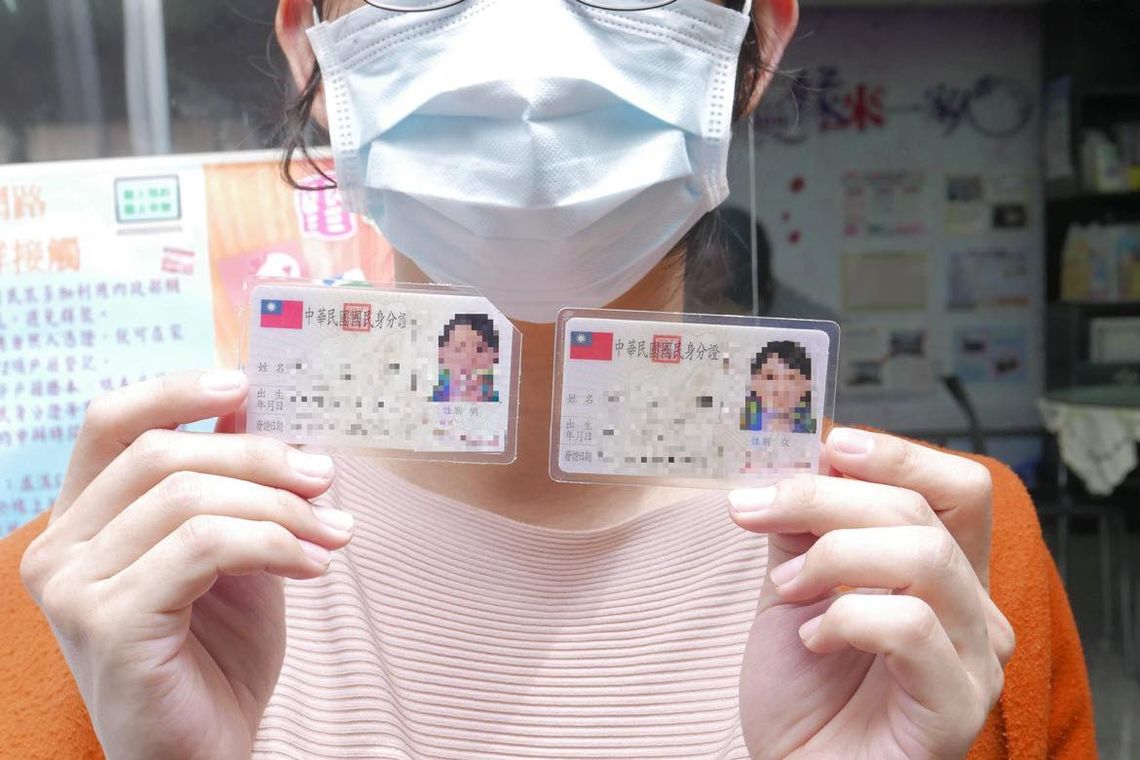 The September 23rd ruling deemed unconstitutional the current Ministry of Interior executive order (內政部97年11月3日內授中戶字第0970066240號令) requiring proof of having surgically removed specified reproductive organs—penis and testicles for transgender women; breasts, uterus, and ovaries for transgender men—in order to legally change one’s gender. Further, the court exercised its authority to order the Daxi Household Registration Office to accept and process Xiao E’s legal gender change. TAPCPR reemphasized in a press release on Friday that the ruling “is only legally effective for Xiao E and does not extend to other cases.” Should the Ministry of Interior refuse to amend their executive order on legal gender change requirements , the only way for other transgender people to change their legal gender is to successfuly undergo the same litigation process as Xiao E.

Earlier this week on Tuesday (11/16), TAPCPR held a press conference for Lisbeth Wu featuring Wu’s grandfather, mother, and father outside of the Taipei High Administrative Court before Wu’s second preliminary proceeding. Wu is a US-Taiwan dual citizen who has already changed her legal gender on her US passport without submitting proof of surgery, but has yet to successfully change her legal gender here in Taiwan. During Transgender Day of Remembrance last year on November 20th, TAPCPR accompanied Wu to the Taipei City Zhongzheng District Household Registration Office where she then applied for a legal gender change without submitting proof of surgery, which was summarily rejected. TAPCPR has since represented Wu in the subsequent administrative appeal process, the first preliminary proceedings of which were held on September 15 of this year. During Tuesday’s press conference, Wu’s family members each expressed their support for Wu. Wu’s mother stated that she “fully supports her child and hopes that other people in [Taiwanese] society will listen to and understand [transgender people].” Wu’s father also emphasized his whole-hearted support, as did Wu’s grandfather. The Taiwan Association for Human Rights and Taiwan Tongzhi Hotline Association also attended the press conference to express their support.

During Tuesday’s second preliminary proceedings, both Wu and Zhongzheng District Household Registration Office agreed to stop the administrative appeal process and allow the Taipei High Administrative Court to exercise its authority to apply for a constitutional interpretation. If the Constitutional Court of the Judicial Yuan accepts to hear the case, and if the Constitutional Court’s final interpretation is in agreement with the Taipei High Administrative Court’s September 23rd ruling that the Ministry of Interior’s executive order on legal gender change requirements is unconstitutional, there is a possibility that the surgery requirement for changing one’s legal gender will be amended, allowing for transgender people across Taiwan to change their legal gender without submitting proof of surgery.

The last two months since the September 23rd ruling on Xiao E’s case has seen a dramatic increase in oppositional discourses challenging legal efforts to abolish the requirement of proof of surgery for changing one’s legal gender. For instance, one proposal on the government-run Public Policy Online Participation Platform (PPOPP) started on October 5th calls for the protection of women and children through banning hormone replacement therapy and gender confirmation surgeries for all people under the age of 16 and requiring that gender-specific spaces such as bathrooms, spas, and changing rooms adhere to a “physiological/biological rule” admitting only cisgendered people and transgender people who have undergone complete surgical reconstruction or removal of their reproductive organs when determining who is allowed to use these spaces. This proposal also cites the possibility of transwomen stalking other women into restrooms and other gender segregated spaces such as spas to sexually harass them and threaten their personal safety, as well as the possibility of incarcerated transwomen sexually assaulting and impregnating other inmates if placed in womens’ prisons. At the time of writing, this proposal has received over 3000 cosigns and over 1000 comments in support.

Another PPOPP proposal started on October 13th directly calls for blocking any potential changes to the proof of surgery requirement for changing one’s legal gender in light of the Taipei High Administrative Court’s September 23rd ruling. The proposal cites instances of the sight of a transwoman’s supposedly male genitalia in gender-specific spaces such as a spa causing psychological harm and discomfort to women, as well as the possibility of “biological males” unfairly taking scholarships and subsidies meant for women. This proposal has also received over 3000 cosigns and 1,000 comments in support at the time of writing. One leading comment upvoted by over 200 people at the time of writing states: “I am a biologically male but psychologically female transgender person, but I resolutely and vehemently oppose efforts to change the surgery requirement for changing one’s legal gender. I believe that this world only has two genders, which are biologically male and biologically female.” This comment draws attention to the fact that some transgender people who subscribe to a biologically binarist notion of gender may oppose efforts to change the surgery requirement. 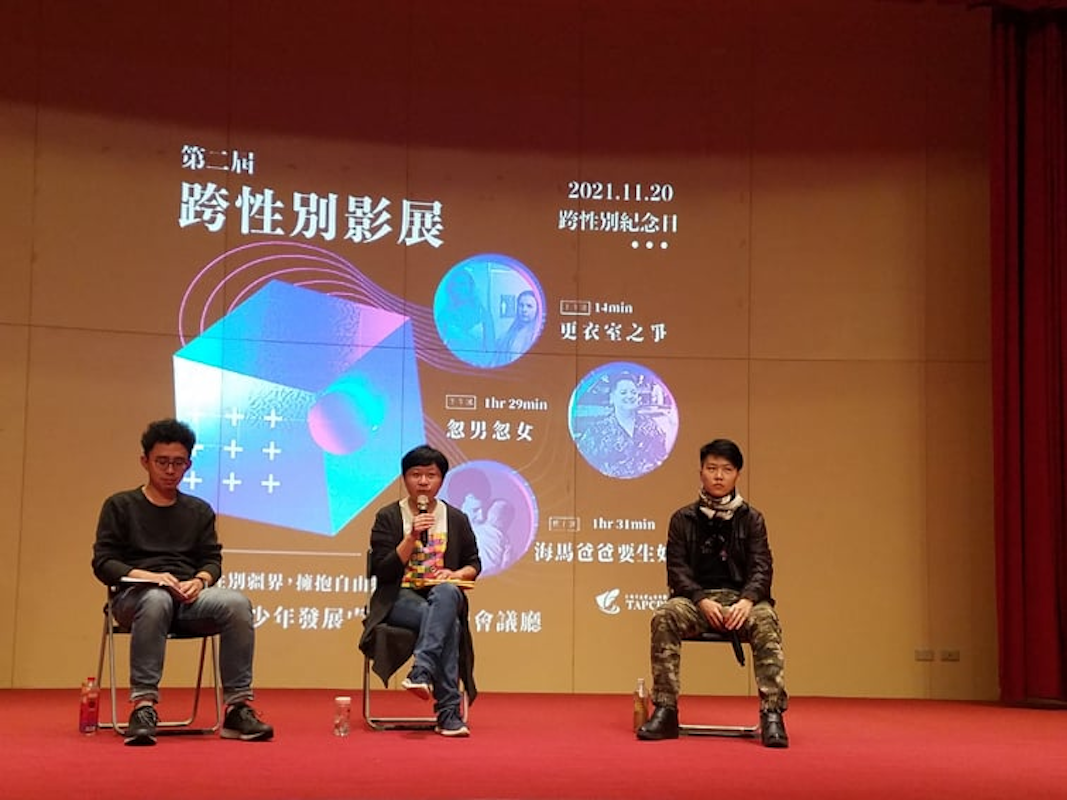 On Saturday (11/20), TAPCPR hosted the second Transgender Film Festival in Taipei. Perhaps in response to the rise in opposition to trans rights described above, TAPCPR specifically screened Marin Håskjold’s What is a Woman? (2020), and Jeanie Finlay’s Seahorse: The Dad Who Gave Birth (2019). Monika Treut’s Gendernauts: A Journey Through Shifting Identities (1999) was also shown.

Håskjold’s short film What is a Woman? entails a staged confrontation between a group of women in the changing room of a pool over whether or not a transgender woman has the right to be there. Various characters within the film represent different positions and talking points around the issue, such as those voiced in the PPOPP proposals above regarding the safety and psychological well-being of women. What Is a Woman? earnestly engages all sides of the issue, but ultimately critiques efforts to ban transwomen from gender-specific spaces. Towards the end of the film, a partially clothed butch-presenting woman sharply responds to another women’s assumption that she has a vagina and therefore has a right to use the changing room by asking: “How do you know?”

The choice to screen Jeanie Finlay’s Seahorse, a documentary accounting Freddie McConnel’s pregnancy, was also apropos, as the current surgery requirement for changing one’s legal gender is effectively tantamount to requiring the sterilization of transgender people. Furthermore, the documentary depicts many scenes of McConnel’s family supporting him throughout his pregnancy, scenes which may have reminded some attendees of the heartfelt support that Lisbeth Wu’s family expressed for her during Tuesday’s press conference. After each screening, various TAPCPR affiliated people facilitated panel discussions in an effort to promote public dialogue on transgender rights.

This Saturday was also Transgender Day of Remembrance this year, which has been described as one of the deadliest years for transgender people worldwide, a stark reminder of how much further there is to go to realizing trans inclusive societies and protecting transgender people and rights globally. Despite a week full of positive steps forward for transgender rights in Taiwan, oppositional forces continue to grow. It remains to be seen whether or not the increased circulation of transphobic discourses these past two months will outpace the current momentum towards changing the surgery requirement for legal gender change.

[1] For the full text of the written verdict, see here.