The Chulalongkorn University Student Union is currently headed by Netiwit Chotiphatphaisal, a student activist who had previously been removed from the Presidency of the Student Council back in 2017. He was re-elected with over 10,000 votes (around 70% of all the votes) in a landslide in March 2021, marking the record of the most votes in the university’s student election. 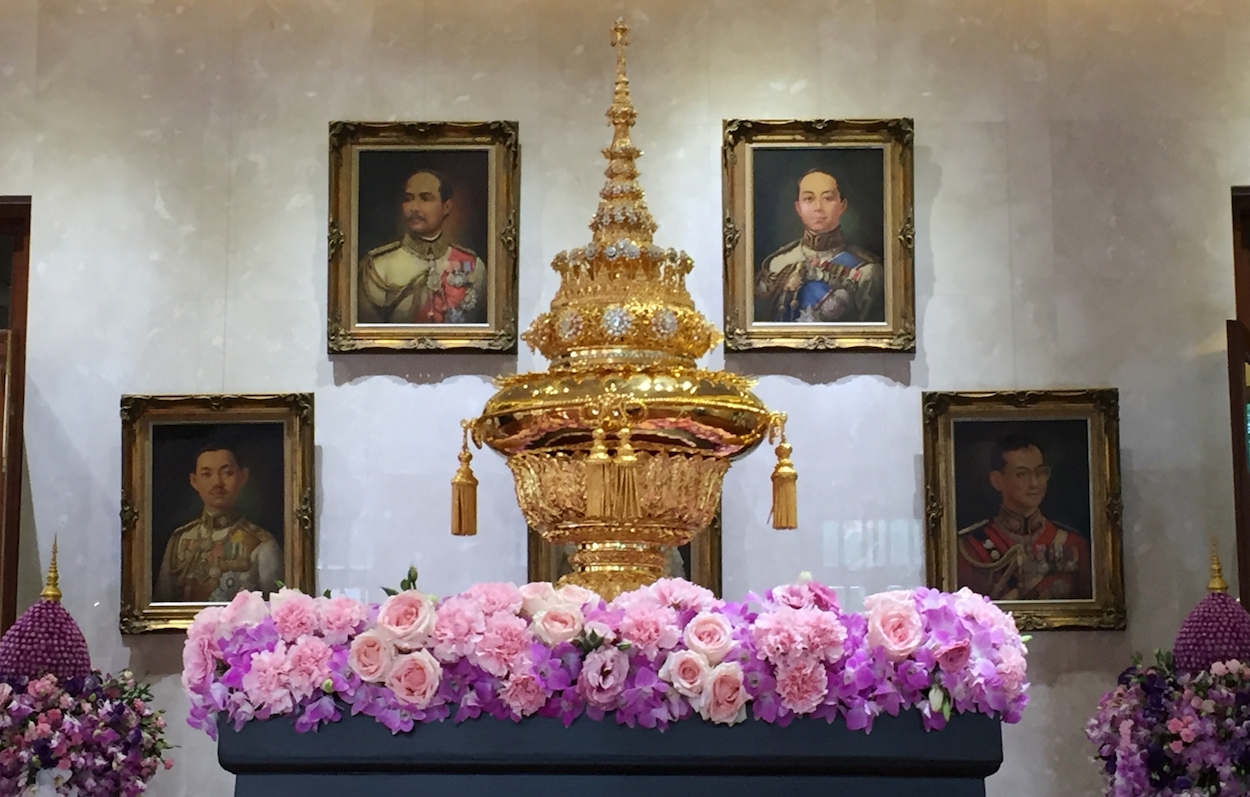 This election shook the conservatives, causing every move of his team to be strictly observed by authorities. The Student Council of Chulalongkorn University, along with the Chulalongkorn Cheer Club also endorsed the statement.

The statement issued by the student union framed the event as the symbol of feudalistic culture and reinforcing social inequality. Likewise, it asserted that because the parade was just 30-year-old, it was an invented tradition. It also raised skepticism regarding the selection of the privileged male and female students seated on the palanquin, carried by roughly 50 male students, who were forced to participate in exchange for eligibility to stay in the university’s dormitory. The statement ended by closing with the phrase, “For the equality of man.”

The Editorial Department of the student union, which is soon going to celebrate its 100th anniversary, also published its magazine on this day in commemoration of King Rama V (King Chulalongkorn). Its content discussed the historical narratives more fairly and humanely. The cover presents King Rama V with the current symbol of the Thai people’s struggle with the military regime, a three-finger gesture. The conservatives saw this as an ominous challenge to the status quo.

On October 24th, Chaiwut Thanakamanusorn, the Minister of Digital Economy and Society in General Prayut Chan-o-cha’s second term, and also alumni of Chulalongkorn University, posted on Facebook stating his opposition to the statement. He claimed that the parade itself embodies the holy presence of both King Rama V and King Rama VI on the football field. 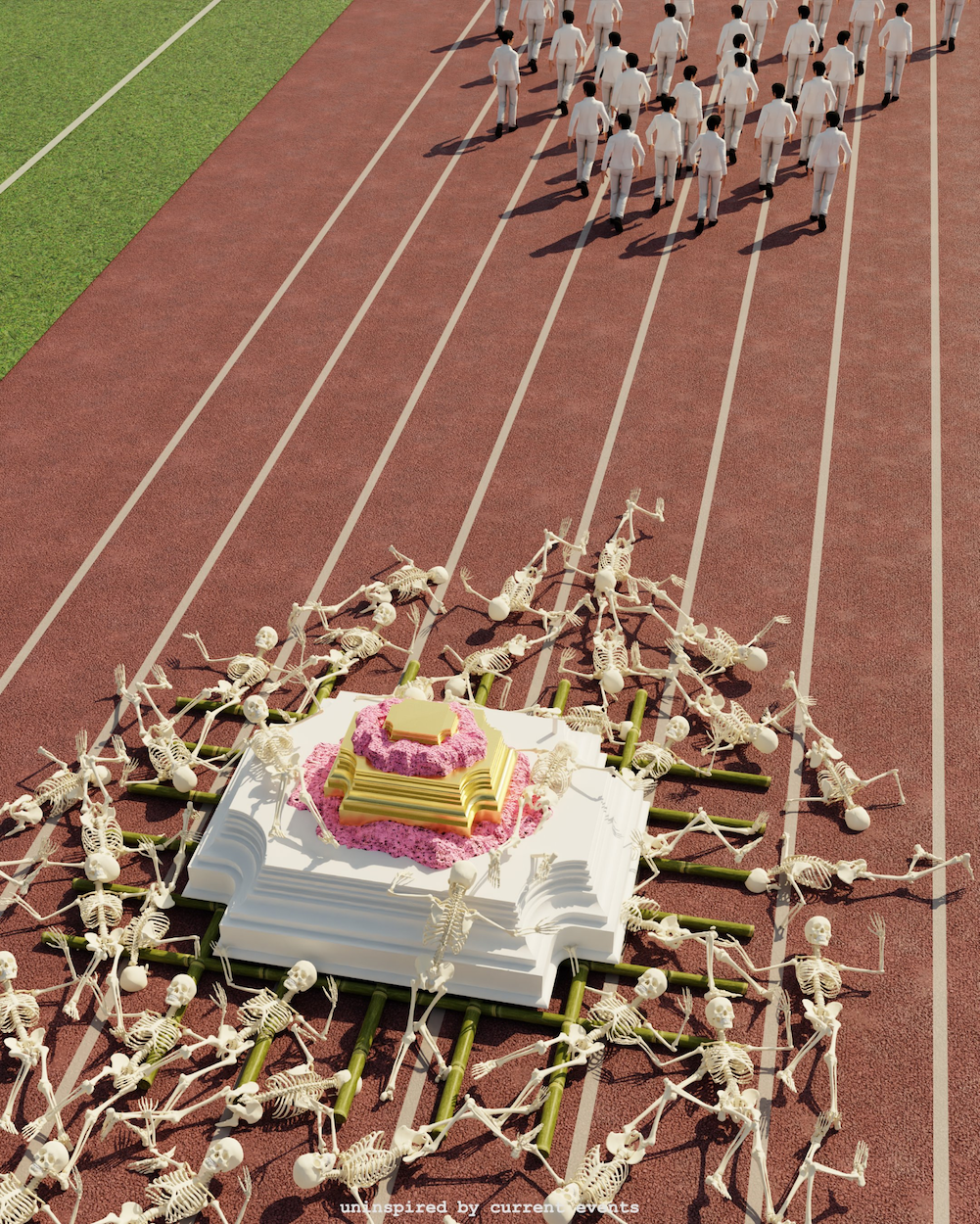 Chaiyabhak Chanwilai, the head of the so-called “Chulalongkorn University Dignity Conservation,” claimed on Facebook that the cancellation of the parade is a grave abomination towards the monarchy. He pressured the university’s administration to punish the members of the student union and affirmed that if no action of punishment is taken, the university’s administration should just be fired.

On October 25th, a news report at the Thai parliament showed Prime Minister, General Prayut, mentioning the Student Union’s resolution. He asked the ministers whether they are alumni of Chulalongkorn University. Chaiwut and another Minister of Culture presented themselves. Prayut then told them to “take a look over that situation.”

The “Chulalongkorn Alumni in the Royal Patronage” also made a statement that the 75th football match, as well as the Phra Kiao Parade, will continue, in contradiction to the students’ resolutions.

On October 26th, ThaiPost News, a reactionary news agency, exposed all the names and photos of the members of the student union. It was headlined, “Exposing the members of the Chulalongkorn Student Union under Netiwit’s manipulation conspiring to destroy Phra Kiao.” It was obvious that they aim to use the phrase ‘destroy Phra Kiao’ to conjure up an attack towards the student union’s members. This was broadcast on Top News, a conservative news agency, as well.

After these reactionary responses went viral and caught wide public attention, on October 27th, the university administration issued a statement saying that the student union’s resolution was an attack on someone’s worshipped figures, repudiating the universal values. The statement did mention various values attached to democracy and human rights, but the following paragraphs said otherwise. The bottom line of this statement is to proceed with the behavioral punishment towards associated students.

In response, Uninspired by the Current Events posted the following picture on Facebook. It implies that the current power structure made students bow to the unquestionable, imagined sanctity of “Phra Kiao,” which in the end, is used to justify draconian acts towards challengers. It captured the 2017 incident, where Chotiphatphaisal and seven friends stood up against the feudalistic ceremony. One of the students was head-locked by the conservative instructor. 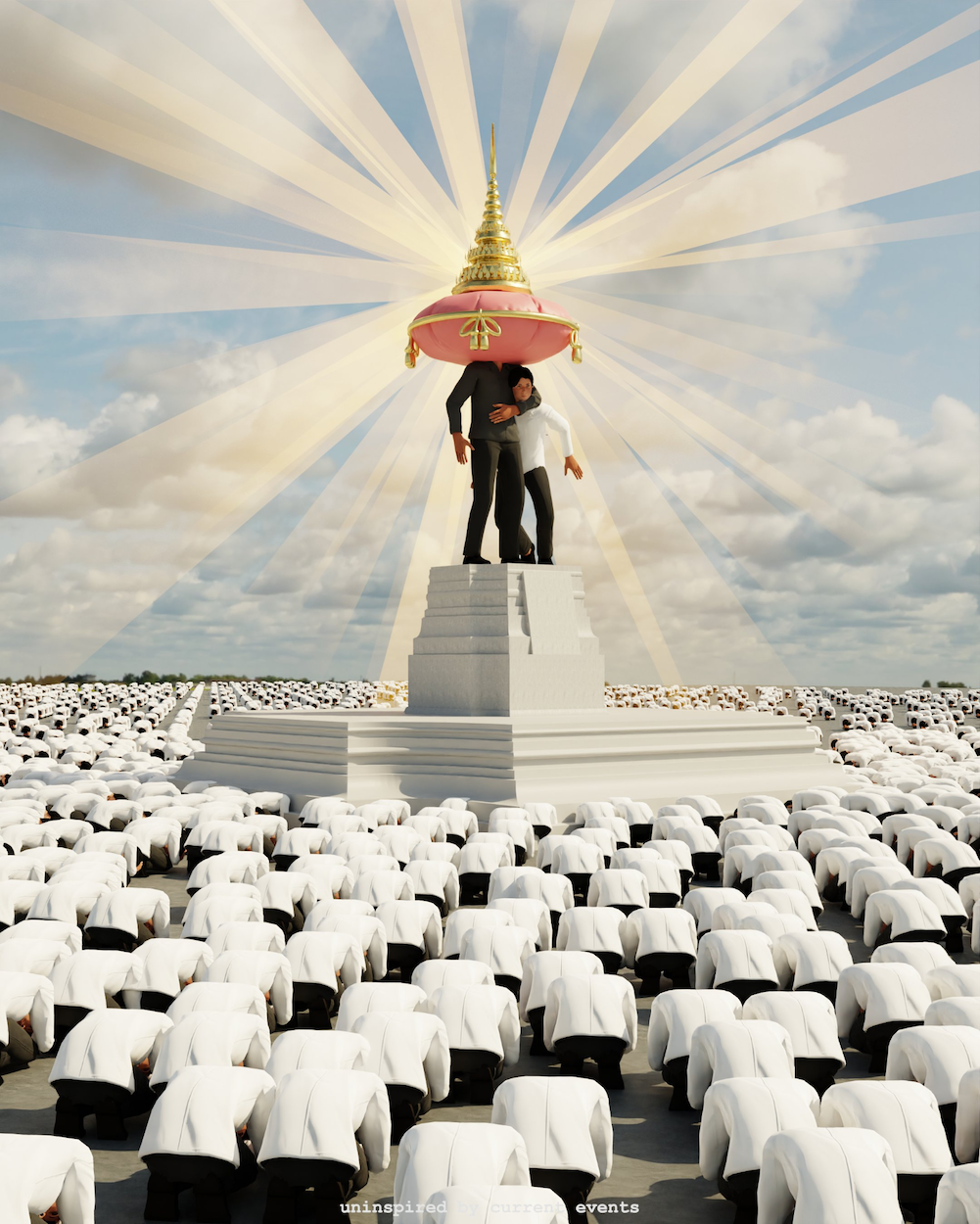 Later that evening, the Student Affairs Office (SAO) sent a private letter to Chotiphatphaisal. It demanded that the Editorial Department must have the SAO check and verify all of its publications before broadcast. The SAO also took down the publication, claiming that the magazine contained heterodox content aimed at stirring up conflicts in society. They as well stated that the incident will be reported to the Behavioral Office to further investigate and punish all associated students.

Back in July, there was the same censorship and threatening announcement by the university. This is not the first time that the university’s administration exerted its superfluous power towards students, undermining academic freedom and freedom of expression.

History is repeated here. Almost 70 years ago, there was a familiar situation that happened where Chit Phumisak, a former editor of Chulalongkorn University, was pulled off a stage by one of the engineering students as the punishment for heretical acts in the university publication. The reason for the punishment was that Chit modified the cover, using King Rama V’s coat of arms instead of the actual picture of him. On October 28th, 2021, marked the 68th anniversary of the incident, the Engineering Student Committee, for the first time in history, issued an official apology letter for the past injustice and a violation of human rights.

On October 15th, a professor of East Asian Languages and Civilizations and the former Director of Graduate Studies for the Regional Studies, James Robson, sent an email to Harvard’s Vice Provost for International Affairs, warning about the potential danger for Harvard students overseas in Chulalongkorn’s exchange program. But the same condemnation of individuals pushing for change occurs over and over.

The protest actions shook up the university’s administration for fear of the loss of its international reputation that they had been trying to gain for years. But this seems to be not enough for the university to reexamine its actions. Chotiphatphaisal and members of the student union are at high risk of being punished for their behavior, but this means that the university’s administration has completely disregarded the votes of 10,000 students, threatening campus democracy. 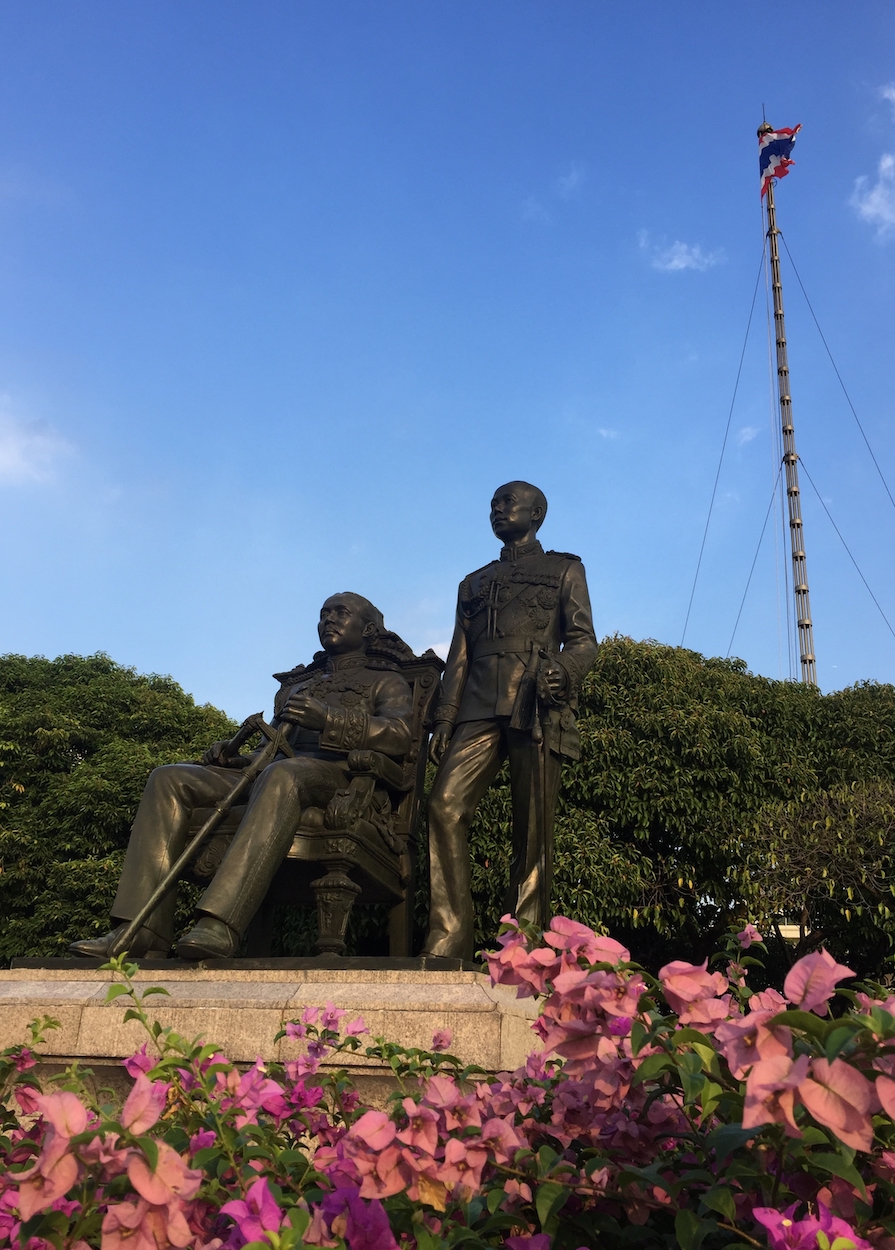 This is a serious menace to freedom of expression in the academic field, drawing parallels with the authoritarian military government Thais have been subordinated to for decades. For our part, we are fighting and resisting authoritarian acts in our university. We gained a number of supports not only from Thai civil society but also from the international arena. But our university is going to hold us back and punish us for trying to make changes. This is why we need more international attention, and actions towards them.

WE NEED YOUR HELP. We are proposing to the United Nations to recognize October 6th as the “International Day for the Protection of Students’ Freedom of Expression.” This matters because Thai student activists and youth protesters are being captured and incarcerated for demanding equality and freedom. The repressive regime silenced and killed untold family members and friends. This is why we need to resist.

If you are media, press, news reports, please do publicize, and write about this incident to your platform. The University is afraid of losing its international credit which is going to affect its rankings.

If you are a student organization, student union, committee, you can publish a statement in solidarity with us. You can do that by:

It is time that students stand by each other and aim for the fight for justice and equality.

If you were to write to the university, publish it on your platform and please send the statement or letter pressure to these emails: