One case was reported in New Taipei and one in Taoyuan. The new case in Taoyuan is part of the Delta variant cluster, which was found yesterday, while the new case in New Taipei is not linked to this cluster. Twenty-three have been put in quarantine and contact tracing is underway. Both cases were infected due to contact with family members.

With a total of 3,502 tested in connection with the cluster, 3,223 have tested negative, with 244 tests still being processed. 25 cases have been found through testing. 2,562 are in quarantine, 883 are on self-health management, and 60 have been asked to monitor their health. According to New Taipei mayor Hou You-yi, most new cases linked to the Banqiao elementary school cluster are found through second-round and third-round testing. 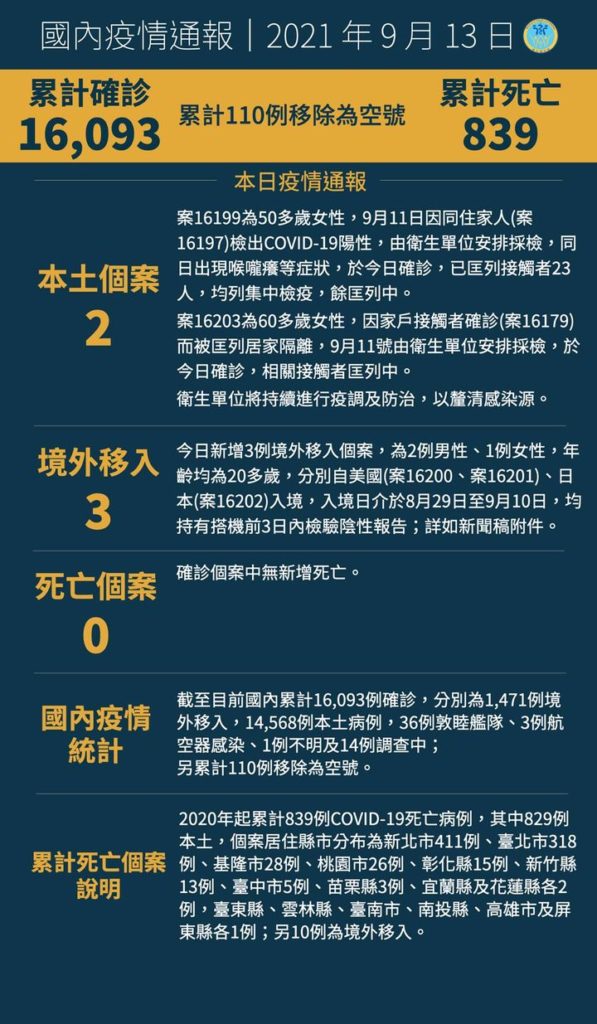 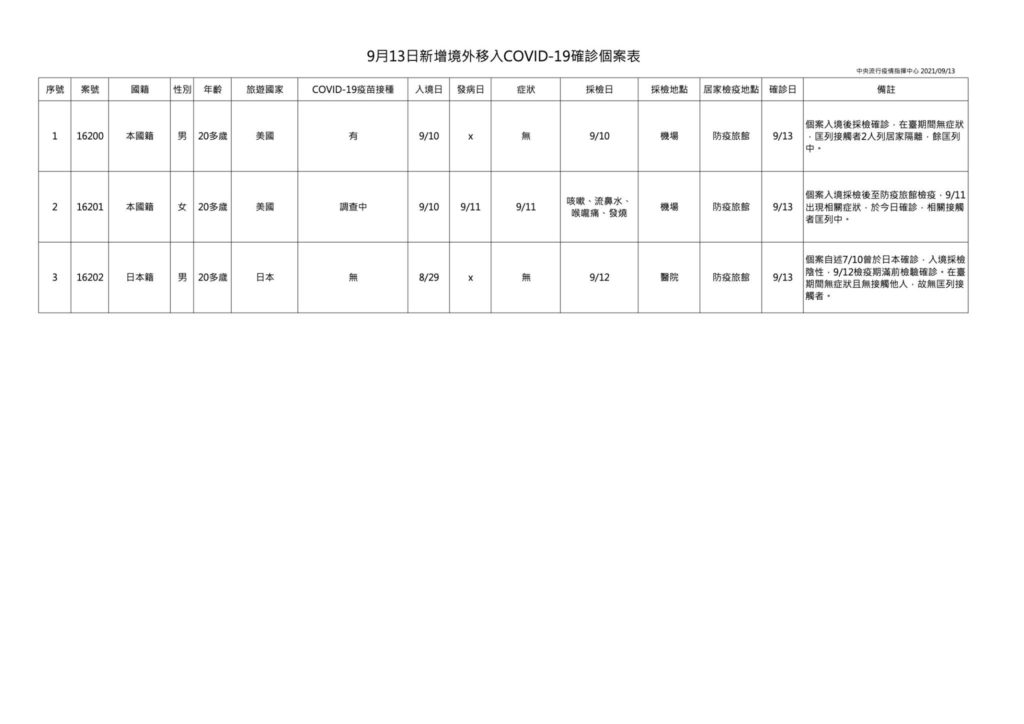 300 residents of the “A” building in the apartment complex that the Banqiao elementary school cluster spread to who are currently on self-health management were vaccinated today. Individuals who live in the “B” building, which was directly affected by COVID-19 cases, may be vaccinated similarly once they are released from quarantine.

The renovator who is part of this cluster’s genetic variant testing results should be known tomorrow. One of the cases added today is known to have the Delta variant. The renovator and his wife had been found to have additional travel history to the apartment building, with the CECC calling on the public not to stigmatize them for not remembering travel history from a month ago.

Some members of the Banqiao cluster have already been released from quarantine. Most of the children who are part of the cluster have light symptoms.

There was some confusion about plans to change a case in Wenshan to self-health management, but it was later decided that this case would still remain in quarantine. Their 60 contacts are also quarantined.

Students aged twelve to seventeen will be allowed to apply for vaccination outside of schools on the online vaccination registration period starting tomorrow at 10 AM. Over the weekend, given the typhoon, 147,481 were vaccinated, bringing coverage to 48.68%, which is 53.14 doses per 100 people. mRNA mixed vaccination is still being discussed by the CECC.

New Taipei plans to vaccinate around 170,000 students in schools on September 22nd. Classes will switch to online teaching for two days afterward, to give parents time to take care of their children, with thirty minutes of rest to take place after vaccination and schools to avoid strenuous exercise for students for two weeks afterward.

New Taipei will decide whether to allow for barbecue over the mid-autumn festival on September 15th, when the restriction on indoor dining is set to last until, but does not expect to lift this restriction. New Taipei mayor Hou You-yi does not believe that New Taipei is nearing when it can lift the current strengthened level two alert that is currently in effect. New Taipei will hold a press conference on September 16th to announce its added economic subsidy measures, which will take the form of paper vouchers.

On the other hand, Taipei will allow for mid-autumn festival barbecues to take place over the weekend, so long as social distancing measures are maintained or barriers used, with no more than 80 indoors and 300 outdoors. Barbecue will not be allowed in the Heping Park, due to the manpower it could require for police to monitor social distancing.

The two Songshan middle schools that have cancelled classes will resume school tomorrow if no new cases are found through testing today, with a case found there believed to be an old case.

1,379 are in quarantine in Taipei currently, but it is expected this number will decrease soon. Genetic variant testing for a case found in Wanhua yesterday is proceeding, though contacts have been quarantined. 649 text messages were sent out to individuals that ate in the same restaurant as this case, while students at a school attended by their younger brother in Datong have had classes cancelled.

There have been some reports of vaccine shortages in some areas, due to the use of a dual-track vaccination system for vaccinating the elderly. The CECC is working on this issue in order to minimize unnecessary travel. The CECC will also aim to simplify the steps needed for vaccination, given that the different handling process for vaccine brands may lead to confusion regarding how they are handled. The fewer steps there are, the less possibility of mistakes.

When asked about calls from an Academia Sinica expert to release COVID-19 measures once 80% of the population is fully vaccinated, the CECC expressed concern about the high number of COVID-19 cases in Israel and Singapore, which have high rates of full vaccination. Likewise, when asked about the possibility of COVID-19 becoming less deadly, the CECC emphasized that it is too early to conclude this would happen and, in the meantime, many unvaccinated individuals would die of COVID-19.

The CECC currently takes the view that due to the low number of COVID-19 cases in Taiwan, there would not be a large difference in focusing on widening first dose vaccination as much as possible versus emphasizing second dose vaccination for the elderly or high-risk groups. If the situation had remained severe in a specific area, such as Wanhua, the CECC would have focused on vaccinating vulnerable individuals and medical workers there. 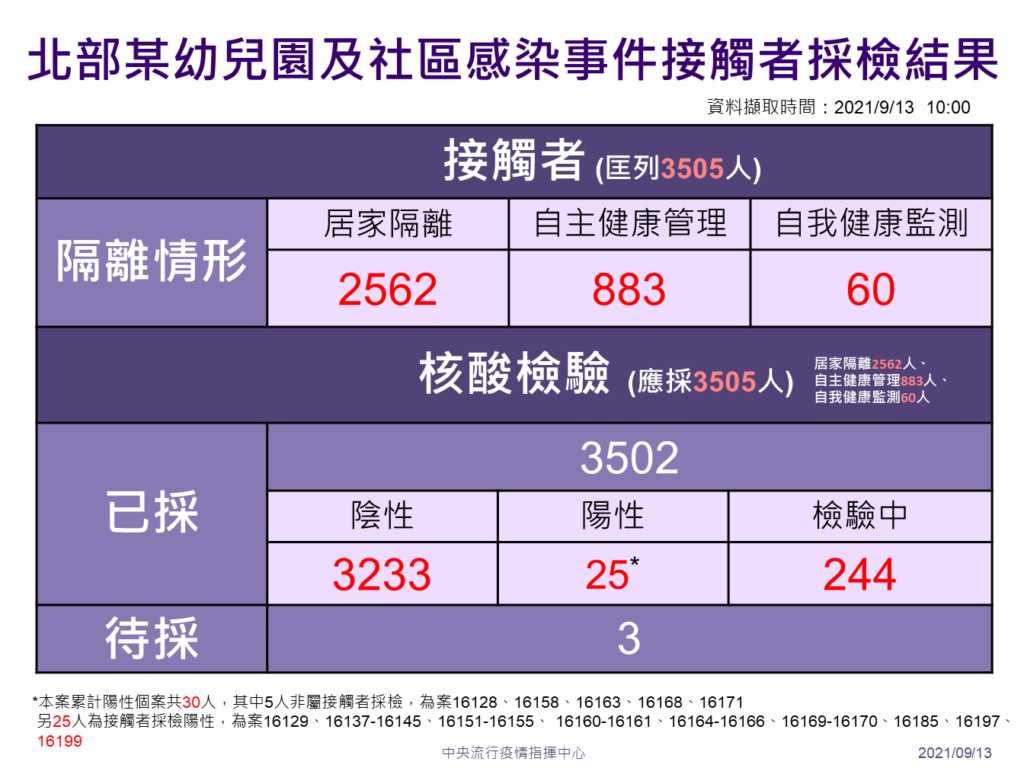 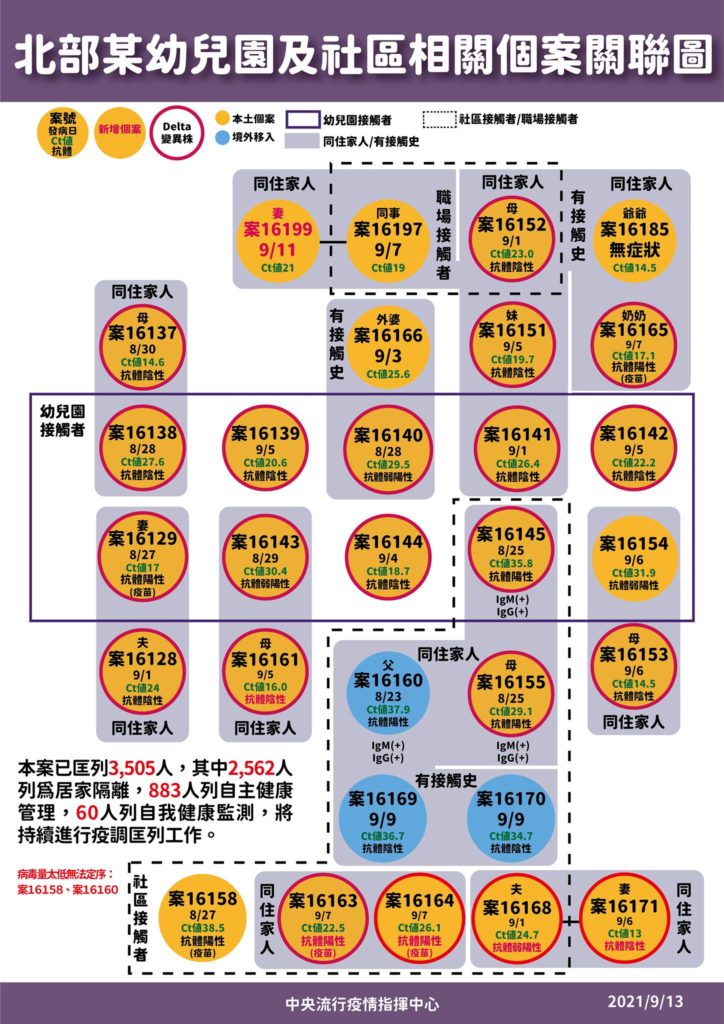 The CECC stated that there was no delay in the shipment of BioNTech vaccines over whether the packaging was in simplified Chinese or not, the CECC having decided that accepting packages with simplified Chinese was preferable to receiving them later. The CECC is also not planning to carry out third dose vaccinations, which is different from United Biomedical trying to apply for Emergency Use Authorization with a three-dose vaccination regimen.