WHAT EMERGES from the KMT chair election debate is that the party has failed to take action on the fundamental issues facing the party. This is no different than last year, when Johnny Chiang was elected. What surprises, then, is to what extent there were few ideological differences between any of the candidates and how the general discourse between the candidates gestures toward the shifts in the party over the past year. The general consensus of the party has shifted to become significantly more deep Blue compared to last year.

The debate, which took place last Saturday, was between four candidates. These were incumbent chair Johnny Chiang, who is running for reelection, former chair and former New Taipei mayor Eric Chu, former Changhua county magistrate Cho Po-yuan, and Sun Yat-Sen School president Chang Ya-chung. As is the usual debate format, the debate took the form of opening comments, a round of questions from media experts, a round of cross-examination between candidates, and closing comments. 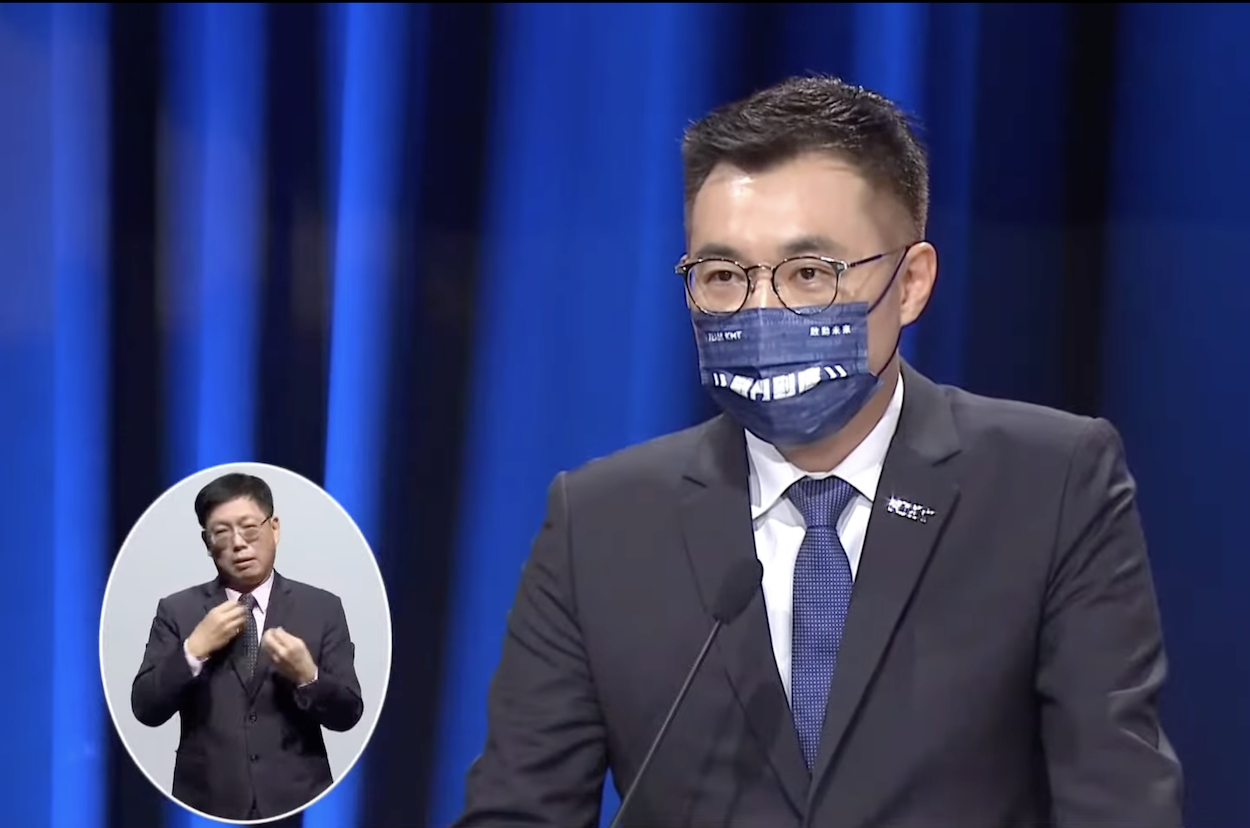 In his opening comments, Johnny Chiang called for the KMT needing to reemphasize its focus on the ROC, and strengthen the party to defeat the DPP. Chiang attacked the DPP for rallying young people against the KMT and changing the Labor Standards Act, also stating that there was a need to change the KMT’s image, but calling for party unity in order for the party to unite against its enemies and stimulating cross-strait exchanges on the basis of the 1992 Consensus.

Chang Ya-chung, whose Sun Yat-Sen School is a deep Blue educational institution and who was involved in efforts to import Chinese vaccines to Taiwan, was next. Chang began by emphasizing that Taiwan had been led astray by Lee Teng-hui and the DPP. Chang called for a return to the values of the party of Sun Yat-Sen and that the party should emphasize the identity of Taiwanese as Chinese. Chang stated that the party needed to raise funds to boost candidates and needed to attack the DPP on issues such as Tsai’s dissertation and Medigen, calling at the same time for a peace agreement to be signed with China.

On the other hand, Eric Chu claimed that the DPP was abusing the Taiwanese public, but that the public was critical of the KMT for being too weak as a political party. Chu touted his past record in government and experience dealing with SARS, cited difficulties with internal splits in the party, and claimed that—despite his own loss to Tsai Ing-wen in 2016 and failed bid for the KMT’s presidential candidacy in 2020—he had sought to rally behind Han Kuo-yu in 2020. Like Chiang, Chu called for cross-strait exchanges with China—though Chu did cite the need for the party to show it loved Taiwan.

Cho Po-yuan thanked those involved in negotiating vaccine purchases, such as Terry Gou, and thanked New Taipei mayor Hou You-yi for his efforts against COVID-19, while attacking the Tsai administration for what he claimed was its efforts to prevent vaccine purposes. Cho otherwise lashed out at the Tsai administration for what he framed as engineering splits in Taiwanese society and denigrating the ROC.

Media experts asked the four candidates about how the COVID-19 pandemic had not increased support for the KMT, even if it had not benefited the DPP either, based on polling, and how they planned to deal with this. Likewise, they asked how the candidates intended to win the support of young people and conduct online outreach, how the candidates evaluated cross-strait relations, and how they saw their role with regards to future presidential elections.

Cho Po-yuan offered rhetoric about how the KMT was originally a party of young people when formed by Sun Yat-Sen to fight the Qing empire, calling for plans to aid young people such as seen in Singapore. Cho called for a return to the 1992 Consensus, claiming that Taiwan only would lose diplomatic allies and that cross-strait relations would only become increasingly tense because of the DPP breaking from it to pursue a pro-independence agenda. 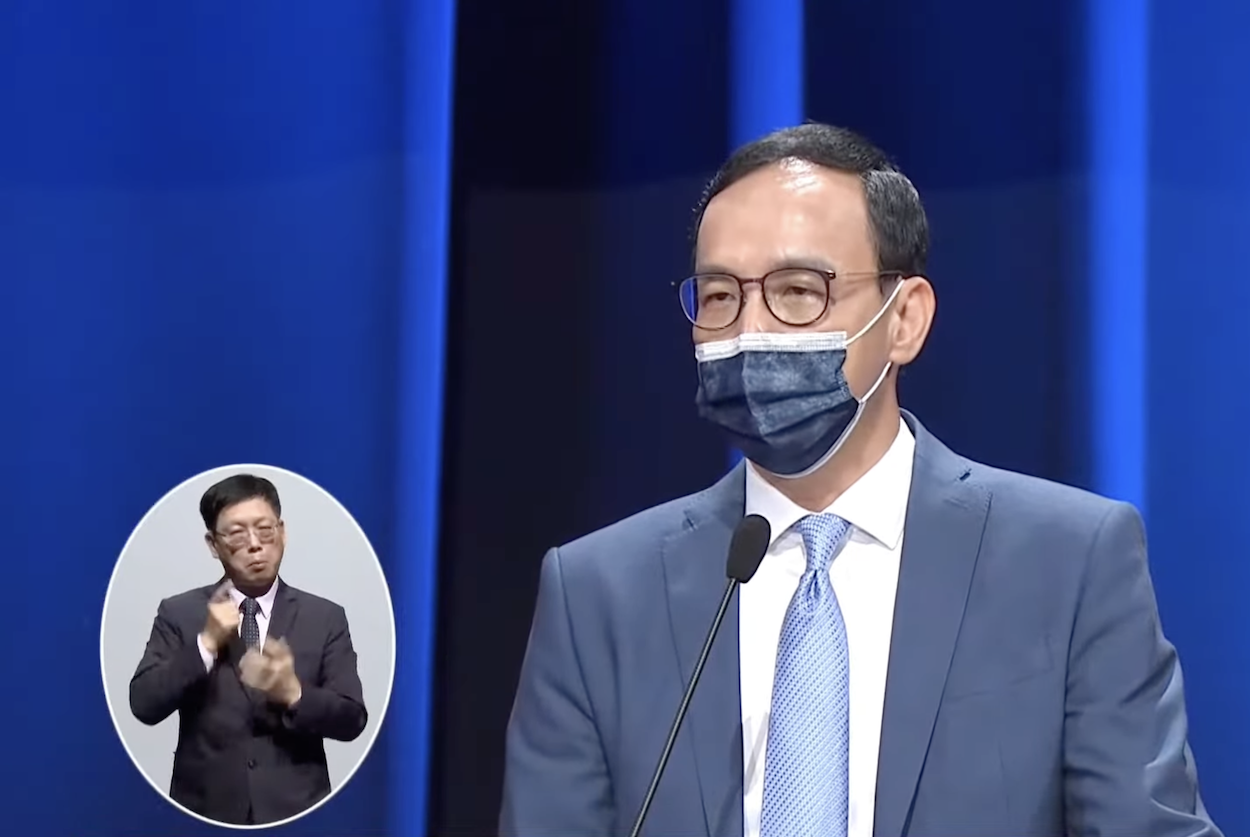 Chang Ya-chung similarly offered a rhetorical argument that the KMT had abandoned its party values, while attacking Chu and Chiang for abandoning these values, and claiming that they needed to focus on maintaining party values, rather than “throwing away the soul of the party” and worrying about public opinion. Chang attacked the other candidates for failing to understand that the 1992 Consensus could not resolve cross-strait relations and claimed that if the KMT could not offer a solution to cross-strait relations, it would not be able to win the support of young people.

Eric Chu called for attacking the DPP on the issue of vaccines, in that only Medigen vaccines are available to young people, while calling for allowing young people to join the party.

Johnny Chiang primarily touted his successes winning 4,000 young people to the party within one year of being in office, though he cited that the party has less than 3% of its membership who are young people. Chiang called for organizing a database of promising young people to work in politics or run for office.

Both Chu and Chiang offered relatively indistinguishable positions on cross-strait relations, with Chu calling for reestablishing exchanges with China on the basis of the 1992 Consensus, assisting taishang in China and their children regarding vaccination. Chiang agreed about a need to resolve cross-strait issues and that there was a need to conduct action to do this, including conducting visits to China, to avoid war.

During the cross-examination, Johnny Chiang sought to attack Eric Chu as willing to allow for pork imports from the US. Chu responded by emphasizing that he was opposed to pork imports but not opposed to a free trade agreement with the US. Chang Ya-chung sought to attack Chiang and Chu regarding comments made to AIT about US-Taiwan ties in relation to the pork import issue, with Chu and Chiang both denying making pro-pork import comments, Chu stating that he hoped to maintain relations with both US and Taiwan, and Chiang suggesting that such information had become misreported. Chiang suggested that he might pursue a lawsuit if his comments had been distorted by AIT. The attack on Chiang and Chu for being comparatively closer to the US is notable, given the pro-China views undergirding the KMT. 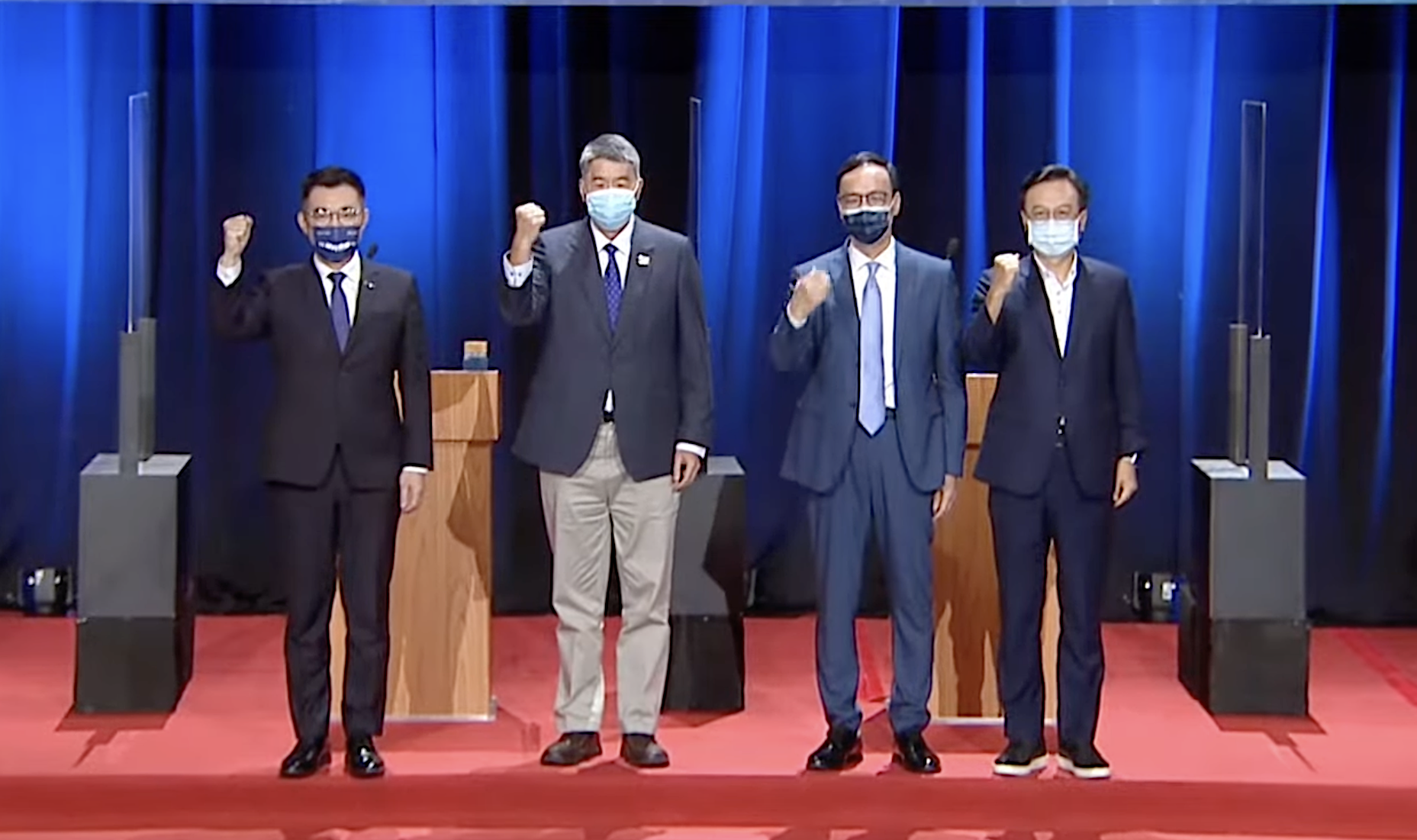 Candidates posing for a photo at the debate. Photo credit: TTV News/YouTube

In closing comments, Cho again emphasized his devotion to the KMT and the party’s need to return to party fundamentals. Cho, however, called for setting up a platform for young people to join the party and participate in elections.

Eric Chu called for party unity to maintain democratic spirit of Sun Yat-sen and Chiang Ching-kuo. Chu stated that the KMT needed to win in both 2022 and 2024, to reorganize internally so that the public could understand its policies. Chu further called for using referendums as a means to attack the DPP.

Chang Ya-chung called for protecting history and culture and defending the interests of former military veterans, such as the “800 Heroes.” Chang attacked other candidates for failing to understand the history of the party.

Lastly, Johnny Chiang stated that no matter who won the chair election, the KMT needed to win future elections. Like Chu, Chiang called for party unity in order to defend the interests of the party going forward.

Based on the KMT chair debate, there are few differences between Chu, Chiang, Cho, and Chang in terms of positions. Chu and Chiang were more moderate politicians in the past, as recently as 2020, when Chiang ran for chair and Chu unsuccessfully sought to be the KMT’s presidential candidate. But with the hardening of the KMT’s political line since then, so, too, have Chiang and Chu amended their views.

And while Chiang and Chu are the frontrunners in the chair race, one notes that they were attacked by other candidates with deeper Blue backgrounds such as Chang and Cho because of their past, more moderate record. It is to be seen how exactly Chiang and Chu will seek to differentiate their political platforms when they prove so similar. As both served as party chair in the past, neither will be able to distinguish themselves from each other through having served within the KMT in the past. In this way, both will be accused of contributing to or failing to resolve the KMT’s current impasse. Though both claim that they have no intention of running for president and instead acting as a “kingmaker”, it is likely to some within the party will suspect them of only saying this, but actually harboring presidential ambitions.

To this extent, with the emphasis on the 1992 Consensus, a specter presiding over the debate was that of Ma Ying-jeou. Despite Ma’s significant unpopularity, as reflected in the eruption of the 2014 Sunflower Movement during his presidency, the Ma period is now idealized by the KMT as a time of comparative popularity for the KMT compared to the present. As such, the KMT attempts to mechanistically trot out the 1992 Consensus and other Ma era formulas in the hopes that this will allow them to again win office, never mind that inflexibility on issues regarding Taiwan’s sovereignty is what cost them elections to begin with.