SEVEN DOMESTIC cases and two imported cases were reported at today’s Central Epidemic Command Center (CECC) press conference, along with zero new deaths announced. Of concern, however, is the fact that cases linked to a kindergarten in Banqiao, New Taipei have been confirmed to be of the Delta variant. This marks the first time that Delta has entered a crowded urban area in Taiwan in any significant way. All seven cases today were in New Taipei, with three already in quarantine.

The kindergarten case has expanded to the neighborhood, with six confirmed cases in an apartment complex in Banqiao. 1,013 have been quarantined in connection with the cluster, with 49 on self-health management. The apartment building thought to be more directly affected has had all residents put in quarantine facilities, while the other apartment building is on self-health management and is undergoing testing in the meantime. 358 tests to date are negative, 22 are positive, 633 are still processing. 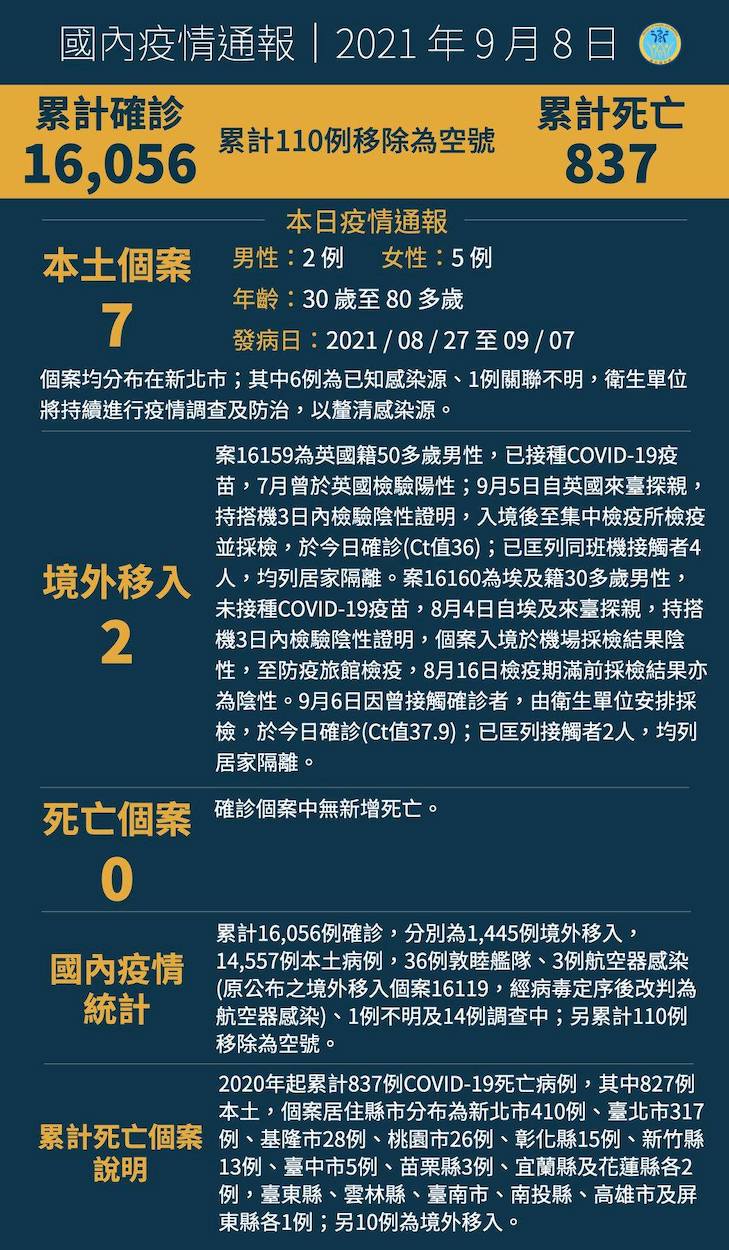 No new cases were added to a cluster among pilots in Taoyuan. With testing having only returned negative results, the cluster seems to be under control. Taiwanese airline staff and airline staff from other countries are currently housed in different quarantine hotels, but there is no contact with the public, either way.

Genetic testing shows that this cluster is not linked to the cluster in Banqiao, which is of unclear origin. Nevertheless, Taiwanese media has zeroed in on an Egyptian man who left Taiwan in June and returned in August as a possible source, due to his foreign nationality, with many prejudiced questions coming up in the CECC press conference today. The CECC itself has stressed that conclusions that this man was the origin of the cluster are premature, and the genetic variant testing for this man has yet to be completed.

More than one wave of infection is visible in the kindergarten cluster, due to parents that became infected from their children, but it is otherwise hard to determine how many waves there have been. The CECC is focused on containing spread, rather than devoting all of its efforts to finding the origin of the outbreak.

As a result of an anesthesiologist working at the NTU Hospital who was living in the apartment building being a confirmed case, the building that they worked in at NTU Hospital was closed yesterday. More than 1,100 tests were carried out, which were all negative. Afterward, the hospital resumed services. This anesthesiologist appears to be Taiwan’s first breakthrough case involving Moderna vaccination.

97 adverse reactions to vaccination were reported yesterday. 43 were not serious, there were 7 deaths after vaccination, 47 other reactions. 4 deaths were after AstraZeneca, one death was after Moderna, and two were after Medigen. 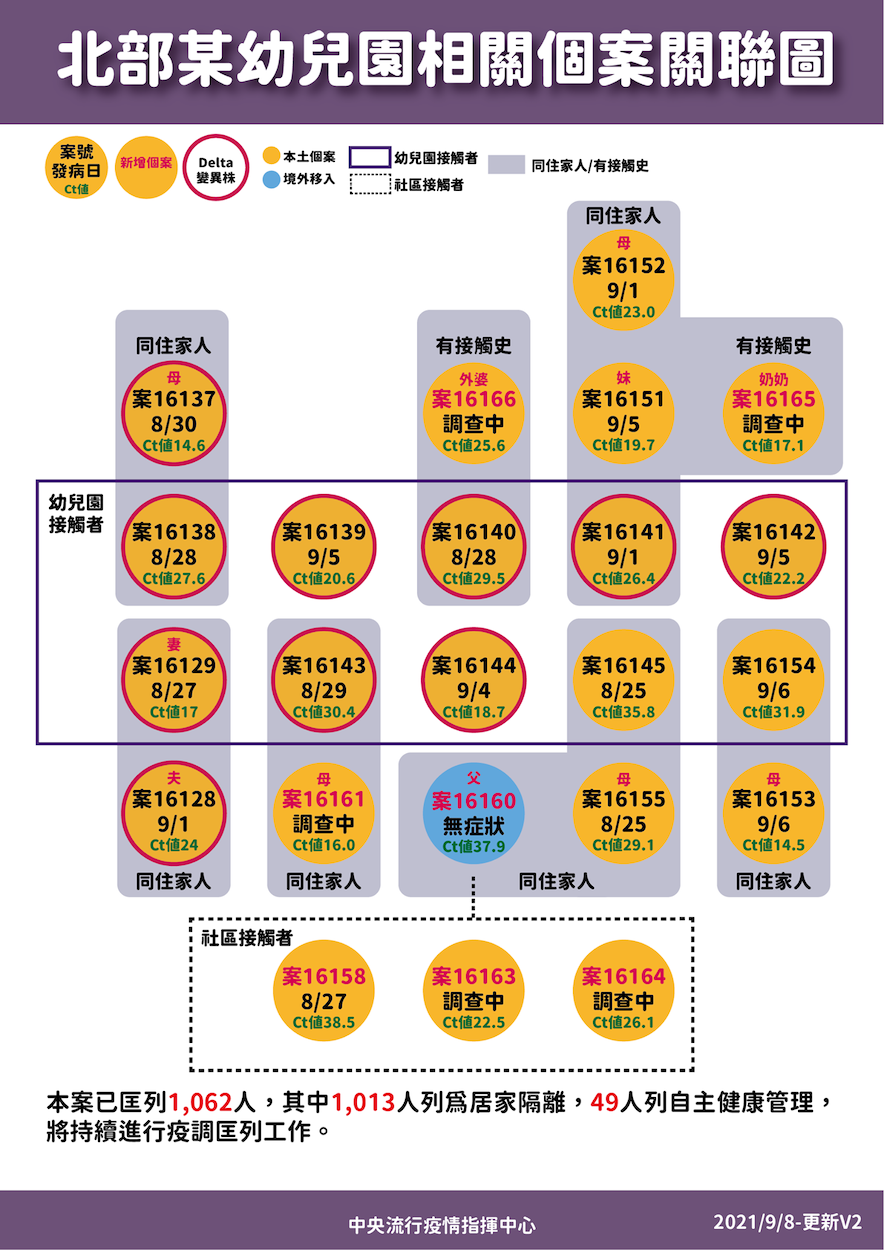 The CECC was asked about consent forms for high schoolers being vaccinated, with some concerns raised that some will be unwilling to be vaccinated because the consent form asks about pregnancy and needs to be signed off by parents. Students will be allowed to delay vaccination if they feel unwell or to have private consultations with doctors, to address such issues. Doctors can ask follow-up questions to students and need to sign off on the form as part of this process.

New Taipei mayor Hou You-yi and Taipei mayor Ko Wen-je also stated that they would not be escalating to level three, with Ko having previously stated that he intended to do so if there were any cases of Delta found in Taipei. New Taipei has suspended indoor dining, sports facilities, and cultural centers from September 9th until September 15th, to reevaluate after a week as to whether to maintain measures. Capacity for outdoor areas is also limited to 50%.

Authorities are investigating misinformation/disinformation claiming that there were fifty new cases today. Minister of Health and Welfare Chen Shih-chung stressed that the CECC is aiming for transparency, and that misinformation or disinformation does not help with the fight against COVID-19, such as claims that the Delta variant has circulated in Taiwan for some time. To this end, the CECC stressed that existing tests can still detect Delta and other variants of COVID-19, but they cannot detect which genetic variant that a case has. There is not a test backlog that would result in revision of past numbers, but there may be some delays in local authorities reporting statistics.

The CECC has expanded its definition of “contact,” to also include the contacts of contacts of confirmed cases as among those quarantined, not just close contacts. If one layer of contacts proves negative, that should indicate that layers which are further external are also negative, and that COVID-19 has not spread to the community.

Chen stressed that people with symptoms should stay at home and get tested and that employers should show understanding for employees that take the day off because of illness. 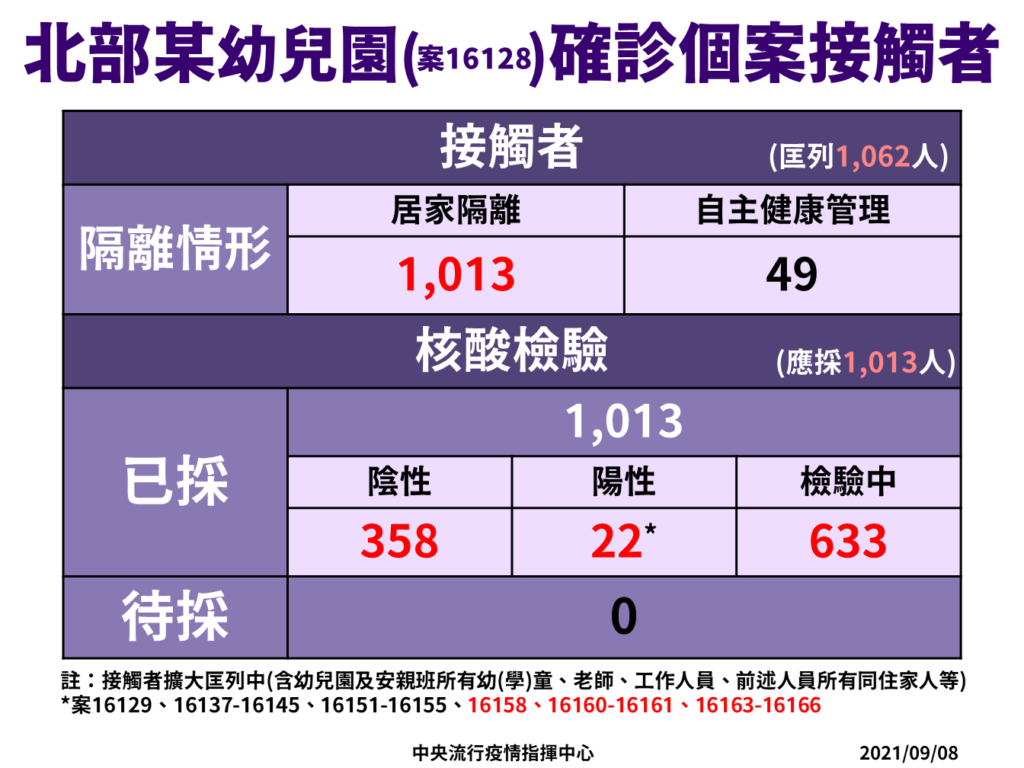 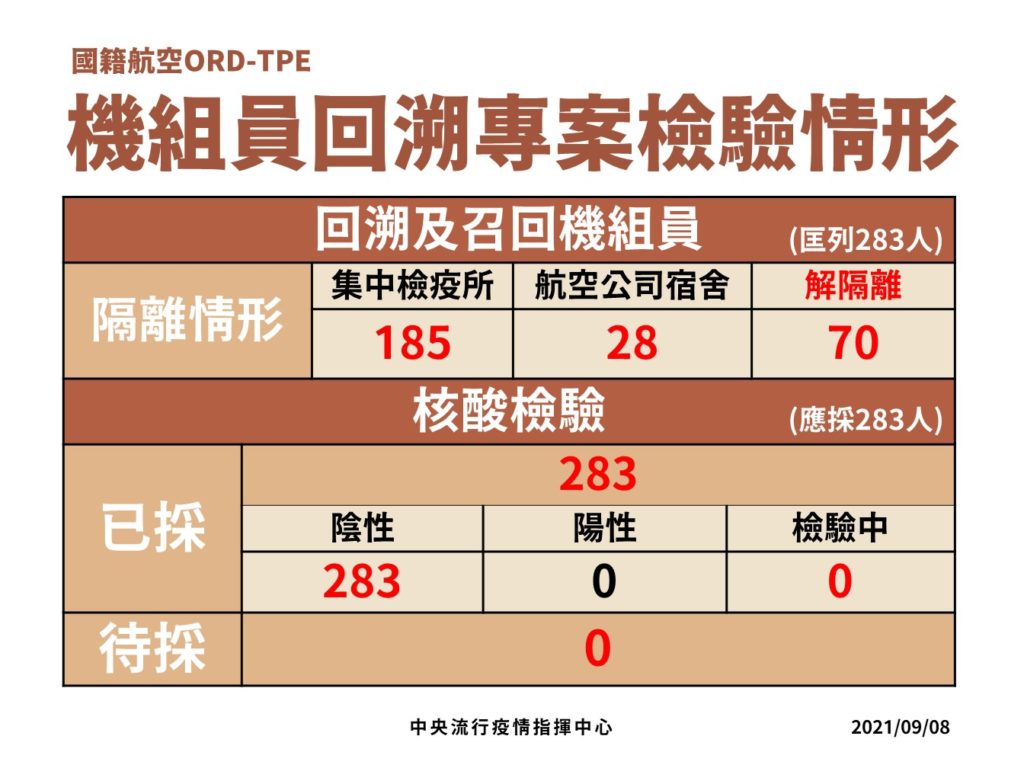 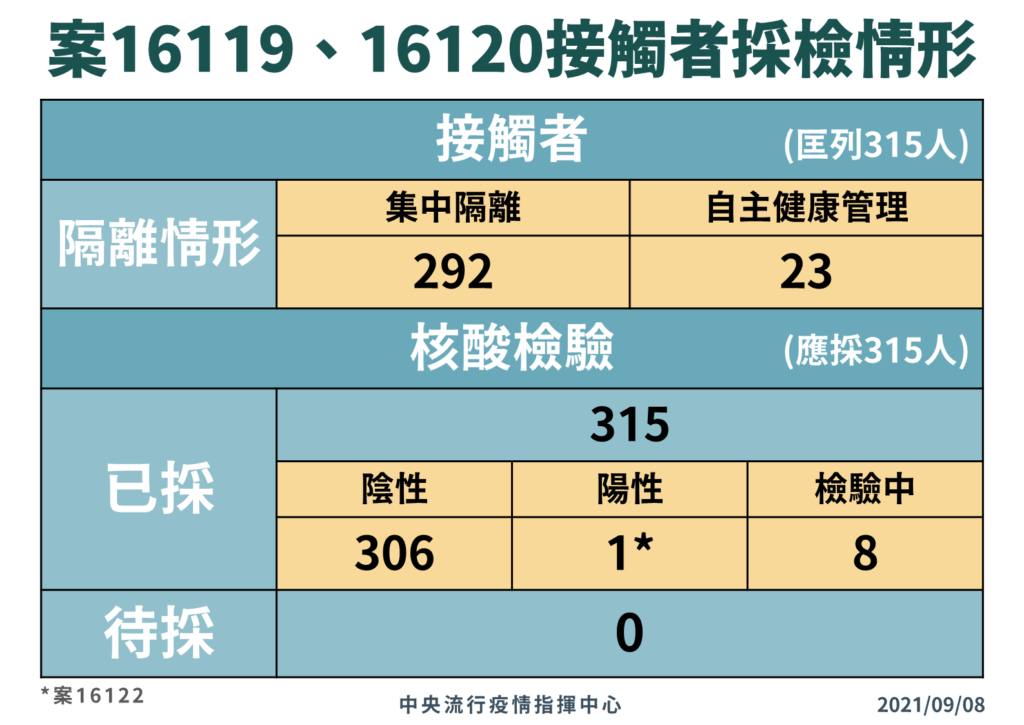 Information on testing in connection to the recent clusters. Photo credit: Ministry of Health and Welfare/Facebook

According to New Taipei mayor Hou You-yi, new measures rolled out in New Taipei wil suspend classes for classes in which a student has been quarantined until the results of PCR testing is known. More than 4,199 students in New Taipei are not in classes as a result of closures. New Taipei has also stated that it is clearing out hospital beds in preparation for a possible expansion of cases.

According to Taipei mayor Ko Wen-je, 2,801 tests yesterday resulted in no new cases. Seven schools have been closed in connection with cases, with 240 on home quarantine, and 643 with classes that have been suspended, which includes four kindergartens and three elementary schools. Schools will be closed for fourteen days in the event of Delta cases. For any class with an individual in quarantine, classes will shift to one to five days of online classes. Taipei is maintaining two large quarantine hotels for future events and clearing out hospital beds in preparation for an uptick in cases.

Ko called for eating out less, eating takeout, and stated that area-specific adjustments in alert level are not possible in Taiwan, given frequent travel. Ko suggested that changing the definition of alert levels was a possible response to the Delta variant.