CIVIL SOCIETY organizations rallied earlier this week, to call attention to the continued plight of Lee Ming-che. Lee, a human rights NGO worker who was kidnapped while entering China from Macau in March 2017, has now been imprisoned for four-and-a-half years. Organizations including Amnesty International Taiwan, Covenants Watch, the Taiwan Association for Human Rights, and legislators Freddy Lim, Hung Sheng-han, and Chiu Hsien-chih were in attendance. Notably, Hung was the only DPP legislator that attended, as Lim is an independent and Chiu is a member of the New Power Party.

Lee, who also previously worked in the DPP, is currently imprisoned on charges of seeking to subvert state power. It is thought that this occurred because of messages that Lee exchanged with Chinese friends about Taiwan’s experience regarding democratization. With Lee having pled guilty to the charges, it is believed that Lee was forcibly made to confess to various crimes by the Chinese authorities. 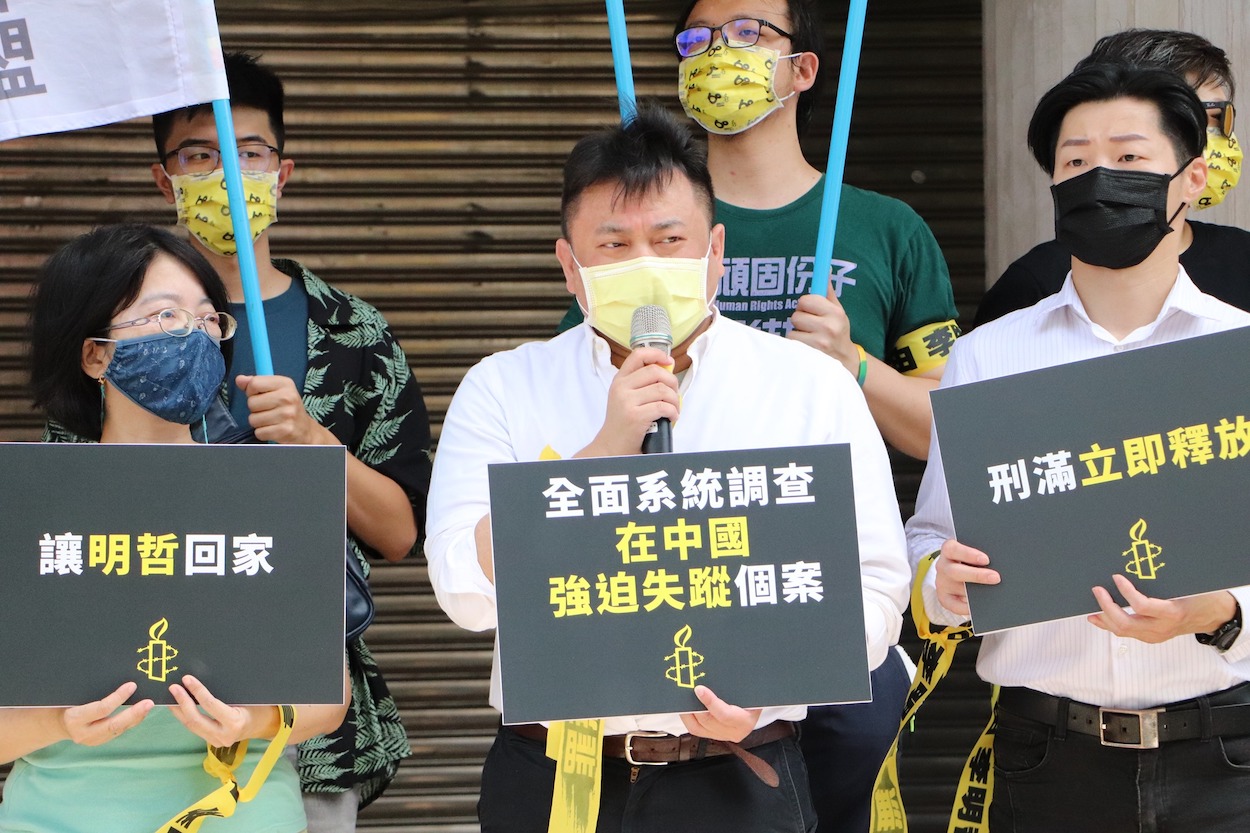 Lee’s wife, Lee Ching-yu, has traveled to China several times to try and see him, as well as to deliver medicine to him. Nevertheless, Lee Ching-yu has been blocked from doing so, with China retaliating by denying access and asserting that Lee is misrepresenting the conditions of her husband’s employment.

Indeed, Lee is not the only Taiwanese imprisoned in China on politically related charges. Other Taiwanese include academics Shih Cheng-ping and Tsai Jin-shu, as well as businessman Morrison Lee Meng-chu. The exact number of Taiwanese held in Chinese prisons on political charges is unknown, with 149 Taiwanese citizens in China who are missing as of last year, with the Mainland Affairs Council unable to confirm the location of 67 of them. For its part, the Chinese government claims to have arrested hundreds of Taiwanese spies involved in covert nefarious activity. 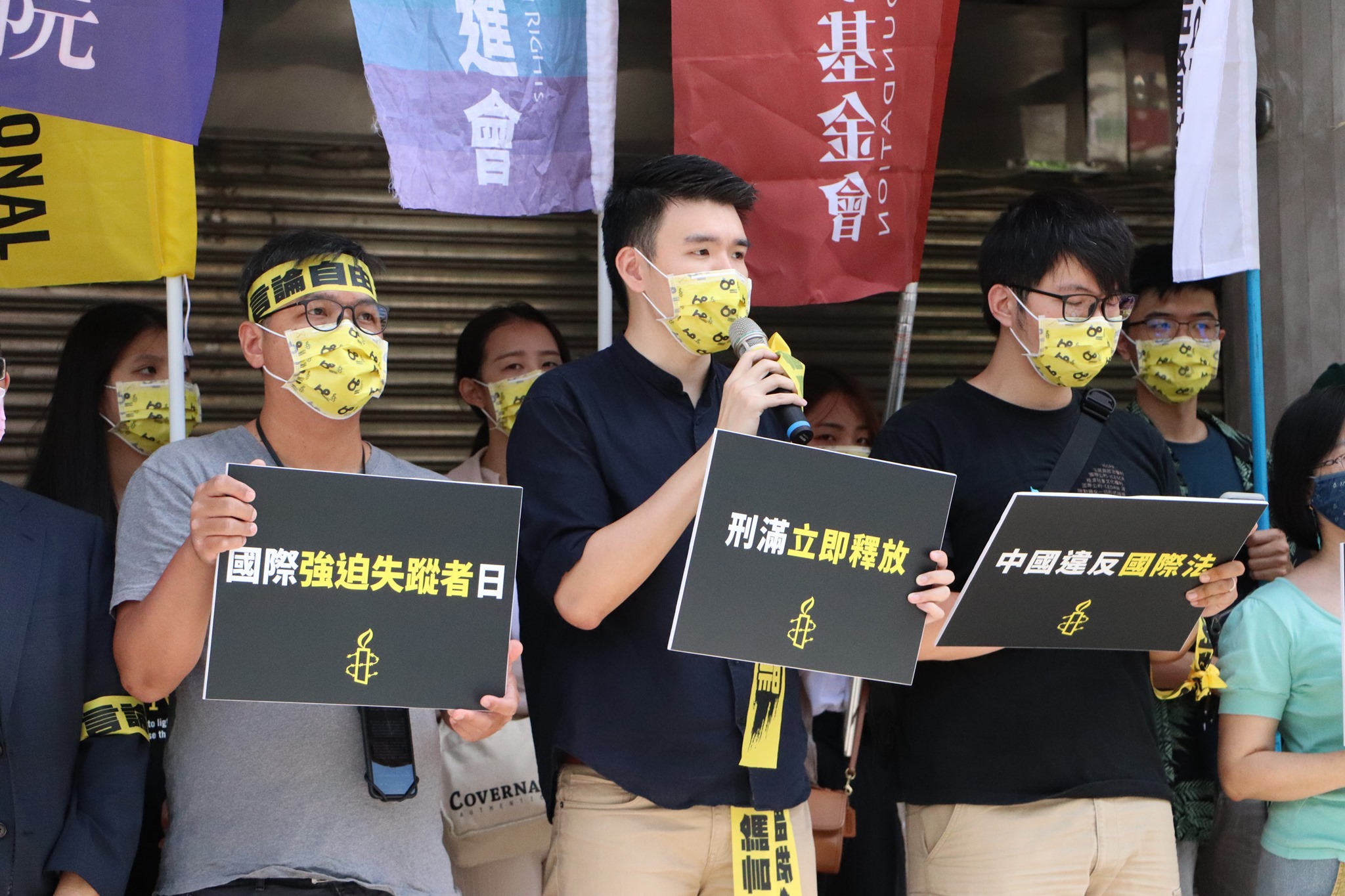 While Lee Ming-che and Morrison Lee Meng-chu had a history of activism and are generally thought to have pan-Green political views, Shih Cheng-ping and Tsai Jin-shu had pan-Blue political views but were still targeted by the Chinese government. Shih and Tsai’s family attempted to keep quiet about the detention in the hopes that this would ensure that Shih and Tsai were released more quickly. Lee Ching-yu has also reported encountering individuals that seemed to act on behalf of the Chinese government and sought to try and discourage her from publicly advocating for her husband’s release, stating that this would result in his being released from prison faster. Although this resulted in splits within the Lee family, specifically between Lee Ching-yu and her in-laws, Lee did not cease with public advocacy on behalf of her husband.

Lee was originally thought to be targeted under the auspices of laws passed in China to crack down on foreign NGOs. As such, at the rally, speakers called attention to the kidnapping of other foreign NGO workers in China, such as Canadians Michael Kovrig and Michael Spavor. It is believed that Kovrig and Spavor were targeted in retaliation for the arrest of Huawei CFO Meng Wanzhou in December 2018.

To this extent, speakers at the rally called not only for Lee’s release, but the establishment of a human rights mechanism to deal with such cases across the Asia Pacific as a whole, including kidnappings of citizens from Taiwan, Canada, and other countries.

While Lee was arrested after entering China, in more recent times it is also possible that Taiwanese will be targeted in Hong Kong. National security legislation passed by China’s National People’s Congress in June 2020 to criminalize sedition, circumventing the Hong Kong legislature, could potentially be used against Taiwanese in Hong Kong. The possibility has even been raised that this will be used to target Taiwanese simply passing through Hong Kong while transferring flights. It remains to be seen whether this will take place.

Although Lee Ming-che has now been imprisoned for close to five years, sustained advocacy on behalf of Lee has been lacking from the Tsai administration as a whole. Instead, it has primarily fallen to progressive civil society groups and a small minority of legislators to push for Lee’s release. Given that a broader spectrum of Taiwanese society has not rallied around the cause, this may encourage the Chinese government to take similar actions against other Taiwanese in China in the future. This could take place on any number of grounds.