TWO DOMESTIC CASES and eight imported cases were announced at the Central Epidemic Command Center’s (CECC) daily press conference today. None of these cases were already in quarantine. One death was announced.

The current level two alert has been extended from August 24th to September 6th, with the aim of maintaining current measures because the situation is stable. MTVs, KTVs, mahjong parlors, arcades, nightclubs, and bars are still closed, though 80 are allowed indoors and 300 for outdoor venues now. Anything more than this number will require COVID-19 prevention plans to be provided to the CECC. People living together do not need barriers when they eat together, with the CECC continuing to view barriers as an effective measure. 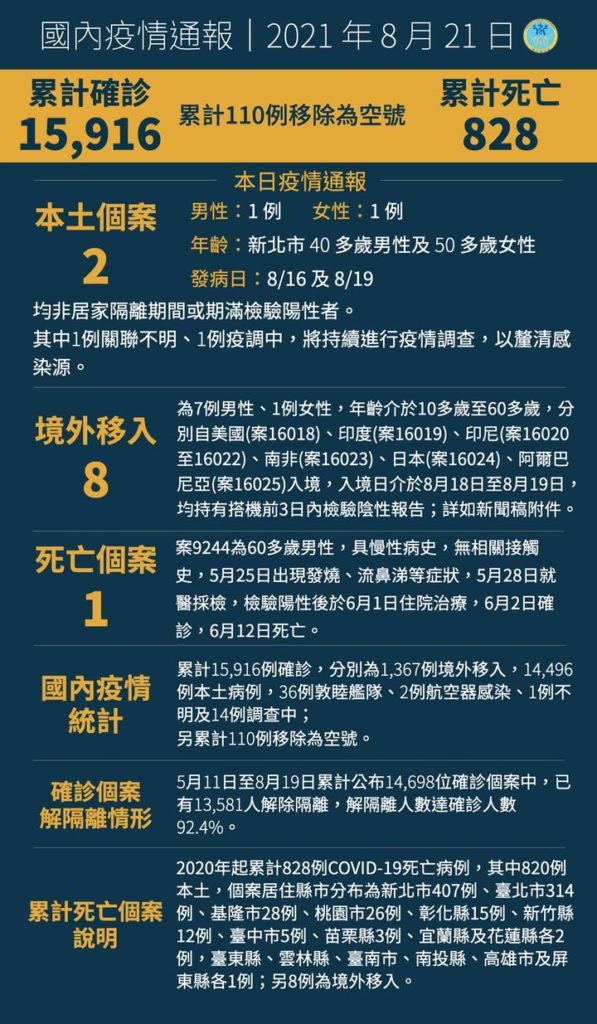 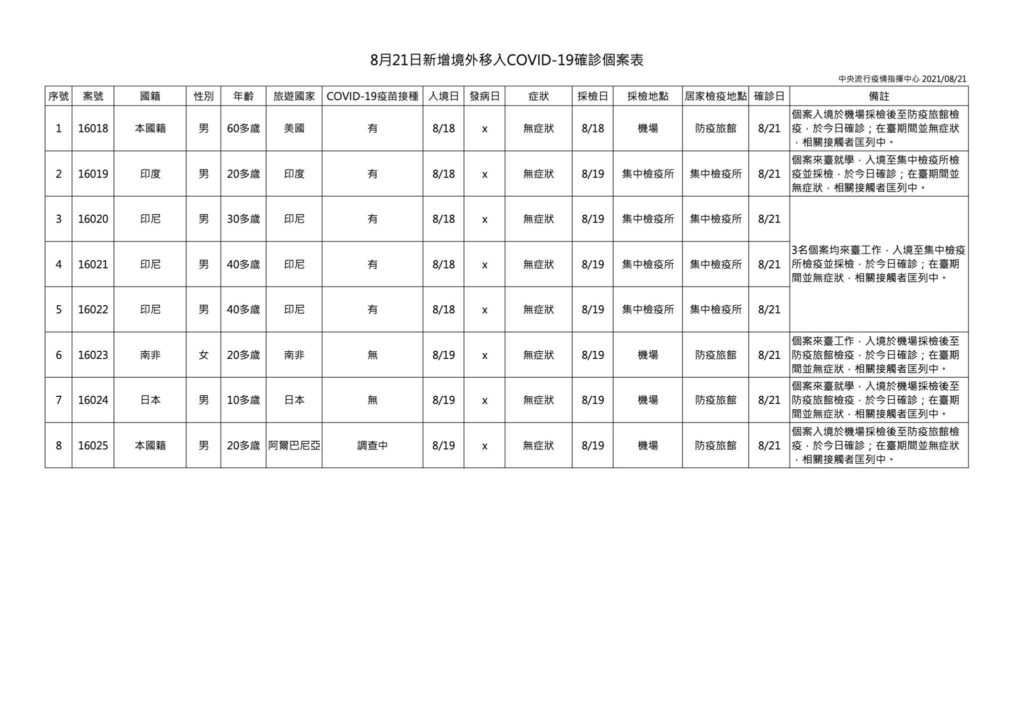 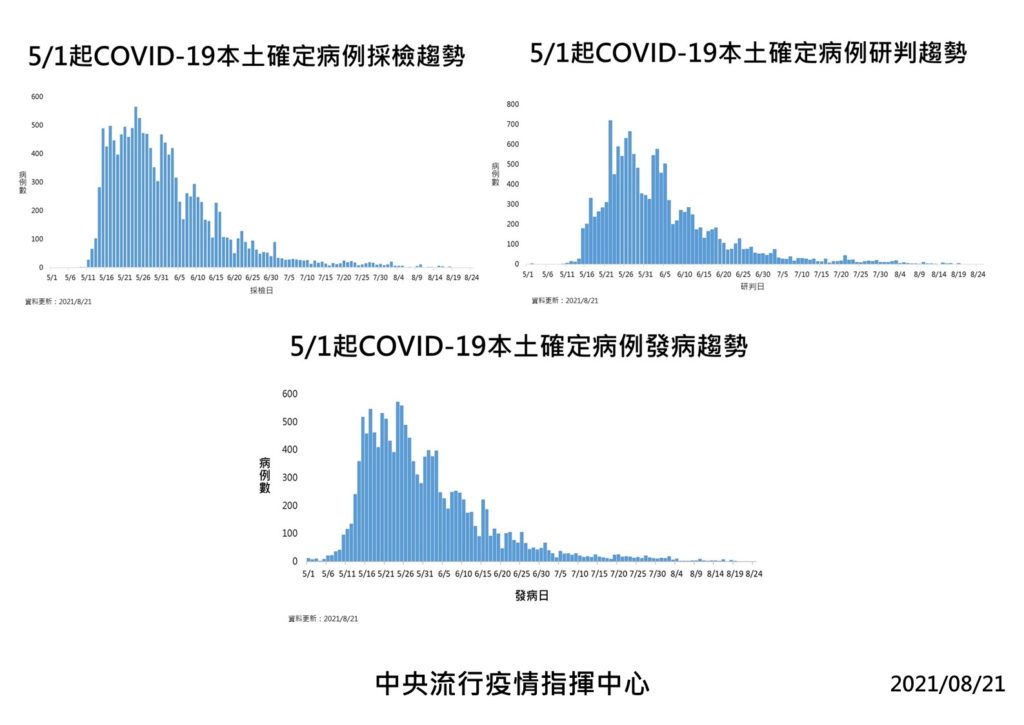 Information on the new cases today (left), information on the imported cases reported today (center) and further data released by the CECC (right). Photo credit: Ministry of Health and Welfare/Facebook

Visitors to a number of medical institutions that previously did not allow for visitors are now allowed, though negative tests are required for entry, and this will take place within certain times. Water activities can also take place within the standards allowed by relevant authorities.

The process for allowing international students to enter Taiwan can now begin, with schools providing lists of international students so the visa application process can take place. Because students will need to be quarantined when they enter Taiwan and tested as part of this, this is equivalent to conducting general testing for students. Students will be able to attend classes online if they are unable to enter in time or unable to enter.

Returnees from Palau that went to Palau as part of the Palau travel bubble will be tested, due to concerns about two imported cases found there.

More appointments for Medigen will take place from August 23rd to August 24th, with more supplies added for vaccination. 200,000 more vaccinations were already added. 40,000 more teachers are expected to be vaccinated in upcoming rounds. Vaccinations for members of the army will also take place, though no forced vaccinations are mandated, and vaccination takes place based on supply.

Hau Lung-bin’s attempt to legally overturn the Emergency Use Authorization for Medigen has been thrown out by the courts.

Although BioNTech vaccines have moved beyond just EUA in the US, this is not expected to simplify the process for purchasing Medigen vaccines.

The rate of infection at testing sites in Taiwan is lower than 0.01% currently.

There have been 34 cases of adverse effects from vaccination related to vein sores, while there are 32 related to lung issues.

According to New Taipei mayor Hou You-yi, one case today was in Xinzhuang and the other was in Banqiao. Both cases had an unclear source of infection, though the case in Xinzhuang is suspected to have gotten COVID-19 from her husband and the case in Banqiao may be an old case. Hou called for caution on the Palau travel bubble, in order to avoid the Delta variant entering Taiwan, and stated that New Taipei would evaluate the feasibility of implementing relaxed measures from the CECC, expressing concern about the difficulty of implementing eating without barriers for individuals that live together.

Hou thanked Terry Gou when asked about claims by Gou that BioNTech vaccines would arrive by the mid-Autumn festival and stated that while New Taipei encourages teachers to be vaccinated, it does not specifically encourage them to be vaccinated with any particular vaccine. 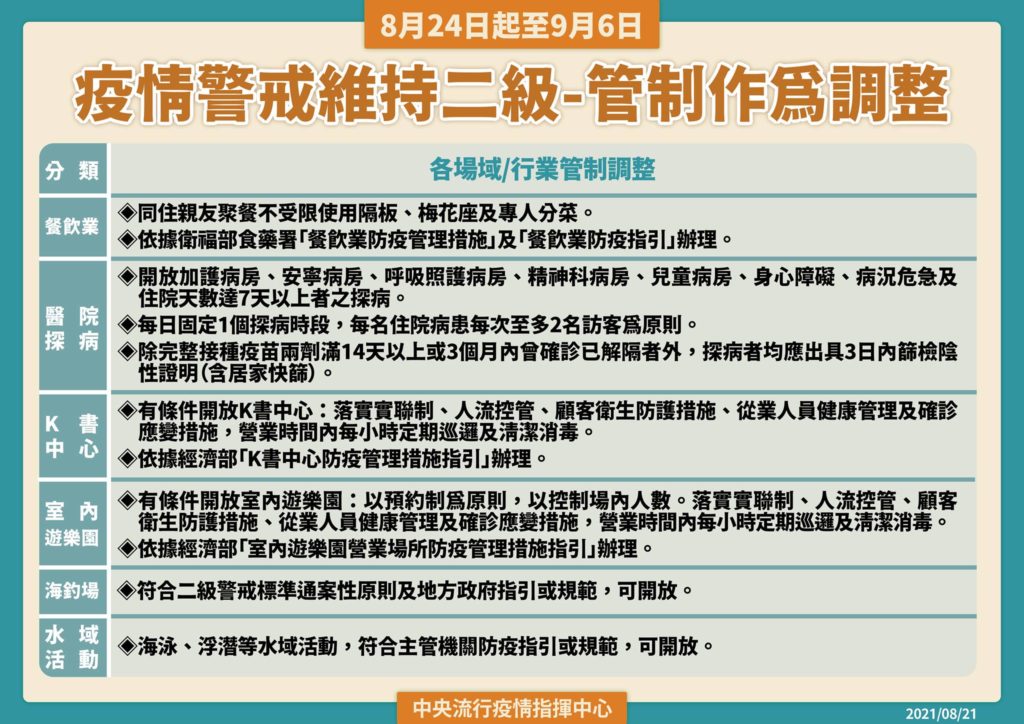 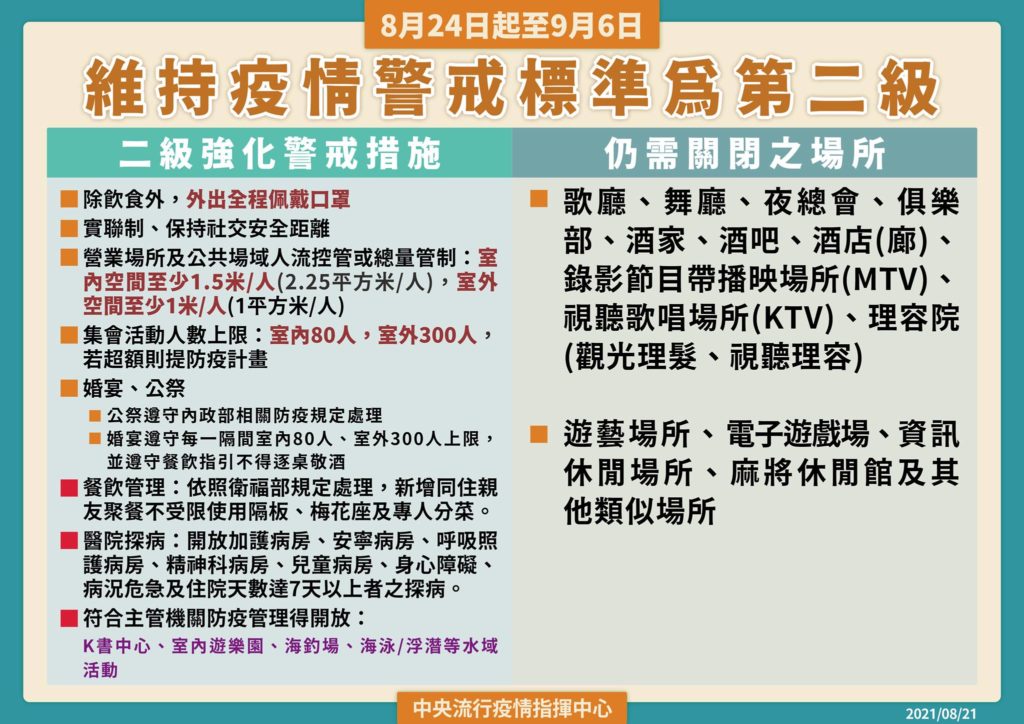 Information on the relaxed measures for the extended level two alert announced today. Photo credit: Ministry of Health and Welfare/Facebook

Although there were no cases in Taipei today, Taipei mayor Ko Wen-je expressed concern regarding that the eight imported cases were in Taipei. 1,291 tests at neighborhood testing stations yesterday found no new cases. While there are no set plans to dismantle neighborhood testing stations, which serve a monitoring function, Taipei is considering this due to the cost. According to Ko, the number of cases with unclear sources of infection is going down.

Ko stated that he expects the age of cases to go down, due to young people not being vaccinated, and called for relaxing measures once Taiwan’s citizens were fully vaccinated. In the meantime, measures will gradually be relaxed. Six new sports are added to the 51 sports that have been relaxed, with athletes allowed to take off masks for sports competitions if they have one dose of vaccination or negative tests. Limits on no more than 50 in indoor venues or 100 for outdoor venues will be maintained.

Ko suggested that Taipei will follow New Taipei in instituting two PCR tests for release from quarantine. Taipei suggested that neighborhood activities and activities for the elderly will be relaxed next. Ko called for electronic distribution of stimulus vouchers and expressed concern about the feasibility of allowing for eating in restaurants without barriers for people that live together, calling for the implementation of vaccine passports using the TaipeiPASS app instead.