SIX DOMESTIC CASES and three imported cases were announced at the Central Epidemic Command Center’s (CECC) daily press conference today. Two of these cases were already in quarantine. One death was announced.

Three cases were reported in New Taipei, two cases in Taipei, and one case in Changhua. 92.2% of cases to date have been released from quarantine.

2,014 individuals were tested at the Taipower Building yesterday, all of which were found to be negative. 58 tests are being processed. Minister of Health and Welfare Chen Shih-chung visited the Taipower Building to inspect testing and recommended that testing take place in a more open area, though he did not publicize this to the media very much, and did not make this known to the Taipei city government beforehand, with media speculating if he did this to upstage Taipei in expressing concern over clusters. Cases that were announced yesterday but not included in the official count, such as a pregnant woman and her child, are included in today’s count. 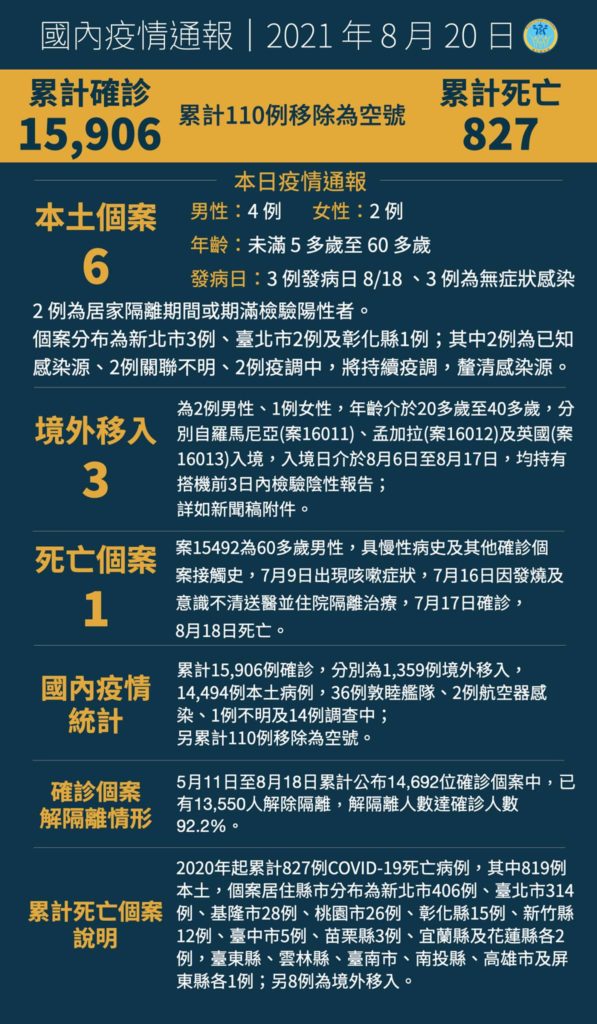 Variant testing found twelve imported Delta cases this week. Nine of these cases had one or two doses of vaccination, with three fully vaccinated, all of which had Moderna vaccines.

There have been 67 Delta variant cases to date, 13 of which were domestic cases from the Pingtung cluster, and 54 of which were imported.

Variant testing for domestic cases has only found Alpha variant cases so far, including from cases at Taoyuan International Airport and a cluster at an apartment building in Yonghe.

One of the imported cases today that traveled from China did not come from an area with higher reported cases due to the Delta variant. There is not any trend indicating a higher number of Delta cases from China, as there have been from other countries.

Distribution of vaccination subsidies to hospitals started after April. Hospitals should distribute funds to workers within one week. Funds were distributed on August 4th for information handed in to the CECC on July 22nd, though some further information may be required. The CECC’s policy is to distribute 80% of funds before review.

Greater Taipei is still considered a high-risk area, but it is likely that restrictions on visitors at long-term care facilities will be relaxed.

The CECC will announce what measures are relaxed after August 24th tomorrow at noon. This may include restrictions on water activities.

Individuals that violate confidentiality measures for vaccination data will be punished in accordance with the law.

If individuals violate measures for group eating of people that live together, it is they that will be punished, not the restaurant, which does not have a responsibility to investigate. Customers cannot request that restaurants change the measures they set for COVID-19 prevention measures, they can leave the establishment otherwise.

Local governments can propose alternative plans for school closures, if they have measures in mind. Otherwise, this will be carried out in accordance with standard procedure.

Chen re-asserted that his announcement that the CECC does not believe the current outbreak was linked to the Novotel hotel cluster was based on the CECC’s assessment of the data. These comments were not pre-approved by any meeting. 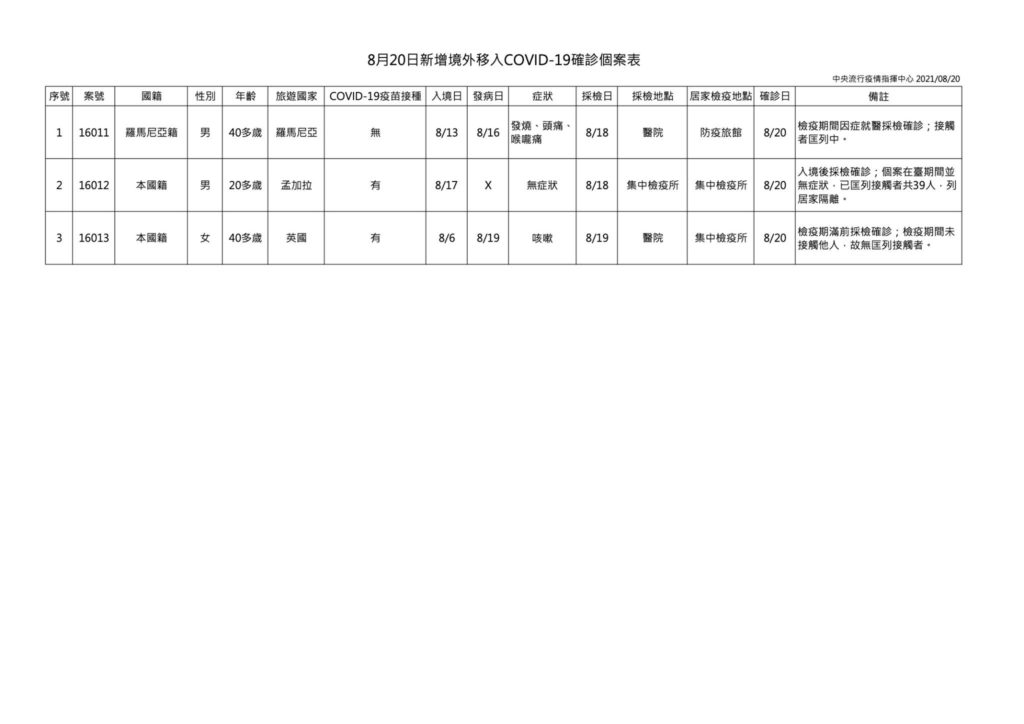 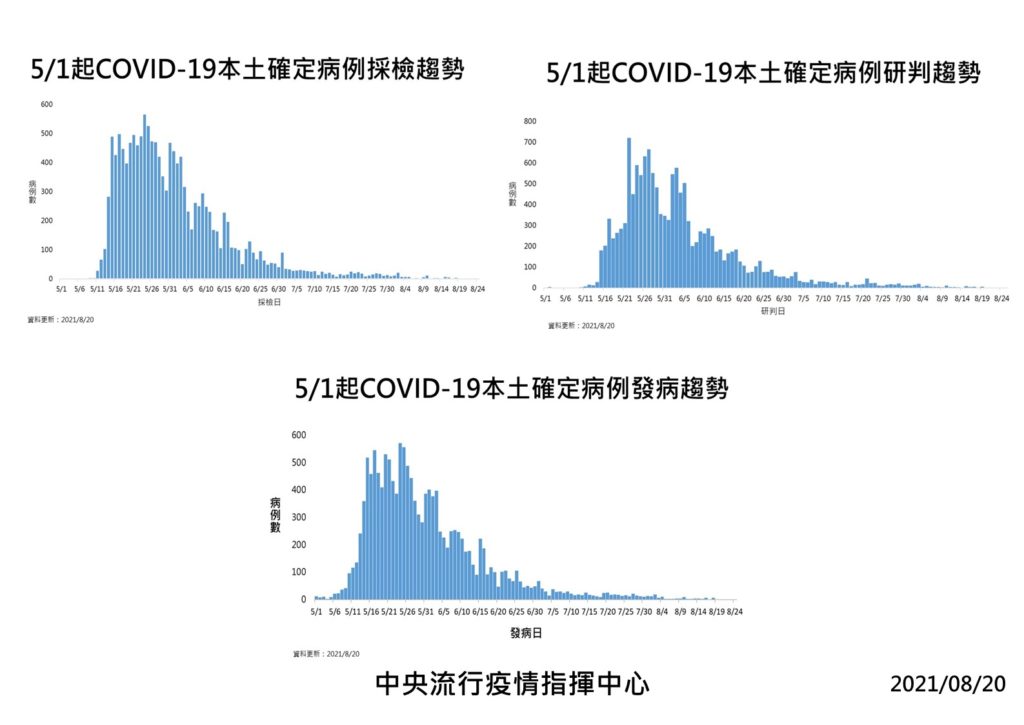 Information on the imported cases reported today (left) and further data released by the CECC (right). Photo credit: Ministry of Health and Welfare/Facebook

The CECC is still aiming to widen first dose vaccination as large as possible and stresses this is true of every country. 3.18% are fully vaccinated to date.

When asked about a meeting of the Advisory Committee on Immunization Practices that members of the Medigen review committee attended on July 25th, the CECC stated that Medigen was not the only matter discussed at the meeting. When asked about a petition for a referendum against the use of Medigen that has been launched, Chen stated that those involved in the petition could go ahead with organizing it, and that it was their right to protest if they wished to, with the COVID-19 situation more under control.

According to New Taipei mayor Hou You-yi, one of the three cases in New Taipei today was already in quarantine. Although the sources of transmission of two cases are unknown, one case in Linkou is likely to have become infected by a coworker, while another case is thought to probably be an older case. Hou called for more stringent measures for travelers to Taiwan, so as to prevent the Delta variant from entering Taiwan. New Taipei will require two negative PCR tests for Delta variant cases and called for such measures to be applied more broadly.

New Taipei intends to primarily rely on contract tracing for COVID-19 cases found in schools, instead of quarantining all members of a class if cases occur at schools, though it is not impossible that it will change measures down the line. New Taipei criticized the CECC’s policy of allowing individuals that live together to eat at restaurants without a barrier, seeing as restaurants would have difficulty being able to tell who does or does not actually live together, criticizing the central government regarding this.

To this extent, New Taipei will open water activities after the CECC makes clear what its regulations for them are, and will distribute vaccines to teachers when they are handed down by the central government. New Taipei stated that it will conduct strict inspections of quarantine facilities to avoid drugs being smuggled into them and claimed low willingness from young people to be vaccinated with Medigen, criticizing the central government on vaccine availability.

According to Taipei mayor Ko Wen-je, one of the two cases in Taipei today had an unclear source of infection. 1,378 tests in neighborhood testing stations yesterday found no cases. Ko states that the number of cases is still declining, but he expressed concern about clusters in office buildings, calling for remote work to take place when possible. Ko stated that with individuals returning to offices, this has led to an increase in the number of individuals in quarantine.

In a reversal from previous assertions by Ko that classes in the fall would primarily be online, Ko stated that given current conditions, physical teaching was possible and would take place when schools reopen on September 1st. Ko stated that there would be half a day or a full day of remote teaching every week or every other week, to prepare for the possibility of another shift to level three status, in which schools would be closed. Level one or two status would mean that physical classes could take place, with four models rolled out for online classes. These four models are special classes for individuals not in class due to COVID-19 concerns, teachers streaming classes while in the classroom, teachers using pre-recorded classes, and schools making adjustments as they need. 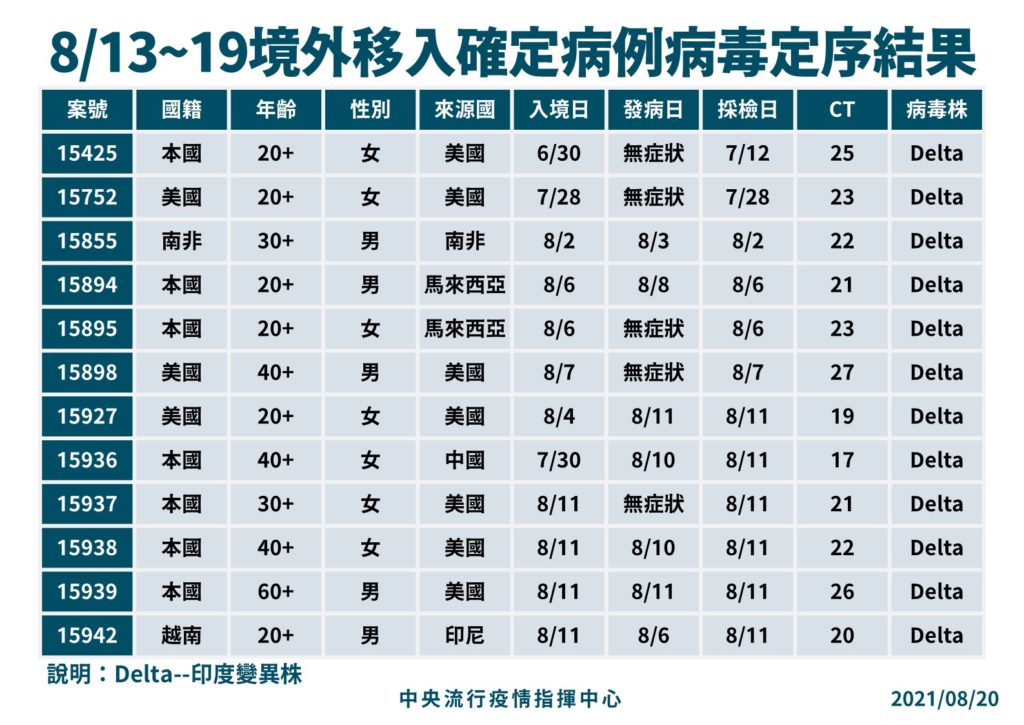 Information on variant testing for this week. Photo credit: Ministry of Health and Welfare/Facebook

Ko is likely announcing such measures, a mere ten days before classes start for the fall semester, in order to not be seen as wholly reversing course on his previous announcement that the fall semester would be mostly online.

Ko called for relaxing measures once Taiwan reaches 60% vaccination, including no longer having to wear masks, though Ko agreed with Hou that the CECC’s measures to allow individuals living together to not have to use barriers were irresponsible for restaurants. Ko declined to comment on referendum plans to halt the use of Medigen, but stated that he could not understand why Taiwan was short on vaccines, and that the CECC needed to publicize how standards for Emergency Use Authorization of vaccines compare to other countries.