One Domestic Case Announced, Restrictions on Group Dining to be Relaxed

ONE DOMESTIC CASE and five imported cases were reported at the Central Epidemic Command Center’s daily press conference today. This one case was reported in New Taipei and was not already in quarantine. Five deaths were also reported, which were all individuals with long-term conditions.

The one new case today has an unknown source of infection and was found when they were tested to visit someone in the hospital. It is not uncommon for new cases to be found this way. Both imported cases from today were vaccinated, but had not reached fourteen days after vaccination. 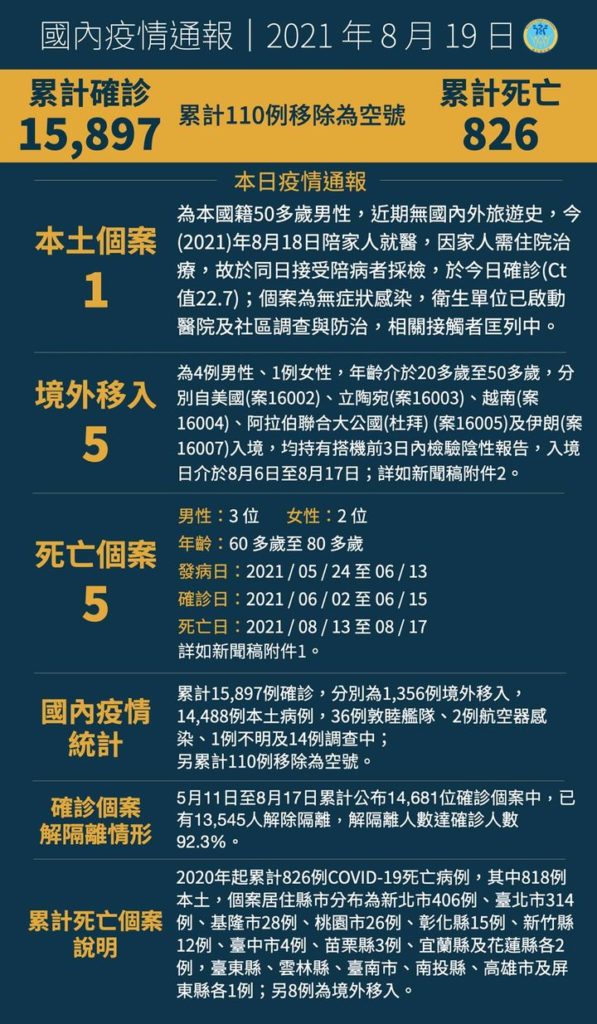 While there were news reports this morning that a new case had been found in connection to the Taipower Building cluster, this was later found to be a false positive through PCR testing. This new case originally prompted concern about undetected transmission chains in the building, seeing as this case worked on a different floor than the other cases.

In the meantime, no workers on the seventh floor of the Taipower Building that were not already in quarantine have been found to be positive for COVID-19. 2,550 tests of workers in the building are required to be completed by 11 PM today, so that they can be added to tomorrow’s case numbers. Variant testing will be considered for the Taipower Building cluster. As Taipower is Taiwan’s state-run energy utility, it is viewed as a key industry, and the Taipower Building is the company’s headquarters.

Although a new case was found in connection with the Taipower Building cluster, this case has not been listed and will be included in tomorrow’s count. This is not a case in the building, but is of a kindergartener that is the child of one of the cases. The kindergarten that they attend has been closed for three days for disinfection and they will be quarantined for fourteen days. 13 have been quarantined in connection with this case, who lives in Taoyuan.

Travel history for these cases will be announced by the local government, which the CECC leaves announcing case travel history to now.

Minister of Health and Welfare Chen Shih-chung took the opportunity to reassert measures for quarantine hotels, due to some violations of quarantine hotel measures. Individuals in quarantine hotels cannot go outside, unless there is an emergency, and cannot go onto their balconies without a mask. Garbage should be left outside of the hotel room, there are no cleaning services provided like with normal hotels.

The CECC was asked about accusations of a conflict of interest in the Medigen review process from the KMT, seeing as four members of the Advisory Committee on Immunization Practices were involved in research projects related to Medigen. Nevertheless, the CECC stated that this is different from the Food and Drug Administration that reviews approval of vaccines, and that these individuals had previously disclosed their involvement in the projects. 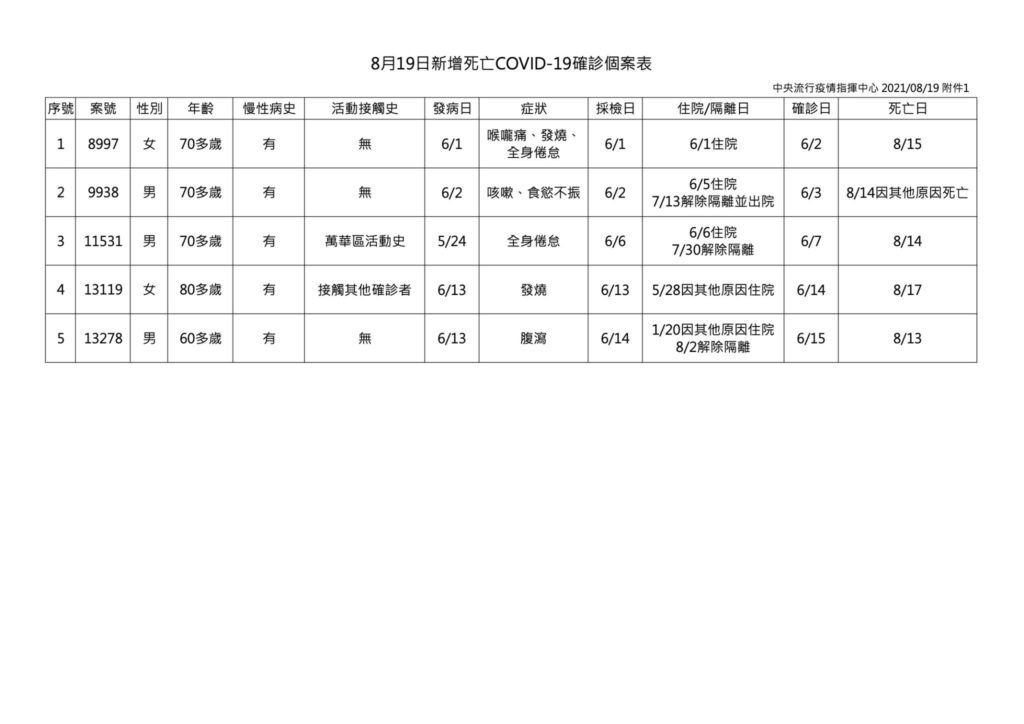 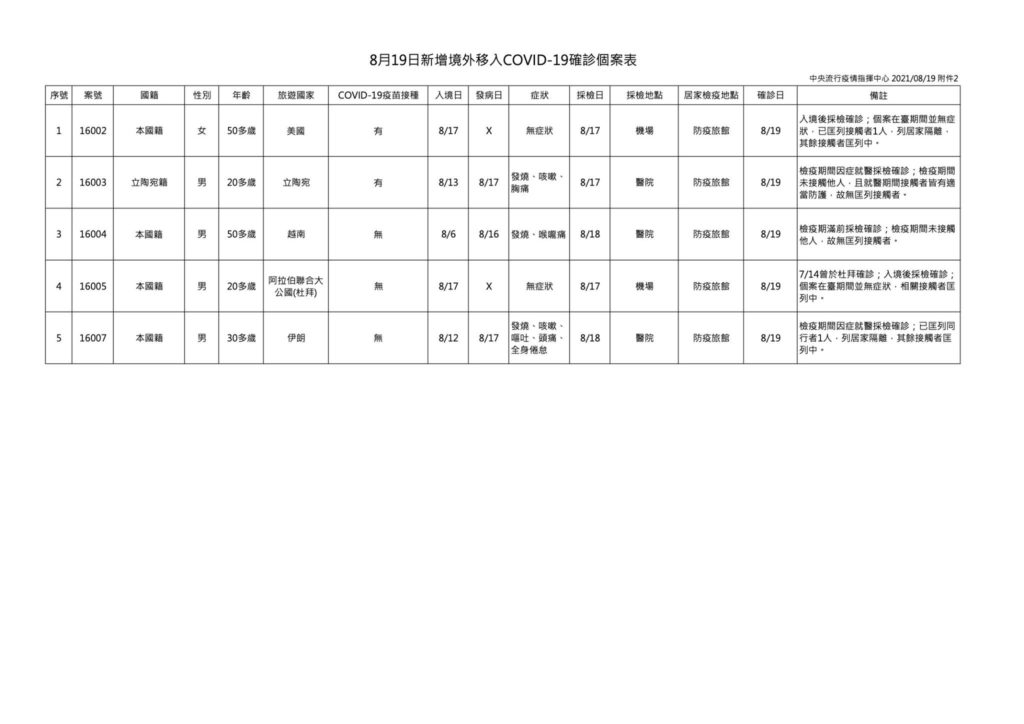 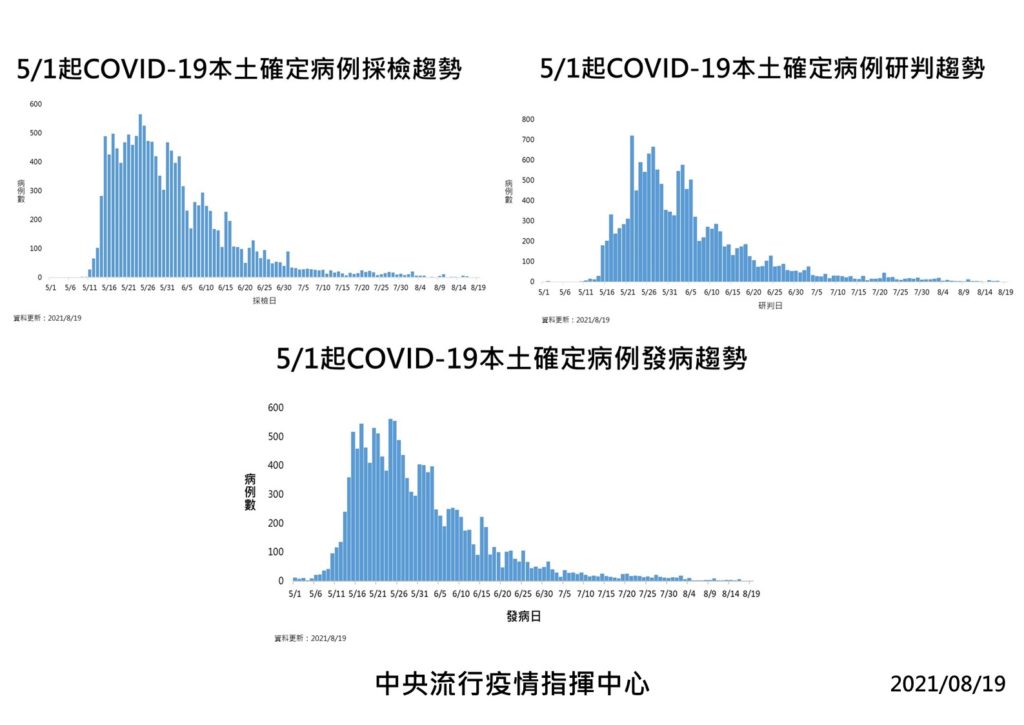 Information on the new deaths announced today (left), on the imported cases reported today (center), and further data released by the CECC (right). Photo credit: Ministry of Health and Welfare/Facebook

580,000 of 610,000 Medigen vaccines are ready to be used in the upcoming sixth round of vaccination. More may be added, if demand surpasses supply. 163,000 individuals between 20 and 35 have registered to be vaccinated with Medigen so far. Numbers released for Medigen to date are for the full vaccination of Medigen with two doses. Medigen vaccination will take place 28 days apart, as there is currently no data on the effects of extending vaccination periods for Medigen.

As the Mid-Autumn Festival is some time away, but the COVID-19 situation seems under control in Taiwan, the CECC is optimistic about relaxed measures then. The CECC will consult with the Ministry of Transportation and Communication about whether there is a need to reduce travel over the Mid-Autumn Festival, such as by decreasing the number of available trains.

According to New Taipei mayor Hou You-yi during the New Taipei COVID-19 press conference today, the one case in New Taipei today was in Xinzhuang. All family members tested negative for COVID-19, while just they tested positive. Hou criticized the central government, calling for more vaccine choices and for internationally recognized vaccines to be available for young people. Hou was also asked questions about the possibility of electoral cooperation with Taipei mayor Ko Wen-je in a 2024 presidential run or if New Taipei deputy mayor Liu He-ran would run for New Taipei mayor if Hou ran for president.

Teachers, kindergarten workers, and workers at long-term care facilities are currently required to have negative PCR tests if they are not vaccinated.

Chen stated that the CECC would release more information when available about the arrival of BioNTech vaccines, when asked about reports that one or two million vaccines would arrive by the Mid-Autumn Festival. As Moderna vaccines were approved for use by individuals between 12 and 17 yesterday, Moderna and BioNtech vaccines can be used to vaccinate this age demographic, but the CECC doesn’t prioritize one vaccine over another when it comes to this, even if it is anticipated that BioNTech will be primarily used to vaccinate this group due to lacking Moderna supply.

There were 78 adverse reactions to vaccinations yesterday, with 40 non-serious reactions, two deaths after AstraZeneca vaccination, and 36 other reactions. 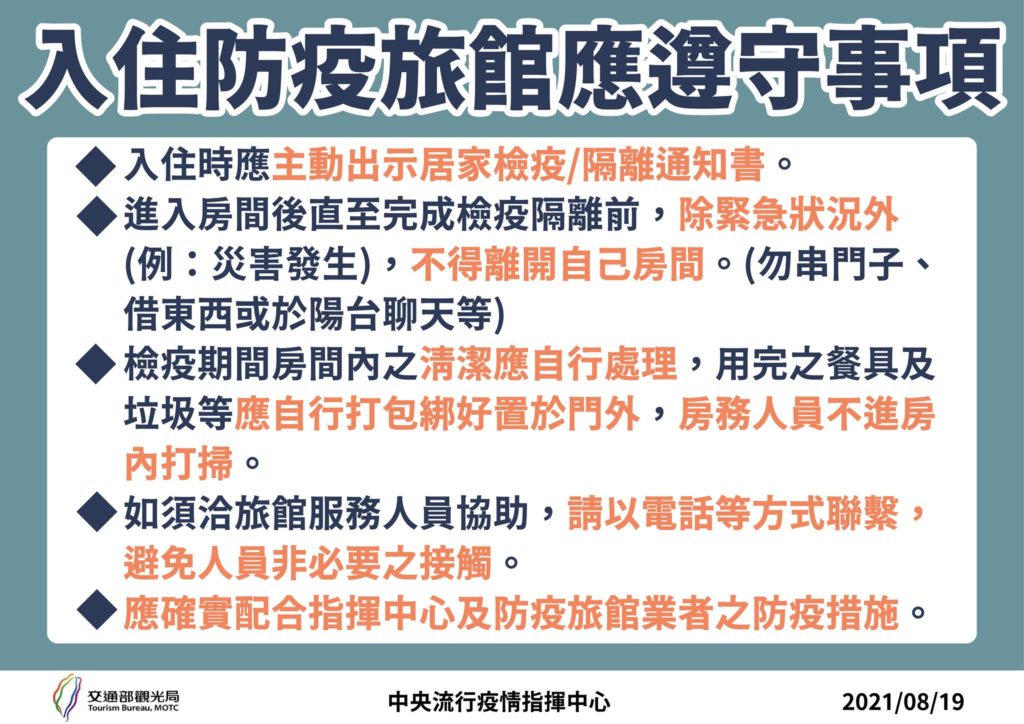 Information on regulations for quarantine hotels. Photo credit: Ministry of Health and Welfare/Facebook

The CECC is considering relaxing regulations on outdoor dining and for individuals that live together to be allowed to eat together without barriers when eating together after August 24th. The CECC stresses safety, in that people who want to eat together can otherwise stay at home to do so, but also common sense. Chen brought up a case he had heard of a restaurant that required a four-year-old to have their own hot pot, because of regulations stipulating that there is one individual per hot pot at restaurants. New Taipei stated that it would evaluate the CECC’s measures before deciding whether to comply.

When asked about the possibility of extending quarantine periods, the CECC states that while Delta may have increased transmissibility, reports do not currently indicate that it has a longer incubation period which would require this.

Chen Shih-chung met with American Institute in Taiwan (AIT) director Sandra Oudkirk yesterday. The two discussed vaccines, Taiwan’s exclusion from the World Health Organization, cooperation on supply chains for medical supplies, and the international recognition of Medigen. AIT is the de facto diplomatic representative of the US in Taiwan, in the absence of formal diplomatic relations.