Six Domestic Cases Announced, 2,550 To Be Tested in Connection with Taipower Building Cluster

SIX DOMESTIC CASES and five imported cases were reported at the Central Epidemic Command Center’s (CECC) daily press conference today. None of these cases were already in quarantine, though some cases were under self-health management. No new deaths were announced.

Four cases were in Taipei and two were in New Taipei. 90.1% of cases to date have been released from quarantine.

Three of the cases in Taipei were found among workers in the Taipower Building. Two of the cases were found on the same floor, while another case was on a different floor, though the source of infection is known for this case and the two cases on the same floor are considered a cluster. The floor where the cases were found is being PCR tested and has been disinfected, with the CECC recommending that the entire building be tested. As a result, over 80 have been put in quarantine hotels in connection with the Taipower Building cluster and 2,550 will be tested today, but results have not yet come in. Only half of workers were required to come into work today, with the floor where the infections were found being asked to stay at home for a week, and the floor closed for three days. 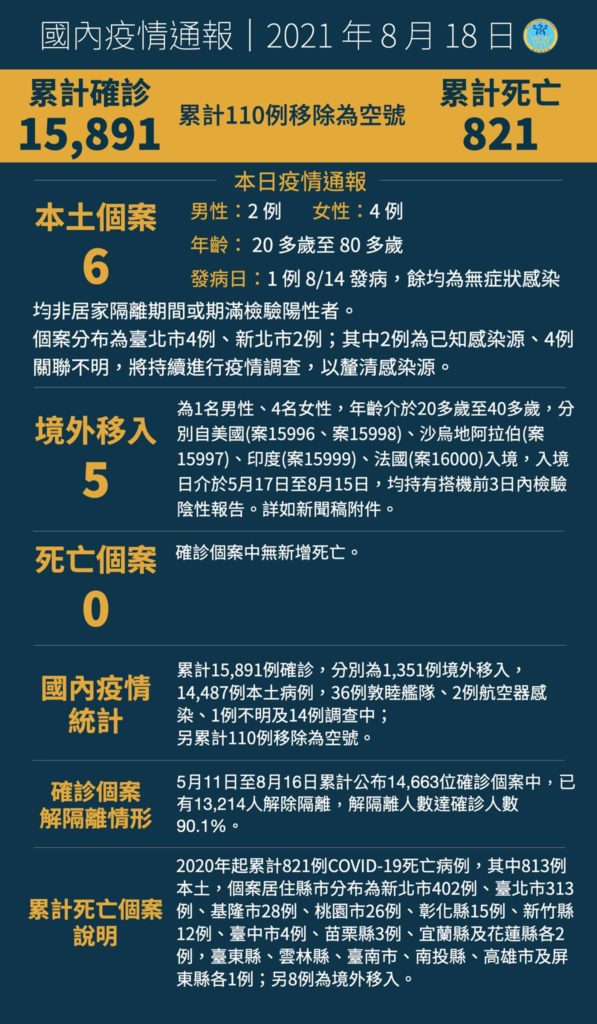 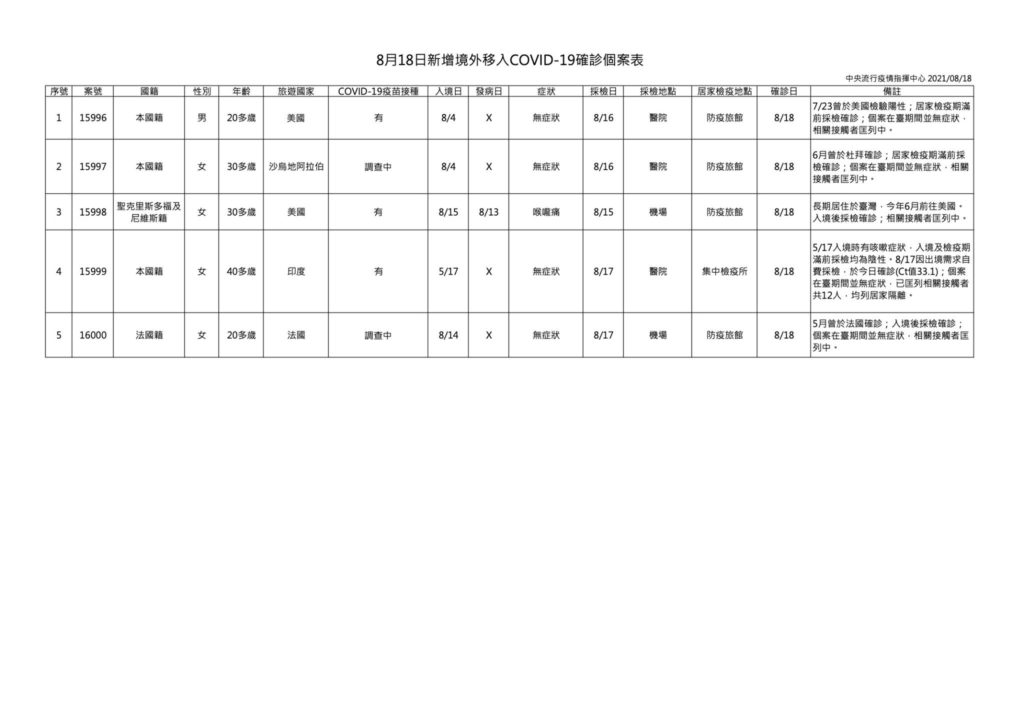 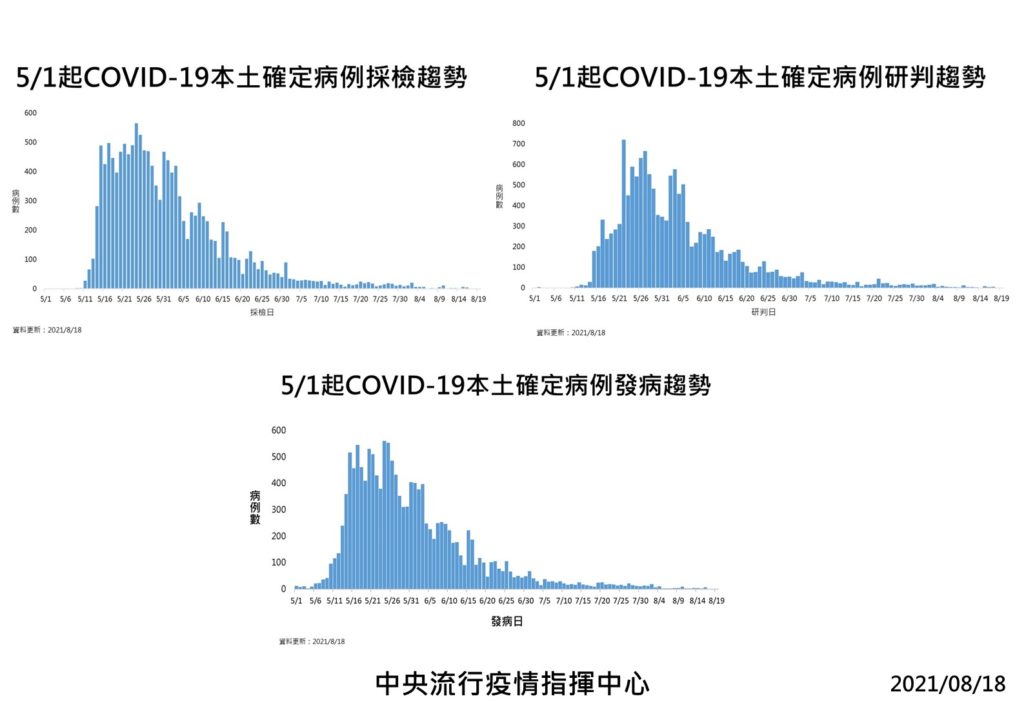 Information on the new cases today (left), on the imported cases reported today (center), and further data released by the CECC (right). Photo credit: Ministry of Health and Welfare/Facebook

The Taipower Building cluster includes a pregnant woman who had two doses of Moderna, but did not reach a full fourteen days after vaccination, who had light symptoms. There have been nine breakthrough cases domestically of individuals who were fully vaccinated and reached fourteen days after vaccination. Three of these cases were found to have the Delta variant, while the variant could not be confirmed. Five of the nine breakthrough cases had symptoms, while the rest were asymptomatic.

One of the imported cases previously entered Taiwan in May and was coughing during this time, but tested negative then.

Regarding reports that children between 0 and 3 years old may be more transmissible, the CECC stated that this may be due to closer contacts with children. At the same time, there have not been enough cases of transmission among children in Taiwan to have a conclusion regarding this domestically, which may also be due to the fact that the primary variant found in Taiwan is the Alpha variant. The CECC stressed that unvaccinated people are still the most likely to spread COVID-19.

There have been seven cases of blood clots reported after AstraZeneca vaccination so far. 527 individuals have applied for compensation for reactions after vaccination, though no applications have been approved yet, and they are being evaluated.

The CECC went over the list of countries requiring vaccination for entry at the press conference today, as well as which countries require quarantine periods after entry. Most countries only require negative PCR tests. 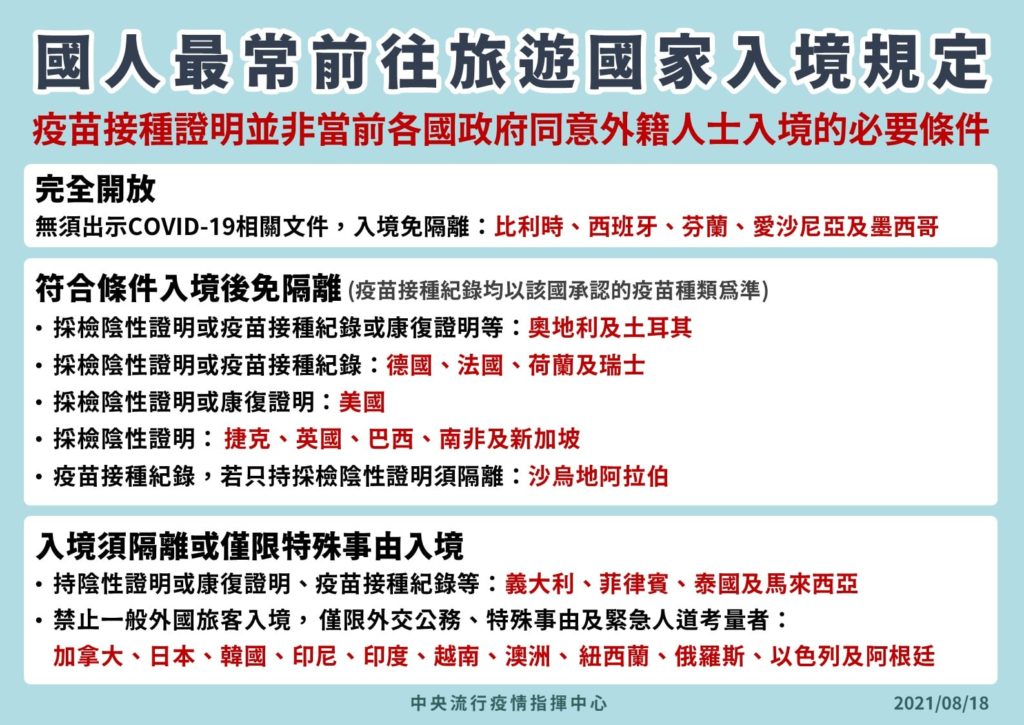 Information on regulations for inbound travelers for foreign countries. Photo credit: Ministry of Health and Welfare/Facebook

Vaccination for teachers has been done through lists drawn up by relevant institutions. The first wave consisted of 290,000 individuals, with 373,696 added in August. Of these, 327,991 were vaccinated, bringing vaccination to 87.77%. 73,000 names were later added and vaccinations for teachers will continue in preparation for the new semester.

Testing by the National Taiwan University on mixed vaccination is conducted in cooperation with other institutions and is still undergoing.

When restrictions on cram schools will be lifted will be discussed with the Ministry of Education.

According to Taipei mayor Ko Wen-je, apart from the Taipower Building cluster, another workplace case was found in Beitou, linked to a cluster among group travelers to Hualien. 112 have been tested in connection with this case, with 106 put in quarantine hotels. Taipei believes that the cluster can be treated with regular procedures and that there is no need for Wang Bi-sheng of the CECC to step in yet. 1,531 tests at neighborhood testing stations in Taipei found zero cases yesterday, with around 300 in home quarantine currently. Ko again asserted that Wanhua is no longer a hotspot and that cases were declining in Taipei currently. 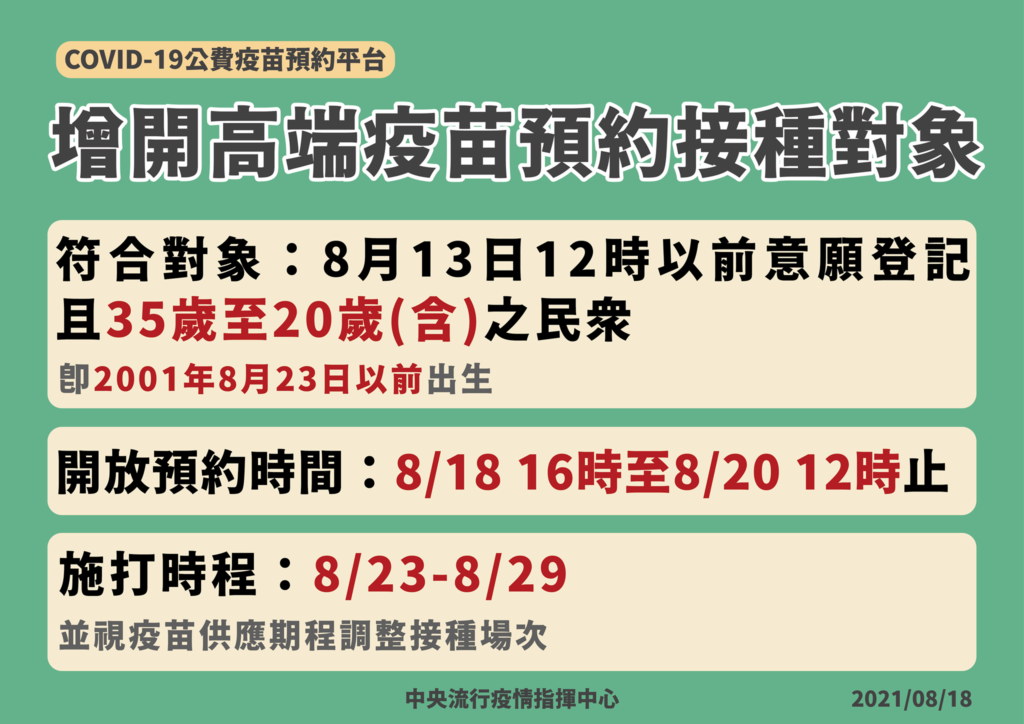 Information on the extended and expanded vaccine registration for the sixth round of vaccination, which is mostly Medigen. Photo credit: Ministry of Health and Welfare/Facebook

Ko expressed concerns about cases breaking out at office buildings in the future, urging work from home when possible, and pointing to hot water machines where individuals take off their masks, drink water or tea, and chat as an issue. As such, Ko also urged spacing between office workers. Taipei will treat more than two cases as a cluster, with work required to stop for three days and all nearby workers home quarantined.

Ko urged the elderly to be vaccinated, citing that Taipei has experienced no deaths under 30 yet, while deaths are higher for those above 50 years old. Ko stated that, like the US, the death rate in Taiwan decreased once medical capacity stabilized. 51.6% of residents have received one dose of vaccine in Taipei so far, while 5.3% have two doses of vaccine. Registration for second dose vaccinations can take place through the online vaccination registration system or at convenience stores, pharmacies, the NHI system, or TaipeiPASS, Taipei touting that TaipeiPASS already had information on Taipei residents.