Four Domestic Cases Announced, Digital Platform for Vaccination Proof to be Rolled Out

90% of cases to date have been released from quarantine. Of the imported cases from today, nine were from Myanmar, two each from the US and UK, and one each from Australia and Austria. The nine cases from Myanmar were taishang that normally live there, but were returning to the country. Four had been vaccinated, though only two had reached the full fourteen days after vaccination. While the results of testing for variants is announced every Friday, three variant cases have already been found, and the relevant cities where these cases are being quarantined have been notified. 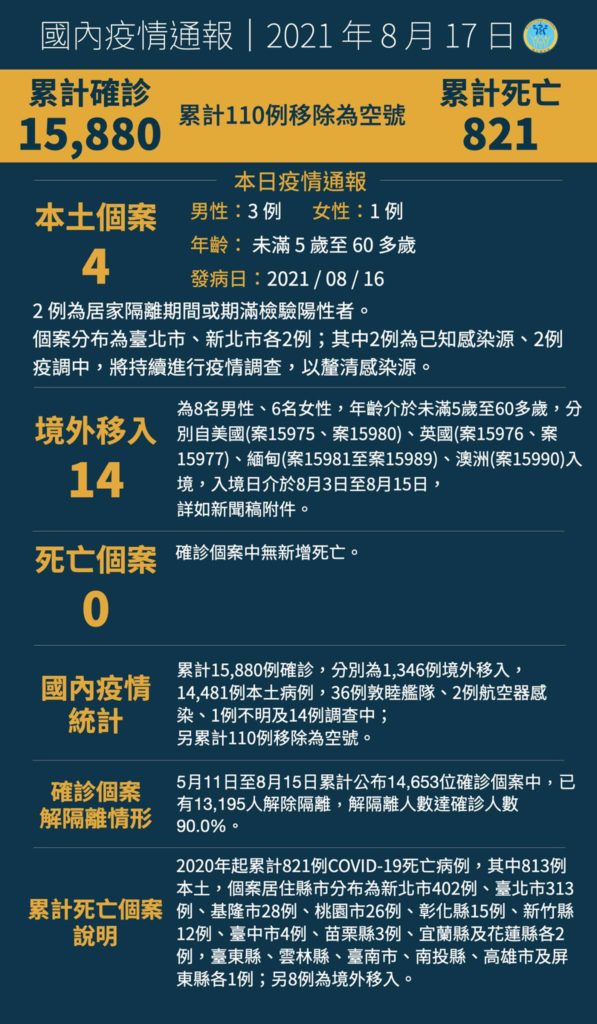 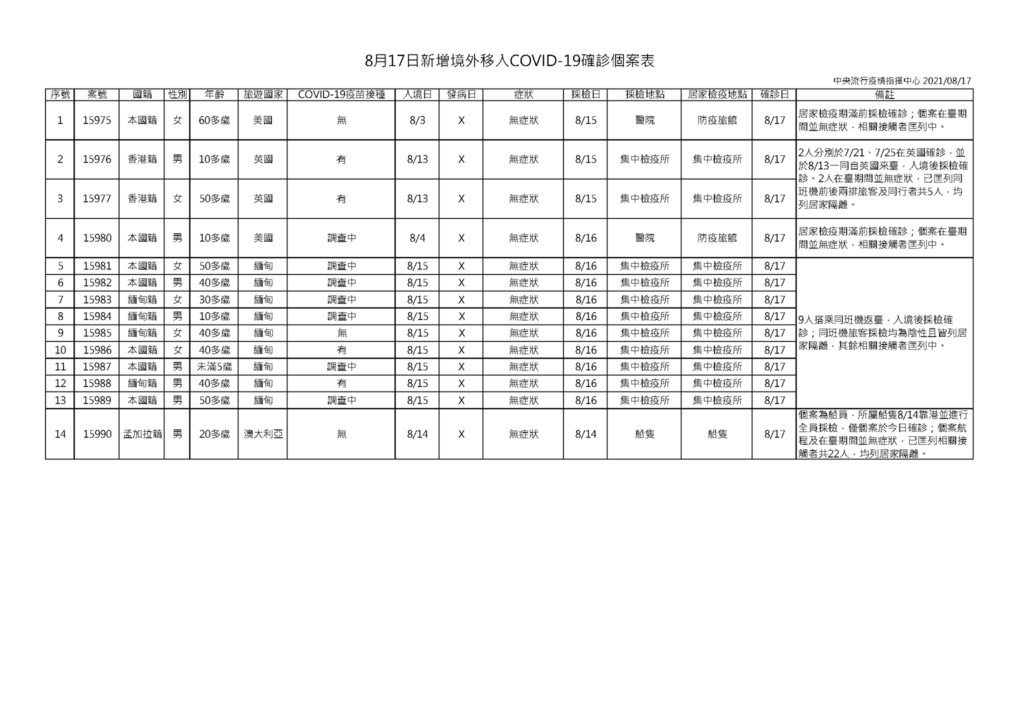 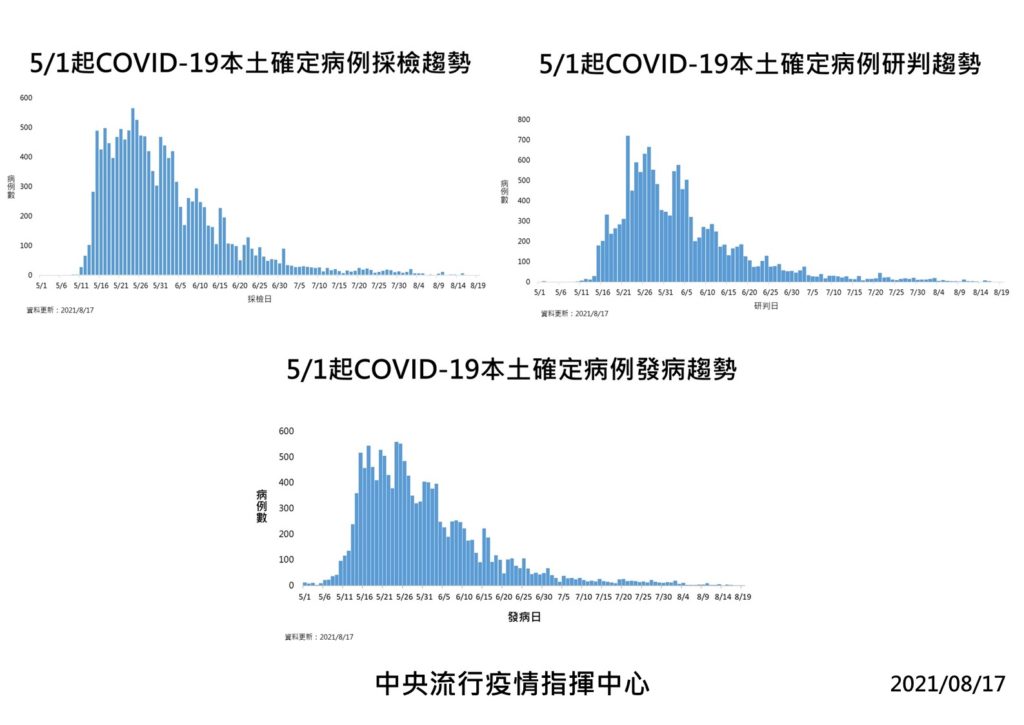 Information on the new cases today (left), on the imported cases reported today (center), and further data released by the CECC (right). Photo credit: Ministry of Health and Welfare/Facebook

Minister of Health and Welfare Chen Shih-chung emphasized during the press conference today that the currently available vaccines in Taiwan do not contain pork and so should not create issues for religious dietary concerns.

Over 390,000 have registered appointments to be vaccinated with Medigen. Chen urged those who have not yet made their appointments for vaccination to go and do so, since appointments can be made until tomorrow.

Two cases have been found in the Taipower Building, one of which was detected in the past day. The building has undergone disinfection and 30 have been quarantined. Measures are stricter for dealing with the few cases that occur in Taiwan now, but there is concern about insufficient measures.

A number of questions today at the daily press conference centered around the Food and Drug Administration’s decision to refuse an Emergency Use Authorization (EUA) for domestically developed United Biomedical vaccines. United Biomedical has sought to appeal this decision and provided the necessary documentation. That being said, there are no plans to publicize the records of the oversight meeting for the vaccine or what the statistics for the decrease in efficacy when dealing with the Delta variant are because the EUA did not pass, unless United Biomedical is willing to publicize this themselves.

BioNTech vaccines will be incorporated into the vaccine registration system when they arrive in Taiwan. Mixed vaccination standards will be set then as well.

According to New Taipei mayor Hou You-yi, one of the two cases in New Taipei today was already in quarantine, with the case that was not being in Banqiao. All contacts so far have tested negative. 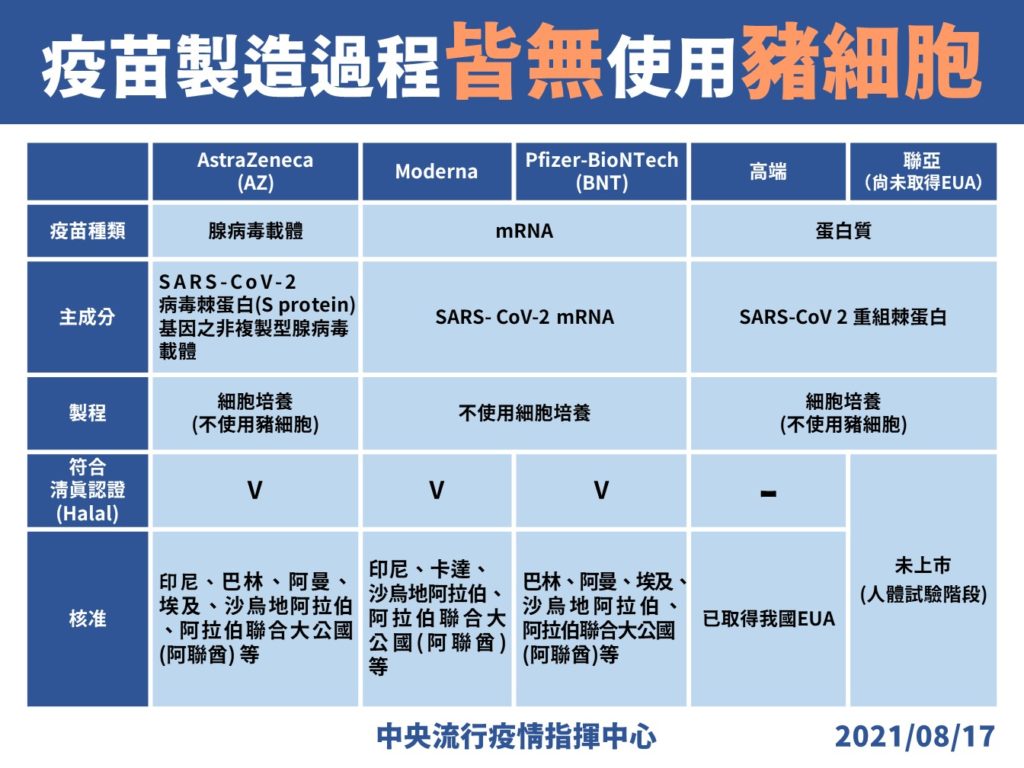 Information on the ingredients of currently available vaccines in Taiwan. Photo credit: Ministry of Health and Welfare/Facebook

As Taipei plans to reopen exercise facilities on August 24th, New Taipei will coordinate with Taipei in how it does this. Inspections of crane claw machine stores regarding their implementation of COVID-19 measures will be conducted by the New Taipei city government. Hou also called for the vaccine approval process to offer clearer indication of how Taiwanese vaccines will win international approval, in order that they do not affect the ability of Taiwanese to travel.

There are plans to roll out a digital platform for proof of vaccination. A meeting of experts was convened yesterday, though the CECC has not reached a decision on what to call this platform. The CECC will wait until vaccination coverage is higher, with vaccination coverage still beneath 50% at present in Taiwan. When asked if individuals returning from Palau will have vaccine passports, the CECC responded that vaccine passports have not been rolled out yet.

Chen believes that more vaccines will arrive in time. The CECC does not rule out making more vaccine purchases next year, though Taiwan has already purchased an ample supply of Moderna.

The distribution of stimulus vouchers is planned for when the COVID-19 situation is more stable.