Minister of Health and Welfare Chen Shih-chung stated that he believed that contact tracing would hopefully quickly clear up the source of infection for the case that was not in quarantine. The three cases from today consisted of two cases in New Taipei and one case in Taipei. 90.2% of cases to date have been released from quarantine. 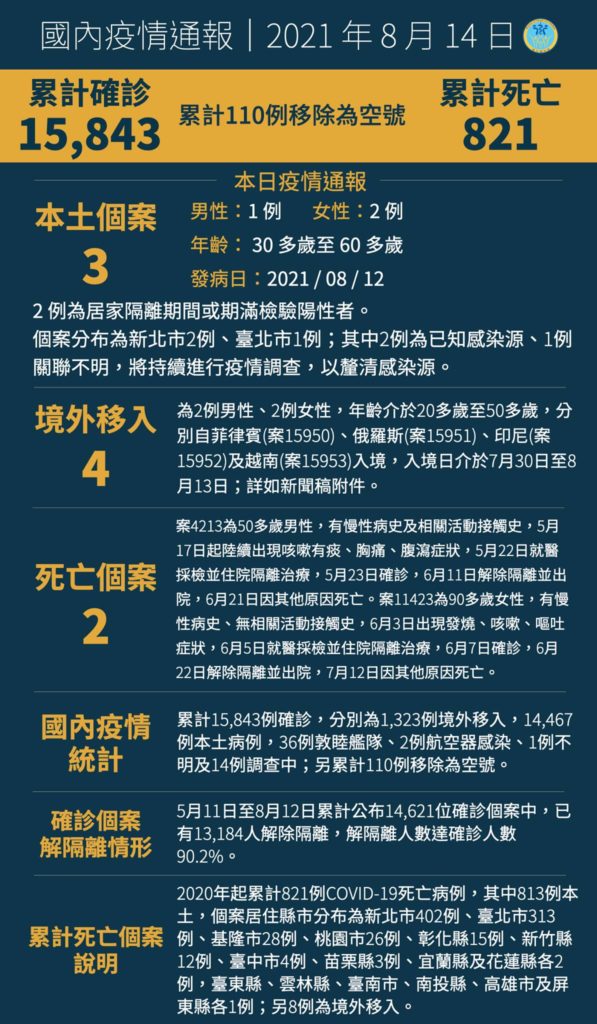 If Taiwanese citizens get vaccinated in the US or Palau, proof of vaccination will be issued at time of vaccination. Proof of vaccinations from abroad will be acknowledged for vaccines with Emergency Use Authorization in Taiwan. PCR tests will be carried out for individuals returning from Palau.

An airline worker infected at Taoyuan International Airport is thought to be a case of domestic transmission, due to only having been at the airport a short time.

Some conditional reopenings for swimming pools at tourist sites may take place, but further discussion will need to take place with the CECC.

According to the CECC, the Lambda variant of COVID-19 does not seem to be more transmissible than the Delta variant. Likewise, when asked, the CECC emphasized that blood clots are rare after vaccination. The main COVID-19 variant in Taiwan is still the Alpha variant.

When asked about foreign teachers requiring vaccination, the CECC stated that they can register online for vaccination. 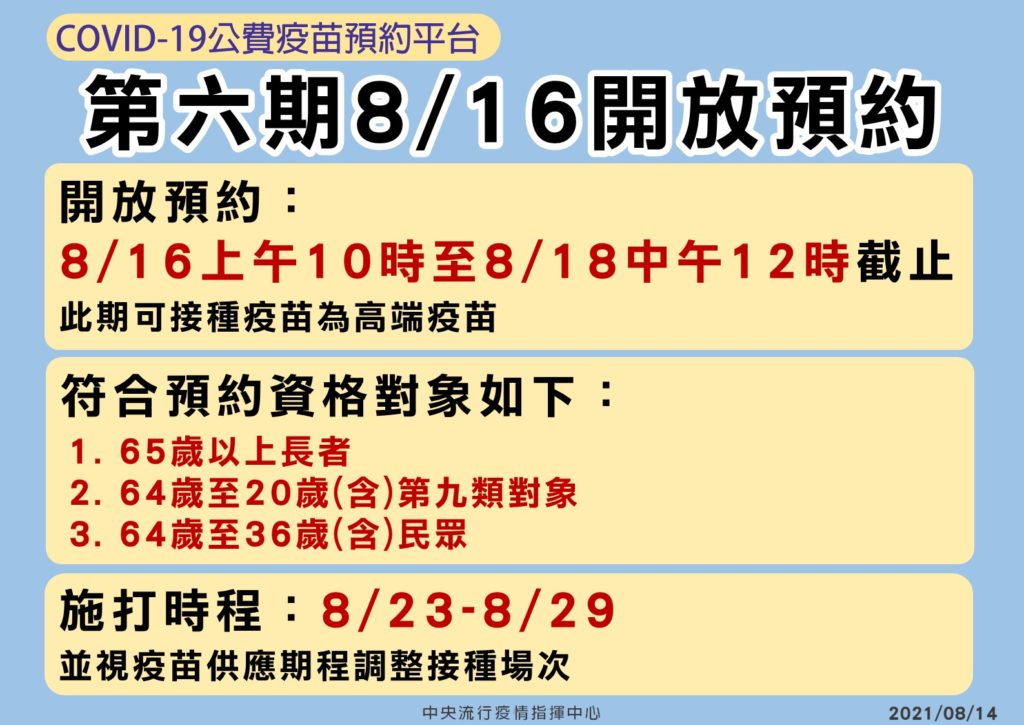 Information on the upcoming sixth round of vaccination. Photo credit: Ministry of Health and Welfare/Facebook

Former student leaders of the Wild Lily student movement have announced a campaign in support of domestically manufactured vaccines.

According to former Premier Su Tseng-chang, the Executive Yuan is leaning in the direction of not requiring payments of 1,000 NT before issuing 5,000 NT stimulus vouchers now. This change was announced yesterday and has been perceived as an abrupt policy reversal by some.

A man who killed a woman while speeding, expressing little remorse about the incident, later issued a death threat to Chen Shih-chung.

A case of an airport worker at Taoyuan International Airport who was found to be positive for COVID-19 and previously suspected to have potentially been infected by inbound travelers had not worked at the airport in some time and is suspected to be linked to a domestic cluster.

According to New Taipei mayor Hou You-yi, both cases in New Taipei today were already in quarantine. Both were in Shulin.

With concerns about undetected transmission chains in the neighborhood after an apartment cluster was found in Yonghe, 1,679 tests conducted between August 9th and August 13th only found two cases, who live together. This does not change the number reported yesterday. Hou continued to call on members of the public to be tested.

According to Taipei deputy mayor Huang Shan-shan, who led Taipei’s press conference today, the one case found in Taipei today had an unclear source of infection. This case, who was in Zhongshan, had a large number of contacts from work. 65 individuals have been quarantined, while 22 are on self-health management. Testing has found twelve negative cases so far. Huang expressed concern about the B.1.621 case that was found and that imported cases are surpassing domestic cases in number now. 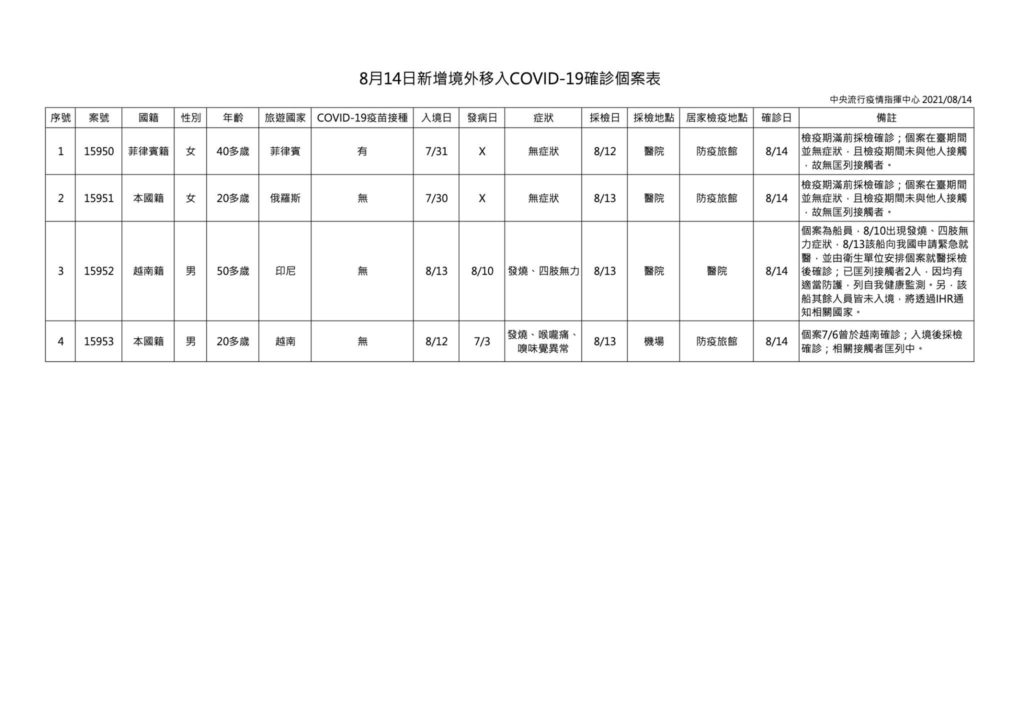 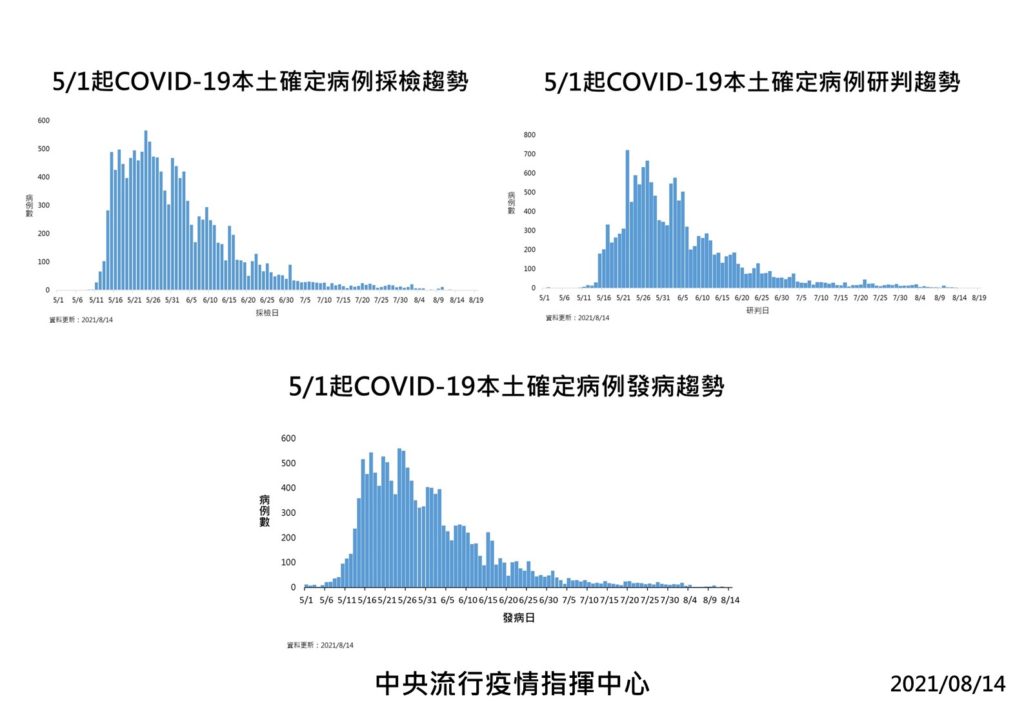 Information on the imported cases from today (left) and further data released by the CECC (right). Photo credit: Ministry of Health and Welfare/Facebook

Huang stated that the number of cases in Taipei has halved since last week, and it is hoped that cases will continue to halve every week. The number of individuals in quarantine is up to 311 from 200, due to the contacts from this case today. 1,397 tests yesterday found no new cases, but Taipei does not rule out continued transmission chains in the community.

A new policy is being rolled out that if elderly individuals or individuals with long-term underlying conditions are found to be positive with COVID-19 in quarantine facilities, they will be sent to hospitals, due to the fact that hospital capacity is sufficient now. According to regulations from the central government, cash awards will be issued for 25 workers that assisted individuals going to be tested, who were later found to be positive with COVID-19, and provided for their confirmation on the National Health Insurance system. Taipei will prioritize affected industries for stimulus measures, rather than general stimulus measures, stating it needs definite policy from the central government to come up with its own policy.

Huang stated that Taipei was not in attendance for meetings regarding the Palau travel bubble, with Taipei mayor Ko Wen-je has alleged was a hole in COVID-19 prevention measures.