FOUR DOMESTIC CASES and two imported cases were announced by the Central Epidemic Command Center (CECC) at its daily press conference this afternoon. Two cases have unknown sources of infection and must be investigated. There were three cases in Taipei and one case in New Taipei. 89.9% of cases to date have been released from quarantine.

One death was announced. The one death was a man in his 80s, who had long-term conditions and was undergoing dialysis. 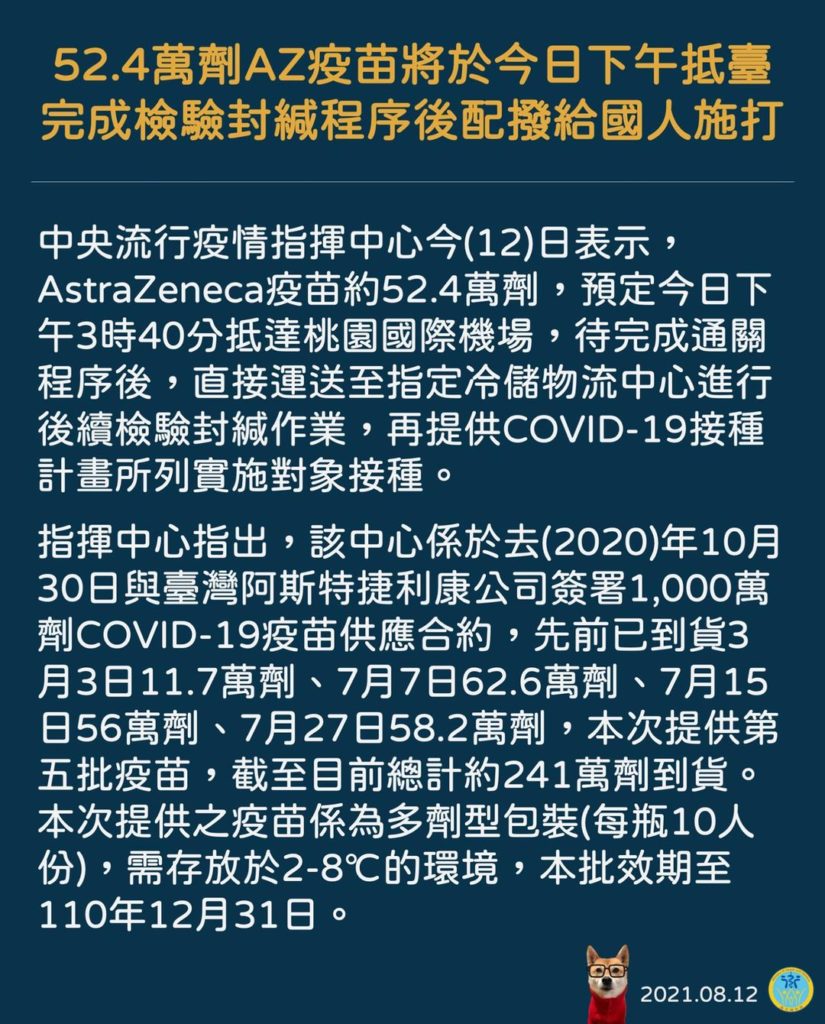 Announcement of the vaccine shipments. Photo credit: Ministry of Health and Welfare/Facebook

524,000 AstraZeneca vaccines arrived this afternoon from vaccine purchases by Taiwan. These will be distributed after quality control inspection, which is expected to take one week. These vaccines expire on December 31st.

The 524,000 vaccines will likely be used by expanding age groups eligible for vaccination, though this is to be discussed. Likewise, according to Minister of Health and Welfare Chen Shih-chung, it is possible other AstraZeneca vaccines will arrive. Distribution plans will keep this in mind. Chen stressed that vaccine shortages apply to all brands and do not specifically apply to one vaccine brand or another.

Second dose will be conducted for individuals in need of it. The CECC does not rule out extending the period between first and second dose vaccination to more than twelve weeks, depending on supply.

Special plans can be considered for vaccinating foreign personnel in critical industries for Taiwan. Some are underway. 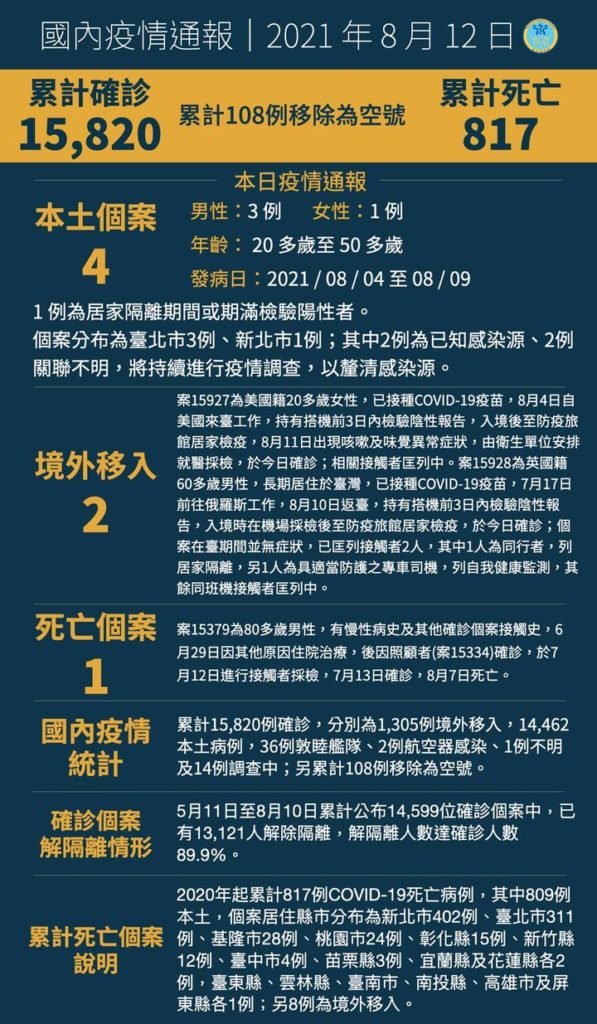 Chen emphasized that the CECC is not forcing anyone to be vaccinated, but that it encourages vaccination. Similarly, members of the public can decide based on the information available to them which vaccines they hope to be vaccinated with.

Chen was asked about comments by US Senator Tammy Duckworth in which she referred to the US donating four million vaccines to Taiwan, causing speculation about further vaccine donations by the US seeing as the US has only donated 2.5 million vaccines. This was later stated to be a gaffe. According to Chen, who thanked the US in his comments, there has been no news of further vaccine donations from the US from the Ministry of Foreign Affairs.

Dormitory-style long-term care institutions are now open, except for in greater Taipei. This is because greater Taipei is considered a high-risk area. PCR testing must take place at these facilities and visitors cannot exceed three people.

The CECC will provide compensation of 500,000 NT to 600,000 NT to the family members of individuals that died after vaccination. Around 400 cases are under investigation as to whether this compensation will be provided. Autopsy results will be used to decide whether funds are to be distributed.

The Ministry of Transportation and Communications will make arrangements for foreign students that need to enter Taiwan in time to avoid missing midterms, if they are still in quarantine. 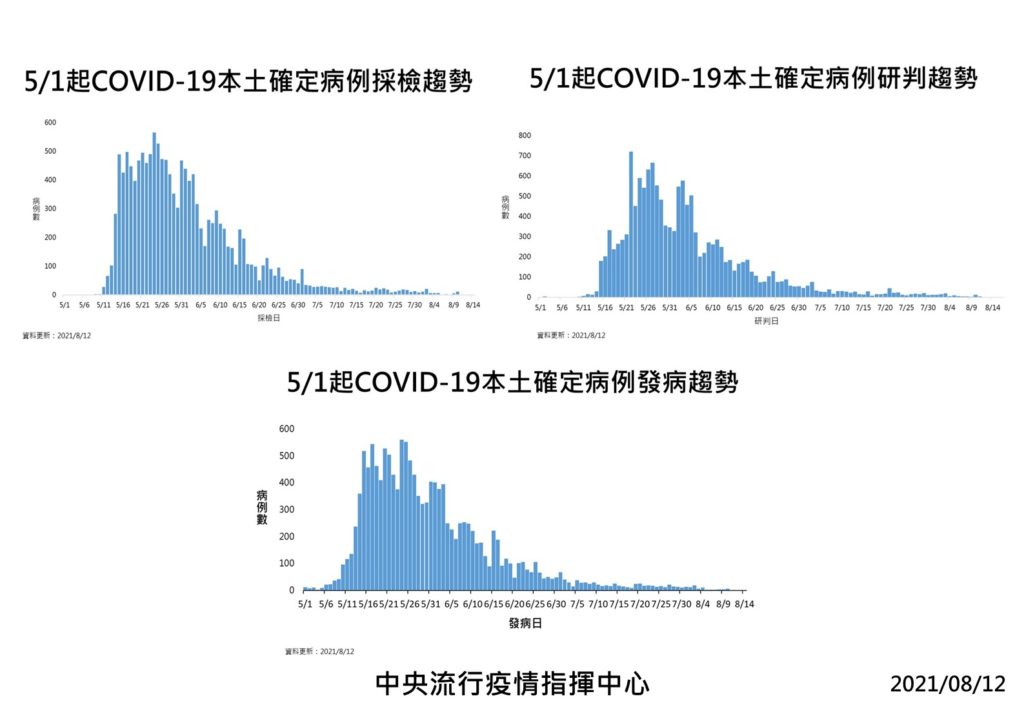 For the Palau travel bubble, the specific COVID-19 prevention measures will depend on which destinations are part of the trip. Palau is mostly vaccinated and has had no domestic cases to date. Nevertheless, PCR testing required and self-health management will be required from travelers after they return to Taiwan. Other details for the travel bubble are being finalized.

Taipei mayor Ko Wen-je did not hold a press conference today, despite Taipei having the most cases. According to New Taipei mayor Hou You-yi, the one case found in New Taipei today was already in quarantine. 70 residents of a building in which several COVID-19 cases were found in two weeks have been sent to centralized quarantine facilities, due to being unable to maintain one individual per room in their residences. 236 have been put under home quarantine. When asked about Kaohsiung mayor Chen Chi-mai sending all residents of an apartment building to quarantine facilities for a similar set of cases in Kaohsiung, New Taipei stressed that it was implementing mutually agreed upon measures.