TWELVE DOMESTIC CASES and four imported cases were announced by the Central Epidemic Command Center (CECC) during its daily press conference today. Five of these cases were already in quarantine. Seven cases had known sources of infection, three have unknown sources of infection, while two cases are under investigation. Two deaths were also announced. This is slightly up from the past week, which saw four consecutive days of cases in the single digits. 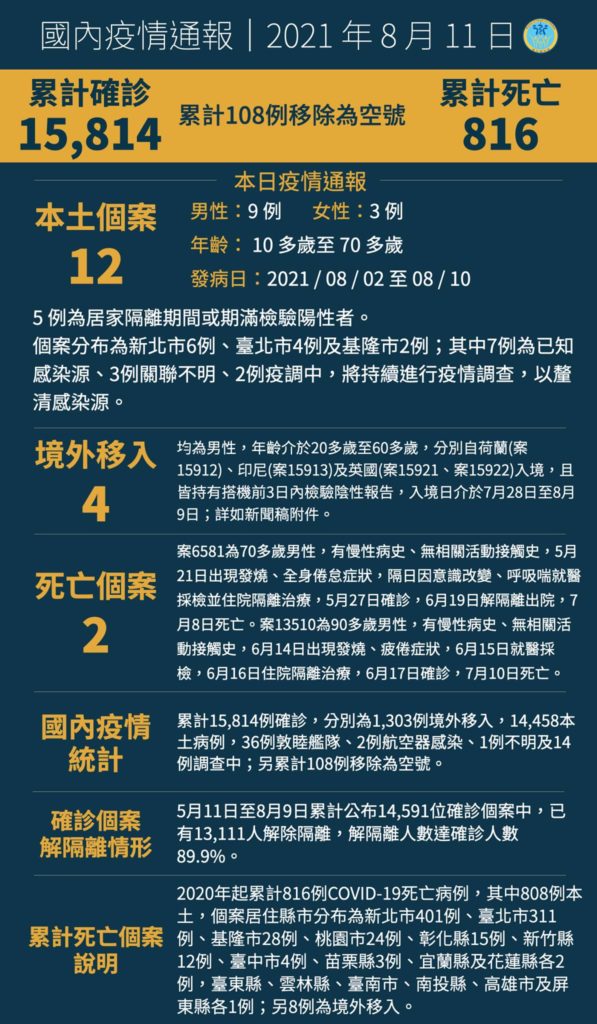 The travel bubble from Palau will soon resume. Though an exact date was not confirmed, when asked, Minister of Health and Welfare Chen Shih-chung stated that he had also heard a similar time frame to reports that this would resume on August 14th. As with before, PCR tests will be required before and after travel to Palau, with travelers primarily staying in travel groups and needing to wear masks. Chen urged respect for that Palau has not reported any domestic cases to date in the course of the pandemic.

When asked about South Korea sending diplomatic representatives to the US to request faster delivery for vaccines, Chen stated that Taiwan has no plans to currently do this. Instead, Taiwan will be represented by Hsiao Bikhim, Taiwan’s representative to the US, and will conduct dialogue through the American Institute in Taiwan, the US equivalent of an embassy in Taiwan in the absence of diplomatic relations.

Funds for vaccination subsidies will soon be distributed to hospitals. Information on vaccinations that took place from March 22nd to June 30th was sent out to the National Health Insurance Administration (NHIA) on August 9th, the funds will be dispersed on August 12th, and the NHIA will send funds to hospitals on August 16th. It is expected that this process will be faster in the future.

The CECC currently hopes to accumulate 800,000 doses of Medigen that have passed through the inspection process before they are distributed to be used. This is currently at around 600,000 doses. Around 1,060,000 are currently willing to be vaccinated with Medigen. There are no plans to change the vaccination order as Medigen vaccines start to be used.

The CECC does not view the number of cases in China currently as at a level requiring the escalation for measures for inbound travelers from China. Namely, cases in China are still in the hundreds. As the Delta variant does not have a longer incubation period than other COVID-19 variants, statistics for individuals with the Delta variant under quarantine are not disaggregated but may be done so in the future. There are 290 patients in hospitals currently for COVID-19.

32,000 or so vaccinations took place yesterday, with fewer vaccinations taking place due to this being at the end of a vaccination period. Vaccination coverage is now at 37.18%, which increases to 39.48% per 100 people. 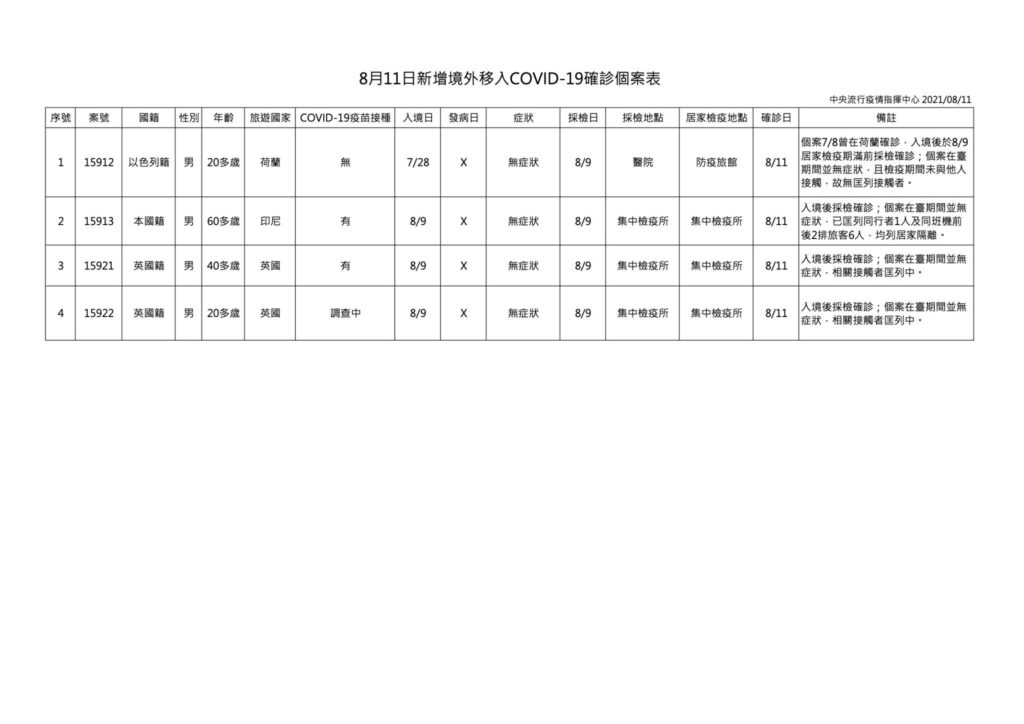 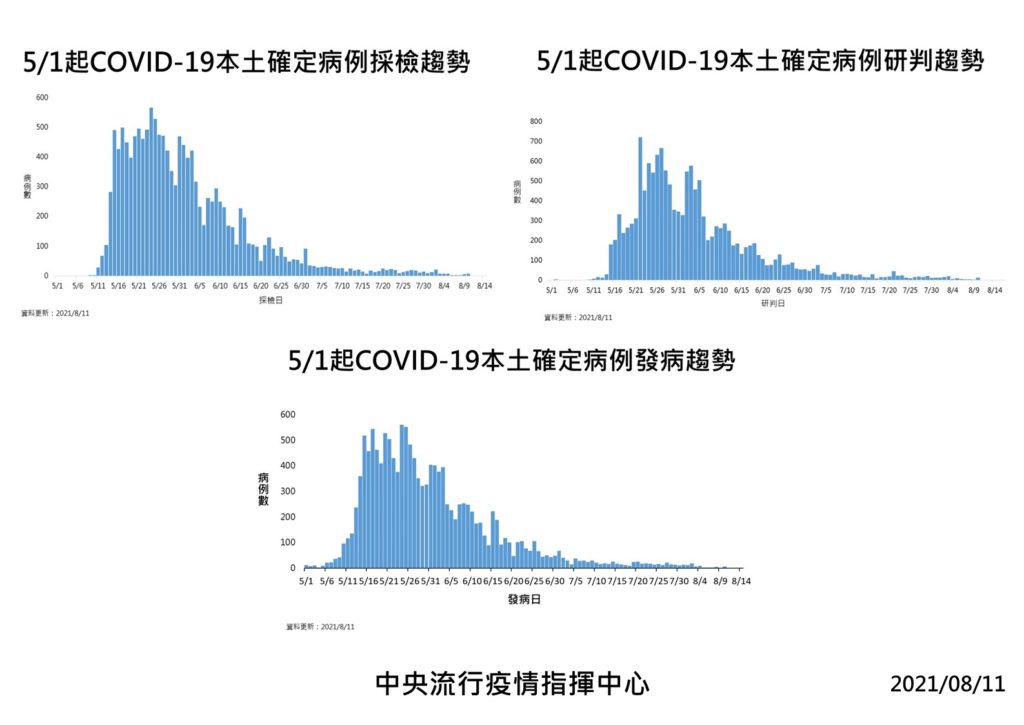 Information on the imported cases from today (left) and further data released by the CECC (right). Photo credit: Ministry of Health and Welfare/Facebook

According to the CECC, research results presented by National Taiwan University using information from abroad suggest that there are not dangers to having more than twelve weeks between vaccination. The CECC will consider what decision to make based on supply.

The Ministry of Education is evaluating what decisions to make with regards to international students, though it will consult with the CECC regarding COVID-19 prevention measures. Quarantine measures will be maintained for fully vaccinated returning students in the event of breakthrough cases.

The CECC does not approve of using vaccine passports to restrict movements, given human rights concerns, though it believes that using them to encourage vaccination can be considered. A meeting with human rights groups, legal experts, and others will be convened to discuss the issue on Monday.

The CECC is certain that more vaccines will arrive before the end of the year, though it cannot confirm the timeline. 20 million Moderna vaccines have been purchased for next year, which the CECC believes will be sufficient.

A building with three COVID-19 cases in two weeks had all residents tested, finding two more cases. One of these cases was a friend of a previous case, another was a family member, and one case has an unknown source of infection. New Taipei will provide assistance for these cases, including regarding food service for individuals under home quarantine.

According to Taipei mayor Ko Wen-je, two of the four cases today were already in quarantine. Two cases had unclear sources of infection. 1,627 tests yesterday found no new cases. First dose vaccination rate at Taipei is 49% and at 4% for second dose vaccination. There was some disorder today at the Taipei Expo Center, due to the current round of vaccination being mostly Moderna vaccines, and people arriving early for their vaccination because they feared not being vaccinated.

Ko stated that he believes that for Taiwan to get back to zero cases, this requires 28 consecutive days in a row with zero cases. Ko also expressed the view that there may be another wave of COVID-19 in the winter, based on precedents elsewhere. Likewise, Ko expressed the view that Taiwan had a higher number of deaths at the start of the outbreak, but that this would go down now, similar to other countries—this despite having attacked the CECC on the issue in the past and accused the CECC of lying when it claimed this.

If current trends hold, measures will continue to be relaxed. Restrictions on visitors on some outdoor areas will be relaxed to 100. Libraries will be increased to 40% from current restrictions limiting up to 20% capacity. Taipei Zoo is allowed to have 6,000 visitors, which is increased from 3,600. Taipei Children’s Amusement Park to allow for 2,400 visitors and Taipei Astronomical Museum to allow for 900 visitors, up from current limits of 450. Parent-child centers allow for up to 50 visitors, community centers for children require reservations ahead of time, and child centers are restricted to 50% capacity. 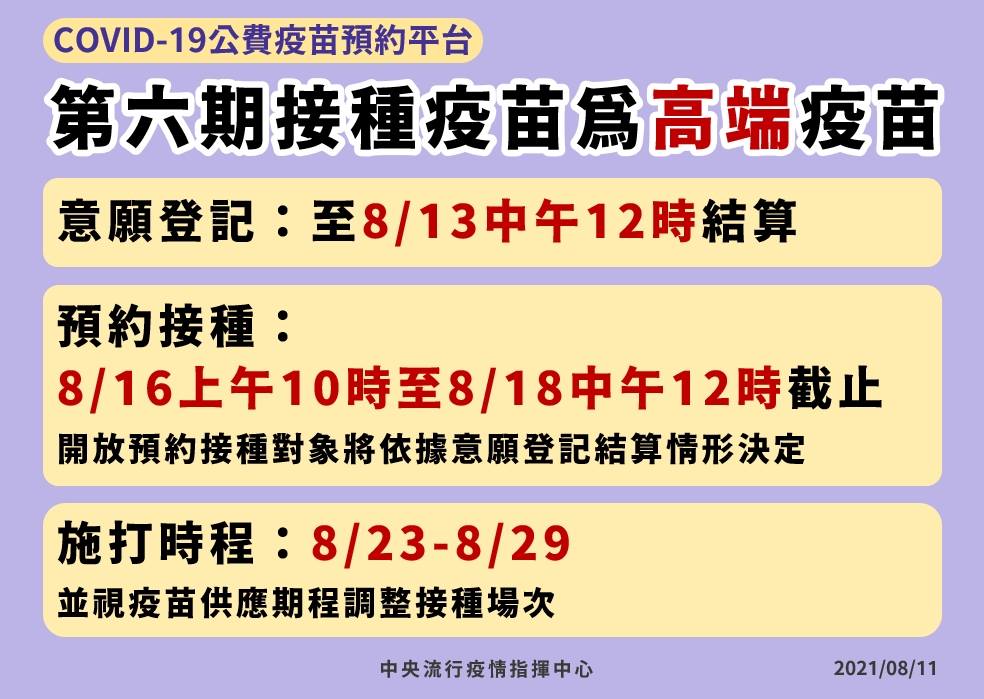 Information on the sixth round of vaccination, which will consist of Medigen vaccines. Photo credit: Ministry of Health and Welfare/Facebook

This will start on August 14th. In the meantime, swimming pools at schools will be reopened after August 12th, but only small classes of under ten are allowed. Vaccinations will no longer take place at schools, but at hospitals in order to allow schools to reopen for the fall. The Taipei Expo Center can be used for large-scale vaccinations when needed.

Taipei will consider having a celebration with 28 consecutive days of zero cases. At the same time, Ko stated that he believes it would be difficult to get back to zero cases, and that measures should be relaxed once Taiwan achieves sufficient vaccination. Subsequently, he believes that COVID-19 will become something like the flu. That being said, Ko stated that he only allowed restaurants to open for the sake of their economy, and that he believes that the development of a post-COVID economy is necessary, as a result of which he stated that economic subsidies were of key importance at present.