THREE DOMESTIC CASES and five imported cases were announced at the Central Epidemic Command Center’s (CECC) daily press conference today. All three cases were already in New Taipei and one case was already in quarantine. Of the two cases that were not in quarantine, the source of infection for one case is known. As a result, only one case had an unknown source of infection. 89.9% of cases to date have been released from quarantine. One death was also announced.

Three cases is the lowest number of cases since the start of the outbreak. Ministry of Health and Welfare Chen Shih-chung stated that this showed the situation was under control. Testing on Saturday and Sunday saw 3/5th of usual numbers, which is normal for weekends. The rate of infection at testing sites was 0.01%, which is very low. This suggests fewer cases in the community at present. 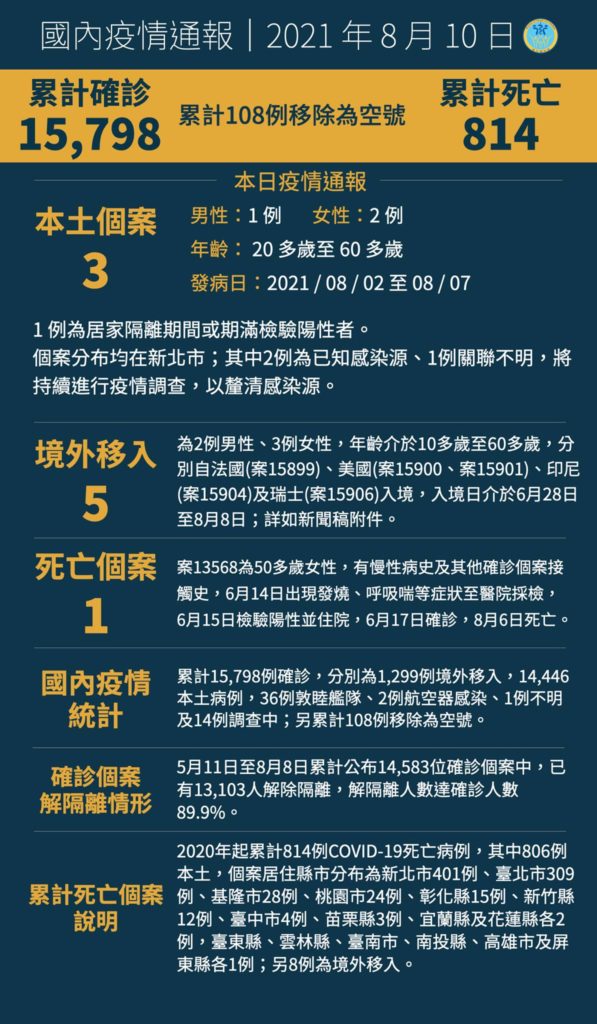 The CECC may adjust its measures depending on whether there is new information from research about mixed vaccinations or if it needs to increase the amount of time between first and second dose vaccination.

When asked if people living together can take off masks while in cars together or in restaurants, the CECC stated that future evaluations will be made based on the circumstances, as well as difficulty implementing such measures. Moreover, when asked about a Taiwanese athlete who could not get their yellow card issued at the time of vaccination accepted as proof of vaccination for a competition, the CECC stated that the Ministry of Foreign Affairs would address this issue. Asked about an individual who was listed as vaccinated despite not having been vaccinated, this may be an accident, and they are recommended to check with the clinic listed as their vaccination site.

Internet cafes are not open. Similarly, the CECC believes that libraries are sufficient and does not plan to open up study centers, concerned about the possibility of gatherings.

Two of the imported cases from today were fully vaccinated with BioNtech more than fourteen days before travel to Taiwan. As such, these can be considered breakthrough cases.

There were 74 adverse reactions to vaccination yesterday, including five deaths after AstraZeneca vaccination. There were 38 other reactions.

The government’s contract with Medigen is for the delivery of five million vaccines before the end of the year. This may be delayed if necessary for quality control inspection or other measures.

The CECC does not plan to escalate quarantine measures for inbound travelers at present, with the view that medical capacity needs to be conserved for any explosion of domestic cases.

These are the main groups of over 10,000 individuals vaccinated as part of plans drawn up by the central government. 2,614 workers that are part of Medigen and United BioMedical were vaccinated in order to avoid disruptions to manufacture of domestic vaccines. These were workers at four manufacturing facilities and three storage facilities, a total of 2,614 workers.

The Executive Yuan has announced details of the new stimulus voucher program. This mostly follows the same format as last year’s triple stimulus vouchers and will be a paper voucher, though the voucher exchanges 1,000 NT for 5,000 NT. 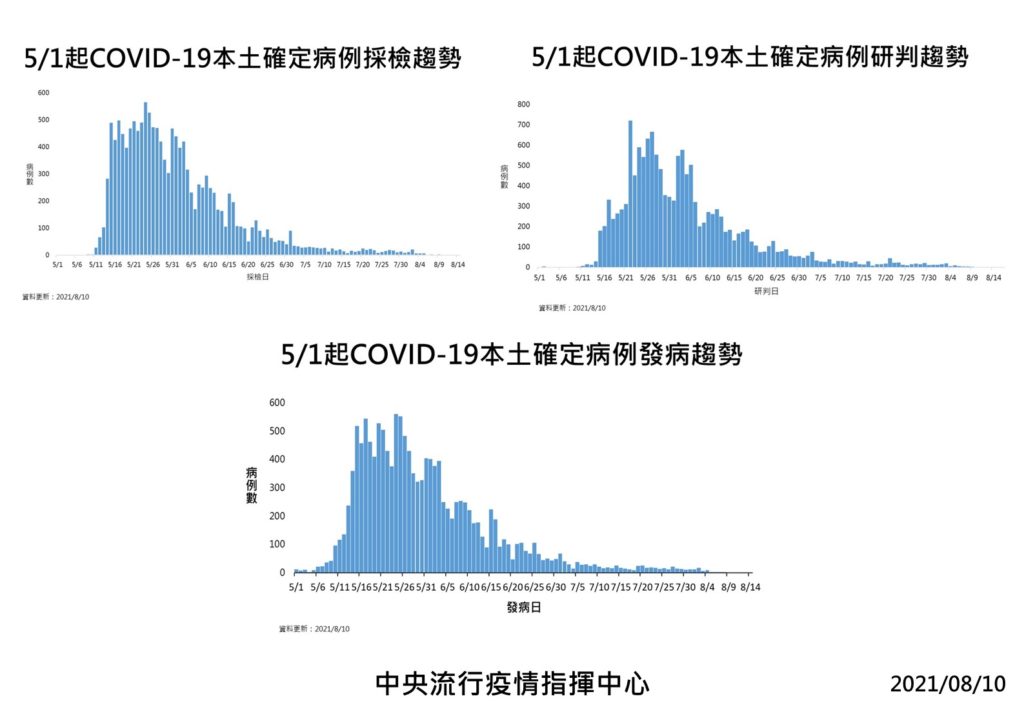 Further information released by the CECC. Photo credit: Ministry of Health and Welfare/Facebook

According to New Taipei mayor Hou You-yi, of the three cases in New Taipei, one case each was found in Shulin, Xinzhuang, and Yonghe. 317 tests over the weekend found one case.