FOUR DOMESTIC CASES and four imported cases were announced at the Central Epidemic Command Center’s (CECC) daily press conference. One of these cases was already in quarantine, while three cases had unknown sources of infection. Four deaths were announced, who primarily had underlying conditions. One death was in her 40s.

There have been some errors in which 1,500 or so individuals with one dose of Moderna vaccinations were accidentally classified as part of other vaccination categories. Though this mistake was later found, individuals who have made vaccination appointments already will still be allowed to carry out their vaccinations. 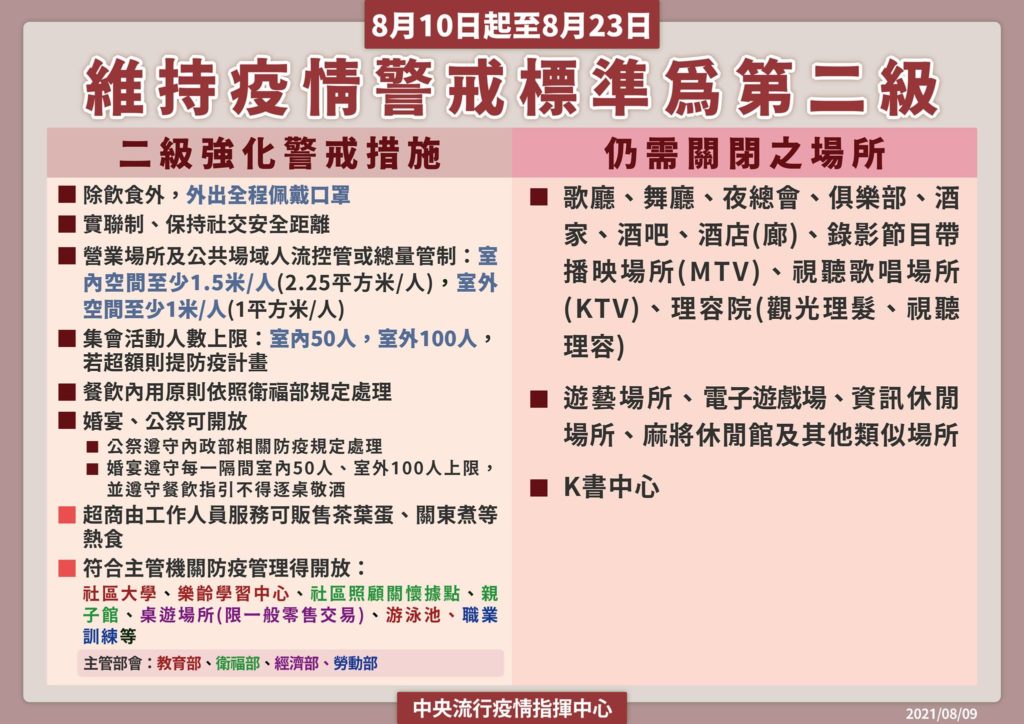 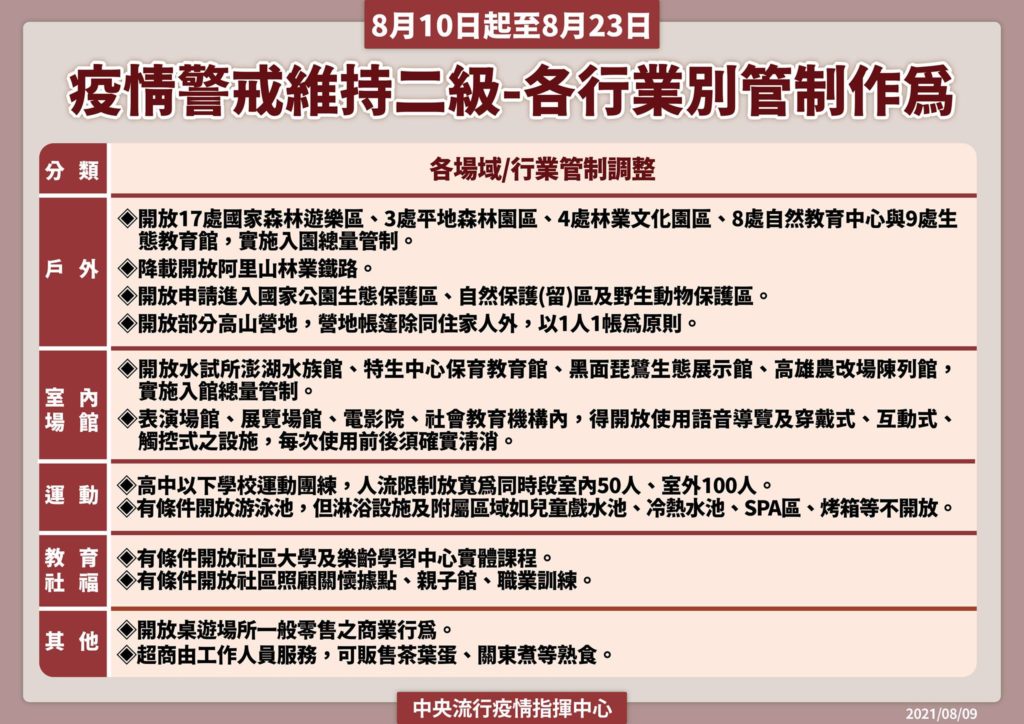 Information on current restrictions on businesses during level two. Photo credit: Ministry of Health and Welfare/Facebook

487,778 have made appointments for the next round of vaccinations, though this is still less than was hoped for. Vaccinations will start on August 11th. Though there were fewer vaccinations than usual over the weekend, due to the effects of the typhoon, vaccination coverage is now at 36.95%. Per 100 people, this is 39.09%.

The current level two alert will continue from August 10th until August 23rd. Bars, arcades, and mahjong parlors will remain closed. Tabletop game stores are open, but only for the purchase of games, not for playing inside. Tea eggs can be sold if packaged, rather than customers scooping up tea eggs themselves. Some adjustments will be made to relax restrictions on outdoor parks, ecological areas, and scenic areas.

There are increasing concerns regarding Taiwan’s supply of vaccines for second dose vaccinations. Minister of Health and Welfare Chen Shih-chung reiterated today that the CECC is prioritizing carrying out widespread first dose vaccination and that it is hoping more vaccines arrive soon. The CECC cannot rule out that there will be decreased efficacy if individuals have to wait for their second dose vaccinations. Manufacturers are aware of Taiwan’s second-dose needs and the CECC is continuing to dialogue with them.

High-risk countries are designated by the CECC based on local circumstances and testing of cases arriving from such countries.

It is expected that the Palau travel bubble may open up again soon. Similar measures to before will likely be required, with travelers not required to quarantine, but to undergo strengthened self-health management for five days, and self-health management for nine days. The greatest risk in traveling is likely at the airport, since Palau has reported no domestic cases of COVID-19 to date. As such, efforts will be made to separate travelers to Palau from other international travelers.

According to Chen, the CECC does not plan on extending quarantine periods for inbound travelers in consideration of the effects of the Delta variant currently, but it intends to maintain vigilance for inbound travelers. Negative PCR tests are required for individuals with COVID-19 to be released from hospitalization.

The CECC does not approve of individuals paying others to line up for remaining vaccine doses for them, something that Chen stated would further affect those in need of vaccines.

When asked about research from the US suggesting that the flu vaccine may have some effectiveness in preventing the spread of COVID-19, the CECC stated that flu vaccination will begin to be carried out as usual in the fall. This will target high-risk groups similarly vulnerable to COVID-19. 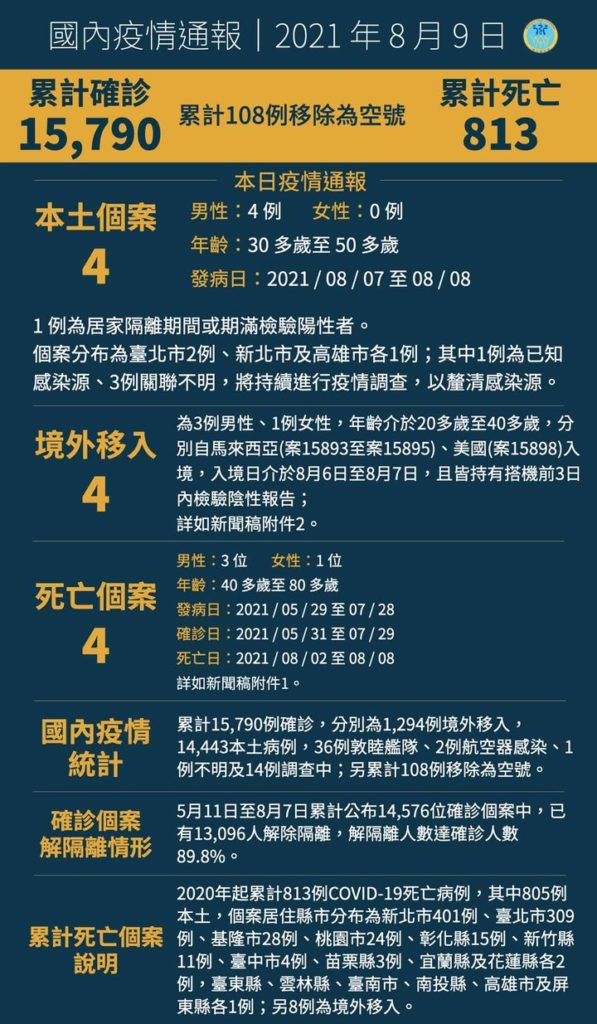 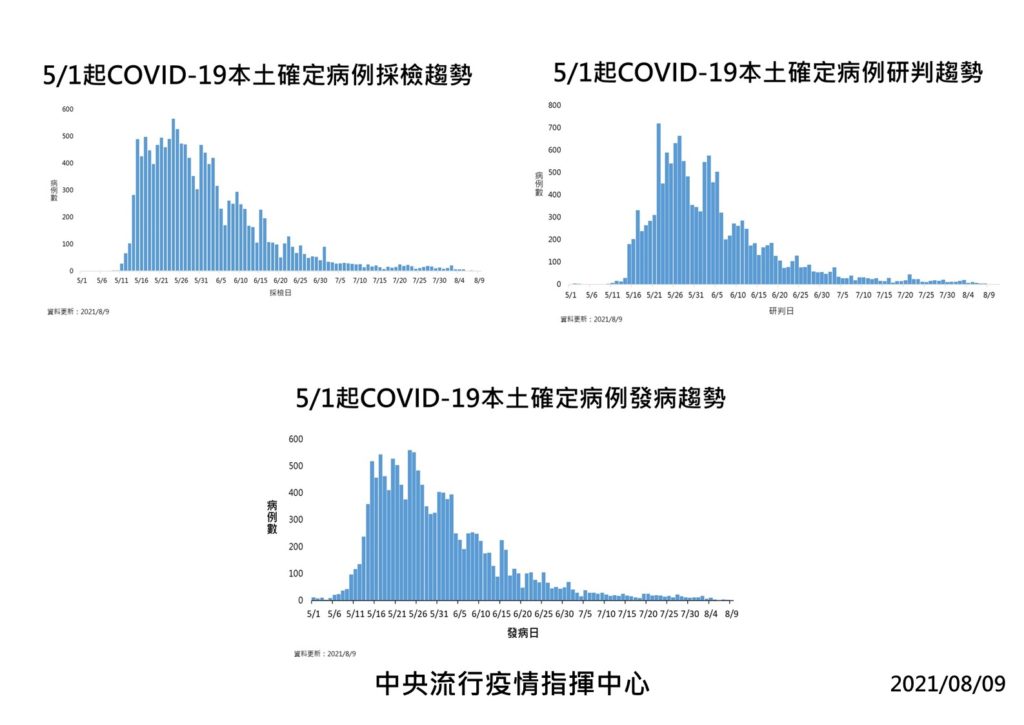 Information on the new cases from today (left) and further information released by the CECC (right). Photo credit: Ministry of Health and Welfare/Facebook

Fujian, China has reported an asymptomatic case from Taiwan.

According to New Taipei mayor Hou You-yi, the one case reported in New Taipei today was in Yonghe. The source of infection is under investigation. Swimming pools and soccer fields will be reopened tomorrow and sports activities at schools will also be allowed. That being said, players must wear masks, this is limited to twenty indoors and forty outdoors, capacity is reduced to 1/3rd, and teachers must be vaccinated or undergo regular testing. If there are any confirmed cases, the school will be closed for disinfection. Some summer activities for schools will be carried out online, with schools preparing to reopen in September.

1,129 tests at neighborhood testing stations yesterday found one positive case. New Taipei stressed that it has no plans to dismantle testing stations, but 39 testing stations will be reduced to 33 stations. New Taipei will dialogue with the Ministry of Economic Affairs, the CECC, and crane claw machine store operators regarding how they can reopen, since it has proven difficult for crane claw machine store operators to hire staff to monitor the store and carry out regular disinfections.

Taipei mayor Ko Wen-je stated that one of the two cases in Taipei today was linked to an unknown source of infection while the other was linked to HIV. 766 tests took place in Taipei on Sunday, which is lower than usual. 333 are quarantined in Taipei as contacts of COVID-19 cases currently. Ko claimed that the effectiveness of measures against COVID-19 in Taipei was shown by the fact that cases plateau then decline for the city. At the same time, Ko emphasized that Taiwan had not yet faced the Delta variant, and that the death rate from COVID-19 was still high.

1,353 restaurants have been inspected after reopening, with 105 restaurants found to not meet standards. Restaurants that violate restrictions are fined between 3,000 NT and 15,000 NT. Shower rooms are not reopened for swimming pools, which may lead to some issues regarding reopening pools. 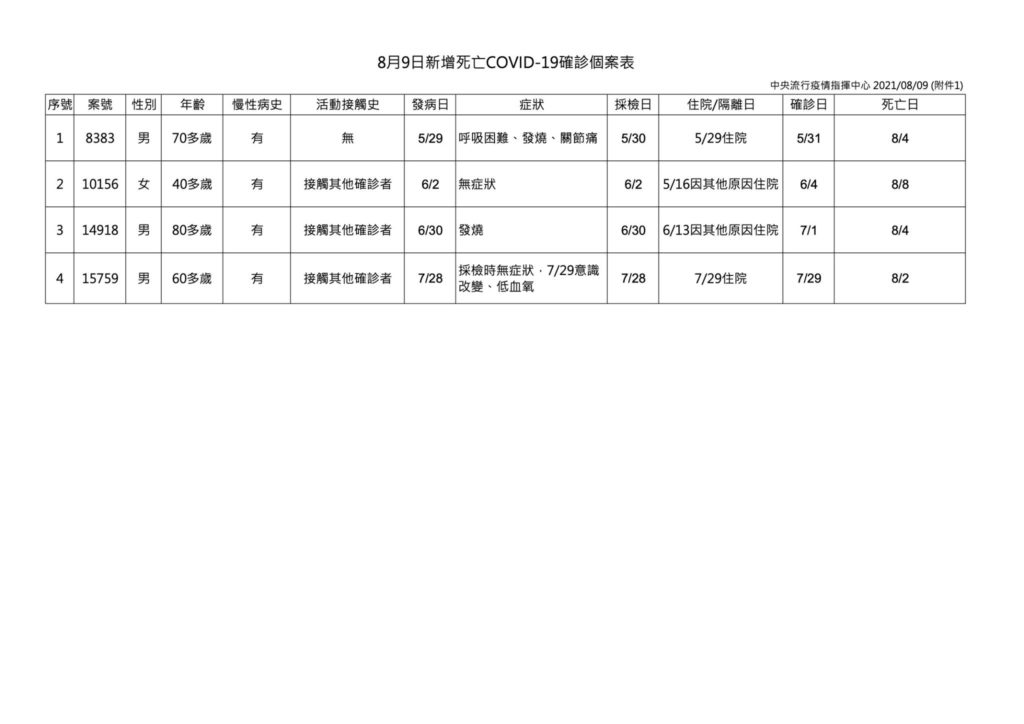 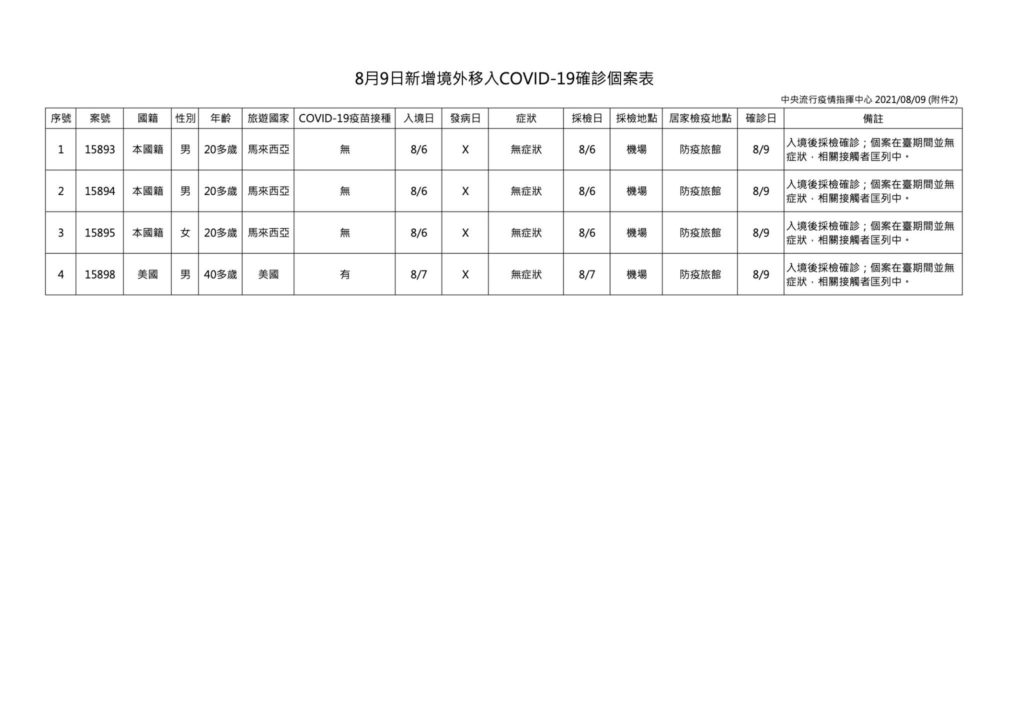 Ko asserted that it is not clear whether the central government will issue electronic vouchers or paper vouchers, but that Taipei will wait and see before issuing its own measures. Ko claimed that the QR code contact tracing system could be used to issue funds with precision. Plans to hold activities in Wanhua will take place between October and December, with the aim of financially reviving the area, which was significantly affected by the outbreak.

Taipei has shifted many meetings online since the start of the pandemic.

A COVID-19 case visited the Guilin Street Carrefour, but the store was reopened after disinfection because travel history was more than three days ago. The store was not ordered to close under new measures.