SIX DOMESTIC CASES and four imported cases were announced by the Central Epidemic Command Center (CECC) at its daily press conference today. Four of these cases were already in quarantine. Two cases had unclear sources of infection and are under investigation. There were four cases in New Taipei, one case in Taipei, and one case in Taoyuan. 89.7% of cases to date have been released from quarantine.

Twelve deaths were announced. This was not a one-day uptick in deaths, however, but includes deaths from July 23rd to the present, revising past days with zero deaths. The deaths were included in the total after integrating information. It is also the case that there is some delay in reporting deaths. 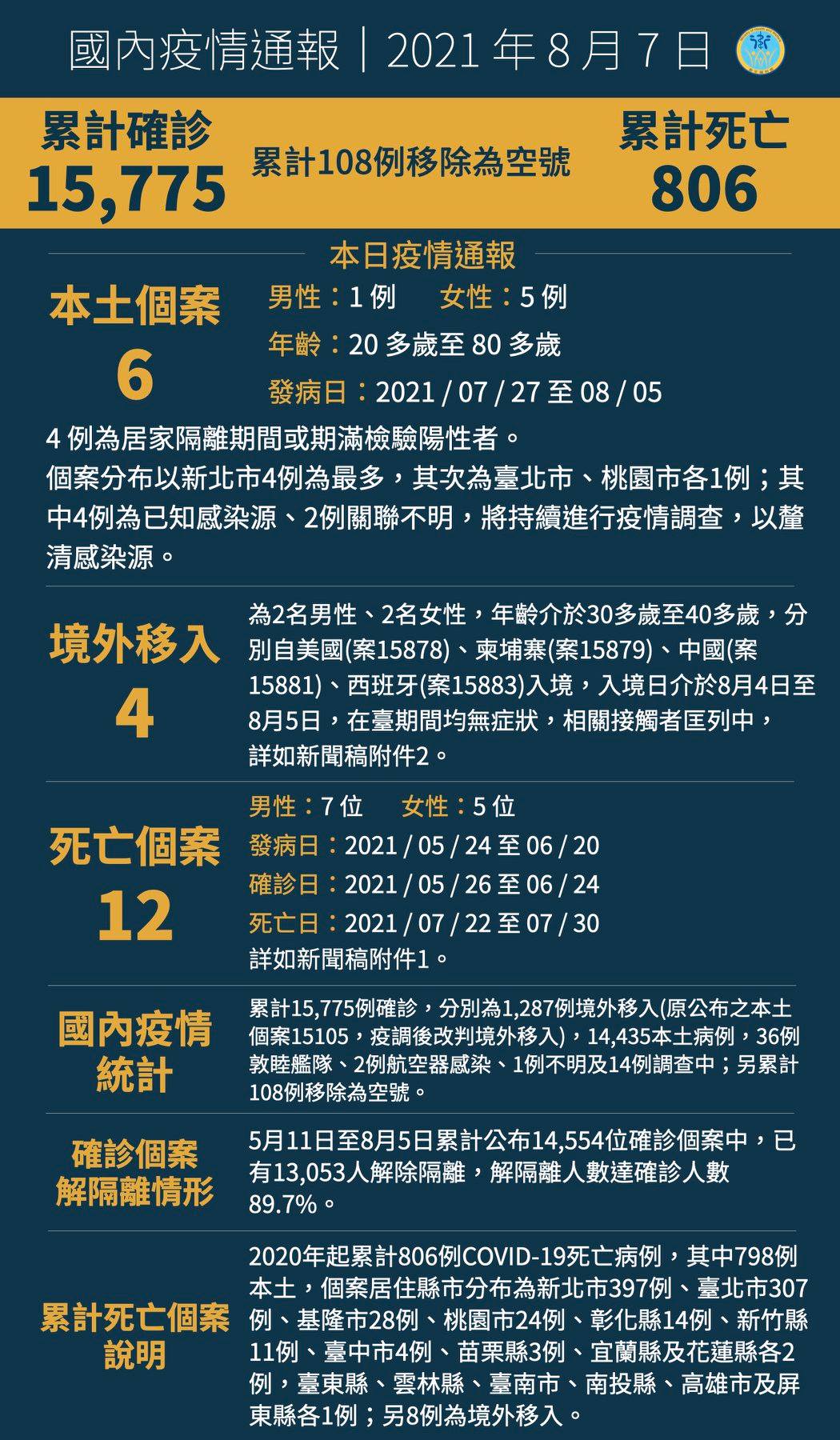 440,000 of 510,000 appointments for vaccination were made during this period. Because the number of appointments made is lower than expected, this has led eligibility for vaccination in this period to be expanded. While individuals in category nine above 55 years old were eligible to be vaccinated, now individuals who are 53 and 54 are also eligible. New appointment notifications will be sent out, allowing for appointments to be made between today at 4 PM and 12 PM on August 9th. Vaccination will take place between August 11th and August 17th.

In order to aid individuals with mobility issues, the CECC will be working with local governments to carry out home vaccinations for the elderly, who may be unable to get out of bed. This will begin with individuals over 90 years old. Medical staff will take note of underlying conditions and the safety of being vaccinated, as well as monitor individuals for fifteen minutes after vaccination.

Mixed vaccinations are to start next week for frontline medical personnel in categories one to three working in facilities used to treat COVID-19 such as specialized wards or negative pressure isolation wards, with the view that they may be especially vulnerable to COVID-19. This regimen will consist of a first dose of AstraZeneca followed by a dose of Moderna. There are 33,000 eligible to be vaccinated in this category. Distribution to carry this out will begin next week.

Because of hospital clusters, there are currently no plans to loosen restrictions on caretakers at hospitals after August 10th. PCR testing will also still be required of caretakers.

Some follow-up examination is being carried out for individuals that participated in the phase II trial of Medigen, although Medigen vaccination will begin to be carried out later this month. People vaccinated twice as part of Medigen trials will be considered fully vaccinated. 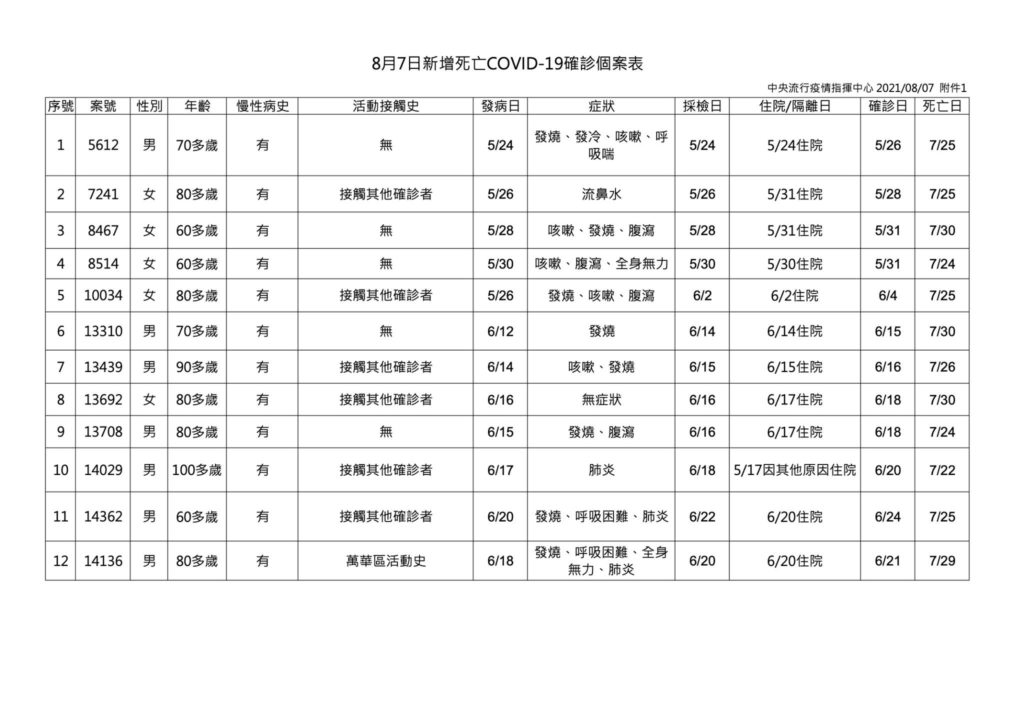 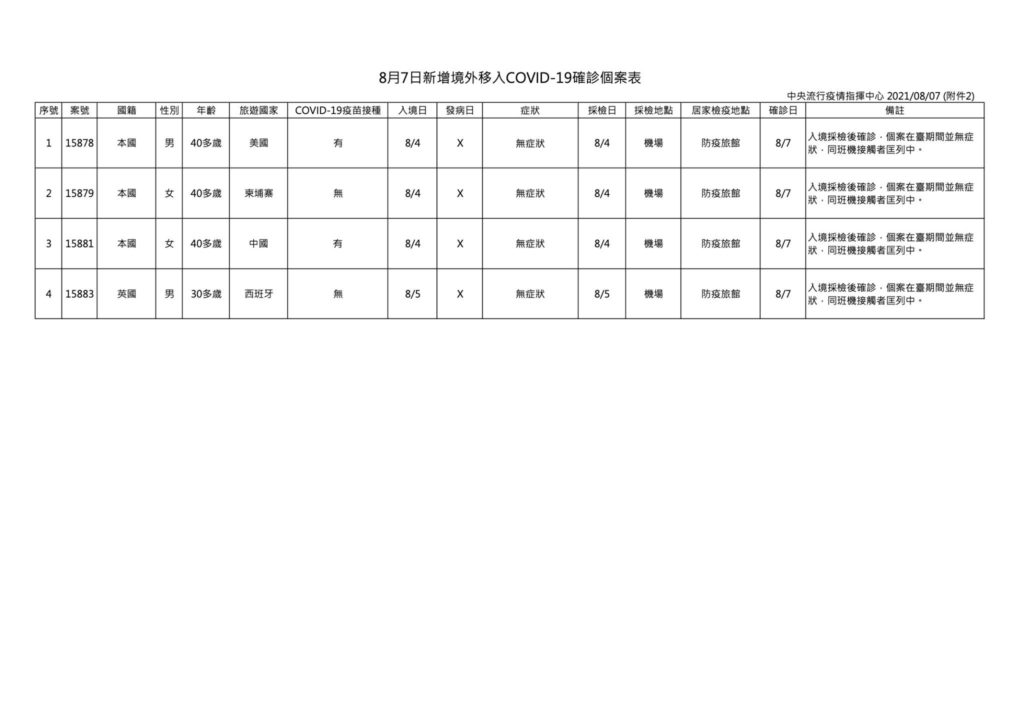 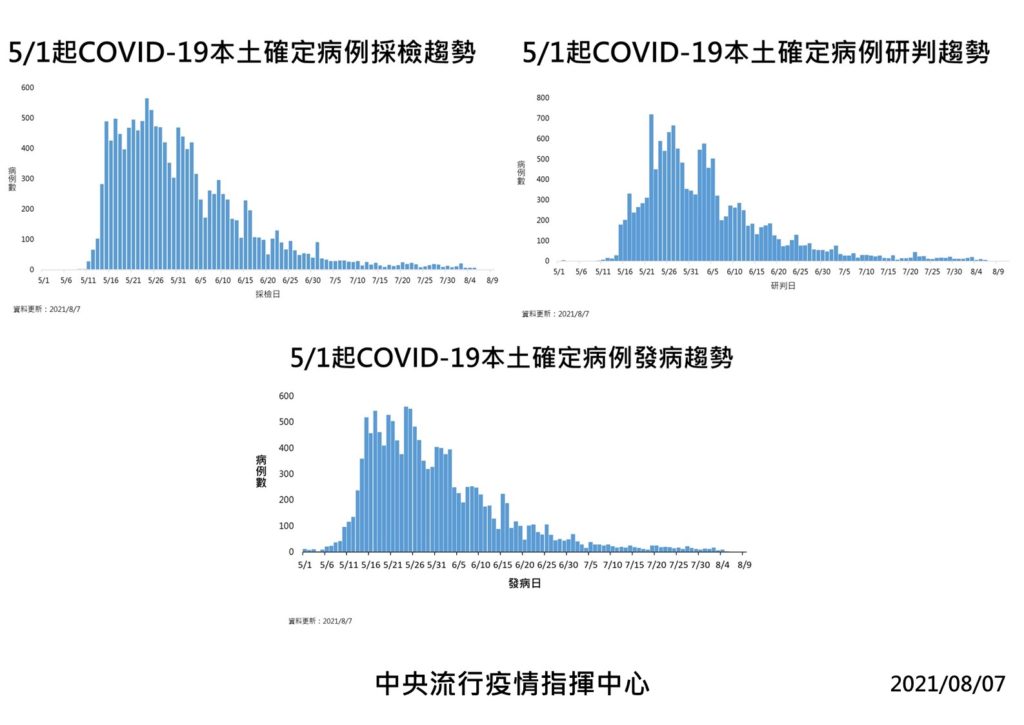 Information on the deaths announced today (left), information on the imported cases from today (center), and further data released by the CECC (right). Photo credit: Ministry of Health and Welfare/Facebook

The government continues to dialogue with vaccine manufacturers in the hopes that vaccines will quickly arrive in Taiwan.

Jaw Shaw-kong of the KMT has urged the public not to be vaccinated with Medigen vaccines and to instead wait for BioNTech vaccines.

When asked about controversy over former New Taipei mayor Eric Chu of the KMT eating in the Hsinchu city councilor without barriers and violating the restrictions on 50 indoors, Minister of Health and Welfare Chen Shih-chung stated that this violated CECC standards. However, Chen stated that local authorities have the authority to look into the incident.

If the current typhoon leads to cancellations, this may lead to delays conducting vaccination. Chen asserted that the CECC has experience dealing with such cancellations after the typhoon last time and so this is not likely to cause significant issues. If there are emergencies caused by the typhoon at quarantine facilities, necessary arrangements will be made. Chen otherwise urged the public to primarily stay at home due to the rain and noted that Father’s Day was coming up this Sunday.

According to New Taipei mayor Hou You-yi, three of the four cases in New Taipei today were under home quarantine. Two cases were due to family gatherings, while two were due to workplace infections. Twenty-one of twenty-two contacts have been put under home quarantine. 2,502 tests at neighborhood testing sites found one case yesterday, with Hou stating that test sites would not be dismantled. Hou stressed fines of between 3,000 NT and 15,000 NT for individuals that violate indoor dining regulations and called on the central government to do more to secure vaccines for Taiwan, including reassuring the public that Medigen vaccines are safe.

According to Taipei mayor Ko Wen-je, the one case found today in Taipei was from a household infection, as a result of which there were no cases with unknown sources of infection. 1,238 tests yesterday found no new cases. Of cases in Taipei from August 1st to August 7th, seven cases were imported and twenty cases were internal to Taipei. 56,958 of 73,560 eligible to be vaccinated in the next round have made appointments to be vaccinated, but because this is lower than expected, vaccination continues to be open until August 9th. Vaccination coverage is at 46.9% in Taipei currently, with 87,000 or 3.4% only having second dose vaccination. Taipei currently has no plans to reopen a testing site for the Hulin Street night market in connection to a case found there. There are no regulations specifically targeting establishments that serve alcohol, although establishments that fail to maintain social distancing measures will be fined. 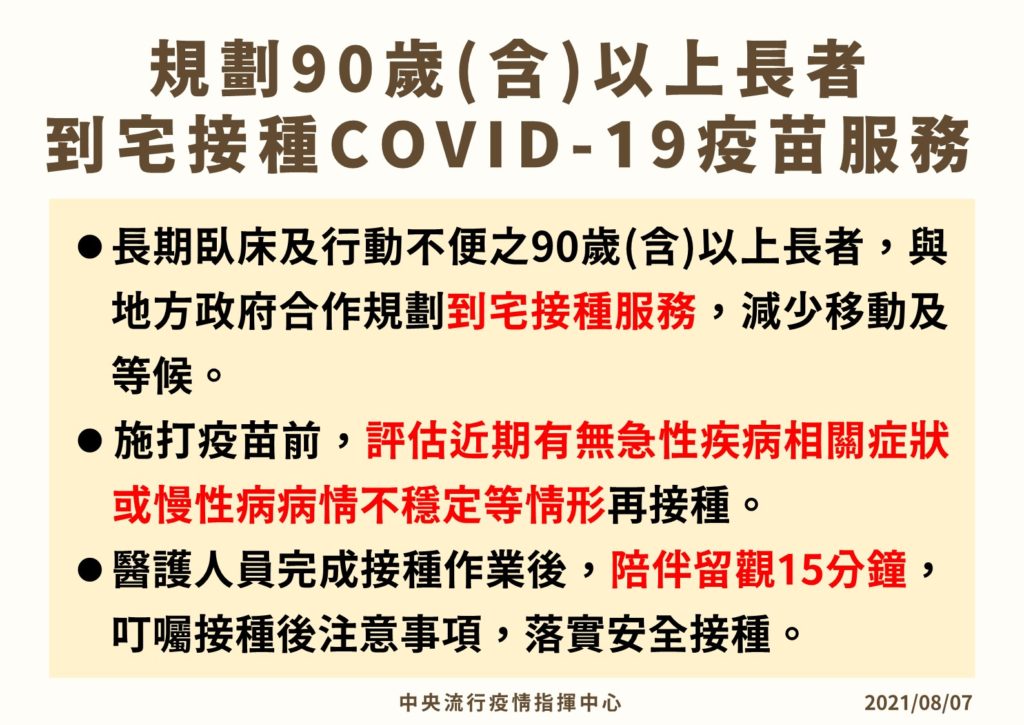 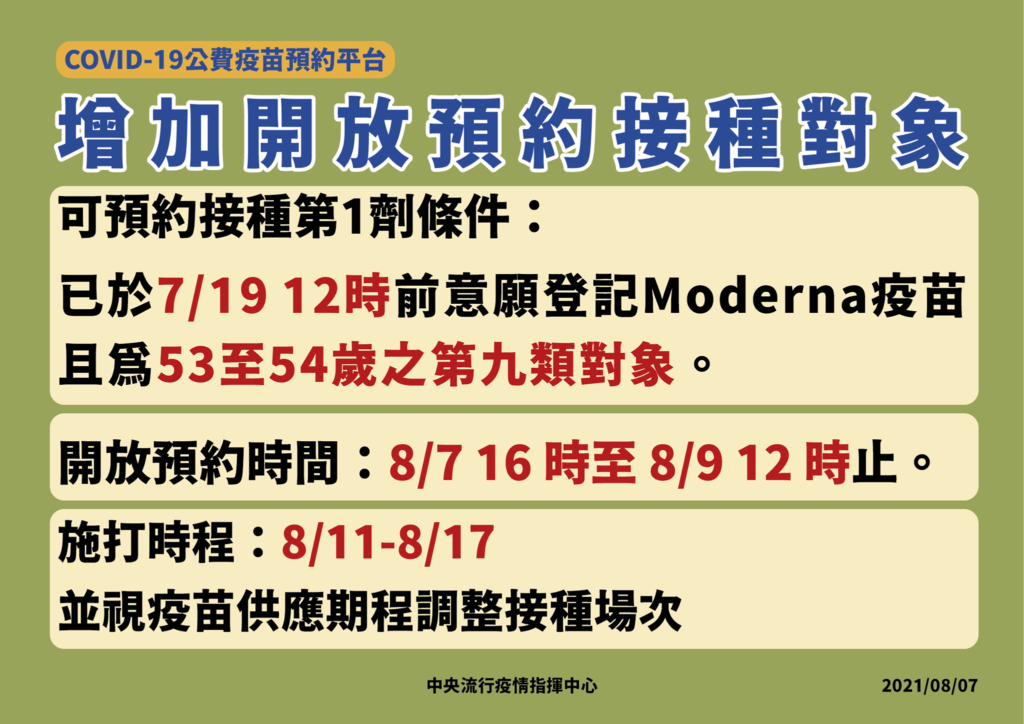 Information on home vaccinations for those above 90 (left) and on expansion of eligibility for this vaccination period (right). Photo credit: Ministry of Health and Welfare/Facebook

Ko denied reports that only five fines have been issued for the 172 a-gong-diam tea parlors in Taipei since 2019. To this extent, Ko accused the central government of “cognitive warfare” regarding reports that Taipei intended to allow tea parlors to reopen in September, stating that it would only do so when it had permission of the CECC, but that it would also evaluate whether to implement CECC measures, but accusing the central government of circulating such claims to attack Taipei.

Taipei city announced yesterday that it may spend 6 billion NT to acquire its own supply of vaccines, citing delays from vaccines purchased by the central government. While Taipei officials are to meet about the issue this week, it is unknown if this will entail attempts by Taipei to directly purchase vaccines. Taipei will come to a decision about this soon, though Ko downplayed the possibility of Taipei purchasing vaccines any faster than TSMC or Tzu Chi. Ko criticized the central government as unclear about the total numbers in each vaccination category.

In a claim that might raise eyebrows, Ko claimed that as the “most advanced countries in the world,” he believed that the US and the UK were right to relax all COVID-19 regulations after completing two dose vaccinations of its citizens. Ko seemed to suggest that this is what Taiwan should also do.