SIX DOMESTIC CASES and five imported cases were announced at the Central Epidemic Command Center’s (CECC) daily press conference today. This marks the day with the lowest single-digit cases since the start of the outbreak. No deaths were announced.

Three cases have unclear sources of infection, with one case under investigation. Four cases were in New Taipei, one case was in Taipei, and one case was in Taoyuan. 89.5% of cases to date have been released from quarantine. 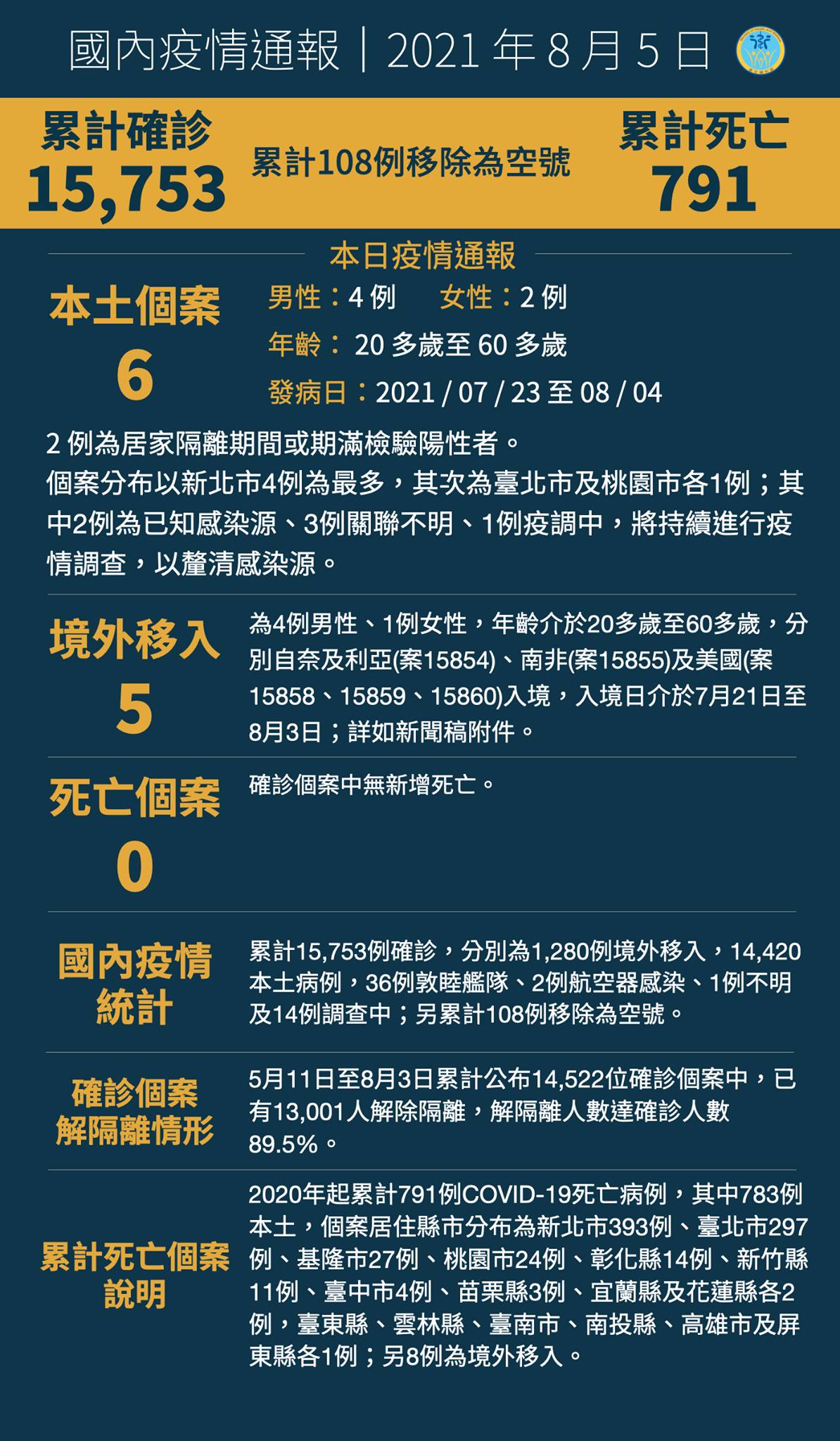 According to Minister of Health and Welfare Chen Shih-chung, around one week after the level three alert was lifted, it does not appear as though there have been any major shifts in the COVID-19 situation. Nevertheless, it is too early to see whether the situation is stable, as a result of which the CECC is not planning on lifting the level two alert. Some measures may be relaxed after August 9th. The CECC views the current situation as stable and under control, but is cautious about the Delta variant.

Measures for inbound travelers to Taiwan have not changed, with Chen pointing to the significant uptick in Delta variant cases in Israel despite the high rate of vaccination. Consequently, the CECC views COVID-19 as a long-term issue. There are no plans to lift measures for KTVs, tea parlors, and bars with hostess services yet. At the same time, local businesses can propose plans about how to reopen with COVID-19 prevention measures maintained. To that extent, measures will be made about how to reopen swimming pools.

The Ministry of Education is considering with the Executive Yuan about the possibility of holding a victory parade for returning Olympics athletes. If this were to take place, this will maintain existing COVID-19 measures.

97,342 were vaccinated yesterday, bringing vaccination coverage to 34.78%. This is 36.65% per 100 people. Around 100,000 vaccinations take place per day currently. 866,700 AstraZeneca doses remain, while there are still 658,000 doses of Moderna. These include both doses in the hands of the central and local governments.

323,000 have made appointments to be vaccinated in the upcoming vaccination round, which is around 62.8% of those eligible.

It is a strong possibility that Medigen vaccines will begin to be used later on this month. Chen took the opportunity to again assert the safety of the evaluation process for Medigen, stating that this was based on comparisons between Medigen and AstraZeneca. Likewise, Medigen is preparing trials for individuals between 12 and 20 years old, as well as for the elderly. Information about who is vaccinated as part of this trial will be input into the CECC’s centralized database, so that it is known that they have been vaccinated. 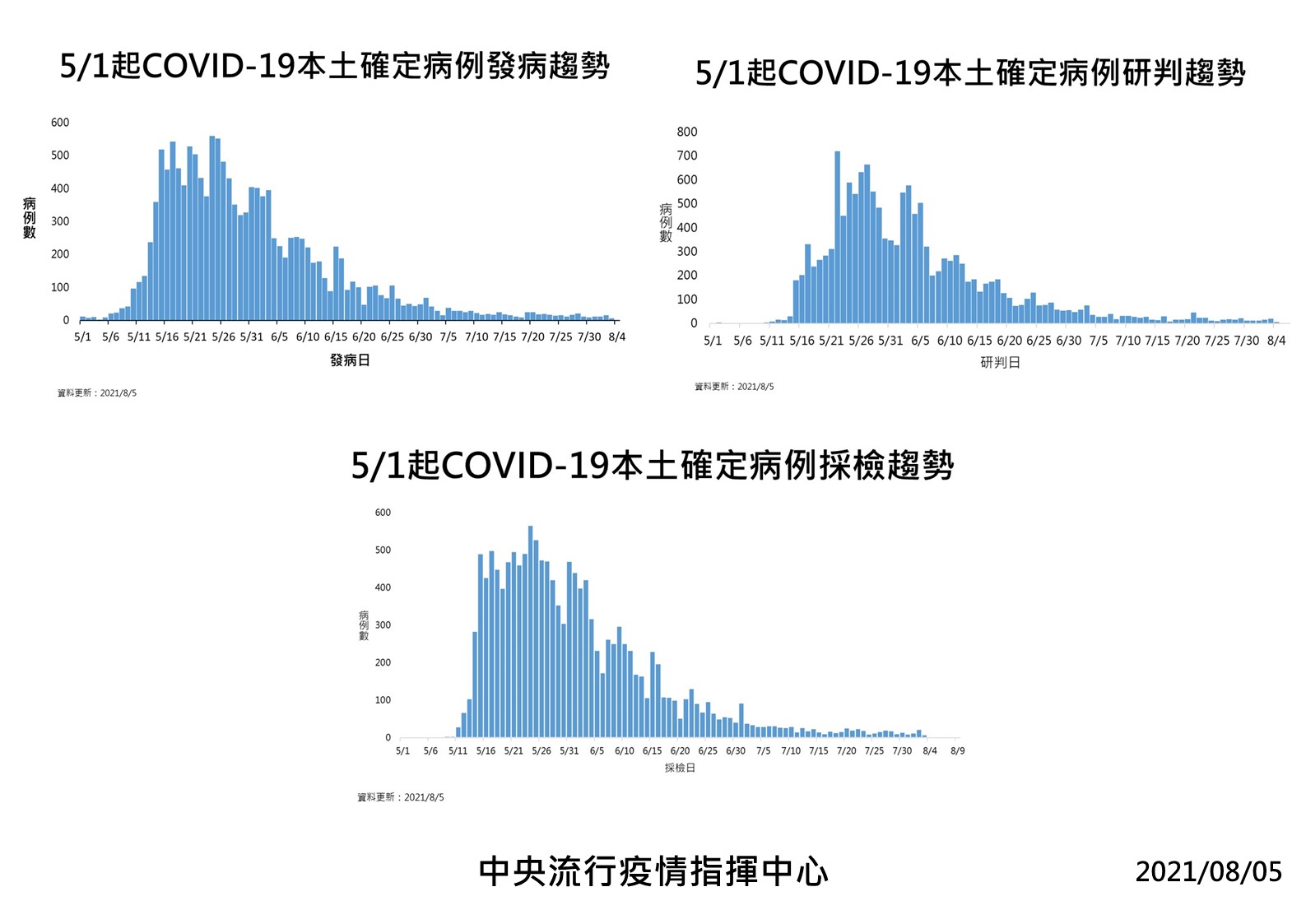 Further data from the CECC. Photo credit: Ministry of Health and Welfare/Facebook

Chen stressed that he himself is not a vaccine expert, but the CECC listens to the expert opinion of medical experts. As such, Chen defended Taiwan’s regulations on vaccine interval between the first and second doses for COVID-19 vaccines in comparison to other countries in response to comments from the media.

Chen was also asked about Terry Gou of FoxConn traveling to Europe to try and push for the speedy delivery of BioNTech vaccines that he has purchased. Chen stated that he wished Gou luck, but that this would be difficult. Terry Gou likely wishes to push for BioNTech vaccines to arrive in Taiwan before other vaccines possibly do, to politically reap the benefits of having resolved issues of lacking supply at a time in which Taiwan needs vaccines—rather than other vaccines arrive sooner and resolve the situation before he can do so.

The Ministry of Foreign Affairs has neither confirmed or denied reports that Poland intends to donate vaccines to Taiwan.

According to New Taipei mayor Hou You-yi, one of the four cases today was under home quarantine. Three cases are currently under investigation as to the source of infection. Three cases were linked to travel history in Taipei, one case to Keelung, and one case to Chiayi. 20 contacts have been listed and 17 quarantined.

852 have been tested at a department store in Zhongshan, New Taipei in connection to a case, all of which were negative. One individual was found from 2,699 tests at neighborhood testing stations. Co-workers of a bank employee and manager at an electronics factory confirmed positive have been tested. Some reports suggest this manager hid his travel history.

New Taipei is likely to reopen swimming pools next week after evaluating the situation over the weekend. Moreover, New Taipei will evaluate the number of cluster infections, case number, and number of cases with unknown infections to decide whether indoor dining needs to be suspended again. When asked about plans by Taipei to reopen KTVs, tea parlors, and bars with hostess services in September, New Taipei currently has no plans to do so.

Furthermore, New Taipei is planning on adding additional economic measures to the stimulus vouchers that the central government plans to roll out. New Taipei plans to wait until the specifics of the stimulus voucher plan are clear before announcing this. It is currently expected that this will be similar to last year’s Triple Stimulus Vouchers, except that the value is increased to 5,000 NT.