There were ten cases in New Taipei, four cases in Taipei, and two cases in Chiayi. The uptick in cases in New Taipei is due to a family cluster. The two cases in Chiayi were linked to the cluster there, consisting of the husband and child of a previously confirmed case. Twelve have tested positive in the cluster, with 98 negative tests of close contacts. 1,604 tests at neighborhood testing sites have not returned any positive results. As such, the situation in Chiayi seems to be contained though testing at four hospitals and a neighborhood testing site will continue until Saturday. 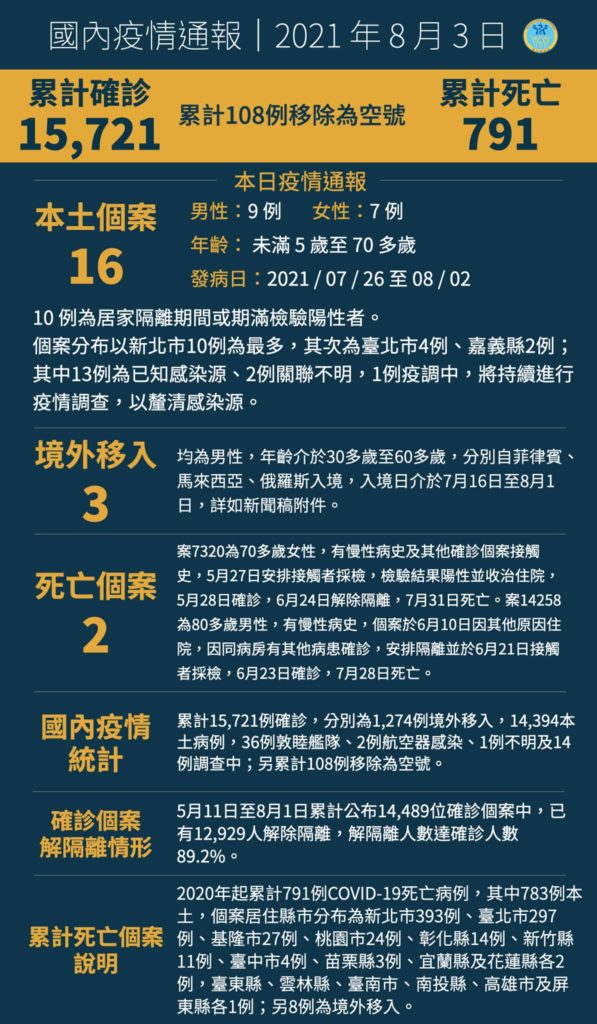 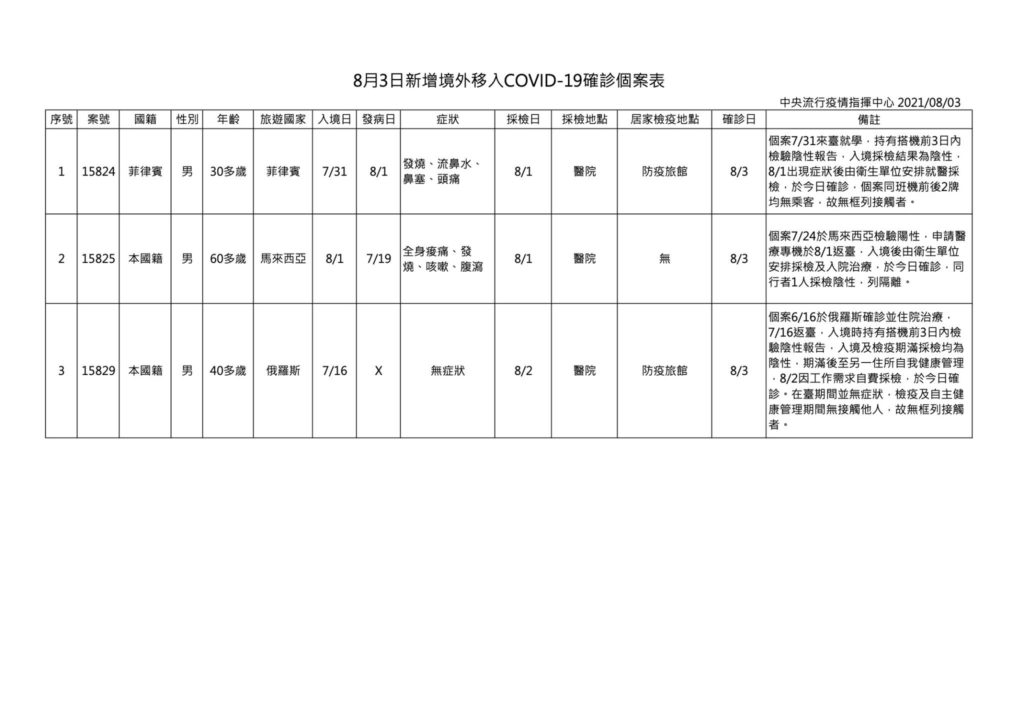 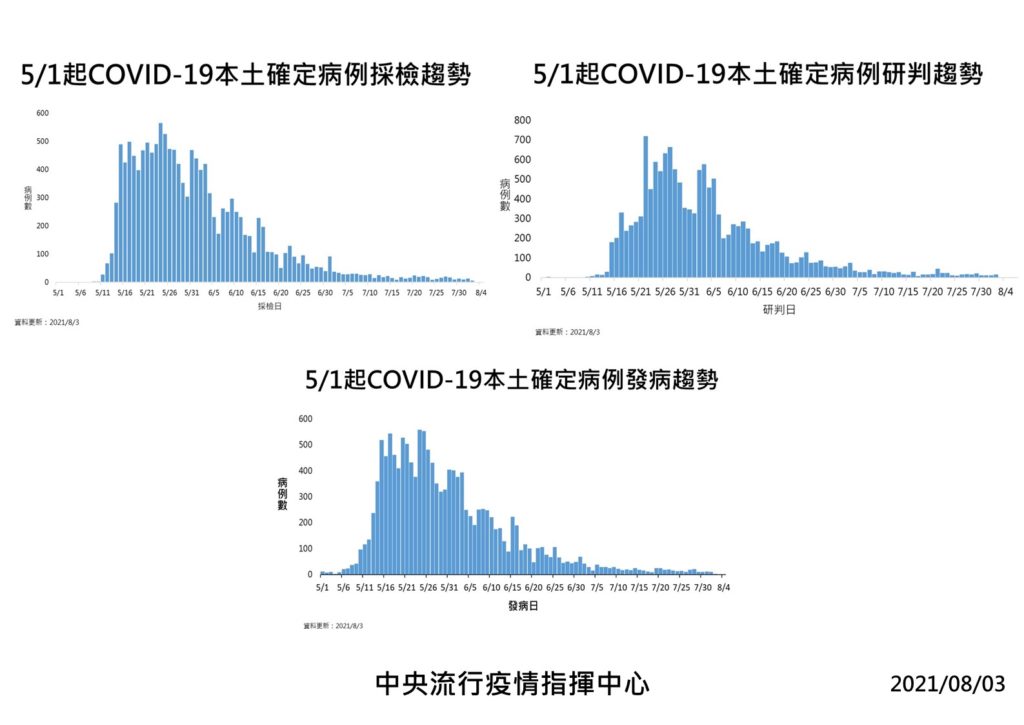 As previously announced, categories 1 to 3 and pregnant women can be registered for their second dose of Moderna if there are 28 days between vaccination intervals starting today at 12 PM. 68,063 are expected to be vaccinated in this group. Subsequently, once vaccination for this group is complete, category nine individuals between 55 and 64 years old who expressed a willingness to be vaccinated before 12 PM on July 29th can be vaccinated. This can be individuals who need to receive their first dose. Vaccination appointments can be made starting tomorrow and 10 AM and this vaccination period will go from August 11th to August 17th.

Minister of Health and Welfare Chen Shih-chung also took the opportunity to respond to allegations that the online vaccination registration platform is illegal, due to the lack of a public tender for the platform. Chen stated that the government took action based on emergency measures in the law to build the platform.

When queried about the current interval for most vaccinations of ten to twelve weeks, the CECC reiterated that different countries have different vaccination intervals based on supply, and that Taiwan is no different.

The CECC also went over information about shipments of Medigen currently undergoing quality control. There is no way to provide information on the efficacy of Medigen, due to its lack of a phase three trial, however. Side effects for Medigen vaccines are within expectation. As with other vaccinations, there is some numbness after vaccination, but this is temporary. 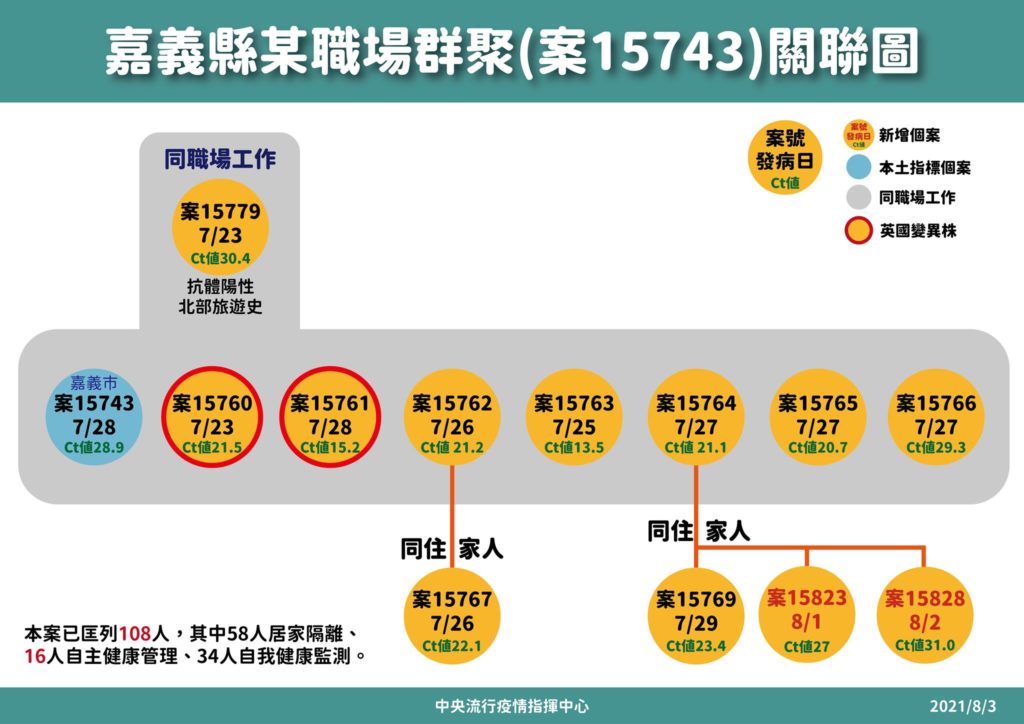 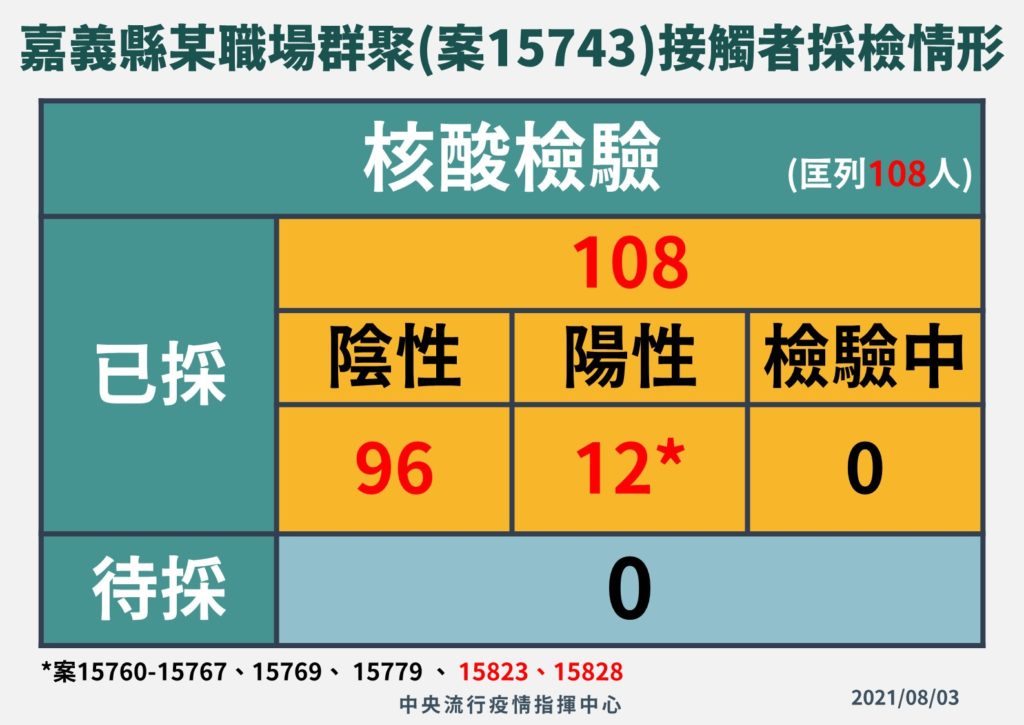 Chen Shih-chung thanked TSMC, FoxConn, and Tzu Chi for their assistance in vaccine purchases for BioNTech. The Emergency Use Authorization (EUA) for BioNTech is ready and should be signed this afternoon. Nevertheless, this only applies to the import of BioNTech vaccines, with it currently not specified as to the age range that will be allowed to use BioNTech vaccines. Much speculation has revolved around whether international standards allow BioNTech vaccines to be used on younger age groups, consisting of individuals above 12 years old.

If Taiwan applies the right to contract manufacture vaccines in the future, EUA passed for these vaccines will still apply.

Similarly, Chen was asked about vaccination for individuals above 18 years old. The CECC still plans on opening new groups for vaccination based on age. Likewise, the CECC does not rule out a possible increase in price for vaccination.

The CECC is observing the situation regarding new variants of COVID-19 resistant to existing antibodies. Nonetheless, vaccines are still effective against COVID-19 variants, even if efficacy is decreased.

The Ministry of Education plans to present a plan on reopening pools to the Executive Yuan this afternoon. If this plan is feasible, pools can be reopened.

Charity groups have been hard hit by the COVID-19 outbreak. In-person donations for the Taiwan Fund for Children and Families (TFCF) have dropped by 80%, resulting in a 45% decline in the TFCF’s total income. The Genesis Social Welfare Foundation has also announced a loss of 3 million NT income.

Peggy Chen, Taipei mayor Ko Wen-je’s wife, continues to claim in the media that she devotes great periods of time to trying to secure a vaccination appointment for her children using leftover vaccines. Her children are, notably, above eighteen years old, or they would not be able to be vaccinated.

There are no plans to hold a victory parade for Olympic athletes, due to the risks of public gatherings at present.

According to New Taipei mayor Hou You-yi, eight of the ten cases in New Taipei today were found while in home quarantine. Four are connected to a hospital cluster, while some cases were connected to gatherings of friends or family. 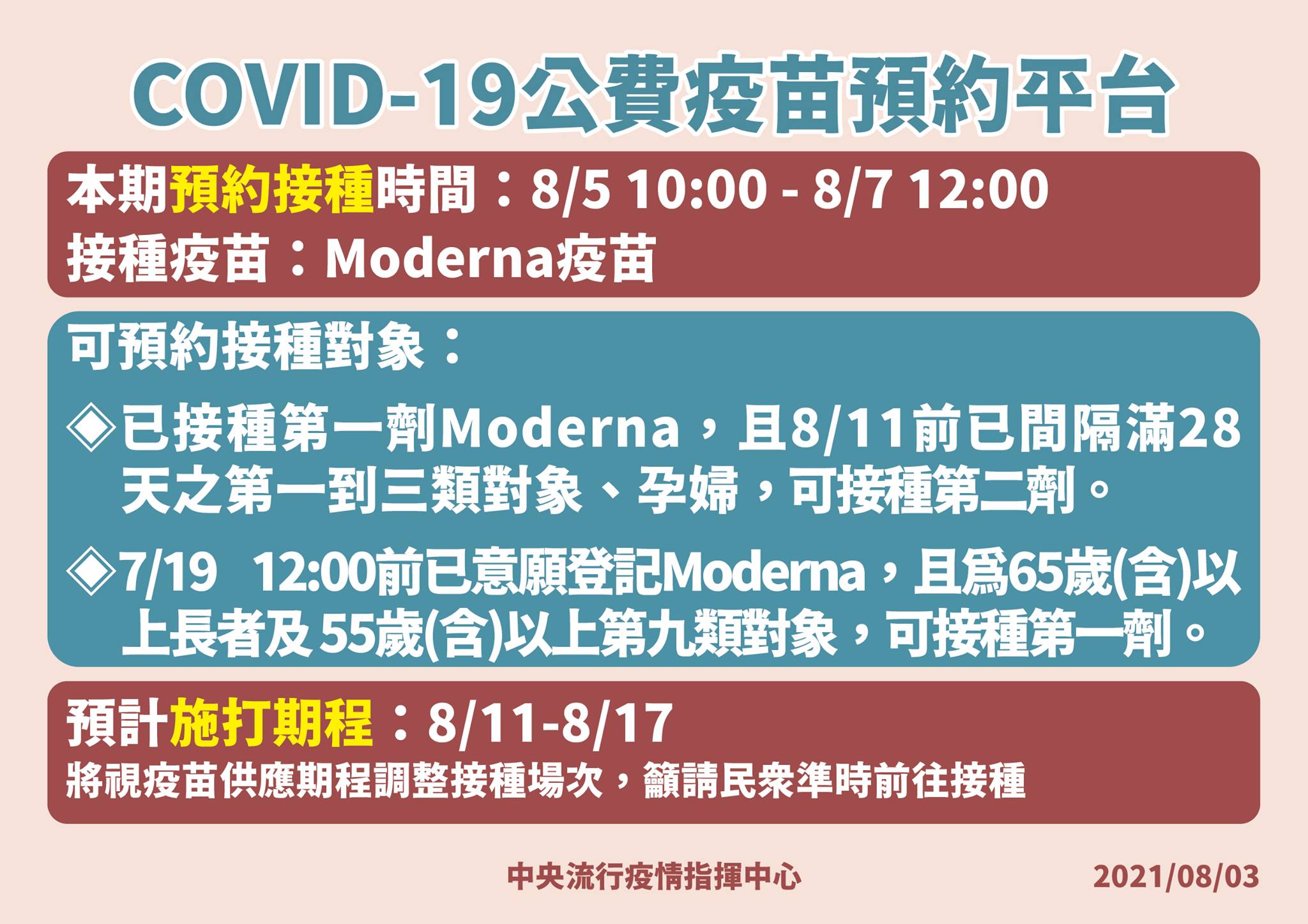 Information on registration for the next round of vaccination. Photo credit: Ministry of Health and Welfare/Facebook

The hospital cluster broke out at a hospital that specializes in treating patients with breathing issues. 212 PCR tests found eleven positives, including six cases listed in Taipei, two cases in Taoyuan, and one case in Taichung. The hospital is no longer accepting new patients. 243 contacts have been listed and 129 have been put into home quarantine. These cases are expected to be announced by the CECC tomorrow. Otherwise, 3,661 tests at neighborhood testing sites found one case.

Around half of restaurants in New Taipei are still closed and are remaining using takeout, due to caution or an inability to conform with measures against the spread of COVID-19. When asked about some restaurants using cardboard barriers, Hou stated there is some leniency for restaurants that are unable to enact COVID-19 measures immediately, as today is only the first day of indoor dining being reopened in New Taipei, but that there would be fines in the future. He believes that the largest issues with restaurants come from inadequate social distancing within restaurants.