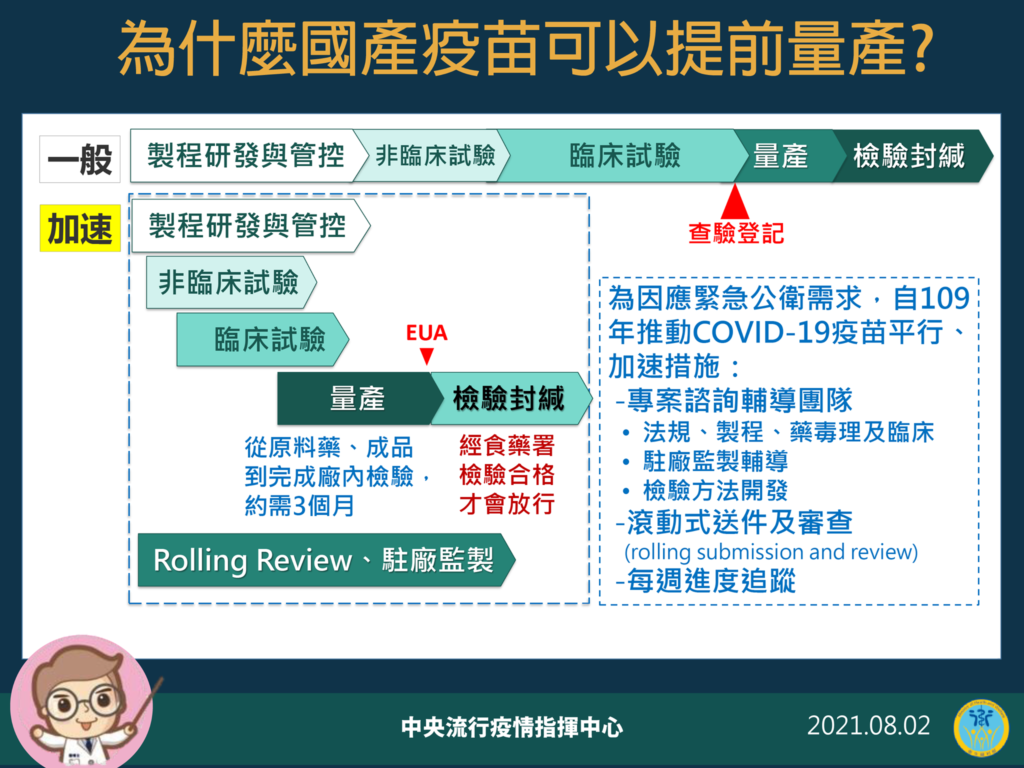 Infographic on the process for Medigen manufacture. Photo credit: Ministry of Health and Welfare/Facebook

Minister of Health and Welfare Chen Shih-chung devoted a substantial period of the press conference today to discussing the Emergency Use Authorization (EUA) process for Medigen and the vaccine’s manufacturing process. Namely, 265,000 domestically manufactured Medigen vaccines will be undergoing quality control testing for twenty-one days and are expected to be available for use before the end of August. This process began last Saturday.

According to Chen, if Medigen had waited until EUA had passed to begin preparations to manufacture vaccines, this would have resulted in a further six-month delay. There was a need to prepare ahead of time to procure machines, vials, and materials needed to produce vaccines. Chen stressed the stringency of the process but also stated there had been some confusion, with some confusing the regular EUA process with the expedited process. Chen emphasized that other countries, including the US, had sped up the process.

Medigen vaccines are expected to be sent out in batches of 500,000 to 600,000 vaccines, with Chen stating that sending out batches of 200,000 to 300,000 vaccines could lead to difficulties. Some vaccines with P numbers that are skipped may be due to quality control issues, with further information requested about the vaccines before they can be used. There should be 80,000 doses per shipment of Medigen.

United Biomedical vaccines, which are currently undergoing the EUA process, have undergone the same expedited manufacturing process. Preparations for vaccination are to be made with 250,000 willing to use Medigen, seeing as procurement will also need to include the second dose.

Indeed, At present, 966,000 are willing to accept Medigen vaccines. Likewise, meeting records for the meeting that led to the authorization of Emergency Use Authorization (EUA) for Medigen have been publicized, though some outlets have begun to point to Medigen’s reduced effectiveness against the Delta variant as mentioned in the meeting. Chen stated that he was happy to publicize information about the EUA process in the interests of transparency, but expressed frustration about questions about upcoming supply, since he could not predict how many vaccines would pass quality control measures. Chen also emphasized that all vaccines performed weaker against the Delta variant of COVID-19.

Hau Lung-bin of the KMT is currently filing a lawsuit to try and overturn EUA for Medigen. As there will be more vaccines produced than citizens willing to be vaccinated with Medigen supplies, the Control Yuan has suggested that Taiwan donate them to diplomatic allies. The KMT is likely to try and frame this as the Tsai administration offloading dangerous and untested vaccines onto Taiwan’s diplomatic allies, or criticize the Tsai administration as prioritizing diplomatic allies over vaccinating Taiwanese citizens.

Stimulus vouchers exchanging 1000 NT for 5000 NT are expected to be released at the end of September. The vouchers can be used at hotels, restaurants, and other establishments. 110 billion NT have been allocated for the plan by the Executive Yuan. The KMT has called for the use of direct cash deposits instead of vouchers, though the Tsai administration likely intends for people to spend vouchers within a set period instead of possibly not using money received from direct cash deposits.

There were reports of crowds in the Miaokou Night Market in Keelung yesterday after the relaxation of measures.

The Executive Yuan plans to decide whether to moderately loosen COVID-19 restrictions by August 10th. Chen Shih-chung emphasized that there have been less than ten cases with unclear sources of infection for over twenty days, but that the effects of loosening level two restrictions are not clear from observing last week. As such, this week will be an important observation period. It is not expected that measures will be rolled back, but this could affect the pace of releasing measures. Relevant organizations can propose plans to hold events within the parameters of COVID-19 prevention measures.

Chen Shih-chung stated that the level two alert is not likely to be lifted after August 10th, stressing how other countries have seen explosions in case once they relaxed measures. It is expected to be some time before karaokes, KTVs, tea parlors, and bars with hostess services can reopen. Crane claw machine stores can be reopened if there are staff on hand to monitor crowds and perform regular disinfection, with the Ministry of Economic Affairs potentially coordinating regarding this. 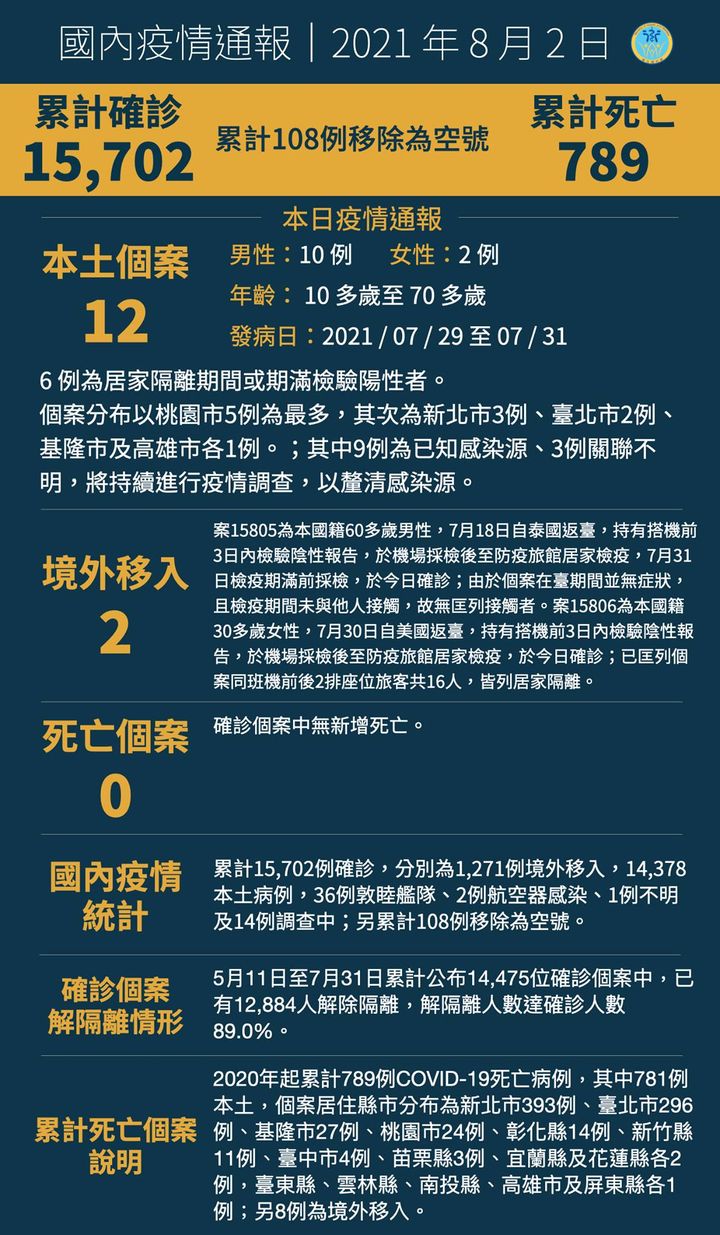 While it is currently hoped for ten to twelve weeks between vaccinations, the CECC doesn’t rule out extending this if necessary. Around 70,000 individuals in categories 1 to 3, as well as pregnant women, are expected to be vaccinated in the next round of vaccination for their second dose of Moderna, while 420,000 Moderna vaccines are expected to be used for category 9 individuals between 50 and 64. This can only cover a portion of category 9 individuals, however.

When asked if there are plans to hold a parade for victorious Olympics athletes, Chen states it’s not within his rights to decide, but he’d prefer if they came to the CECC to serve as their ambassadors. If such an event is held, it would need to maintain COVID-19 prevention measures.

Both Taipei and New Taipei announced the resumption of indoor dining today, which will not allow for more than fifty indoors and one hundred outdoors.

According to New Taipei mayor Hou You-yi, one of three cases in New Taipei today was already in home quarantine. 1,858 tests in neighborhood testing stations found no positive cases, though there was one false positive. Hou emphasized that the situation was under control in New Taipei, claiming that the rate of infection dropping to .05% last week compared to .10% the week prior and .09% two weeks ago was the metric for allowing for the relaxation of measures on indoor dinings. According to Hou, the vaccination coverage rate for New Taipei was 36.8% at present.

Hou drew comparison to upticks in cases after relaxing measures in Hong Kong and Singapore, stating that if the Delta variant entered Taiwan, or there was an increase in the number of cases, cases with unknown sources, or cluster infections this would lead to a quick suspension of indoor dining again. Restaurants, night markets, and department food courts, are allowed to reopen but social distancing must be maintained, barriers must be set up, and set meals are prioritized. People must wear masks once they get up from their seats, staff should handle distributing food at buffets, and karaoke cannot take place at restaurants. Hot pot should be maintained to one person per pot. There should be frequent testing of employees for employees who are not vaccinated.

New Taipei’s sixteen sports centers and seven fitness centers, including the water sports center in Bali, will be reopened and be in operation from 2 PM to 10 PM. Pools are not re-opened. All workers must be tested and regular disinfections must take place. Measures for Ghost Month also require 2.25 square meters between individuals outdoors and one meter for those indoors, with no more than fifty indoors and one hundred outdoors. Hou declined to comment when asked about Eric Chu announcing a run for KMT party chair.

According to Taipei mayor Ko Wen-je, one of the two cases found in Taipei today was found in quarantine. However, one of the cases had an unknown source of infection. No new cases were found from 882 tests at neighborhood testing stations. Vaccine coverage is at 43.5% at present in Taipei.

Ko Wen-je stated similarly that barriers must be set up and/or social distancing maintained at restaurants and that workers should be regularly tested if they are not vaccinated. If visitors to restaurants test positive for COVID-19, the restaurant must be closed for three days and switch to takeout for eleven days.

Taipei requires ten or fewer cases per day, two or fewer cases with unclear sources of infection, and three or fewer clusters per week for maintaining indoor dining. The next two weeks will serve as an evaluation period for this policy.

Ko emphasized coordination with New Taipei on reopening, though he stated there had been less coordination regarding escalating alert levels. Ko did not answer when asked about coordination with DPP-controlled Taoyuan and Keelung, responding that they had already reopened indoor dining. 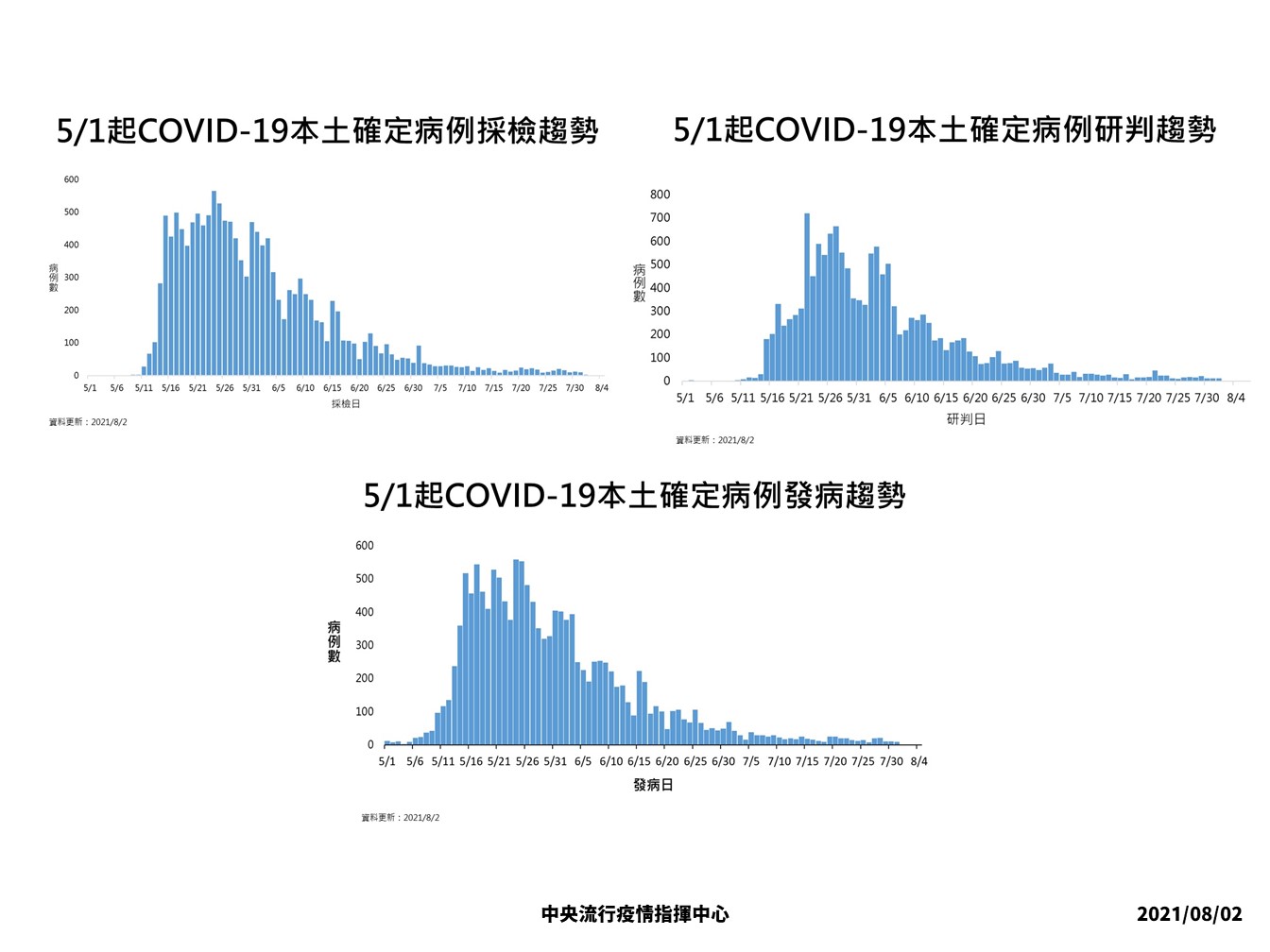 Ko stated that he was originally planning on reopening shrimp fishing establishments earlier, but the decision was later made to include them alongside restaurants because they involve eating. Only large crane claw machine stores are expected to be able to reopen, because of the need to hire staff to monitor the store and carry out disinfections.

Ko otherwise attacked the Tsai administration regarding vaccine purchases, claiming that the expedited process for Medigen was ridiculous from a medical perspective, and that the Tsai administration had neither purchased vaccines nor sought to contract manufacture them. Though the Tsai administration has stressed that it has done this before the present outbreak and that other countries have sped up their vaccine development process, Ko also called on the central government to speed up the process for vaccines arriving in Taiwan. When asked about the Olympics, Ko stated that Taipei would make efforts to boost the sports industry and that it would add additional prize money to the money distributed by the central government for athletes that won medals, stating that it was already doing this.