12 DOMESTIC CASES and two imported cases were announced at the Central Epidemic Command Center’s (CECC) daily press conference today. 6 of these cases were already in quarantine. Two deaths were announced, who were in their 60s and 70s. There were six cases in New Taipei, four cases in Taipei, and one case each in Taichung and Taoyuan. 89% of cases to date have been released from quarantine.

No new cases have been added to the Chiayi cluster so far. Outside of ten cases previously found, 88 contacts tested have been found to be negative. 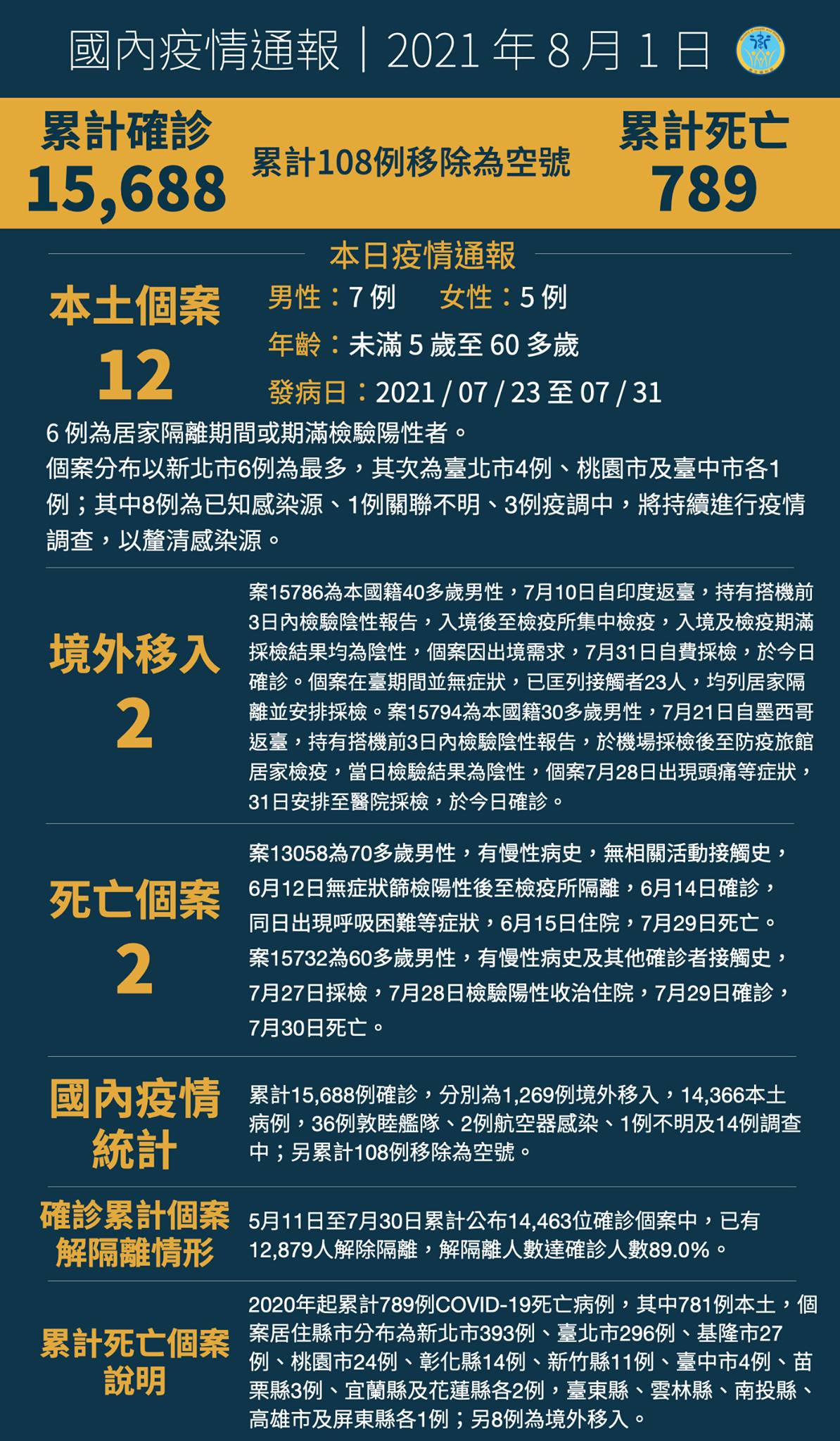 Categories 1 to 3, as well as pregnant women, who have already been vaccinated with one dose of Moderna 28 days prior to August 11th can now be vaccinated. Such individuals can be registered to be vaccinated on August 3rd on the online vaccination system after 12 PM.

With it debated whether Taiwan should use a dual-track system for second-dose vaccinations based on drawing up lists of the eligible or should shift entirely to use the online registration system, the CECC has stated that it will register individuals who have difficulty using the online system in waves in care institutions or schools. That being said, it still primarily hopes to use the national online system, with some local governments expressing concerns about elderly individuals that may not know how to use the system but also expressing a desire for the online system to be maintained. Specified clinics will be set up for individuals to receive mixed vaccinations, if they are unable to receive a second dose of the same vaccine due to adverse reactions, so as to simplify the paperwork needed.

The CECC will coordinate with local authorities if there are issues. The CECC is also aware of Taipei and other local governments raising concerns that there may be inadequate supplies for second-dose vaccination.

Regarding the manufacture of domestically manufactured vaccines, the CECC will begin distributing vaccines when there is supply. The CECC is not waiting until stocks of one million or two million vaccines accumulate before beginning to distribute them.

When asked about a section of the Shin Kong Mitsukoshi department store in Taipei being closed for one day, instead of three days, for disinfection after a case was found there, the CECC stated that businesses will be made to close three days for disinfection in the event of COVID-19 cases but that such measures may be different for public areas. The CECC stressed that it places greater priority on contact tracing than disinfection.

When asked about economic considerations for exhibition spaces affected by the outbreak, Minister of Health and Welfare Chen Shih-chung stated that future relief measures may be considered, but some measures have been rolled out already. As it is close to one week since the shift to level two alert, the CECC will consider plans to reopen such spaces going forward. 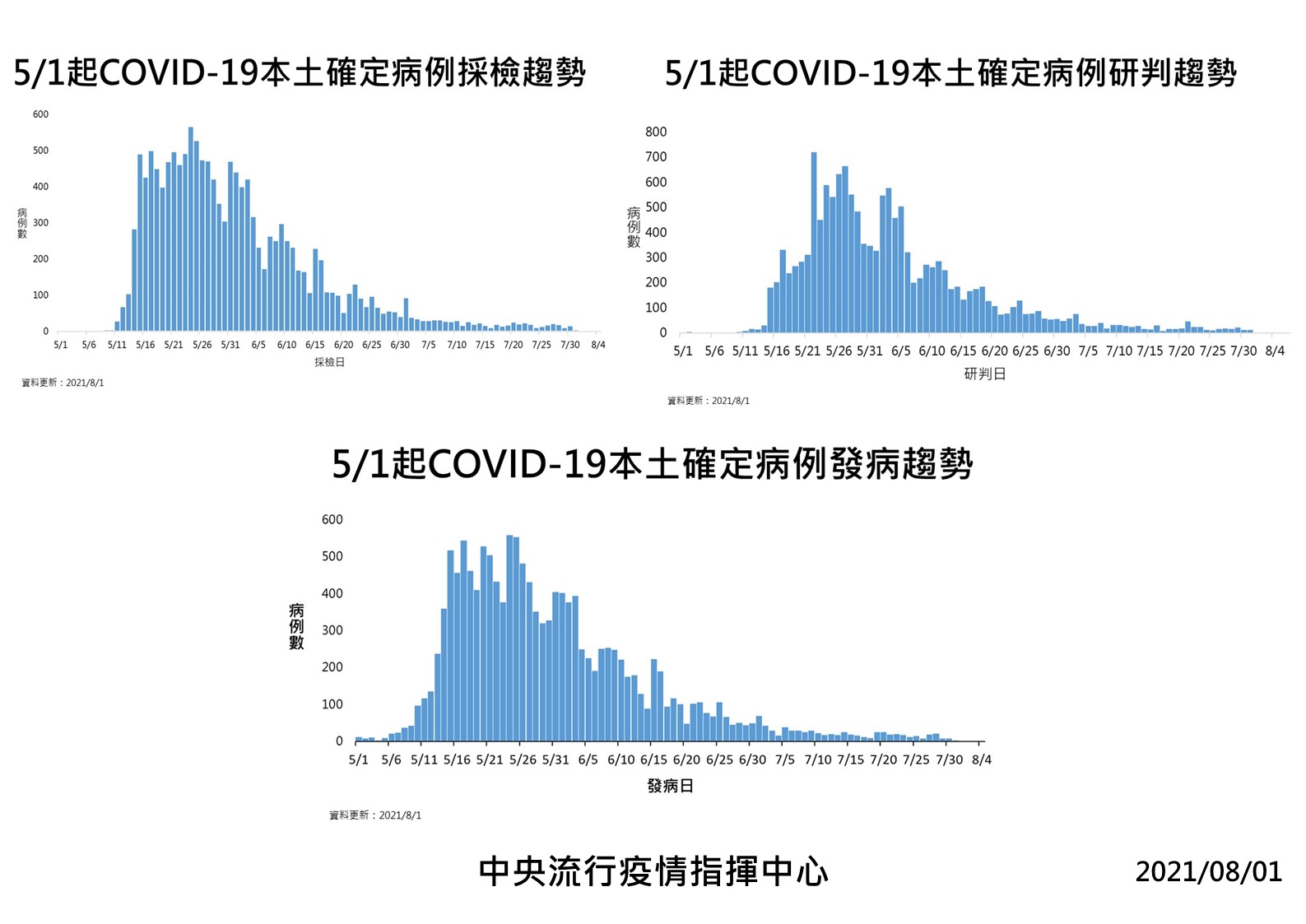 Chen and other CECC officials were also questioned about the increased transmissibility of the Delta variant of COVID-19. Chen cited countries that have experienced issues with the Delta variant with higher rates of vaccination than Taiwan, such as the US, Holland, and Israel, inclusive of how they were considering third doses to deal with new variants.

Chen stated that this drove home the importance of keeping Delta outside of Taiwan, but also emphasized that vaccines still have effectiveness against Delta, and so the rate of vaccination must be boosted. Chen stated that while there was some effectiveness 14 days after the first dose of vaccination, the second dose is required for full effect, and it is still possible to get COVID-19 after being vaccinated, and so vaccines must be combined with maintaining other measures against COVID-19.

DPP legislator Kuan Bi-ling has called for stronger measures against human trafficking and illegal entry after the four Delta variant cases caught at the border who were migrant workers found aboard a boat attempting to smuggle them into Taiwan illegally.

There is increasing worry about whether Taiwan has enough vaccines for second-dose vaccination, primarily regarding AstraZeneca vaccines. The CECC has stated that more vaccines are expected to arrive in August, however.

In light of Chinese company Fosun having the executive distribution rights over BioNTech vaccines in the greater China region, concerns have been raised over China obtaining exclusive distribution rights for 29% of new pharmaceuticals developed in Taiwan. Such concerns were raised by the Judiciary and Organic Laws and Statutes Bureau of the Legislative Yuan.

Although Sanxia in New Taipei previously was allowing for vaccination for the elderly to take place without appointments, this has been halted. This takes place in light of concerns about inadequate supplies of vaccines for second-dose vaccinations. 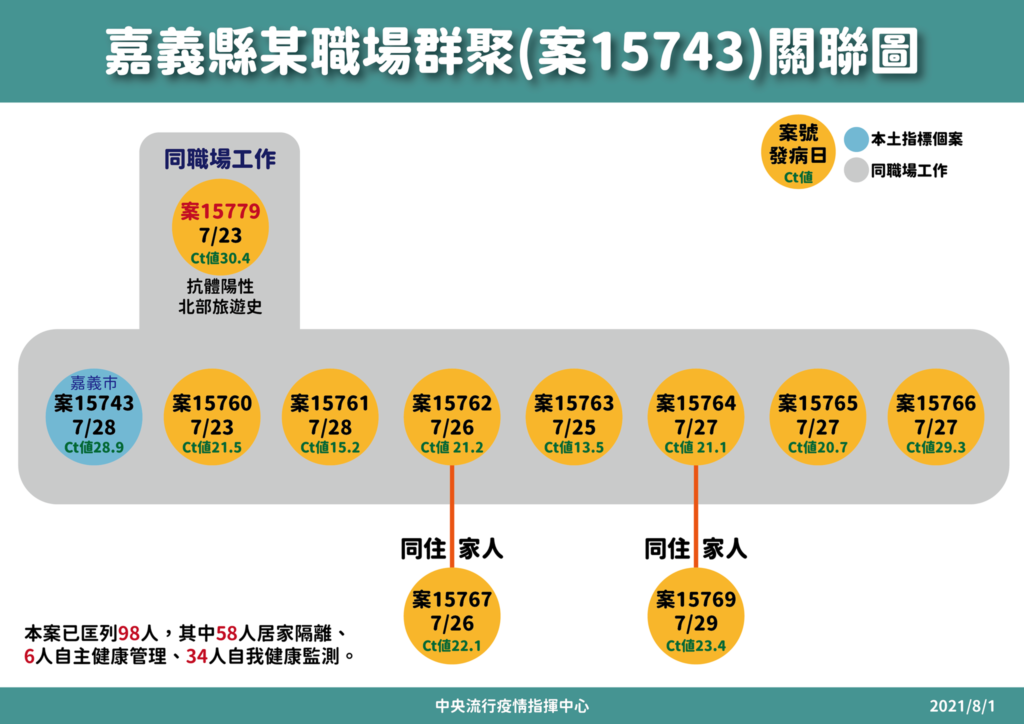 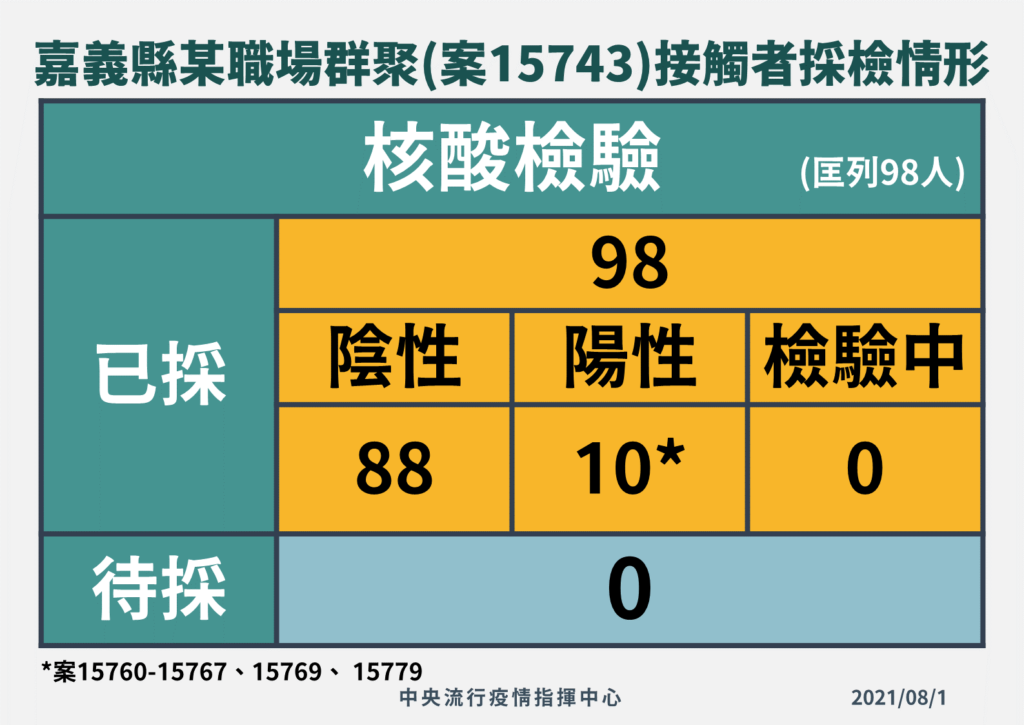 According to New Taipei mayor Hou You-yi—who along with other officials was wearing Atayal patterns during the press conference today because today is Indigenous Peoples Day—three of the six cases today were found while in home quarantine. One case has an unknown source of infection and is being investigated. Transportation is visibly up in New Taipei, with traffic on roads up by 63%, on the MRT by 40%, on buses up by 39%, on trains up by 40%, and on YouBike by 40%.

Hou cited statistics such as the rate of infection at testing sites to illustrate why New Taipei did not open indoor dining last week, while claiming that statistics such as the lower rate of infection at testing sites show that the situation is now safer. Tennis courts, basketball courts, and tennis courts will be opened up starting on August 3rd. The same will take place with libraries, though reservations must be made ahead of time, and capacity is limited to 80 individuals. Restrictions will not be lifted for markets despite the shift to level two.

Otherwise, Hou indicated that New Taipei would shift to a dual-track system for vaccination registration for those above 65. Whether conflicts with the central government remains to be seen, but this opens the door to other local governments pushing back against the vaccine registration system.