24 DOMESTIC CASES and one imported case were announced at the CECC daily press conference today. 12 of these cases were already in quarantine and two deaths were announced. Five cases have known sources of infection, four cases have unknown sources of infection, and three cases are under investigation. There were nine cases in New Taipei, seven cases in Taipei, three cases in Taoyuan, two cases in Changhua, and one case each in Taoyuan, Miaoli, and Keelung.

It has been over one week now that there have been less than ten cases with unknown sources of infection per day. As measures are relaxed, the CECC hopes for more detailed and integrated contact tracing, as a result of which a new contact tracing platform will go online today. This will allow for frontline medical personnel to have more information about contact tracing, as well as to examine data regarding hotspots. Data will only be retained for 28 days before being deleted. According to Minister of Health and Welfare Chen Shih-chung, there are still some transmission chains in the community, which means that Taiwan is not in the clear yet. 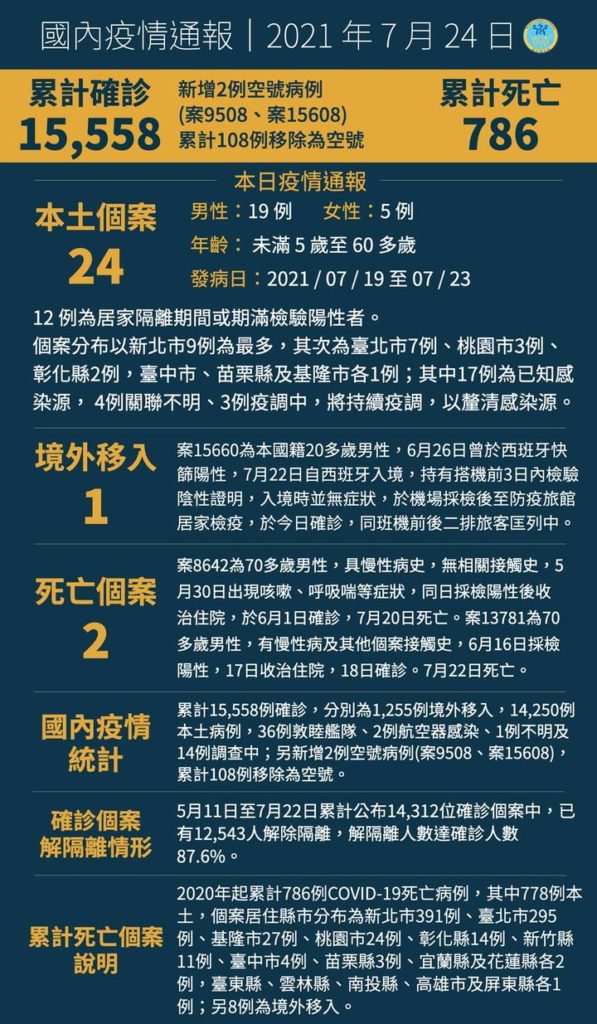 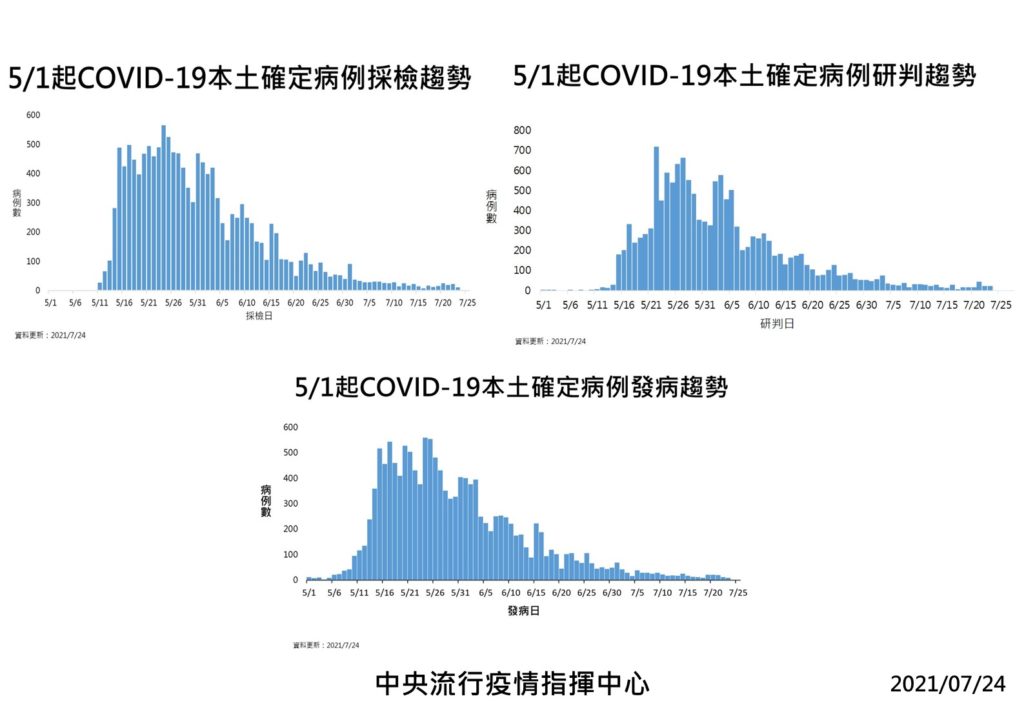 Information on the new cases from today (left) and further data released by the CECC (right). Photo credit: Ministry of Health and Welfare/Facebook

Taipei mayor Ko Wen-je and New Taipei mayor Hou You-yi still plan to close indoor dining in order to evaluate for at least a week, but Taoyuan, Keelung, Kaohsiung, Tainan, and Kinmen County plan to reopen indoor dining, with Taichung still evaluating. Some have called for national policy to be uniform in nature, but cases have been primarily confined to northern Taiwan for some time. Notably, cities that comply with the new measures are controlled by the DPP, while most counties and cities that have decided not to comply with the measures are controlled by pan-Blue mayors. 1.5 meters must be maintained between tables during eating and barriers set up between customers for indoor dining.

Massage parlors and tuina centers are among the establishments reopened. However, temperature checks for customers, health checks of workers, QR code contact tracing, and social distancing must be maintained. Workers must wear masks and gloves when dealing with clients. If cases are linked to massage parlors, they must be shut down and disinfected. There must be fifteen minutes between customers.

80% vaccination is needed for workers at childcare centers, which must submit their plan to reopen and may be inspected by authorities before they are allowed to do so. Workers who are not vaccinated or who have not had a full fourteen days after vaccination must have negative test results from within the last three days. Disinfections must be carried out twice per day, disinfection of bathrooms must be stepped up, and disinfections should also take place before and after meals. Children should take shifts during meals and they should use their own utensils and drink out of their own bottles, rather than sharing utensils. One worker will watch four children.

Hostels can carry out business, but disinfections must also be carried out regularly and workers must take shifts.

Babysitters should also monitor their health and avoid sharing utensils when taking care of children.

Long-term care institutions and hospitals are still not allowing visitors.

The CECC hopes to vaccinate teachers at least fourteen days before the start of the semester.

When asked about tabletop game centers and other venues that have stressed they can maintain social distancing measures, the CECC stated that such businesses can discuss with relevant authorities and considerations will be made.

The Ministry of Culture’s regulations are for 250 individuals allowed to attend outdoor events, which the CECC is allowing. Partitions and distance is to be placed between attendees.

It is easy for there to be gatherings in crane claw machine stores, so the CECC has measures to address this. Self-service laundries are hard to address, because some wait at the laundry store for their laundry to finish. The CECC stated that its regulations are principles to be kept in mind, since there are many circumstances to deal with.

The Ministry of Economic Affairs does not hope for eating and drinking to take place on buses, similar to regulations for trains, so this has been changed. The CECC is not ruling out rolling adjustments to measures.

The CECC called on clinics to maintain uniform policy regarding vaccination, when asked about some clinics attempting to charge registration fees for vaccines to make up for lost income.

The CECC will discuss with the tourism bureau about regulations for water activities. The CECC believes that it is more likely for there to be crowds at swimming pools, compared to outdoor beaches.

The CECC emphasized that, though the odds are low, it is still possible to get COVID-19 after being vaccinated. Nevertheless, there have only been five domestic cases of this to date, which is .004% of cases.

CECC did not have statistics today for how many pregnant women have gotten COVID during the outbreak, but there have been no deaths among them.

According to New Taipei mayor Hou You-yi, four of the nine cases from today were already in quarantine. Two cases were found at 1,251 tests at neighborhood testing sites. Hou stated that this week will be an important evaluation period for current measures and stated that New Taipei was currently still in “quasi-level three.” Crane claw machines and shrimp fishing establishments will not be opened after July 27th.

Taipei mayor Ko Wen-je stated that four of the cases from today in Taipei used dating apps and that dating apps were still leading to gatherings during this time. 1,155 cases yesterday found one case. According to Ko, this means that community transmission is low, though he called on the public to avoid parties or other gatherings. Ko claimed that it’s not clear when further vaccines will arrive in Taiwan, with BioNTech vaccines arriving in September at the soonest, and so it is not clear when Taiwan can get to 60% vaccination. Ko emphasized that Taipei is focused on maintaining current measures with as little resources as possible until vaccines arriving, stating that the Delta variant would eventually arrive in Taiwan.

Childcare facilities can open in Taipei after July 27th. Economic relief measures will be prioritized by the Taipei city government in the future government, with Wanhua receiving special priority as the most affected areas. Stalls in the Guangzhou Street Night Market and underground mall by Longshan Temple will receive 20,000 NT each.

Ko claimed that it was debated whether to prioritize widening first dose vaccination or to prioritize vaccinating the elderly with two doses and that 81% of deaths could have been avoided if the latter was done, but that this did not occur because of political reasons. Ko stated that he did not think it was fair for indoor dining to be prevented in Pingtung or elsewhere, even if greater Taipei does not allow for indoor dining. To this extent, Taipei city officials asserted that issues with vaccine doses near expiry returned to the central government and that the central government was only beginning to redistribute vaccine doses near expiry because this was already being done by the central government.

Three family members of an employee at the Vieshow in QSquare have become positive with COVID-19.

Restrictions will remain on funerals following the lifting of the level two alert, with members of the public called on to appoint a single representative to the funeral.

According to a tweet by Czech Senate president Milos Vystrcil, the Czech Republic is considering vaccine donations for Taiwan. 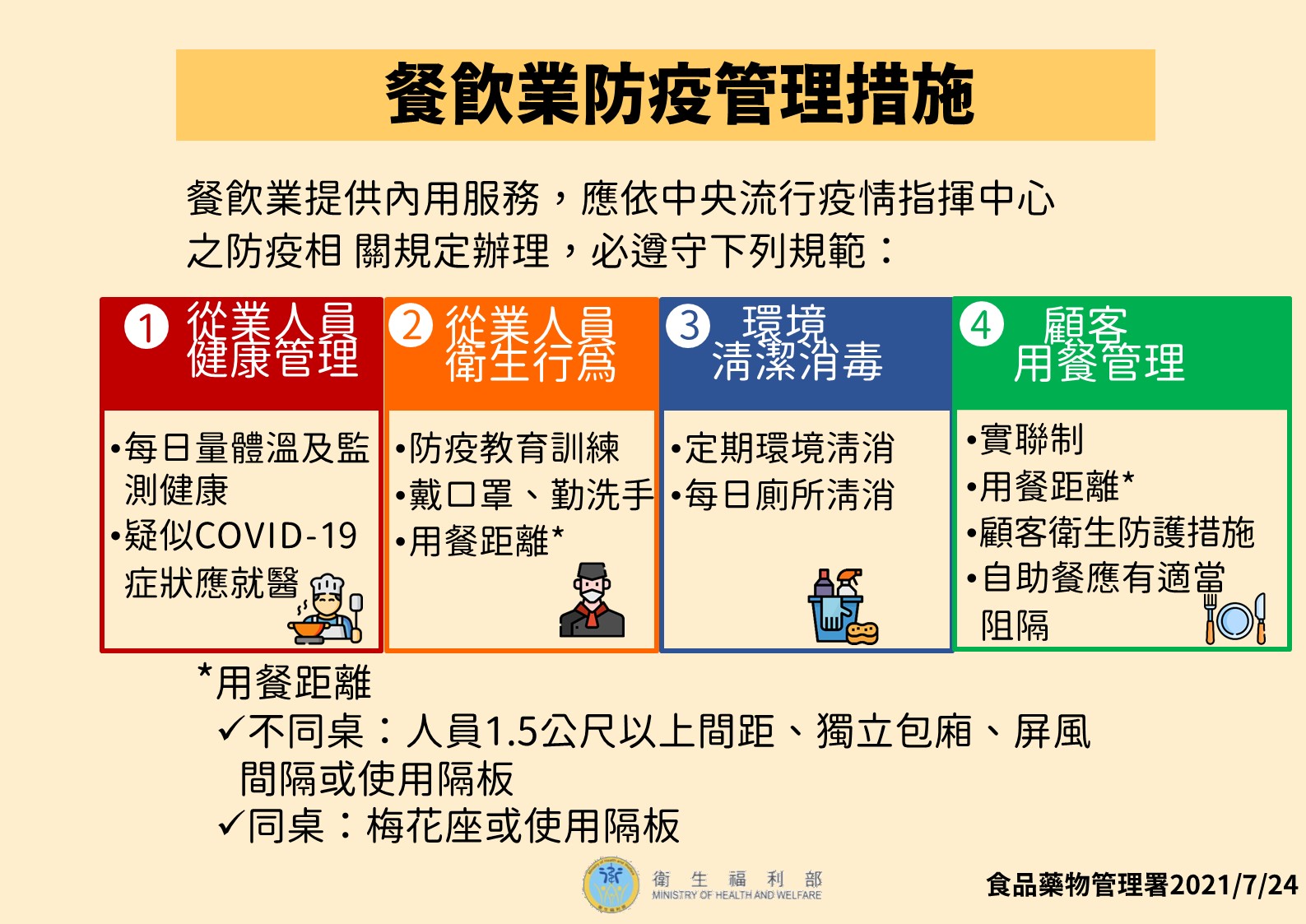 Information on measures for restaurants. Photo credit: Ministry of Health and Welfare/Facebook

Garbage disposal is up because of the current outbreak. In May, Taipei disposed of 10.79 tons of waste, compared to 7.05 tons one year before during the same time, while garbage disposal was up to 50% in New Taipei.

Home prices have also risen after the current outbreak, with home prices up by 6.1% compared to the second quarter of 2020.

250,194 vaccinations took place yesterday, with vaccination numbers down due to the typhoon. Taiwan is not at 26.05% coverage, which is 27.02% per 100 people. The CECC stated that 200,000 Moderna vaccines that were close to expiry have been reduced to 50,000 doses, and that the CECC will take back unused vaccines and redistribute them to individuals who have vaccination appointments.

When Chen Shih-chung was asked about accusations by Taipei mayor Ko Wen-je that Audrey Tang’s vaccination registration system is inefficient and has led to doses being close to expiry, Chen stated that this would not be as high as the number Ko claimed, which was 200,000 doses, and commented that Ko had stated inconsistent numbers as to whether it was 200,000 or 10,000 doses near expiry.